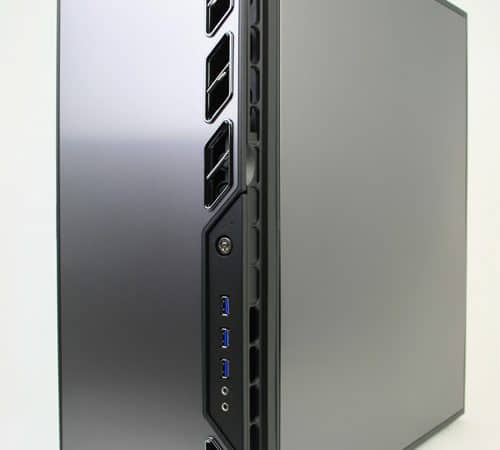 The latest Certifiably Silent PC from Puget Computers features an Ivy Bridge i7-3770K and an nVidia GTX670 gaming card. The SPCR Silent Certification should be a clear hint: There’s not much of a price in noise for this high performance gamer.

Puget Custom Computers is no stranger to SPCR readers, as the company has been
an active member of the SPCR Certified Quiet/Silent Computer Program for nearly
three years. During that time, successive versions of Puget’s Serenity PC SPCR
edition (and the mini variant) broke acoustic standards for SPCR Certified Computers,
not once but a couple of times. Puget does not mass produce systems; each system
is custom built to your order. The last refresh of the Serenity was the
i7 Sandy Bridge SPCR Edition, certified in January 2011: Its sound pressure
level (SPL) measured an astonishingly low 11 dBA@1m (the ambient floor of SPCR’s
tomb-quiet anechoic chamber) at idle and low load, and reached just 12.5 dBA
after an hour at absolutely maximum system load.

The latest Puget PC submitted for certification is called the Serenity Pro.
The chassis remains the same as in the Serenity, the proven Antec P183 in gun
metal finish, with an Asus socket 1155 motherboard and Intel i7 CPU. It differs
from the i7 Sandy Bridge SPCR Edition with component upgrades forced by the
short product life cycles in IT — an Ivy Bridge CPU instead of Sandy Bridge,
a Z77 chip motherboard instead of P67, and so on — but primarily in the
choice of graphics card. The last three generations of Serenity systems from
Puget all featured a fanless Radeon HD5750 with a fairly modest TDP of 86W,
which is what allowed the card to be cooled passively. The Pro has a much more
powerful graphics card, an ASUS GTX 670 2GB DirectCU II. This is one short step
down the very high performance nVidia GeForce GTX 680 card, capable of playing
the latest demanding 3D games at speedy FPS with high detail settings and screen
resolution. Its TDP is 170W, definitely a far bigger challenge to cool quietly
than the Serenity’s HD5750.

Here is a comparison of the components for the Serenity Pro versus the last
certified Serenity. As mentioned above, there are many differences, mostly subtle
and largely a result of ongoing product changes by component manufacturers.
The single biggest difference is the graphics card, which increases total power
demand by over 80W.

WHAT’S IN THE BOX?

The Serenity Pro sample arrived via UPS in the usual large carton Puget prefers.
Inside, the P183-housed system was securely packed in the original carton for
the Antec case. Double-boxing is Puget’s way of ensuring the system will arrive
unscathed through whatever UPS can throw at it in transit.

One of the most interesting extras Puget offers its customers is an email notification
when your system is fully assembled and tested, complete with photos of your
system, including thermal imaging shots of the system at idle and full load
that graphically show the effectiveness of their cooling. Here are the images
they sent of the review sample system.

INSIDE THE PUGET SERENITY PRO

The build quality of this system is similar to previous Serenity samples, with
AcoustiPack acoustic damping lining the inside of the top and side panels as
well as behind the front door, and neat cable management throughout. The overall
excution shows evidence of thoughtful care in system cooling and quieting. In
case there is any doubt, this is a heavy system in a solid case: It tips the
scale at 43 lbs.

This is the core of the SPCR certification for a PC. Many tools are used to
analyze the system:

The basic approach is to assess the noise, thermal and power characteristics
at idle, and then at full CPU and GPU loads. The testing was conducted entirely
in the SPCR anechoic chamber. Measurements under load were recorded 60 minutes
after the tests were started. This is an artificially long time for both CPU
and GPU to be at continuous 100% load; it simply does not happen in actual use
with real applications, even the most demanding 3D games. With the torture test
settings, Prime95 loads up an Intel CPU like no other real application, as does
FurMark with any GPU. Together, they represent a more extreme torture test than
used by 99% of PC system integrators.

One further challenge since our last Puget system certification is that all
the testing is now done at 30°C room ambient temperature. Electric space
heaters are used to raise the air temperature in the anechoic chamber to 30°C.
The heaters are then turned on/off as necessary to maintain that room ambient
during testing. The hot room pushes the cooling capabilities of any PC to extremes,
especially with the extended time of the artificial maximum CPU/GPU loads. This
was done in response to feedback from users in hot climates as well as vendors
considering participation in the SPCR Silent/Quiet PC Certification system.
Note that Puget actually cites 30°C as the recommended maximum operational
temperature for their systems.

Two other system states were added to the testing:

The Puget Serenity Pro SPCR Edition easily qualifies as a Certified Silent
PC. The measured sound pressure level of 11.5 dBA@1m at idle and 15 dBA at
full system load and 30°C room temperature is very impressive and unprecedented.
At idle, it is hard to tell that the system is on using only sonic cues, even
sitting next to it (with the system on the floor as it should be). The signature
of the sound at full load is smooth, a very subdued broadband whoosh.
At low load, the difference between the Serenity Pro and the Serenity will
be difficult to hear. At extended full load, it’s about 2~2.5 dBA@1m. Audible,
but subtle.

The Bluray playback test was added at Puget’s request. They worked with ASUS
to create an exclusive firmware for this Bluray burner, which keeps it running
at slower than normal speed in most conditions. It works: Even with the computer
sitting on the desktop close to the user, it is difficult to hear the Buray
drive actually working; there is hardly any audible difference from system
idle. Using fast forward at 32x made it slightly more audible but it was still
not more than a single dB increase.

When accessed, occasional chatter from the hard drive can be heard, but at
a very low level, with peaks getting no higher than 1 dBA@1m above the norm.
Placed on a carpeted floor under a desk, that chatter is all but inaudble
beyond 1m distance. The Antec P183 may be getting long in the tooth in some
ways, but there’s no denying the acoustic qualities of its composite-layered
panels and heavy internal frame.

The components stayed well under maximum safe limits through most the testing,
but under Prime95+Furmark, the CPU got close to Intel’s maximum safe recommended
temperature of 72°C. No throttling was seen, however, but users may want
to monitor component temperatures when running extreme CPU-intensive tasks
during hot weather. The GPU, on the other hand, never even got close to its
limits; it has over 20°C headroom. Heat-wary gamers need not worry while
playing to their heart’s content on this machine. All the other component
temperatures stayed very modest even under extreme load.

It is interesting to note that the maximum speed of the CPU was only 610
RPM even after an hour of Prime95+Furmark. In contrast, the fans on the Asus
Geforce GTX 670 2GB DirectCU II video card reached 2220 RPM during the same
test. This suggests the bulk of the noise increase at full load was caused
by the video card fans, and therefore, there is some leeway for Puget to adjust
the CPU cooling fan up a notch to improve CPU cooling without any noise penalty,
as any increase in CPU fan noise can probably be masked by the GPU cooling
fans.

The idle state AC power consumption of 76W is about what you’d expect for
a modern powerful gaming system. The maximum CPU/GPU load power of 270W AC
is higher than any previous system from Puget, but significantly lower than
the 320W of the AVADirect
Quiet Gaming PC with GTX680; that GTX680 is the obvious difference. Until
the GPU become seriously engaged, AC power draw is unlikely to exceed the
124W seen in Prime95. Power draw when shut down is an insignificant 0.3W.

No performance benchmarks were run on the system. The high performance of
the Intel i7-3770K is already well documented in the tech press; ditto for
the nVidia GTX670 and the Intel 520 120gb SSD used as the operating system
drive. There were no problem of any kind encountered during our testing. The
quick boot time of about 32 seconds (from power button press to actual usability
at the desktop) is excellent. Windows 8 Pro 64-bit has yet to be widely accepted
among power users, but all variants of Windows 7 continued to offered for
Puget PCs.

The Puget Serenity Pro SPCR Edition is a welcome addition to the stable of
SPCR Certified Silent PCs. It is meticulously assembled, provides very high
gaming performance, draws relatively modest power even at full load, and is
extremely quiet even our hot room torture test conditions. As with the last
two Puget systems, it is hard to imagine any setting where the system’s noise
would be audible in normal use. The ambient noise floor in any common
human habitation is louder by many decibels. The noise bar has been set to a
new low (as in limbo dancing) for a powerful gaming computer.

Puget’s practice of cherry picking quieter components from their shelves for
SPCR Editions remains unique. This careful selection service, the thoughtful
airflow and noise reduction design, and the high performance all combine to
make our fourth Serenity PC test sample truly impressive. It bears comparison
even with PCs that have no moving parts; some of them will actually have more
electronic noise (high pitched, sometimes intermittent whine) than the Serenity
Pro. You do pay a premium for all the careful design, component selection and
execution, but the sheer luxury of the end result is hard to better, and Puget
offers lifetime serice and support.