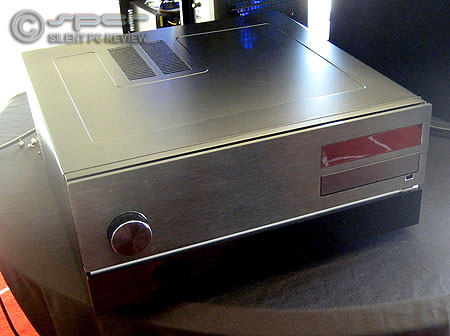 We’re trying something new with our Consumer Electronics Show coverage this year. Instead of a single big wrap-up article that tries to compress everything into one tidy package, we’re going to be bringing you daily show updates. With 2,700 booths and exhibits spread over 1.7 million square feet and jammed by 140,000 attendees and 4500 members of the press, we’re not even going to make an attempt at covering it comprehensively: Rather, we will try to glean the silent-pc related highlights from each days’ convention hall wanderings.

Per their usual, Antec forgoes the convention floor in favor of a private invitation-only
suite, this year at the Wynn. Our tour of their new products was led Antec’s
guru of design, Han Liu. 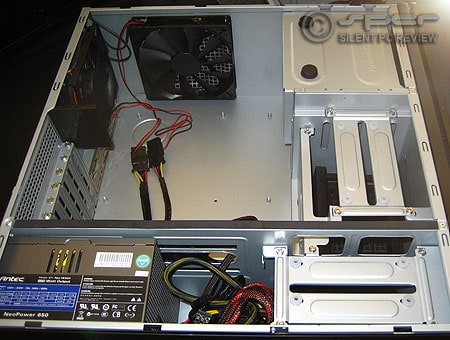 Seen first at Computex last July, the Fusion Max is the big brother to the
already popular mATX-sized Fusion. While they look similar and share a somewhat
similar layout, there are several important differences: First, instead of two
120mm fans on the right side, the Fusion Max has a single 140mm 11-bladed fan.
Second, Antec has added two dust filters to the bottom air intakes in the front
of the case, which should definitely help keep things clean. The filters can
be removed and cleaned easily, as they are removable notebook PC-Card style
through the front pop-down door, which also hides the reset button, plus FireWire,
eSATA, mic/headphone, and two USB 2.0 jacks. The power button remains accessible
with the front door closed. The front retains the dark gray aluminum finish
as the Fusion Black as well as the LCD display and single 5.25” with stealthed
cover. As a side benefit of the large ATX size, Antec was able to add two additional
drop down 3.5” bays, increasing the total to four. The PSU has been flipped
on its side, with a fresh air intake on the left side, as well as two rows of
vents to keep the expansion cards cool. 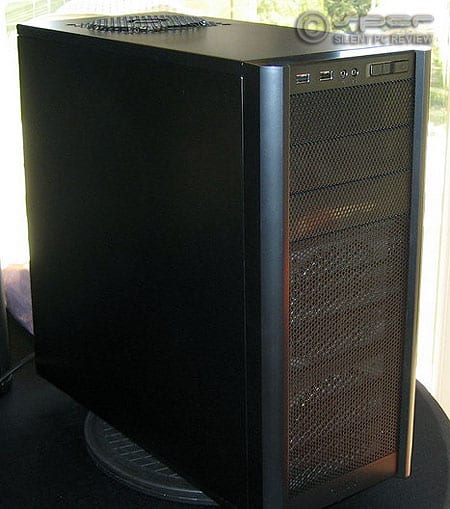 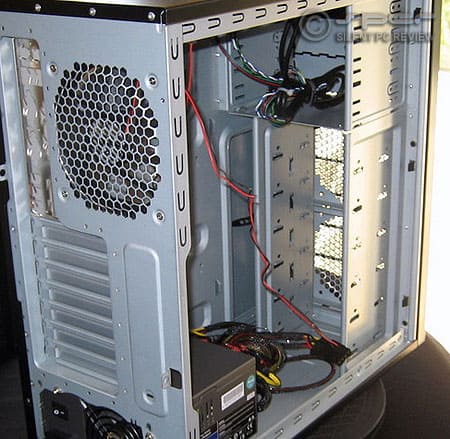 Next up, we have the Three Hundred, a value-oriented case that incorporates
some of the design features found in Antec’s higher-end chassis’.
Features include dual front mounted USB 2.0 jacks, as well as mic and headphone.
Fans include a top-mounted 140mm fan, a rear 120mm and the option for a pair
of 120’s behind the meshed and filtered front bezel. The interior really
shows the sacrifices made for value pricing: gone are the dual-chambers of removable
HDD sleds of the higher end cases, replaced with a simple throw-back optical
and rigid HDD mounting system. The price point of this unit is expected to be
in the neighborhood of ~US$60. 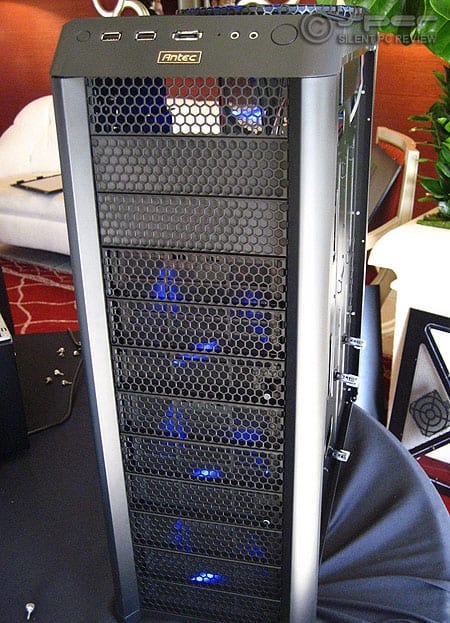 Just when you think that it can’t get any bigger, it does. For those gamers
for whom the Nine Hundred’s 9 drive bays just weren’t enough, Antec
brings the super-sized 12-bay Twelve Hundred. The design is nearly identical
to the Nine Hundred, with a few improvements. First, the 120mm fan on the windowed
side panel now has a slide-out, removable dust filter to keep your expansion
cards dust-free. Secondly, Antec has done away with the top mounted FireWire
port and replaced it with an eSATA port, continuing a trend with other recent
Antec product releases. Next, the hard drive cages have been upgraded in that
they now have dust filters as well as built in fan controller knobs for the
three 120mm fans mounted behind the mesh front. Behind the motherboard tray
we find the usual fare of cable ties and pass through holes. Just like the Nine
Hundred, there are fan control switches in the back for the rear and top fans,
but now you can also independently control the fans’ LEDs as well. 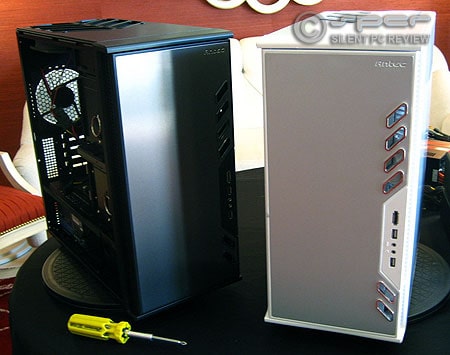 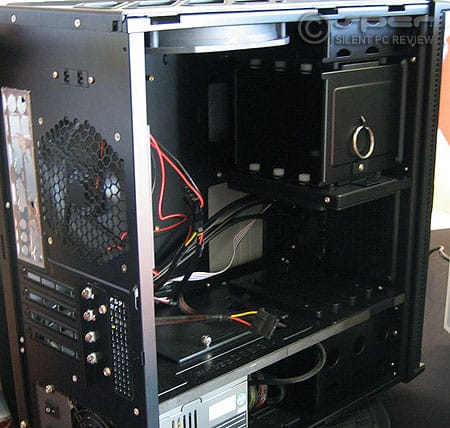 Finally, we have the Mini P180, another case that debuted at Computex; it is
now nearing retail availability. Again we have the eSATA front port instead
of a FireWire port, and a few stylish vents implemented into the front panel.
Everything about the Mini is nearly identical to the original P180, from the
double removable HDD cages to the large 200mm top TriCool fan. What’s new
is the mATX size. Because of the smaller size, Antec has decided to move the
vertical HDD mounted rack upwards, leaving the space in front of the PSU for
two 5.25” bays. That leaves one 5.25” bay at the top. Also, the Mini
P180 is available not only in the classic Black color, but now White. 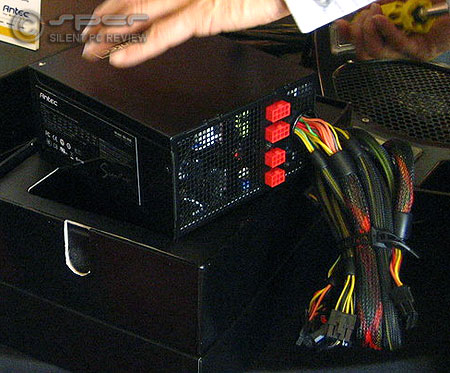 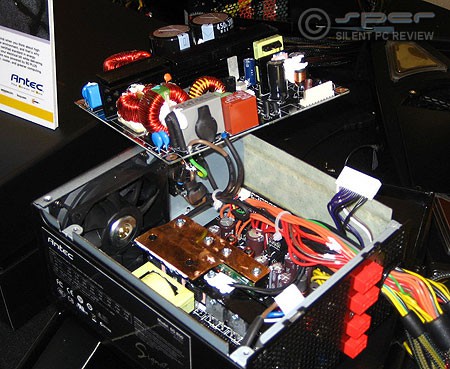 Outside of cases, we got to see was Antec’s new Signature series of premium
power supplies. Planned as the new top-tier of Antec PSUs, the Signature series
are 80-Plus certified, modular PSU’s
that represent a couple of firsts for Antec PSU’s (and perhaps consumer-level
PSU’s on general): The Signature Series will utilize a dual PCB layout
that holds motherboard-esque DC to DC conversions in place of the conventional
PSU step-down transformers, for improved stability during transient loading.
Another first is the use of PWM control for the 80mm fan, as opposed to voltage
ramping. Antec says that this will allow for lower fan speeds without fan stalling
at idle than is possible with current designs.

Over at Arctic Cooling, all the buzz was about their Accelero Xtreme, a heatpipe
GPU cooler cooled by a trio of 80mm frameless PWM fans. Utilizing five heatpipes,
the massive cooler is CrossFire/SLI compatible and also cools both memory and
voltage regulators. 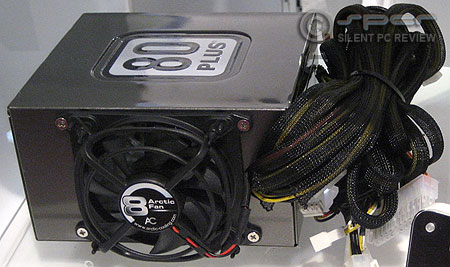 Another new item is their first 80 Plus certified power supply with its very
own 80mm Arctic Cooling designed fan on the outside. 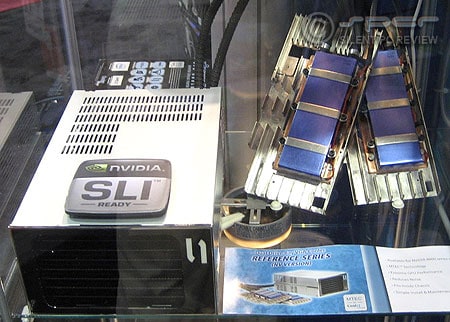 CoolIT was showcasing their new Reference system, which is a self contained
dual graphics card cooling system. There are both nVidia and ATI flavors, and
it occupies two 5.25” bays. While certainly not a silent cooling solution,
it is billed as being both quieter and higher performing than the stock cooling
would be for a pair of SLI’d high-spec GPU’s.