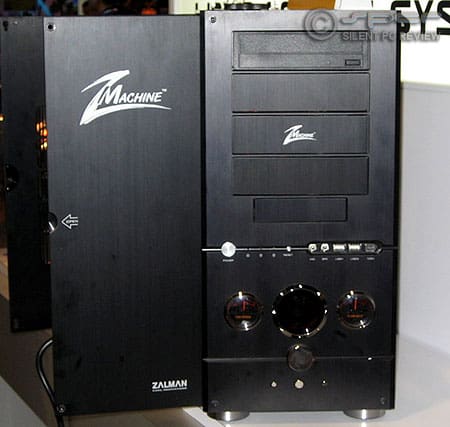 In our second two days at CES, we found a few interesting products from some names that are familiar to SPCR readers, as well as a couple of new and emerging technological players. 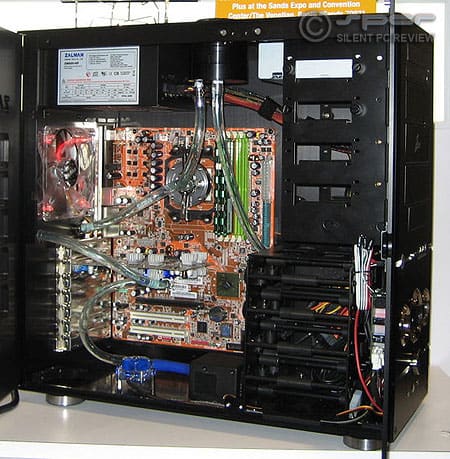 Zalman took their existing G1000 case and in place of its front mounted intake
fans added the front control panel from the Reserator XT. A thin but wide passive
reserator-esque radiator is located behind the motherboard to dissipate heat
out the back side of the case, and a fanned 120mm radiator is mounted on the
backside of the case at the exhaust location. The case will ship sans PSU, but
with pump, fans, and universal CPU water, with accessory GPU waterblock kits
being available for the common architectures.

Proving that you just can’t ever have a large enough CPU cooler, CM is
introducing a new line of coolers that draw inspiration, at least in naming
convention, from automotive engines. 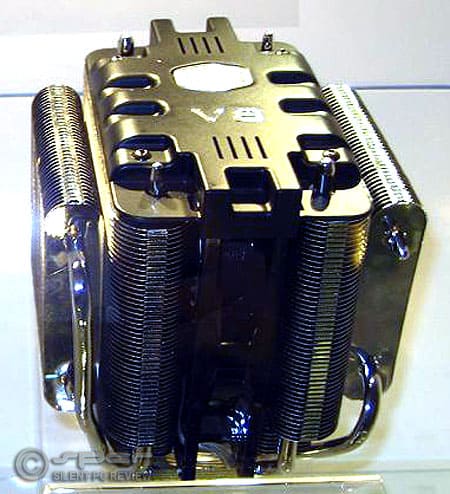 The smaller of the two is the fairly conventional V8. Eight double-ended heatpipes
funnel heat to a pair of fin assemblies that bracket each side of one of CM’s
19dba (claimed) 120mm fans. 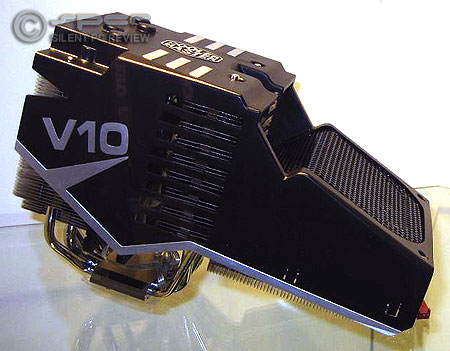 If the V8 is the tower 120mm fanned heatsink taken to its next logical step,
then the v10 is the same concept taken to its inevitable extreme. Six heatpipes,
a pair of 120mm fans, and three aluminum heat assemblies are ganged together
in a single massive unit. One of the fans is sandwiched between two of the fin
assemblies, and the other is cantilevered off the side, blowing downwards through
the third fin group and onto the MOSFETS, NB, and RAM. Details were a bit sketchy,
but judging just by picking the V10 up, it’s pretty certain that it sets
a new record for heaviest CPU heatsink on the market. It is at least, if not
longer than one foot. The particulars of the mounting system, once finalized,
will be very interesting. 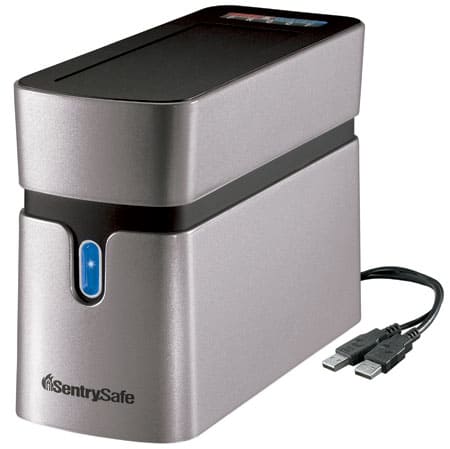 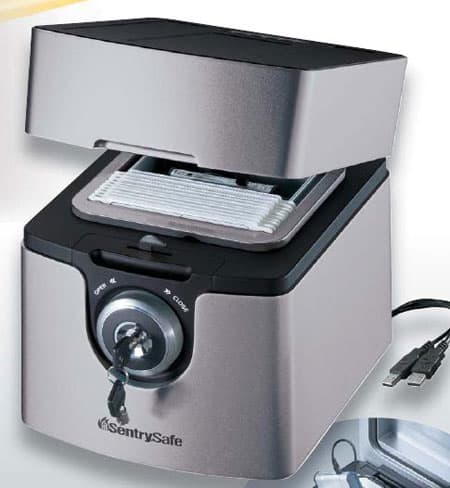 Sharing space in the Seagate/Maxtor booth was a small display from Sentry Safe
showcasing their first ever entry into the CE market. Long known for their home
and office document safes, Sentry Safe is recognizing that more and more of
our important documents are stored digitally instead of on paper. The Hard-Drive
unit encases a 160GB Maxtor 2.5” hard drive in a waterproof and fireproof
enclosure, while the CD/DVD file safe provides a fire safe environment for both
digital media and has internal ports for connecting an external hard drive so
that it can be operated while safely locked away inside. SentrySafe claims that
in spite of their robust protection the HDD’s in both boxes can be used
continuously without overheating. Why is this of interest to us? Because once
the 2.5” drives are enclosed in 10lbs of foam and aluminum, they are effectively
silent. 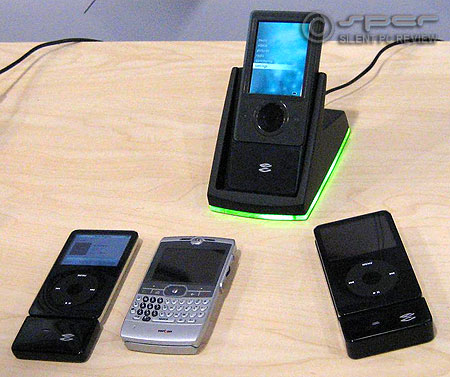 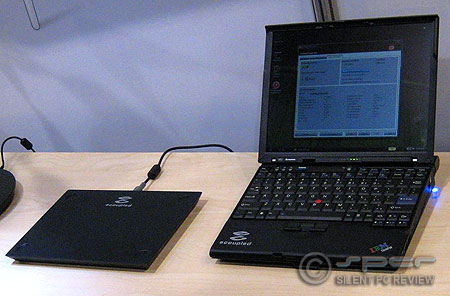 Finally, we have an interesting emerging technology from eCoupled, maker of
a wireless charging technology that is intelligent enough to wirelessly provide
the correct amount of power to various devices, anywhere from milliwatts to
kilowatts. They claim that their product is universal and can be adopted to
any application. All you have to do is set your eCouple-compliant laptop, phone,
iPod, etc. within range of the base charging station and the two devices negotiate
charge status and power requirements. Besides freeing you from the curse of
the wall warts and their tangle of cords, the technology has a green side: Once
the device being charged signals that it has reached its capacity the base shuts
down, eliminating the “phantom” power drain from electronic devices
that are not in use or are in standby mode. eCoupled is a subsidiary of the
multibillion dollar Alticor corporation, and has corporate agreements from nearly
50 companies in the CE industry, including big players like Herman Miller, who
are building laptop charging coils into upcoming office furniture lines, so
it has a reasonable chance of actually making it to the retail market.