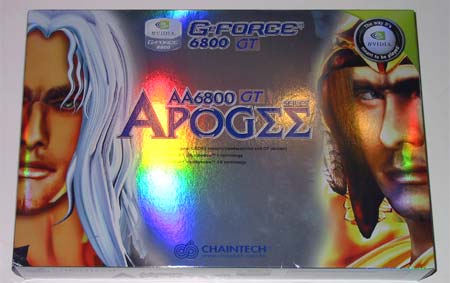 The NV Silencer 5 faces the challenge of taming a hot Chaintech AA6800GT Apogee gaming video card in our look at a second new video card cooler from Arctic Cooling. Is it up to the cooling challenge? And does it achieve cool quietly? We share our findings in a dual product review.

In a previous
review, we examined the combination of a Sapphire 9600XT VGA card and
the Arctic
Cooling ATI Silencer 2. It proved to be much quieter than the stock heatsink
and greatly improved cooling.

But how would the new breed of Silencers perform
when mated with a more powerful video card? To find out, we obtained a Chaintech
AA6800GT Apogee powered by an nVidia
GeForce 6800GT GPU. This sample came to SPCR as part of a new review program with Newegg, the on-line PC components dealer based in California.

One of the largest video card boxes ever.

The Chaintech 6800GT Apogee card is much more powerful than the Sapphire 9600XT used
in the previous ATI Silencer 2 review. As expected, it was also much hotter and, you
guessed it: WAY LOUDER! Can the Arctic
Cooling NV Silencer 5 help quiet it down while still providing the cooling
it requires? We are going to find out. 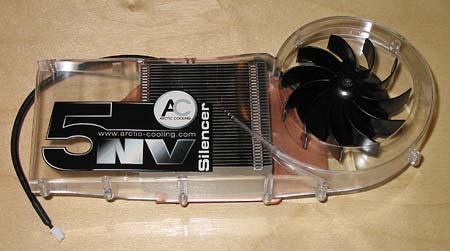 The Arctic Cooling NV Silencer 5 is made to fit the nVidia GeForce
6800 series. To help you determine whether the NV Silencer 5 fits your card,
Arctic Cooling has provided a height
restriction drawing on their website. The drawing indicates the location
of required mounting holes as well as they varying clearances necessary.

For those of you who plan to keep your video cards for a really
long time, Arctic Cooling has provided a (kind of silly) 6-year warranty.

The NV Silencer 5 is not much different than the other new AC VGA Silencers.
To get an idea of the similarities, please refer to our ATI
Silencer 2 Review. The NV Silencer 5 has a much larger (and heavier)
heatsink and copper base, weighing 430g. It also doesn’t have a passive
memory cooler because all of the RAM is on the GPU side of the card. The fan
on this Silencer runs at 2000 RPM.

The Chaintech AA6800GT Apogee is a very powerful card. Some of
the specs are:

One issue we had was with the ridiculous packaging size; unfortunately most
of the current high-end video cards have this type of packaging. The entire
contents could have easily fit in a box half the size.
Not only that, but the white cardboard box was encased in another box and it
even had a plastic carrying handle. 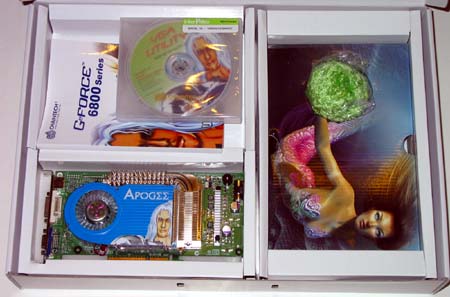 The 6800GT came with a variety of accessories, including:

Some accessories are useful, like the DVI to VGA adapter and various
cables. Others were simply confusing, like the “Q Ball” monitor cleaner.
Mike and I couldn’t even figure out what it was supposed to be. I thought it
might be some sort of stress ball. We knew it had to be important because it
took up half of the box and was being presented to us by a beautiful mermaid
who appeared to be suffering from ocular albinism. 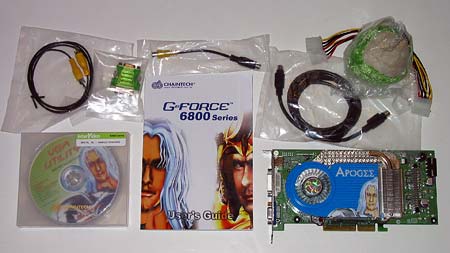 All the fixin’s: That green poofy thing is for cleaning your monitor.
Go figure.

The card itself is quite long which could interfere somewhat with
the airflow of certain cases. 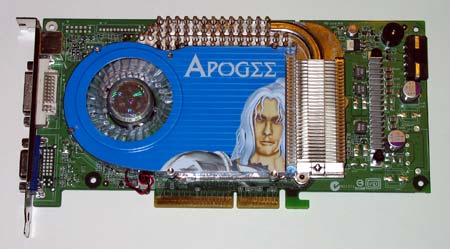 The stock cooler is reasonably effective, although unnecessarily convoluted. The cooler is made up of three main parts and
held together with about a dozen screws. A square, finned
copper heatsink sits on the GPU. A plastic shroud
fits over this main heatsink. It has a intake fan on one end and an exhaust
outlet on the other. The memory cooler is an L-shaped piece of aluminum which
has rods one end and fins on the other. The two ends appear to be connected
with a heatpipe — which is kind of useless because the heat isn’t moved to anywhere where it is more easily dissipated. 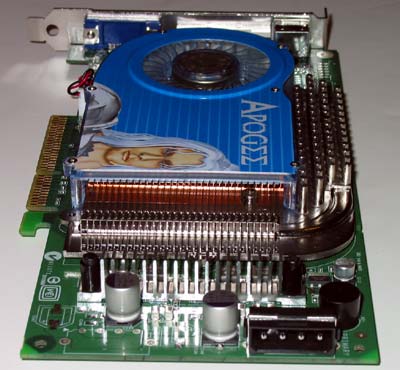 As with most other stock coolers, the cooler sends the hot air
back into the case. By sending the heated air directly out of the case, the
NV Silencer 5 should improve case temps significantly.

The installation of all the Silencers is quite similar. Please refer to our ATI
Silencer 2 Review for installation instructions. The only significant
difference is that instead of a large aluminum passive memory cooler, the NV
Silencer 5 utilizes a small, square backplate. 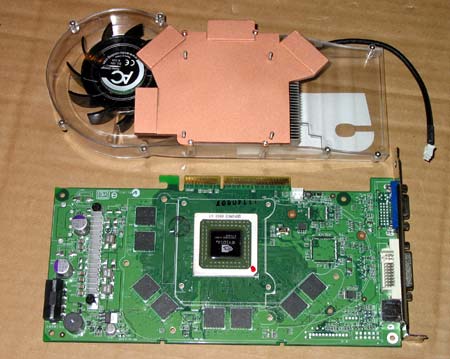 The bare card and the NV Silencer 5.

The system used to test the ATI Silencer 2 was called into service here again. Every effort was
made to minimize the noise level of the test system so that the acoustic aspects
of the NV Silencer 5 could be isolated, measured and heard clearly:

Despite all efforts, the Silencer’s recorded and measured sound levels can be expected to include at least 1 dBA of system noise, especially at the lower levels (~ 20 dBA/1m). 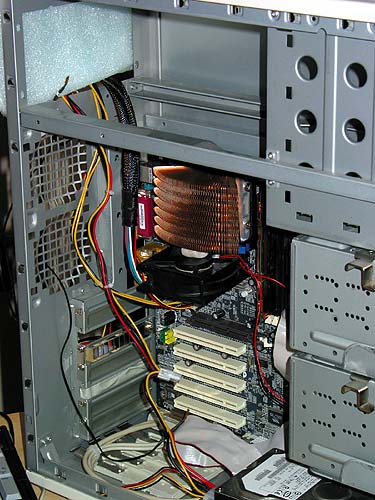 The Test Setup: The PSU was located outside the case;
the foam was placed at the PSU opening only to show the thermal sensor clearly.

With the case closed, the computer was left to idle for 20 minutes in order
to achieve a stable temperature. The After 3DMark temperatures
were recorded immediately after one complete cycle of 3DMark03 was run.

Sound levels were recorded with the case both open and closed. They were taken
with the systems at idle from a distance of 1m from the left side of the case.

The AA6800GT video card we used has two temperature sensors. The first was
the common “GPU Core” sensor. The second was the “Ambient”
sensor. We are unsure as to the location of the “Ambient” sensor on
the board. Please note that the “Ambient” temperature is not
the ambient temperature of the room within the testing took place. It can be
considered as being similar to a case temperature measurement.

As the 3DMark03 total score of 9527 indicates, the Chaintech AA6800GT is a very powerful video card. It looked pretty
darn good during the benchmarks, with the FPS staying at a reasonable level
throughout. The detail and textures displayed by the
6800GT were extremely impressive. A very nice card, except for the horrific noise level, which is plainly unacceptable for SPCR. The temperature of the core is not bad by GPU standards.

The improvement in noise level with the Arctic Cooling NV Silencer 5 is totally dramatic even run straight off the video card fan header, although plugging it into the Zalman Fanmate1 voltage controller makes for an even better result. Interestingly, even with the Fammate1 set to minimum, the cooling performance of the AC NV Silencer 5 is always better than the stock solution.

The sound of the NV Silencer 5 was recorded at different fan voltage levels
using a Zalman
Fanmate. Unlike the video card’s PWM (pulse-width modulation)
fan controller, a straight voltage controller was used to set the voltage. PWM
is a way to control fan speeds with minimal power loss.

With the ATI Silencer 2, the fan sounded smoother when plugged into
a linear voltage controller rather than directly into the VGA card’s fan header.
This is due to the effects of the video card’s PWM fan controller. Some bearing
noise was clearly audible whether driven by PWM or the linear voltage controller.
Unexpectedly, when we plugged the NV Silencer 5 into the Fanmate at maximum (10.5V), the
sonic signature was worse than when plugging it into the video card’s
fan header. We expect this is because at normal usage, the thermally controlled fan output voltage of the VGA card is substantially less than 12V. With the Fanmate set to minimum, the sonic signature was much better than
when plugged into the AA6800GT’s fan header.

The sound was recorded at our Fanmate’s lowest and highest settings, 5.7V and
10.5V respectively. For reference, we also recorded the stock cooler. The position
of the microphone was 3″ from the edge of the VGA cooler fan, out of the
air turbulence zone. The case cover was left off.

The Arctic Cooling NV Silencer 5 is quite successful as a replacement for the
AA6800GT’s stock cooler. It is certainly a quieter and far more effective cooler.
By running it off the Fanmate at minimum voltage, we were able to achieve slightly lower
idle temperatures than with the stock cooler. The temperatures at high load were even
better, dropping 4°C while reducing the acoustic output by some 15 dBA/1m! The noise reduction is probably enough to make many a gamer breathe a sigh of relief in any pauses between trigger pulls.

Those who want to achieve the quietest cooling of a hot video card may wish
to look to Zalman
or AeroCool‘s
heatpipe solutions combined with a very quiet 80mm fan, such as a Nexus or Panaflo,
which should provide better acoustics depending on your system and case particulars.
Those options will probably end up being more complex and/or costly and perhaps not as effective in cooling.

The Arctic Cooling VGA Silencers remain the only
VGA coolers to do the obvious intelligent thermal thing in this age of red-hot
VGA cards: Exhaust the heat out of the case. For this reason alone,
the NV Silencer 5 deserves serious consideration in a gamer’s quiet computing platform.

Our thanks to Arctic
Cooling for the NV Silencer 5 sample and to Newegg for
the US$415 Chaintech AA6800GT Apogee sample.