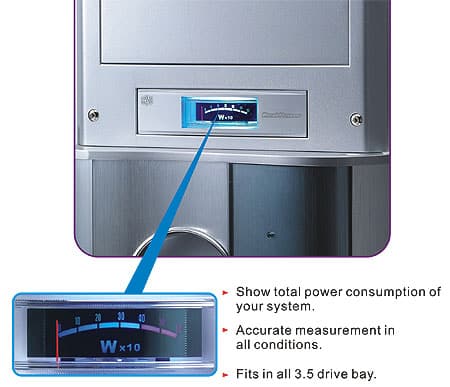 Yet another 120mm fan PSU, with a bit of a twist: As befits the brand, this Cooler Master PSU has a “Human Computer Interface” along with a blue LED fan for head-turning appeal. HCI turns out to be their marketingspeak for a power monitor. Our review digs into the essentials: Performance and noise.

The Real Power RS-450-ACLY PSU fits in well with other products from Cooler Master: It’s flashy and manages to draw attention to itself with fancy features. The brand is best known for stylish aluminum cases and heatsinks (not just of aluminum) but recently, Cooler Master seems to expanded their product range substantially. This 120mm fan PSU is the more powerful of two basic models offered. A 350W more conventional looking 80mm fan PSU is also offered in three variants: APFC, passive PFC and no PFC.

The unique feature of this PSU is a front panel power meter that is supposed to tell you the total system power draw. They call it the Human Computer Interface. It will be added to our usual range of items to be examined in this PSU. 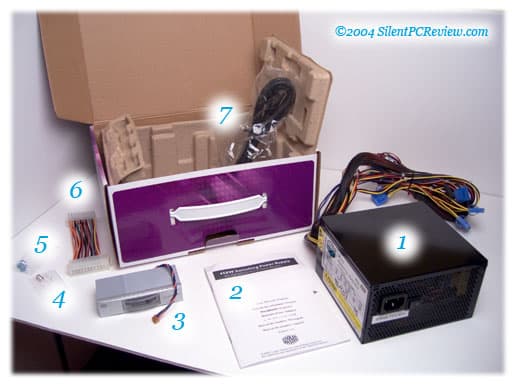 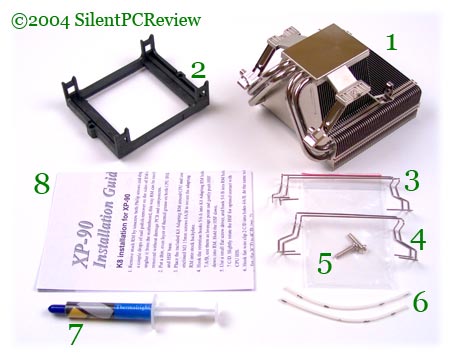 Another variant of this PSU, RS-450-ACLX, seems to eliminate PFC and the auto-range input VAC; it has a 110/220 VAC switch. It also uses a black colored “rifle” bearing fan instead of the dual-ball bearing. The MTBF (mean time between failure) is 100,000 hrs. Whether this is mostly due to the difference in the fans or in the AC input circuitry is not clear.

The RS-450-ACLY follows the familiar design used by most 120mm fan PSUs. A nicely open honeycomb pattern grill covers most of the exhaust side, which sports a power switch and the AC input socket. Because it has auto-range input , no 110/220 VAC switch is needed. A blue LED fan is used. 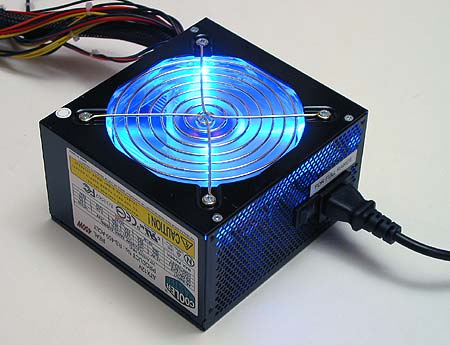 Blue light… presumably to illuminate the interior of a windowed case. 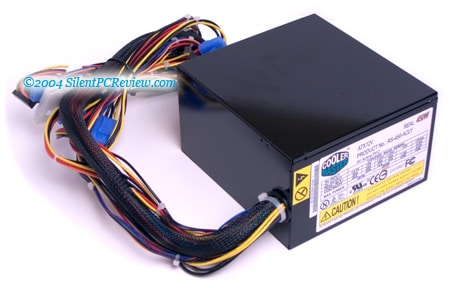 There are no vents at all other than the exhaust grill.

The cover is fitted very tightly, suggesting high mechanical integrity. The interior is quite packed, with fairly small heatsinks. An interesting feature is a piece of black plastic wedged between the heatsinks, behind the center yellow-topped transformer. It seems to be there to act as a 90 degree angle deflector for airflow to be directed towards the transformer and the exhaust grill. It suggests that there must be a significant degree of back pressure for the fan airflow — i.e., it bounces back towards the fan, reducing effective airflow and increasing turbulence. 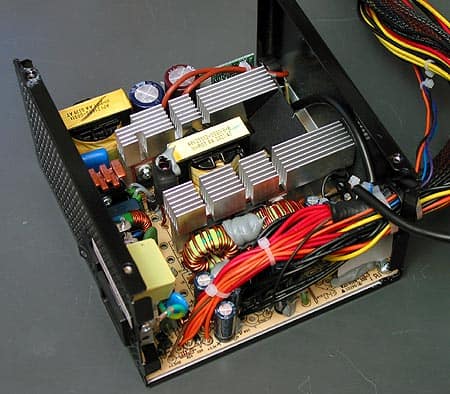 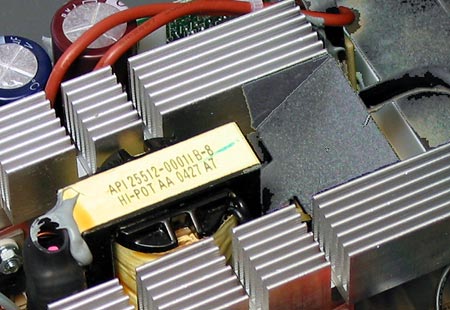 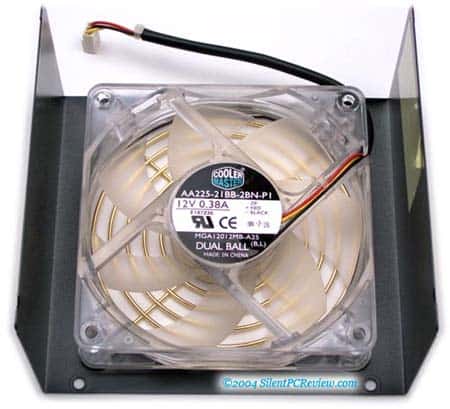 The fan is a Cooler Master brand dual ball-bearing, rated at 0.38A. This suggests high speed capability and noise.

There are a total of seven quite long cable sets.

The longest cable is almost a yard.

The familiar 4-pin plugs have been replaced by a blue colored version with side tabs that make removing the plug much easier. Instead of the usual rocking side-to-side that’s often necessary and totally awkward in tight spots after drives are installed, you only have to squeeze on both sides, and the tabs push against the mating connector to loosen off the plug. It works well. 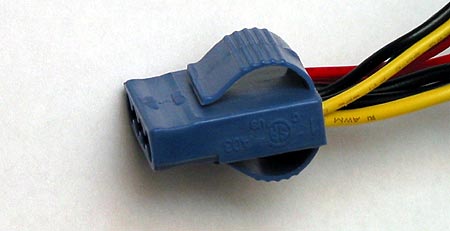 Much easier to unplug: Just squeeze the sides.

For a complete rundown of testing equipment and procedures, please refer to the
article
SPCR’s Revised PSU Testing System. It is a close simulation of a
moderate airflow mid-tower PC optimized for low noise.

In the test rig, the ambient temperature of the PSU varies proportionately with
its actual output load, which is exactly the way it is in a real PC
environment. But there is the added benefit of a precise high power load tester
which allows incremental load testing all the way to full power for any
non-industrial PC power supply. Both fan noise and voltage are measured at
various loads. It is, in general, a very demanding test, as the operating
ambient temperature of the PSU often reaches 40°C or more at full power.
This is impossible to achieve with an open test bench setup.

Great effort has been made to devise as realistic an operating environment for the PSU as possible, but the thermal and noise results obtained here still cannot be considered absolute. There are far to many variables in PCs and far too many possible combinations of components for any single test environment to provide infallible results. And there is always the bugaboo of sample variance. These results are akin to a resume, a few detailed photographs, and some short sound bites of someone you’ve never met. You’ll probably get a reasonably good overall impression of that person, but it is not quite the same as an extended meeting in person.

SPCR’s high fidelity sound recording system was used to create MP3 sound files of this PSU. As with the setup for recording fans, the position of the mic was 3″ from the exhaust vent at a 45° angle, outside the airflow turbulence area. The photo below shows the setup. All other noise sources in the room were turned off while making the sound recordings. 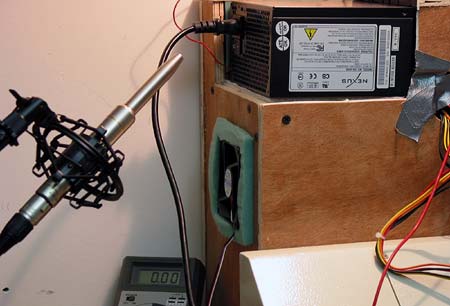 1. VOLTAGE REGULATION was excellent, within -/+2% on all lines in any combination of loads. The low and high voltage seen on each of the main lines is shown:

2. EFFICIENCY was excellent. The efficiency / power output ratio curve is quite flat — in other words, the efficiency is pretty constant, regardless of power load. It reached 80% at a very low 90W, which is really good. >80% efficiency in the 90~200W range where 99% of computers run most of the time is really great. The nice thing is that it stays there all the way to full power. This is top rank performance.

4. POWER METER or “Human Computer Interface”: The brochure is vague about what this meter monitors. Our testing makes it clear that it is an approximation of the total AC power (watts) drawn by the system. It reads about 10% too high through most of the power range. Realistically, the meter is not accurate enough to serve any function other than some visual entertainment and wow factor. Because it reports the higher AC power input rather than the lower DC power output, the meter may actually help to further promote the myth about systems needing great amounts of power. (Anyone who has read a few SPCR power supply reviews and the core article Power Supply Fundamentals & Recommended Units knows very few system can draw even 200W DC under maximum load. Most systems have long term average DC power draw of 100W or less. )

5. FAN, FAN CONTROLLER and NOISE: The test environment is live, so readings are higher than would be obtained in an anechoic chamber readings.

Subjectively, the Cooler Master RS-450-ACLY is fairly quiet at startup and modest power levels, but the dual-ball bearing fan’s sonic signature is not smooth. There is bearing noise at all speeds: Some buzzing and high pitched components even at the start voltage of just 5.5V. The measured and perceived noise level at this voltage level is low at 23 dBA/1m.

The fan speed ramp-up is almost entirely temperature related. That is, the output power load has less effect than the intake temperature when the fan begins to speed up. So the 9.7V and 32 dBA/1m recorded in the third column of the table above is more the effect of the 30°C intake temperature than it is the 150W load.

At the same 150W load, if the intake temperature was controlled to <29°C (by increasing the speed of the single exhaust fan in the simulation case), the voltage at the PSU fan remained at 5.5V, with no change in noise from the start level. Another example: If the PSU was started from cold at a 150W load, it took a while for the resistors in the PSU load tester (and the PSU itself) to get hot. So the fan voltage stayed at 5.5V for several minutes, perhaps as long as 5 minutes.

Once the >29°C intake temperature was reached, the fan speed tended to climb all the way to over 10V before backing back down as the high airflow pushed temperatures down. The 8.7V and 9.7V recorded for the 150W and 200W output levels were both more snapshots of the fan rising or falling in speed. In other words, the fan rarely stabilized at those voltages; they were points along a fairly steep slope in the fan speed / temperature curve.

From this behavior, it’s clear that the fan controller is set for aggressive cooling, and more as a on / off switch than a graduated speed controller. In the hotter, more power-hungry systems that a PSU of this power capacitywould be used, the fan may end up ramping up and down audibly as the fan control system “hunts” for thermal stability.

The Cooler Master Real Power RS-450-ACLY power supply has some laudable strengths. General power delivery capacity, stable line voltage regulation, and very high efficiency are among them. Its performance with those parameters is excellent.

The “Human Computer Interface” power meter really is little more than a selling gimmick, but it tells something. Just keep in mind that it reads AC input wattage, always a bit too high. The DC power consumed by your components is at least 30% less.

The new easy-off 4-pin connectors are welcome to anyone who has struggled to get one off an unwilling connection. So is the absence of the +3.3V cable and connector. It’s one less cable to put out of the way in the typical system. If you’re seriously into cable management, the long cables are probably better than short ones, but the downside is that there’s a lot of cables, and those easy-off connectors take up a bit more room as well.

It’s also nice to see the environmental effort of packing materials made of recycled cardboard rather than the usual plastic or styrofoam.

The <20dBA claim by Cooler Master cannot be confirmed. This is an overly optimistic figure.

This is the essential issue with the Cooler Master Real Power RS-450-ACLY PSU for seekers of quiet PCs: The basic acoustic character of the fan is poor, and the fan controller only makes a gesture at low noise. To take advantage of the high efficiency and strong power delivery performance of this PSU, a quiet PC enthusiast would want both the fan controller and the fan to be swapped or modified. This is not a simple matter. In this day of greater choices in components that are quiet right off the shelf, there are better choices.

Much thanks to Lucy at Cooler
Master for this Real Power 450 sample!