Corsair’s popular Carbide 500R is a prototypical performance case placing a heavy emphasis on compatibility and airflow. Critical to its success is a monstrous 20 cm side fan bathing the graphics card and other components in cool air from outside.

The Carbide 500R is one of Corsair’s more popular models, especially among enthusiasts looking for superb cooling. Available with either black or white sides/tops, the 500R is an ATX tower with a prototypical high-performance design at a reasonable US$110 price. The case focuses primarily on compatibility and ventilation. It’s wide enough to support big CPU coolers, deep enough to accept long graphics cards, and sports numerous fan mounts to accommodate extra fans and radiators.

The one obvious killer feature is the enormous 20 cm fan sitting on the left side panel. Situated on an fairly open mesh grill, it’s positioned over the expansion slots, allowing it to dump copious amounts of cool air over the most of the system. In particular, it blows over the graphics card, which is typically power hungry and the most difficult to cool component in enthusiasts systems. A side fan can be a double-edged sword though, as it sits at exposed vents, so there’s less material blocking the noise.

The side panels jut out, ostensibly to keep the side fan from interfering with tall CPU coolers and to provide more room on the right side to ease cable management. This gives the chassis a slimmer profile but I find the contours to be unattractive (perhaps it looks better on the white version). Its semi-glossy surface feels smooth to the touch but is just as smudge-prone as most matte finish enclosures. To further enhance its aesthetics, the side and front fans are transparent and sport white LEDs, but the lighting is entirely optional. The integrated three-speed fan controller can cut the lights with the press of a button.

The 500R’s accessories are stuffed in a white box sitting in one of the drive trays inside the case. It contains all the necessary screws, bolts, and standoffs, all separately packaged in plastic bags, a few zip-ties and cable hooks, and a USB 3.0 to 2.0 internal adapter for users with motherboards that lack an internal USB 3.0 header.

The Carbide 500R is constructed out of steel and that includes the front and top panels unlike most towers which typically use plastic for these portions. Corsair lists its dimensions as 52.1 x 20.6 x 50.8 cm or 20.5 x 8.1 x 20.0 inches (H x W x D), making its total volume a moderate 54.5 Liters. This is somewhat deceiving as it doesn’t account for the portion of the side panels that jut out — these extends its total width to 23.7 cm or 9.3 inches and total volume might be closer to 60 liters.

The internal construction of the Carbide 500R is generally good with a solid stiff feeling motherboard tray and 5.25 inch bays, and rolled edges along much of the interior. The drive cages however are on the thin side, not that well secured, and the fit could use some work as well.

The assembly process is fairly straightforward as all components are installed through traditional methods. There ample clearance for all components and plenty of space is provided for the side fan and the wires behind the motherboard tray thanks to the bulge-out design of the side panels.

It became apparent after the system was assembled that vibration from the hard drive was creating annoying intermittent buzzing noise. I squeezed some foam behind the drive cage to brace it and also applied some electrical tape along the sides of the drive tray to make it fit better, but the buzzing only improved noticeably when I pinched the handles of the tray together. A rubber band was employed to create the same effect.

Hooked up to the motherboard, the fans set to 50%, 80%, and 100% produce similar fan speeds as the built-in fan controller on low, medium, and high, which generate noise levels of 23~24, 31, and 34 dBA@1m, respectively. The medium and high settings are very loud, but not unexpected for a case that’s geared toward performance rather than noise. If you’re into quiet computing, you don’t want to go above the low setting. Also note that these noise figures are with all four fans — you can actually only connect three fans to the controller unless you employ a compatible splitter. 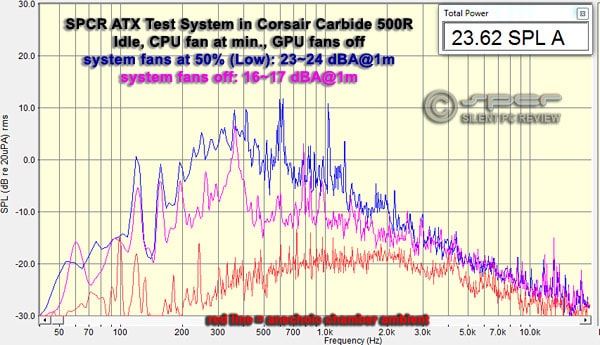 The 500R ships with three different fan types with varying acoustic properties. The plain black fan at the back has the best sound, emitting a fairly smooth profile but with some underlying clickiness. However, this effect is only audible from the back of the case, so most users won’t be able to hear it. The front fans are more tonal as the motor produces a distinct hum and it sounds buzzy overall. At lower speeds, these properties dissipate but it’s still rather rough. The big side fan has a more consistent sound but it’s more annoying, especially if it’s facing you. It generates a whiny, electric twinge throughout its range.

Thankfully, when the sound produced by all the fans are combined, their individual weaknesses are less noticeable but there’s still some resilient tonal elements that remain. It sounds okay up to about 50% speed but beyond that the side fan’s profile begins to dominate. The 20 cm fan is actually noticeably louder than the smaller ones when running at the same relative speed.

As the 500R is equipped with a massive 20 cm fan blowing over most of the components, the video card fans have an easy time, even when the GPU is on full load. With the system fans running at 30% speed the GPU fans needs to spin at 1210 RPM (only about 200 RPM more than the minimum speed) in order to keep the GPU at 80°C. Further increases in system fan speed take more of the burden off, while temperatures across the board fall.

Both 30% and 40% system fan speed produce a total noise level of 25 dBA@1m but the 40% setting is the sweet spot as it boasts superior temperatures. The machine runs even cooler with 50% system fan speed (equivalent to the built-in fan controller’s low setting) but this causes the SPL to increase, so it’s not possible to make the system any quieter, at least not under our testing parameters. Regardless of the fan speeds used, the machine is exceptionally well-cooled as indicated by the total system power draw. This collection of parts rarely pull less than 350W. Cooler running circuitry is inherently more energy efficient. 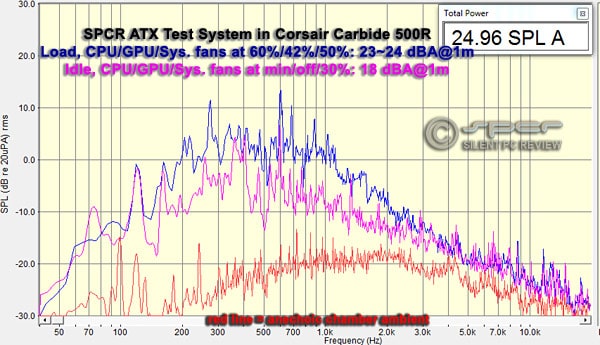 If subjective noise is important, the acoustic quality of the GPU fans is paramount as the open vent on the side does a poor job of masking them. Luckily, the Asus GTX 980 Strix’s fans have a relatively good innocuous sound, even when exposed to the outside. Thus, on load, the system sounds similar to our baseline tests only with increased volume.

Compared to recently tested US$100+ cases, the Carbide 500R in our optimal fan speed configuration is a bit on the loud side but its temperatures are excellent, beaten only by the SilverStone Fortress FT05 with its unusual rotated motherboard design and twin 18 cm fans. It’s tough for the 500R to hide the noise coming out the side and front of the chassis, but the giant side fan has a huge cooling impact that easily makes up for it. Also keep in mind that we measure noise from the left of the chassis and among the cases listed above, the 500R is the only one with an open vent on that side. The machine is somewhat quieter if placed on the user’s left side, but then the luminuous glory of the side fan’s LEDs would go unseen.

Being pushed as a performance case, the Corsair Carbide 500R certainly lives up to its billing. Airflow is key and while the front intake fans are restricted by its filter as much as a typical case, the substantial 20 cm side fan offsets this easily. Mounted to an open grill, it blows fresh cool air over the video card and the lower half of the board, resulting in the superior cooling for all the components, whether it’s the CPU near the top of the case or a hard drive installed all the way at the bottom. The top cover is also wisely fully ventilated as it should be to properly and efficiently expel hot air from a ceiling-mounted radiator.

Compatibility, another important factor, is handled well as there is sufficient space for just about any third party addition and plenty of clearance for cabling on the right side of the case. While it doesn’t go as low as I would like, the integrated fan controller is a welcome addition. The nonstandard connectors allow for the clever LED toggle feature, but it can be a pain if one of the fans or controller channels fails down the road.

With so many exposed vents, it’s not surprising the 500R is somewhat louder than most cases, but it wouldn’t be so bad if the fans had better acoustics. None of them sound particularly good, and the side fan produces an annoying high-pitched buzzing throughout its range. Tragically, the most effective fan is also the most annoying. Furthermore, it’s also the most difficult to replace as 200 mm fans aren’t cheap or plentiful. Hard drive mounting also needs to be more secure as the trays and cages fit against one another too loosely, resulting in unpleasant vibration-induced noise that require some fiddling to subdue.

The Carbide 500R is currently selling for US$110. At this price, it offers good value for users who prize cooling and compatibility. It unfortunately doesn’t hold quite as much appeal for most silencers as many of the case’s other aspects seem to have been neglected.

Our thanks to Corsair
for the Carbide 500R case sample.