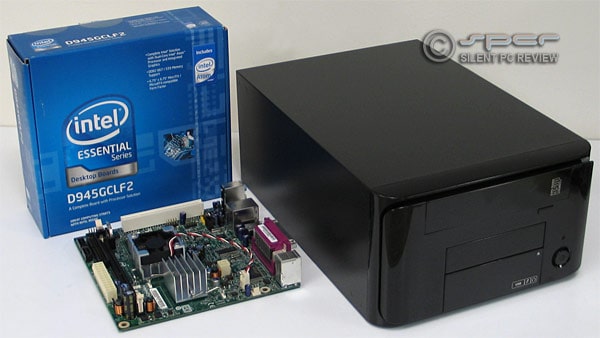 At first glance, the Corsair Obsidian 550D looks like a closed, airflow-starved, silence-oriented case. In reality, it incorporates a mix of noise reduction and performance features, giving it a hybrid nature similar to the Antec P280.

Corsair, best known for making memory and power supplies, has been manufacturing cases for some time now, but the Obsidian 550D is the first to grace our labs with its presence. It’s a fitting choice as it’s the only chassis in Corsair’s catalogue marketed specifically as a quiet product. At first glance, the 550D has the look of a plain, closed, airflow-starved silent case. In reality, it incorporates a mix of noise reduction and performance features, giving it a hybrid nature reminiscent of the Antec P280.

Though the Obsidian 550D comes packed in an unassuming colorless cardboard box, it’s nowhere close to a generic or budget case. Its current US$130~$140 street price places it at the higher end of the quiet case spectrum, in the same league as the Antec Solo II and P280. Aside from the usual styrofoam, there’s also a bit of extra cardboard protecting the side and front door. It’s a small gesture that we appreciate as we’ve received a few cases over the years with shipping damage.

The 550D measures 19.5" tall and almost 21" deep with its overall size falling between the Solo II and the P280. It’s a plain looking case aside from the brush aluminum door and the fan vent covers adorning the side and top. Like the Fractal Design Define R2/R3, it offers optional fan mounting points that can be covered when not in use to limit the noise exiting the case. The fan covers are attached using a simple push-to-release system (explaining the tape holding on the side cover during shipping) rather than unsightly screws. Notice the marks on the top right corner of the side panel — that was caused by sweeping away a small piece of dirt. The paint has a powder coated finish that is susceptible to smears and smudges.

The case accessories were contained in a small box stuffed into one of the hard drive bays inside the case. The included zip-ties, cable holders, and screws are all segregated and bagged separately. The 550D also ships with an internal USB 3.0 to USB 2.0 adapter, just in case your motherboard lacks a USB 3.0 header.

The interior of the 550D is adequately sturdy, particularly the hard drive cages, which have very little give. However, for a case in its price range, its side panels are noticeably anemic, only 0.6 mm thick. Thankfully there is a substantial amount of noise dampening foam lining the panels, making up for some of the structural deficiency.

The Obsidian 550D stock fans are quieter than most, each producing less than 20 dBA@1m. Rubber washers are also included on most of the placements to reduce vibration. We have no complaints about the fan acoustics — quite smooth, with only a hint of bearing chatter well-muffled by the case panels.

As the two intake fans produce the same amount of noise, we moved one of them to the top position to mix things up. The front position is typically the loudest, but in this case, the door shields it well, so it ends up sounding about the same as the fan in the rear. Putting a fan on top makes it slightly louder as the top panel lacks structural integrity; it hangs from a large, unsupported honeycomb grill making it susceptible to vibration. The combined noise level of the three fans is quite low, just 24 dBA@1m at full speed, 19 dBA@1m at 9V, and 15 dBA@1m at 7V. 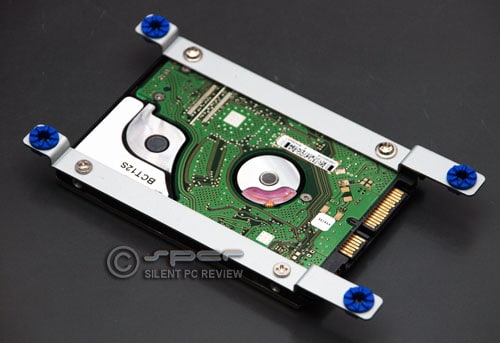 Our IGP test system measured a modest 20 dBA@1m with the CPU and system fans at 9V. On load, the CPU temperature rose by 21°C while the Southbridge barely heated up at all. There was no difference in noise level (the power supply fan might have ramped up but was drowned out by the rest of the system). Speeding up the CPU fan to 12V lowered the CPU temperature by 3°C and increased the noise level by 1 dB.

While our SPL measurements were low, we could hear a low pitched hum being generated by the system, likely the result of hard drive vibration. We could feel the vibrations in the case. Typically, this effect is caused by loose side panels and/or hard drive cages, but both are quite solid in the 550D. In this case, the culprit seems to be hard drive trays which don’t snap tightly into their cages.

With our IGP test system, the Obsidian 550D fared well against competitors. Though the noise level was 1~2 dB higher, the 550D had lower temperatures across the board. 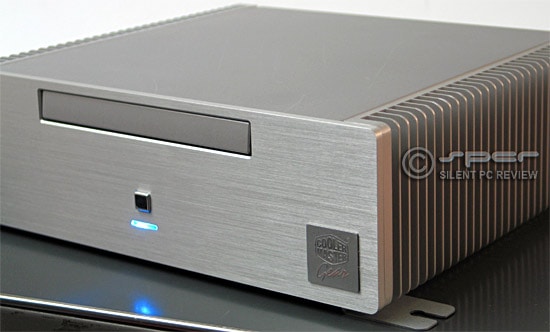 The addition of a HD 4870 (150W TDP) increased the idle Southbridge temperature significantly, but its fan spun at just 920 RPM, leaving the system’s noise level unaffected. The system heated up tremendously on load, but not as much as we typically see. Even with the stock fans at just 9V, the CPU temperature did not exceed 50°C. Cranking the fans up to their maximum speeds resulted in a 3°C and 2°C improvement in CPU and Southbridge cooling respectively. The extra airflow allowed the GPU fan to spin down slightly, so there was only a negligible amount of additional noise.

As a last test, we moved one of the front intakes to a top position to act as an exhaust. It didn’t make much of a difference. Southbridge cooling improved slightly, the GPU fan speed remained stable, and there was a slight increase in noise. The acoustics of the system at load was similar in all three test states, with the sweet spot being at 12V with the fans in their default configuration.

The HD 4870 stock cooler produces a noticeable but soft hissing noise that would be considered inoffensive by many, so while the system was 6 dB louder than the integrated graphics configuration, the noise level wasn’t too unpleasant.

Housing our HD 4870 configuration, the Obsidian 550D is competitive with the Antec P280, producing very similar thermal and acoustic results. It’s a decent showing for a quiet case, but doesn’t quite match to the Antec Solo II or the Fractal Define R2/R3. Both of these cases had cooler GPU and Southbridge temperatures.

The Obsidian 550D left us with a favorable impression of Corsair’s ability to manufacture quality cases. The 550D design is well thought-out with good attention to detail. The overall build quality is appropriate for the price, with the exception of the surprisingly thin side panels. Thankfully, the acoustic dampening foam adds some heft/stability, and the clever way the panels mount is quite secure. The front door is strong and easily reversed to swing from either side. The panels hiding the various fan placements are easily removed as well. Each one is equipped with nifty dust filters held on with magnets running along the sides. We’ve seen this before on the bottom of SilverStone cases but they were never as secure.

The case is well equipped from a silencing perspective. The power supply mount is padded at the bottom and the back, and rubber washers are provided for most fan mounts. Larger 14 cm fans are an option for all the fan mounts save the two at the front, and the the stock 12 cm fans themselves are quiet, with a good acoustic character. Noise-wise the only flaw is the looseness of the hard drive trays in the cages. The cages themselves are sturdy, but the flexible plastic caddies aren’t held on tightly enough, allowing hard drive vibration to affect the acoustics of the entire machine. A fan controller would also have been nice; it’s a notable omission considering how the case is being marketed.

Our other complaints are mainly aesthetic. The exterior has a matte finish, so it doesn’t attract fingerprints, but the surface is prone to scratches and smudges. Brushing away a small piece of dirt or grit on the surface results in a long powdery grey streak. We managed to scuff up our sample within minutes of taking it out of the box. The removable panels that hide the extra fan mounts are another issue. Their outlines are plainly evident, and the case looks worse when you take them off. Proper enthusiast cases are typically designed with these fan placements flush against the rest of the chassis, but when used on the 550D, it simply looks like something is missing. This is an unfortunate consequence of Corsair’s desire to make the 550D appealing to everyone, rather than just the silence obsessed. The release latch for the side fan compartment also sticks inward a fair bit, limiting the height of some third party CPU coolers.

Despite its flaws, the Obsidian 550D’s performance is good compared to other cases marketed to the noise conscious . It did particularly well in our low power IGP test system, where it was on par with past favorites, the Antec Solo II and Fractal Design Define R2/R3. It couldn’t quite match either case with our our single mid-power video card test configuration, but did manage to post respectable numbers similar to that of the Antec P280. This isn’t surprising as the P280 has a similarly spacious design that attempts to bridge the divide between silence and performance.

The Corsair Obsidian 550D is currently priced at ~US$130 at various e-tailers while the Antec P280 can be had for a little less. The 550D is smaller by about 10L in volume, has more numerous and larger fan support, and the ability to remove a hard drive cage to accommodate an extra long graphics card. The main advantages it holds over its competition are cooling rather than noise related. If you’re looking for a quiet case, the Obsidian 550D certainly fits the bill, but it’s not worthwhile for housing a minimalist system as much of its functionality would be wasted.

Our thanks to Corsair for the Obsidian 550D case sample.