Two terms that often come up in Silent PC Review are undervolting and underclocking. These terms refer to setting the CPU core voltage and clock speed under the default settings in order to lower its heat output and make it easier to cool with a quiet, low speed fan. Computing performance does take a hit, but CPU temperature can be lowered dramatically, making it much easier to obtain quiet operation.

Two terms that often come up in Silent PC Review are undervolting and underclocking. These terms refer to setting the CPU core voltage and clock speed under the default settings in order to lower its heat output and make it easier to cool with a quiet, low speed fan. Computing performance does take a hit, but CPU temperature can be lowered dramatically, making it much easier to obtain quiet operation.

Most of you are familiar with overclocking, which refers to running the CPU over its normal rated clock speed to extract the maximum possible performance. In conjunction with overclocking, the CPU core voltage (Vcore) is sometimes raised above default to stabilize a highly overclocked CPU. Both have the effect of raising temperature not only in the CPU, but as a result of the increased temperature of the air around it, the entire case. This is the exact opposite of what is desirable for a quiet or silent computer.

Clock speeds and core voltages are easy to set with modern motherboards. Recently released (~2 years) motherboards feature software control of hardware settings in the BIOS. These settings include CPU clock speed, system front side bus (FSB) speed, independent PCI & memory bus clock speeds, and Vcore adjustments. Separate bus speeds for FSB, memory and CPU allows all components other than the CPU to remain at or close to default speeds. (Many PCI peripherals are not happy with more than 5~10% deviation from the default settings.) Naturally, the degree of BIOS control varies from model to model and chipset to chipset. The most recent ones aimed at enthusiasts are the best; look for a motherboard that has a wide range of BIOS-accessed hardware settings. 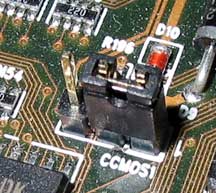 Older motherboards generally do not offer as much control, and some settings can be set only by physically moving jumpers on pins. With modern motherboards, the only one you absolutely need is the CMOS clear jumper. This is how you reset all the BIOS settings to their defaults when you lock up the system with settings outside the operational range of your particular set of components (CPU, motherboard, memory). Fortunately, this throwback to ancient times remains featured on every motherboard. 🙂

Bypass the Multiplier Lock if Possible

Almost all desktop CPUs are clock-locked. Intel started the practice soon after the first generation of Pentiums to stop overclockers and have continued since. AMD started the practice with the Athlon. The lock on the processors is specific to the multiplier. Still, even with a locked multiplier, CPU speed can be changed with the front side bus (FSB) on the motherboard. With Intel processors, adjusting FSB is the only way to change the CPU speed. 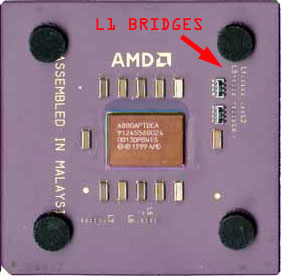 With AMD Thunderbird, XP and MP, it is possible to close a set of tiny terminals etched on the CPU casing to unlock the multiplier. This is well-documented on many overclocking web sites; a google search will bring up a handful. Once unlocked, many combinations of bus speed and multiplier can be tried with the CPU. It almost guarantees good over- or under-clocking success. For T-birds, multiplier unlocking can be achieved with an ordinary sharpened pencil. With XPs, AMD made it a harder. The trick requires techniques with materials more permanent than pencil carbon, and a small slip can render the processor useless. (An expensive trick!) Still lots of people to do it successfully. Leo, for instance.

The utility Radiate is useful and educational to play with. It’s kind of a packaged graphic interface for a handful of formulas that calculate the relationships between CPU clock speed, Vcore, and power consumption. (It also predicts CPU temperature with any given ambient and correct C/W of the heatsink used, but this is not relevant here.) The utility is accurate; its calculations were confirmed against CPU spec sheets.

Here is an extreme undervolting and underclocking example with a 1 GHz T-bird unlocked over a year ago. It accepts a wider range of underclocked (and overclocked) speeds now than when it was new.** (See note at end of article)

The ABIT KT-7A(R) motherboard BIOS provides complete software control for all hardware settings. Hitting the Delete key at the beginning of the boot process as the screen is just starting to display accesses the BIOS menu . The CPU adjustment menu item is SoftMenu III. This menu screen provides options for CPU bus and multiplier speeds, CPU voltage and fine details of memory performance. It is shown below with all CPU setting at default for the 1 GHz T-bird: 10x multiplier, 100 MHz FSB with 33 MHz PCI clock, and Vcore at 1.75V. 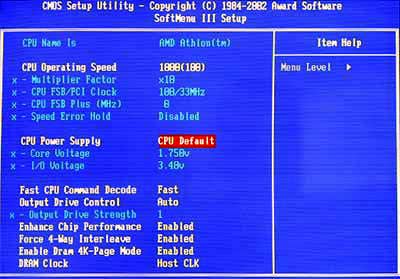 At default settings, the 1 GHz T-bird is rated to draw 49W typically; 54W max. Since the unit is unlocked, its clock speed is completely controlled by the motherboard. Even at the stock 1 GHz clock speed, the CPU runs fine with ~.25V less than the default voltage. But what’s the coolest it can be run at?

The minimum speed allowed in the BIOS is 5X multiplier with 100 MHz FSB. This is 500 MHz, half the T-Bird’s normal speed. Let’s see if it boots with the minimum Vcore of 1.1V. The handy utility Radiate calculates power dissipation will be 10.2W. Cool enough to run with no fan!

Tried 1.1V, 1.2V, 1.3V, 1.4V, and finally, after a last attempt at 1.5V, tossed in the towel. This clock speed appears to be below the operating limit of the system, for whatever reasons. 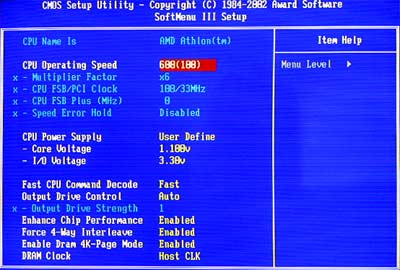 No problem! The system boots on the first attempt and is stable. Motherboard Monitor 5 indicates the measured Vcore to be 1.17V. What does Radiate calculate? Just 13.8W! The table below details other significant differences. Both AC power and temperature measurements dropped dramatically.

Before and After Underclocking

* As monitored by in-socket thermistor on motherboard. Usually read 10~13° C lower than the temperature in the CPU core, which has a maximum safe temp of 90° C.

What is the performance cost? Some benchmarks from SiSoft Sandra (V. 2002.1.8.59) are shown. All BIOS settings were left at defaults at both clock speeds. Tweaking memory timing and a few other BIOS settings would likely improve the scores at least 10%.

The performance hit is 40% across the board, exactly the same as the change in CPU clock speed, except the the memory bandwidth, which is affected by the bus speed, not the CPU clock, per se. How do these numbers translate in terms of what I like to call the computing experience? In other words, how much impact did it have on my perception, productivity and enjoyment while working with the system?

The answer depends on what task was being done. With most business and work related applications, web browsing and e-mail, there was little change. The exception was Photoshop and some electronic publishing software, in which some operations took noticeably longer to complete. Multitasking, in general, was also somewhat affected. Multimedia did not strike me as anywhere close to 40% slower. With a few games, the system felt more sluggish at 600 MHz, but again, I could live with it. A faster video card would probably be a big equalizer. Overall, I could live with the system either at default or underclocked. Naturally, I prefer the higher speed.

But it’s not an either/or choice. Many CPU speeds between 600 MHz and 1.0 GHz can be reached, with a range of multiplier and bus combinations.

All of these suggest that to achieve lower temperatures with the minimum performance hit, the best approach is to:

The last point really is the crux of undervolting and underclocking: reduce CPU heat to lower cooling requirements, allowing the use of quieter fans. CPU temperature at maximum needs to be in a safe zone; it really doesn’t matter how this is achieved. By reducing the heat output of the CPU, you have that much more headroom to use quieter fans. Generally, the airflow required for effective case cooling also drops, which means the case fans can be made to run more slowly, replaced with slower quieter ones, or removed altogether.

A few more points in closing:

** A processor that has been used for a while, especially one has been used hard (read: overclocked and/or used for lots of demanding games), may be more accepting of non-standard speeds than one that is new. This applies to operation at both over and under normal settings. This is my experience with most processors I’ve used. It may be a side effect of electromigration at an early stage. All this is little more than conjecture.