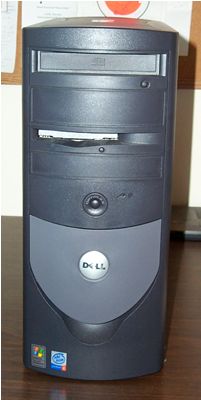 This photo essay and review of a Dell system by contributor Michael Hipp appeared originally in February 2002 on his personal website. We felt it worthwhile to update and reprint here for those who are seeking ready-made quiet computer solutions. Michael’s first line tells you why.

Editor’s note, June 7, 2002: This review of a Dell system by contributor Michael
Hipp appeared originally in February 2002 on his personal website. We felt
it worthwhile to update and reprint here for those who are seeking ready-made
quiet computer solutions. Michael’s first line tells you why.

The Dell
OptiPlex GX240 is the quietest commercial system I have ever used. This
page is a short photo essay to show some of the features that make it so.

The OptiPlex GX240 is available in a range of configurations, including small
Small Form Factor and Small Desktop cases. I chose the more traditional Mini-Tower
Chassis.

The specifications of my particular model:

Unlike HP, Dell still does not specify noise ratings in its technical specifications
for any of their PCs.

The system came with Windows 2000 SP2 pre-installed. Yes, I know it’s not
Linux, but it is the best Windows MS ever made. And repeat after me: “Microsoft
Windows XP: Just Say No.”

Note that the steel chassis is completely enclosed in plastic. Even the drive
doors as well as the bottom, top and sides. Some suggest that a covering of
plastic (or other sound-absorbing material) is the best starting pont for a
truly quiet system. I have heard that Dell cases are made by Palo Alto (?) of
CA. Any information about this would
be appreciated.

The only exposed metal is at the rear, and even the edges of the back are covered
in lips of plastic. Although the Dell uses stamped metal grills over both fans,
much of it is small enough to cause little turbulence in the airflow (turbulence
= noise).

Note the PSU (power supply unit) fan at the top and the processor/case fan
below it. These are the only fans in the unit. Both are very quiet.

The case seems extremely well built and has an innovative swing-apart construction.
Note the large hinges on top and bottom. This makes every internal component
easy to access (drives, motherboard, PSU, memory slots, expansion slots). I
believe this system is probably one of the best in terms of ease of access to
internal components. 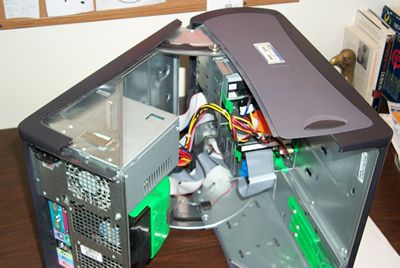 The drives are all mounted using plastic rails that allow them to slide to
the rear. These plastic rails likely contribute somewhat to vibration dampening.
They certainly make maintenance of the drives easy.

This is it’s best feature, IMHO. The green plastic item is a hood that swings
over the P4 chip and heatsink. There is no fan on the heatsink.

The large 92mm fan that mounts on the rear of the case draws air up through
this hood and across the heatsink. It acts, apparently, not only as a chip cooler
but also as a case fan.

Notice the video card (AGP) in the foreground with no fan and also the northbridge
chip between it and the processor. It also has no fan. 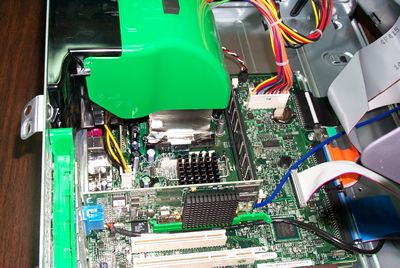 A bird’s-eye view with the hood tilted up (it is hinged). The
stamped sheet-metal P4 heat sink is now visible. 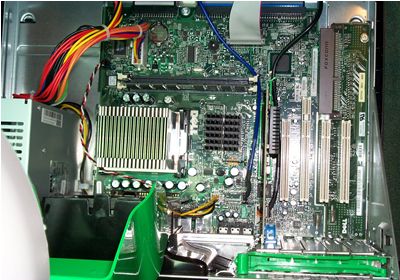 Note in the photos above you can see the power supply. It appears
to be a standard ATX unit but I have been told that Dell PSUs are not ATX and
if you replace it with an ATX unit, it will install correctly but will fry the
motherboard. (Note from a helpful contributor: The following link might be of
interest. It claims that Dell stopped using standard mobos and psu’s in 1998,
and details the wiring Dell now uses. http://165.193.123.52/articles/upgrade3_01_01.asp.
Apparently an adapter is available from http://www.centrix-intl.com/
under “OEM Replacement”).

Another lesson: This system with a P4 1.7GHz processor would,
as of this writing, still be considered a high-end unit and it has a normal
complement of options inside. But the PSU is only rated at 250W according to
the label. I do not know why so many sytems are being built with 400 and 500W
power supplies (or more) in simple desktop units. Tremendous overkill, surely.

Another view of the rear of the system: 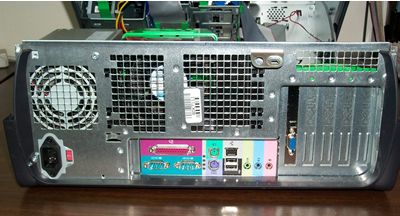