This addition to our archive of articles on dealing with the noise and heat of hard drives was made possible by the careful experiments of Philip Dayson. More insights on effective cooling of hard drives. Hint: Neither the top nor bottom of the drive is the hottest part!

The
hard drive silencing techniques discussed here previously include sandwiching
between aluminum plates and decouple-mounting
using elastic. The topic of this article is somewhat related to both of these
techniques.

In the sandwiching
article, a surprising benefit of ~10° C average reduction in drive temperature
was measured by an external thermal sensor. The aluminum plates between which
the drive is sandwiched act as heatsinks, increasing the radiating surface of
the drive for more effective cooling.

In retrospect, the 10° C cooling achieved also had to do with the positioning
of the sandwiched drive at the bottom front of the case, rather than up higher
in the 3.5 inch bay. In any PC tower case, the temperature at the bottom front
is significantly lower than at the higher drive bays, simply because hot air
rises up, with cooler outside air entering from the vent in the front, and hot
air exiting the case via the PSU fan exhaust at the top back. This is an intentional aspect of the ATX case specification.

The effect on temperature of decoupling the hard drive with elastic was not explored or discussed in the original article. For already quiet drives such as the Seagate Barracuda IV, the elastic suspension seems just as effective at noise reduction as aluminum plate sandwiching. However, there have been reports by readers and other experimenters that drive temperature is adversely affected by the elastic suspension.

Philip Dayson, a chemical engineer by training, explored this issue over the
past few weeks, experimenting with elastic and foam suspensions, as well as
a variety of heatsinking schemes. The data presented here is the result of Phil’s
work. You will find it very interesting, and very useful.

Phil’s quiet PC featured a Seagate Barracuda IV suspended in elastic in the
forth 5.25″ IDE bay of a mid-tower case. The drive space is above it was
free; the top two spaces occupied by CD drives.

Using the free utility Dtemp,
Phil determined that the temperature of the Seagate in idle (with case closed)
was 47° C. His first experiment was to remove the drive from the elastic
suspension and rest it on a piece of foam, as per the sandwich. No temperature
change was recorded nor any sonic difference heard.

Next, the drive was moved to the bottom front of the case and rested on foam.
The temperature dropped to 41° C. This temperature reduction can only be
attributed to the change in location within the case, as no other change was
made. In the table further below, you’ll see that there is a consistent 6°
C difference between all drive bay and bottom of case locations. 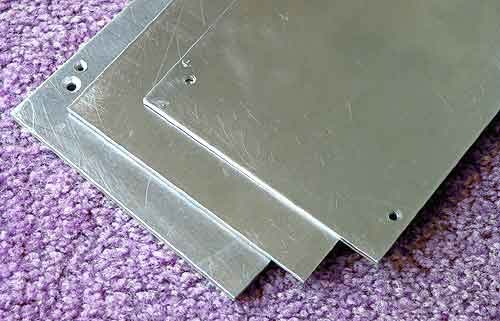 Thinner aluminum plates: for cooling only

Next, the drive was sandwiched, with insulating foam placed around the sides
as per the original sandwich article. Rather than use heavy thick aluminum pieces, Phil chose thinner (1/8″ thickness) pieces that were easier to work with. In cooling, although high mass can help, it is the radiating surface area that is of true importance. (Phil was satisfied with the noise of the decouple-mounted Barracuda IV in the closed PC case. It was already inaudible.) Left on the bottom of the case on foam, the temperature of the sandwiched drive stabilized at 39° C. The insulating foam was then
removed from around the sides. The temperature dropped further and stabilized at 36° C. Moving the sandwiched drive up to the original
location in the fourth drive bay (on foam) resulted in 42° C temperature.

Intrigued, by the effect of the insulation foam around the sides, Phil found a piece of aluminum U-channel in his workshop, cut
two pieces about 7.5″ long, and screwed them to the sides of the drive.
Again the drive was left on the bottom of the case on foam. The temperature
dropped to 34° C. Moving the drive up to the original location in the fourth
drive bay (on foam) with the side aluminum channels in place resulted in 40°
C temperature.

The Sides of the Hard Drive are Hotter!

At this point, Phil began to wonder about the source of heat in the hard drive,
and the path of the heat within the drive. His fingers told him that the sides
of the drive were definitely hotter than the top or bottom surface of the drive.

An examination of several hard drives on hand makes it clear that the sides
are invariably an extension of the bottom, which is formed from a single cast
and/or machined piece of metal. This substantial piece of metal is what the
mounting screws are anchored to. The top is a thin metal cover screwed or bolted
to the bottom / sides with tiny screws. Some drives, such as the Barracuda IV,
have a similar protective thin metal cover on the bottom as well. The density
and solidity of the bottom / side part compared to the top plate is easily demonstrated
by tapping with one’s fingernails on the respective surfaces: the top emits a resonant,
hollow sound; the bottom emits a non-resonant, solid click.

A denser, heavier piece of metal naturally transfers heat more efficiently
than a thinner lighter one. This explains why the sides of the drive get hotter
than the top cover. The heat is generated by the rotation of the disks, and passed to the cast metal piece, from which it is transmitted to the top (and bottom, if there is one). This means there is a degree of cooling by conduction in the
way that hard drives re normally mounted, by screws into a 3.5″ bay. This
was something I checked myself: one of my systems has a Barracuda HD suspended
in the lowest 5.25″ drive bay. Its temperature is normally 47° C. Mounting
it normally in the 3.5″ drive bay directly below had the effect of reducing
the temperature to 44° C. 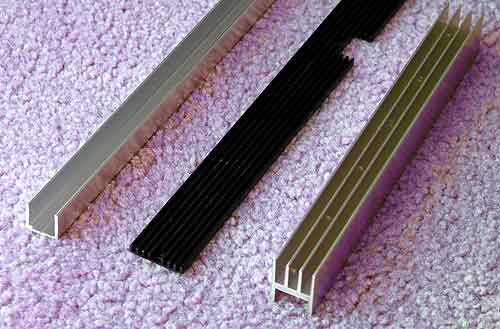 Phil continued his experiments with different heatsink materials, configurations
and positioning. The two other heatsink materials examined are shown alongside
the original U-channel below. In the end, a double layer of the U-channel was
found to be the most effective heatsink.

The Effect of Heatsinks / Location on HD Temperature

The best heatsink arrangement turned out to be two 7.5″ lengths of the
original U-channel bolted together. As the drive is slightly under 6″ long,
this means the U-channels actually protrude into the space behind the drive
bay, as shown in the photo below. Phil believes this extra length provides additional
cooling due to exposure to airflow in the case (moving up to the PSU inlets).
Looking at the 4° C difference between the 6″ channels and the 7.5″
channels (#4 and #5), this theory is very plausible.

NOTE: The aluminum U-channels in these photos
were digitally colored to enhance their visibility against the other silver-colored materials in the PC. 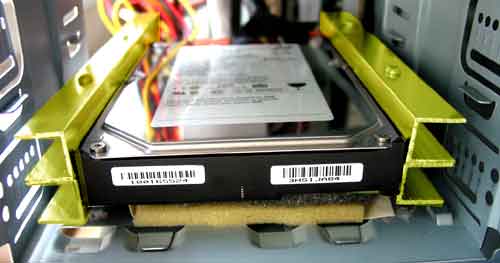 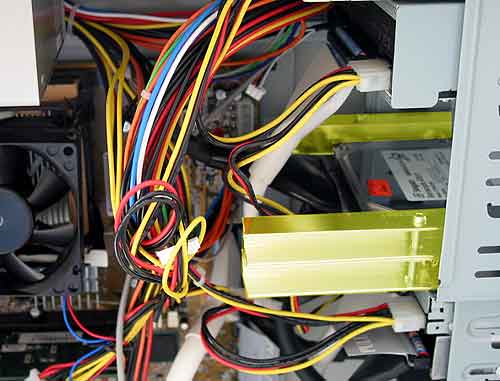 In conclusion, the following can be noted:

1. In a tower-style case, the coolest position for the hard drive is probably
the bottom front. The bottom back may also be a cool place. In terms of
noise, this does put it farthest from the ear.

2. The front upper position for a hard drive is possibly the worst, for
both heat and noise.

3. More heat emanates directly from the sides of hard drives than the top or bottom. This is true, at least, of the Seagate Barracuda IV, but as all hard drives examined share the same basic structure of a solid casing upon which thin top and bottom panels appear to be mounted, it is expected other drives exhibit the same characteristic.

4. For passive cooling, heatsinks mounted on the sides of the hard drive are most effective.

4. Even a small amount of airflow across the heat radiating surface usually aids cooling.

Phil Dayson’s experiments have helped to advance my understanding
of heating and cooling issues in hard drives. Hopefully, this article does the
same for you and lead to cool as well as quiet hard drives in your silent PCs.
Thank you Phil!