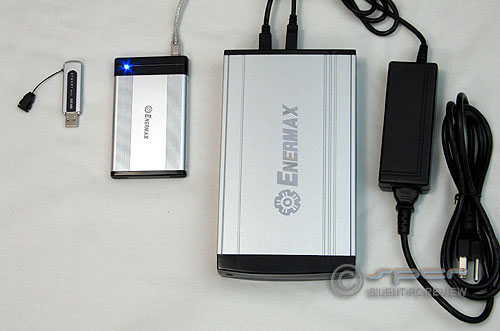 The Enermax Laureate EB205U external notebook HDD enclosure is a little aluminum enclosure only marginally bigger than a notebook drive. USB 2.0 provides both connectivity and power for the drive. How well does this $22 MSRP device work?

Growth in the digital storage markets has been explosive in recent years. So much so that both flash memory makers and hard drive makers are happy. BusinessWeek Online reported recently (29 Sept 2005):

“Chang Gyu Hwang is chief executive of the world’s largest supplier of flash memory chips, South Korea’s Samsung. Over the last few weeks, he has been quoted as hailing the start of the ‘Flash Rush Era.’ Flash memory chips — specifically, a type of flash known as NAND, which is used to store data in devices such as music players and digital cameras — will in time challenge and may even replace small hard drives.”

“To Bill Watkins, chief executive of Seagate Technology (NYSE:STX – News), the world’s largest manufacturer of hard drives, that sounds like a challenge. Samsung also manufactures hard disk drives, but in much smaller quantities. ‘It’s kind of funny,’says Watkins. ‘I see so much opportunity that I would be more than willing to take his hard drive unit [division] off his hands.'”

Much of the demand for digital storage, whether in the form of flash memory or hard drives, is being driven by “personal storage”. Micro-size storage devices are used in digital cameras, USB drives, MP3 players, mobile phones, etc. Among hard drives, it’s demand for storing music, images and movies in digital format that’s driving growth. Half-terabyte 3.5″ drives were recently released by Seagate, Hitachi and Maxtor. Demand for high capacity drives is said to be the fastest growing sector of the market.

Among external storage devices, there is the now ubiquitous USB flash memory drive, which started at just 16 MB a couple years ago but have increased dramatically in capacity. A search on SPCR’s Shopping Engine showed 2 GB models starting as low as US$100. There’s talk of >10GB USB flash drives in the near future, but at least initially, the price will be pretty high. Only slightly larger devices that use Hitachi, Seagate or Toshiba micro hard drives with discs of <1″ diameter offer higher capacity. Seagate’s 5GB Pocket Drive can be had for ~$80 and a new Iomega 8GB model has a MRSP of $170.

Moving a big step in size are external hard drive storage devices that use 2.5″ and 3.5″ hard drives. In general, this is a metal or plastic box not much larger than the hard drive it encloses, with a USB 2.0 or Firewire interface to the computer. Their larger size puts them in a somewhat different category than the teeny-tiny USB flash and micro drive devices, but a further distinction needs to be made between the 2.5″ external drive and the 3.5″ external drive. The latter requires external power, usually in the form of a wall-wart; the former does not.

Any road warrior will confirm that these are compelling features. The 2.5″ external drive enclosures are not new; they’ve been around for a few years. There are two basic varieties: The ones that come supplied with a drive (and often some backup-type software) and the ones that don’t.

The product under review is an enclosure (without a hard drive) from Enermax, a brand long associated with power supplies. Like so many component brands, Enermax has expanded into other product categories, including cases, accessories and external storage enclosures. The EB205U is one of several offered by Enermax, including some 3.5″ drive enclosures like the one shown above. The unit comes in a nice little box that holds only three parts, as shown below: 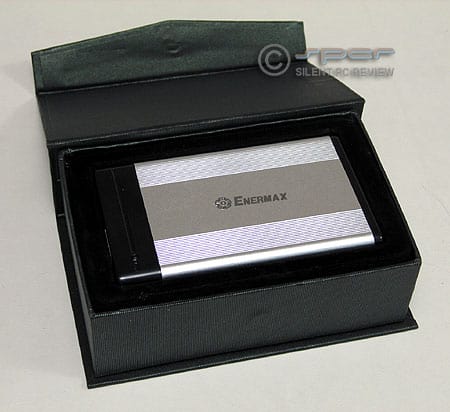 The unit comes in a nice little box… 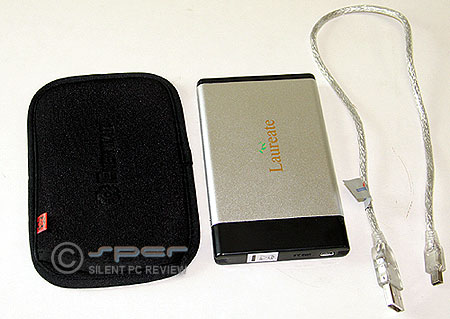 The enclosure is basically a sturdy, light, extruded aluminum tube with two plastic end caps that are each held by two screws. The aluminum is strong enough that fairly hard with my thumbs to make it flex inward a bit.

To install the drive requires undoing two screws, the ones that hold the end with the USB port. The screws are tiny and feel easy to strip. I’d suggest care with these. Enermax could have chosen larger bolts or provided a metal insert in the plastic that the screw threads into.

I chose a Samsung MP0402H 40GB drive, SPCR’s low noise reference; it’s about the quietest drive we’ve used or tested. This particular sample had already been formatted and loaded with Windows XP Pro for another system. 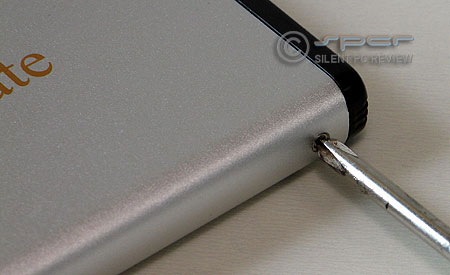 Undo two screws to access the enclosure; this is actually the wrong end.

This is the socket the drive plugs into. There is only one way it will fit. 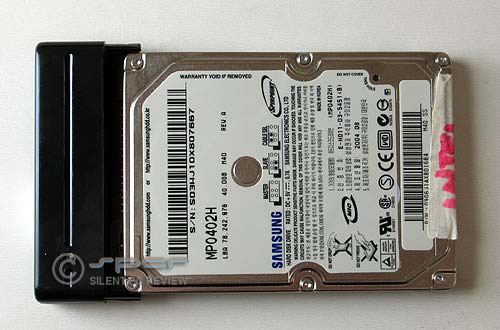 The process of installing the HDD took less than five minutes. With the drive in, the entire unit weighed about 140 grams, which means the EB205U weighs less than 40 grams. I used the supplied USB 2.0 cable (another 10 grams) to connect the device to a desktop PC. Windows XP duly recognized it as a USB 2.0 storage device and it became available for use in about 30 seconds. The Samsung drive is amazingly quiet, so I could barely hear it working at all, even sitting atop the desk next to the keyboard. Yet, I had an additional 40 GB of storage available, just by plugging in one cable and waiting 30 seconds. With a different model of notebook drive, it could have been 120GB.

What was the cost? The MSRP for the EB205U is $22; SPCR’s Shopping Engine found the Samsung MP0402H 40GB hard drive for as little as $61. So the total was $83, nearly $20 less than a 2 GB USB flash drive. That’s pretty compelling for 20X the capacity, even if this portable external drive is many times bigger than a USB flash drive; it’s still eminently portable.

How handy is this thing? Very. Here’s a graphic illustration of just how handy. 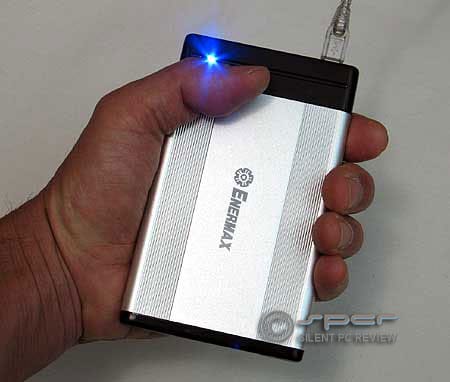 Perhaps a bit big for your shirt pocket, but an inside jacket pocket is perfectly OK. So is most any handbag.

Over the last couple of years, I’ve acquired a number of USB flash drives, ranging from a low 64 MB unit to more useful 256MB and 512 MB devices. They are undeniably useful, and they’ve made CD writing almost a thing of the past, except for archival or disk duplication purposes.

This external notebook drive is a different breed altogether. Capacity is the obvious difference. Compared to the 512 MB limit of my highest capacity USB flash drive, it makes a whole new range of things possible. A few of the possibilities that occurred to me:

Getting back to the unit itself, the supplied pouch seemed a bit silly at first. It’s made of stretchy poly-something-or-other fabric, very light and a bit padded. The EB205U slides in easily through the open end, but it is snug and secure in the pouch due to the fabric’s stretchiness. Then I realized that the pouch vastly improves the shock resistance of the drive, much like the soft, light yet impact-resistant packing materials used for shipping delicate things — like drives. Hmmm, maybe not so silly after all. In fact, the pouch may be the best part of this product. The aluminum casing gives the drive a tough skin to protect against deformation of its thin outer casing; the pouch acts as a shock absorber, reducing G-forces from drops and knocks.

With the device in the pouch, I tried a flat drop to the thinly carpeted floor from desktop height, keeping my fingers crossed. The drive was not hooked up. When plugged back in, it started up without fuss… and has shown no signs of damage. 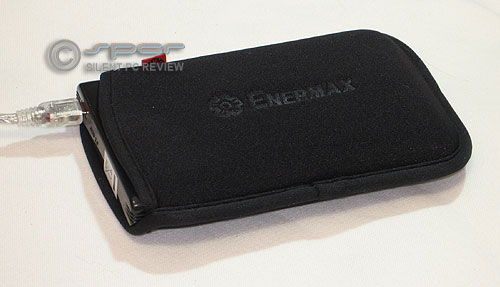 The pouch also reduces the possibility of hard drive vibrations from causing any noise when placed atop a table, desk, etc., even during seek or write. There probably isn’t much direct acoustic attenuation, but most notebook drives are pretty quiet anyway.

Did the pouch trap the heat from the drive at all? Probably, but in the 20~21°C ambient of my room, it never felt more than mildly warm, in or out of the pouch. I would not expect any thermal issues except maybe in really hot weather, like over 35°C.

The Enermax EB205U + Samsung drive felt quick, noticeably quicker than USB flash drives for moving any files bigger than ~100 MB. The speed difference may have been there for smaller files too, but it wasn’t as easily noticed.

Some HD Tach performance and AC power draw measurements were done with the EB205U + Samsung drive in a desktop PC as well as a laptop. A USB flash drive and a 200G 3.5″ drive were also tested under the same conditions for comparison.

There are some practical power-related considerations about using the EB205U. The main question is how much power can be pulled from a USB 2.0 port.

As far as I can tell, USB ports are specified to provide a maximum of 500mA at 5V, or 2.5W. This is fine with true USB 2.0 “powered bus” ports. Unpowered USB Hubs and most after-market USB 2.0 PC CardBus cards will not provide the necessary 5-volts. The EB205U + Samsung MP0402H combo worked perfectly fine with about a half dozen desktop PCs with motherboards ranging in vintage from current to almost three years old. Using the USB ports on the I/O panel of the motherboard ensured reliable connection every time.

So the specified startup peak power draw is double what USB 2.0 is specified to provide. The Samsung in the EB205U always started without problems when inserted directly to a motherboard USB header or expansion slots connected to the internal motherboard USB pins — like the USB ports on the front or back panel of most PCs. With unpowered extension cables, it did not always work, however. The extra contact point and length of the extension cable may cause enough of a voltage drop to prevent the drive from powering up. The very short USB 2.0 cable supplied with the EB205U may be very deliberate, to avoid voltage loss.

A check of all the major hard drive makers’ specifications revealed that virtually all the 5400 RPM parallel ATA notebook drives are rated for 5W or lower startup power. SATA models usually take a bit more power, but that’s moot because the EB205U does not accept SATA drives. Seagate’s 7200 RPM drives are also 5W at startup. Hitachi’s 7200 RPM drives are the only ones that went higher: 5.5W. So, in general, it would appear that just about any current notebook would work fine when used directly into a USB 2.0 port without an extender or unpowered hub. Unfortunately, I didn’t have a powered hub to tell you how that works. From a mobile point of view, that’s hardly serious, but my guess is that it would probably work fine..

You must know by now what I am thinking about the Enermax Laureate EB205U: 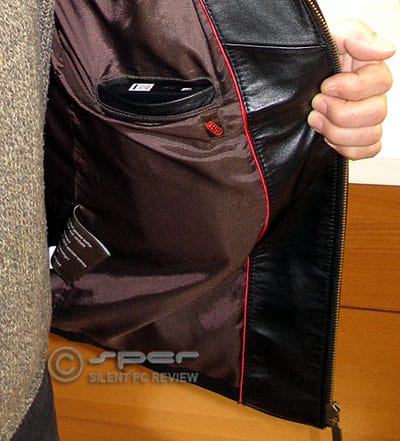 Ready to take the storage road.

Thanks to Coolergiant Computers
Inc.
for the Enermax Laureate EB205U sample and for bringing our attention to this storage option.

Discuss this article in the SPCR Forum.