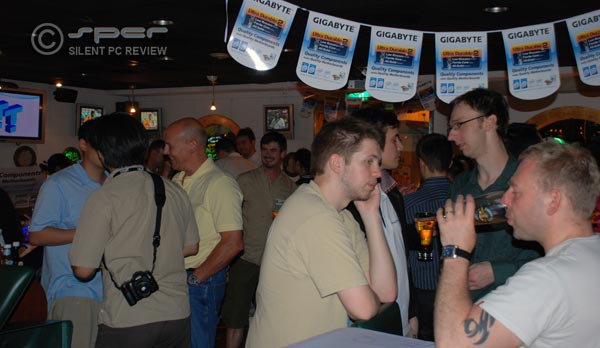 Gigabyte arranged an exclusive tour for SPCR of its impressive anechoic and thermal testing chambers in Taipei during Computex 2007. These are ultimate tools for acoustic/thermal analysis. Here’s a mini-tour for SPCR readers.

It began as a casual chat in June with old acquaintances over a beer at a pub at a pre-Computex press party organized by Cameron Wilmot of TweakTown. Cam, a young Aussie, moved to Taipei a couple of years ago to be closer to his sources and to the PC hardware industry; a smart move for a PC hardware website operator. The beery event at The Tavern
near the Taipei Conference Center was sponsored by Gigabyte. Tim Handley was one of Gigabyte’s PR men at the event. Tim’s history with SPCR goes back to the days when he was working in marketing for VIA. He helped to make VIA the first advertiser on SPCR and initiated a good working relationship that remains to this day. Naturally we spent some time catching up with each other over a few drinks.

TweakTown’s beery pre-Computex press party at The Tavern in Taipei, sponsored by Gigabyte

Conversation turned at some point to my long-standing, half-serious fantasy of building an underground anechoic chamber under my back yard and garage in Vancouver, a topic that rarely fails to amuse folks who hear it the first time. This prompted Tim to mention Gigabyte’s anechoic chamber, located somewhere deep underground, below their main headquarters building in Taipei. Tim admitted he had never seen this anechoic chamber or the other test facilities in that section of the building, and promised to see if a visit could be arranged for me. The next day, my memory of the previous evening’s details were blurred by large quantities of alcohol but Tim’s faculties evidently remained intact, as he followed up with a call to say an exclusive visit had been arranged.

After a general conference for tech journalists at Gigabyte’s main office on Beixin Road some days later, Tim Handley wisked me to the back and introduced me to Bruce Yeh, manager of the OEM/ODM product R&D department. They led me down into the bowels of this modern office building, down and around the back stairs to an area that even most of the Gigabyte staff do not know well. Two levels below the main floor is Bruce Yeh’s realm. It begins with a hallway that must be the valley of death for some of Gigabyte’s products: Controlled temperature test chambers abound in this corridor. 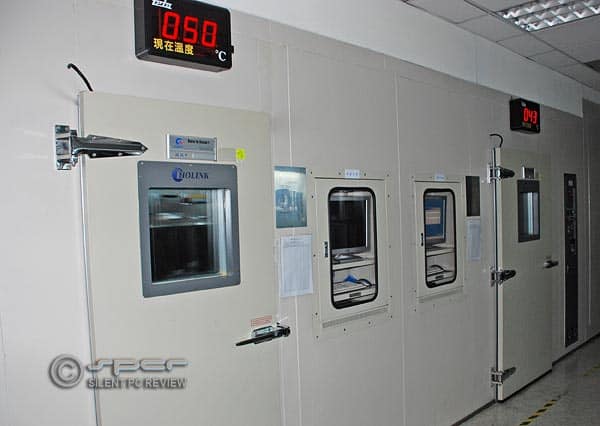 Two large temperature-controlled rooms for testing high temperature performance of various products.
They’re often "cooked" (burn-tested) while in operation not just for hours but days.
One room is set at 50°C, and the other is at 43°C. 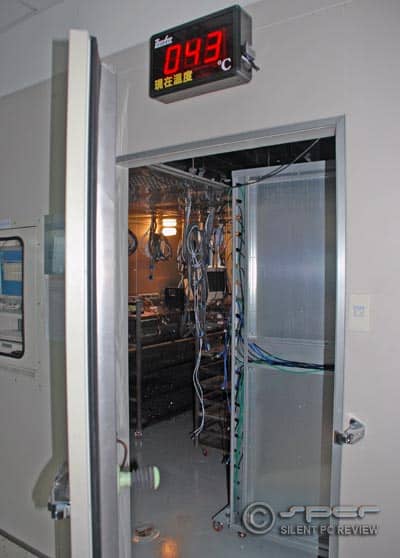 Here’s what it looks inside one of the big thermal test chambers. 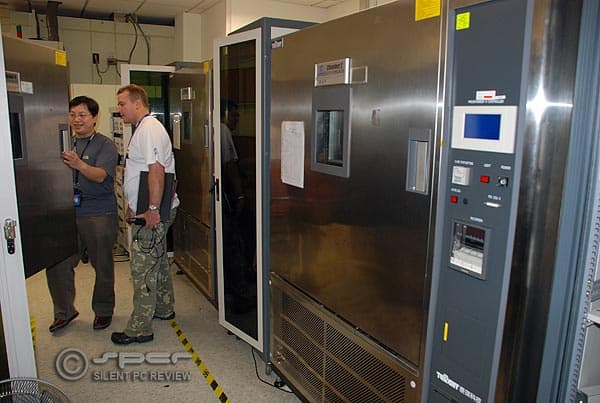 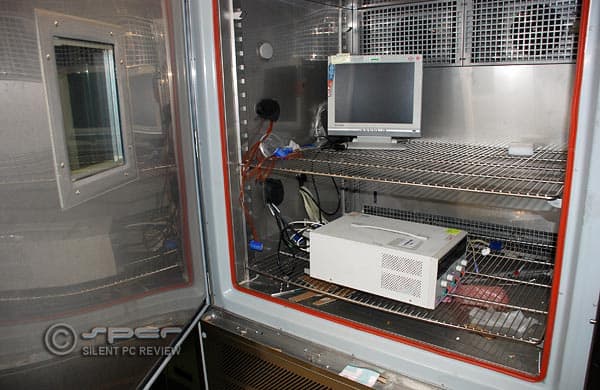 Here’s what we see inside one of the smaller thermal test chambers.

A few more twists and turns, some more doorways and hallways… then we finally arrived at the anechoic chamber. Audio testing gear is outside the room on a workbench. The massive door is big enough to allow easy ingress and egress of gear, yet it is still sound proof. It is equipped with a large solenoid controlled pressure seal lock. 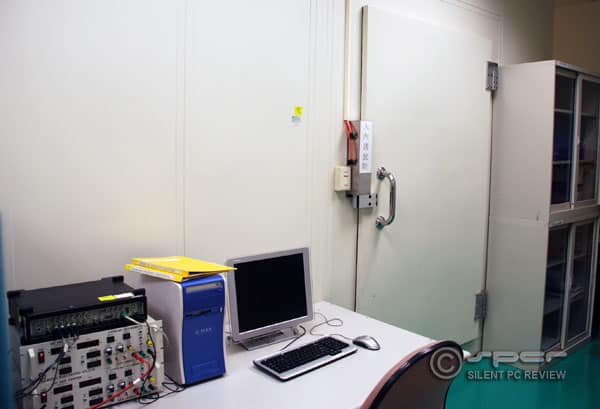 B&K 7533 Audio analyzers along with microphone preamp and dedicated PC outside the door of the anechoic chamber. 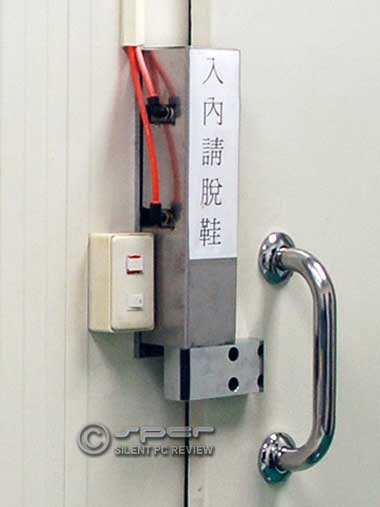 The solenoid powered pressure lock on the door ensures a complete seal. 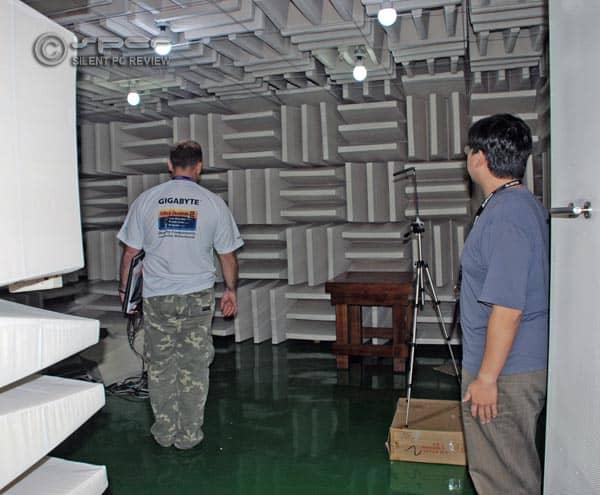 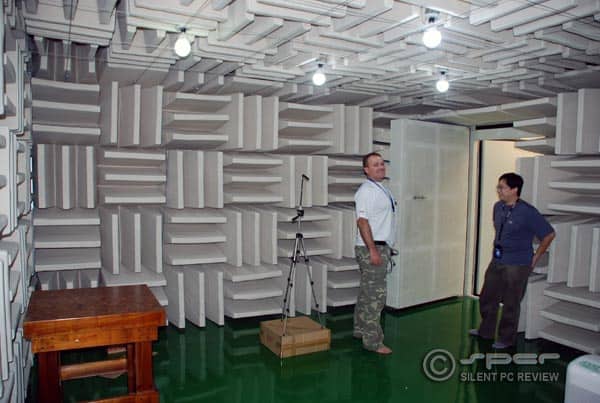 View from the middle of the chamber. No shoes policy in effect.
The test table has been built precisely to the specs described in ISO 7779. 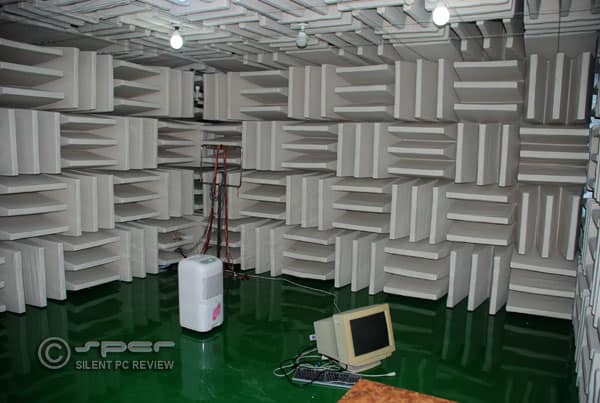 View from the middle of the chamber, looking the other way.

Gigabyte’s anechoic chamber is a pretty serious affair. It is a fairly large 5.5m x 4.8m x 3.1m hemi-anechoic room, which means the floor is deliberately left reflective, and the other five boundary planes are treated to be completely sound absorbent. This is the type of design most commonly stipulated in recent acoustics-related testing standards. The chamber was constructed at the end of 2002, and its sonic qualities are tested every two years by an outside consulting company, Industrial Technology Research Institute. The residual ambient noise level in the chamber is reportedly 15 dB, unweighted, which is extremely low, considerably lower than the noise level in the SPCR test rooms, even in the middle of the night; SPCR might approach 20 dB at 2am on a quiet winter night. With A-weighting applied, that 15 dB would probably fall to ~10 dBA or better. No frequency response curve for background noise was available to check how much of the existing noise is in the <100Hz band. My guess is that most of it is in the low frequency range, but there’s not much of it because of the room’s location so far below the ground level, and thus insulated from traffic and other machine noises by at least a couple floors.

The anechoic chamber is used by Bruce Yeh’s team to provide acoustic measurements for various other teams within Gigabyte. The products they test make noise mainly due to fans — such as CPU heatsinks, video cards and motherboards equipped with cooling fans, power supplies, and cases — but also, in the case of complete systems and notebooks, due to hard drives. 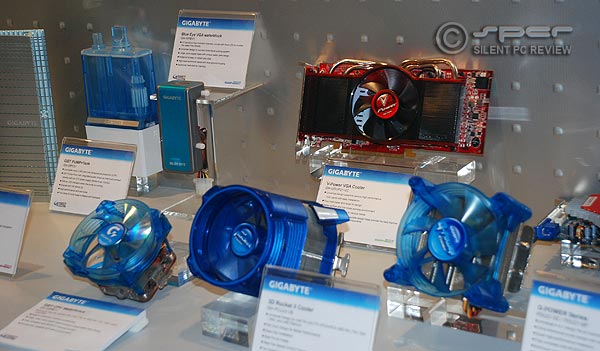 A few of the thermal solution products that have undergone acoustic testing in Gigabyte’s anechoic chamber.

All in all, Gigabytes acoustic and thermal testing facilities proved to be most impressive. The mere existence of such facilities suggest a level of commitment by Gigabyte to thermal and acoustic design that I was unaware of before this exclusive visit. I will be looking forward to reviewing some of the new fruits of Gigabyte’s acoustic / thermal R&D.

Much thanks to Tim Handley and Bruce Yeh for graciously organizing this fascinating tour of Gigabyte‘s acoustic and thermal testing facilities.

Other SPCR articles of related interest:

SPCR’s Test / Sound Lab: A Short Tour
Noise in Computing: A Primer
What is a "Silent" Computer?