The title says it all. It’s a Silent (22 dBA@1m) Gaming PC certified by SPCR and offered by EndPCNoise.

EndPCNoise of Vancouver, Washington offers SPCR-designed quiet PC systems in the US

EndPCNoise is the system integrator and vendor of these systems. SPCR has no involvement whatsoever in their sale, distribution or servicing; only the original design and verification of design objectives in the production samples supplied by EndPCNoise. For details of the partnership, please see SPCR Designed Computer Systems.

This is a silent near-ultimate gaming machine utilizing the most advanced technologies available. The EG22DBA is a powerful gaming computer, a speed demon that will take on all comers without even a hint of the power lurking under its hood. It is the equivalent of the classic “sleeper” street racer.

The design goals for Model 22DBA were:

The foundation of this system is the Antec P182 case, a refinement of the P180 case which I designed with/for Antec. It is the best tower case for high performance and low noise I know of, and it is further modified by EndPCNoise for even better performance. The high airflow capability and direct, unimpeded airflow paths, the advanced steel-plastic composite panel construction, complete AcousticPack Delux V2 acoustic damping treatment, and additional noise damped enclosure for the hard drive all work together for high performance with minimal noise.

In this build, a Zalman ZM850 850W power supply shares space with the hard drive in the bottom chamber. The power supply and HDD are thermally and acoustically isolated from the rest of the system. The separate intake and exhaust path ensures that the PSU fan does not ramps up due to the increased heat of the CPU, video card and other components. In actual use, the PSU fan should never ramp up except maybe in very hot weather under long term extreme load conditions.

Tests with the Final Prototype

The final prototype of the Extreme Gamer 22DBA was built by EndPCNoise after about three months of back and forth cooperative development. I spent about four weeks with this final prototype. In its final configuration, it is one of the quietest systems I’ve heard, regardless of computing performance. 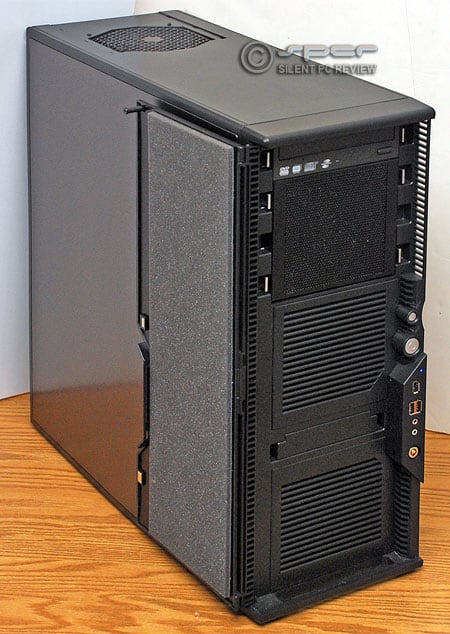 Three optical drive bays were converted to an extra intake vent with a Scythe Kama Bay.

The components in the prototype:

The key acoustic features (and modifications of the Antec P182) of this system: 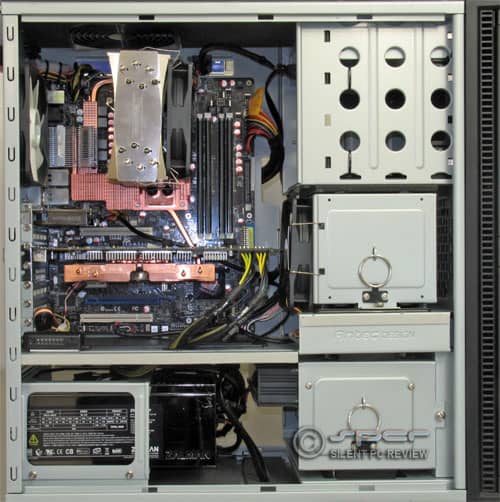 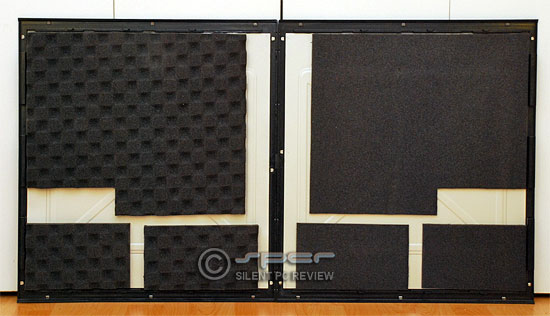 AcoustiPack on the inside of both side panels.

Many tools
were used to analyze the system:

I measured temperature, noise and AC power draw under various loads in ambient conditions of ~18 dBA and 21°C over a period of several days. Some of the stress tests were run continuously for more than 12 hours.

The combination of ATI Tool stressing the 8800GTX video card and Prime95 loading all four cores of the Intel Q6600 led to the highest measured power demand of any of the stress tests. Thermally, the system took this in stride, not even breaking a sweat during a 12 hour continuous session at this load. There was no misbehavior of any kind by the video card, and no errors in Prime95. This continuous load is more stressful thermally than playing games, where there are always peaks and valleys in power demand. During a 2 hour continuous loop of all the tests in 3DMark06, the highest VGA temperature peak recorded was 68°C, and it more typically ran in the low 60s; the CPU temperature didn’t exceed 50°C

Most importantly, the extremely low 22 dBA@1m acoustics of the system never really changed. The fans and the hard drive combine to make a soft wooshing that can be heard when you are very close. Muted clicking noise is audible when the hard drive is seeking. When the system is placed under the desk as is the norm for large tower systems, whatever noise the system makes becomes basically inaudible until you get on your hands and knees in front of the machine.

Just how quiet is it? Like EPCN’s SPCR Model One, it is quieter than the 17″ iMac and the 24″ iMac we reviewed. Those iMacs happen to be the quietest mass production computers we’ve heard. Model 22DBA has slightly nicer acoustics than the iMacs, probably because of its larger fans, which tend to have a softer broadband sound with less treble. The AcoustiPack Delux V2 material lining the internal panels help reduce standing waves and tonal aspects to make the overall sound signature quite “benign”.

The 850W Zalman PSU may seem like overkill for a system that draws only 314W maximum. However, very brief peaks are known to jump 25% higher, and the extra headroom also allows much more powerful configurations (such as the recently released nVidia 9800GX2, rated for 197W max) for truly extreme gamers. The main reason for this PSU choice, however, is that it is the quietest EPCN has found among high power units: It’s one that rarely if ever ramps up its fan, due to its high efficiency, heatpipe technology and well-behaved 140mm fan cooling fan.

EndPCNoise offers 7200 rpm performance notebook drive options for even lower noise and power, as well as Solid State Drive, the ultimate in low power and performance, especially random access. The WD Raptor 10,000 rpm drives are also available as options. They offer the best seek time of all the moving HDDs, but at the expense of much louder seek noise. I did try a version with a Raptor 150GB, and it can push the peak noise up to around 28 dBA@1m. I personally don’t recommend it, as the noise price seems too high. The standard WD SE16 640, with its dual high density platters, provides excellent performance, whose throughput probably exceeds that of the Raptors.

Within the next few weeks, however, a new 10,000 rpm drive from WD, the VelociRaptor, will soon be available as an option. This unique new 2.5″ SATA drive offers better performance than the current Raptor while reducing both heat and noise.

Finally, the ambient temperature was raised to 30°C using a 900W radiant heater positioned directly in front of the system. The results were very slightly higher CPU and VGA temperatures, but no change in overall noise. It’s possible that higher temperatures could make the PSU fan speed up, but probably only if you’ve opted for a dual-video card and multi-HDD setup that pulls at least 150W more than the test system. If the air temperature was that hot, you probably would not choose to be at your computer for any length of time anyway.

You can probably imagine the kind of performance that an Intel Q6600 CPU with 4GB of RAM, an nVidia 8800GTX video card and a fast HDD provides. I don’t think I’ve seen the OS or programs load so fast since the days of DOS. The game sequences in 3DMark were delivered with great speed, smoothness and beauty. This is one helova fast machine.

The SPCR Extreme Gamer 22DBA by EndPCNoise is a high performance gaming PC that runs so quietly that neither your nor your opponents will hear you coming, no matter how intense the action gets. 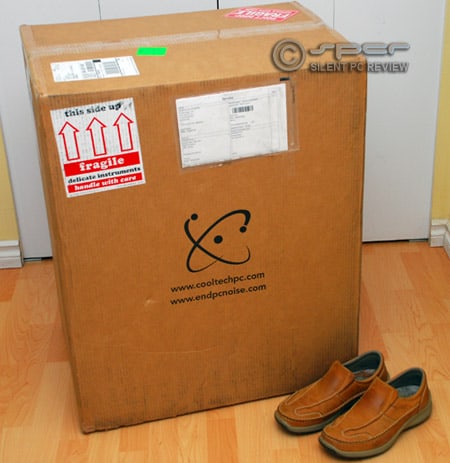 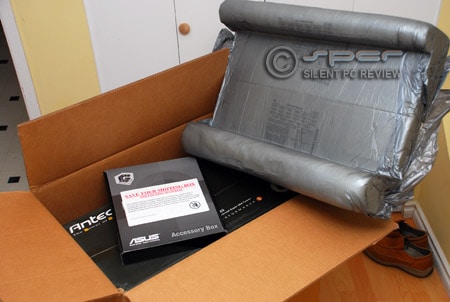 The inner box is nestled in custom-shaped anti-shock foam. 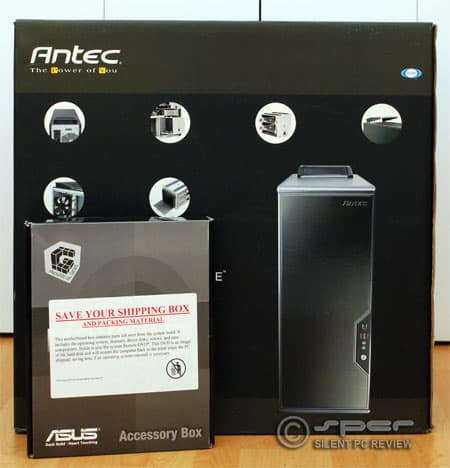 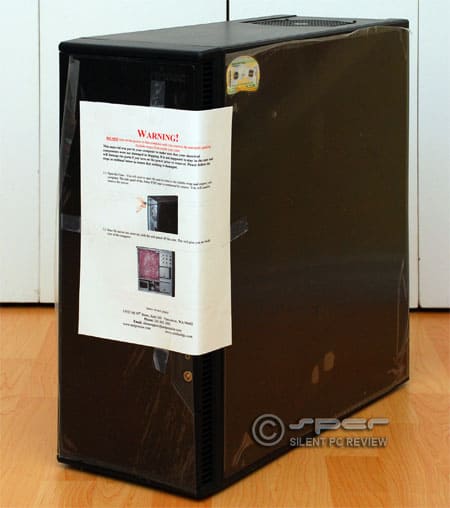 You’re warned to remove the bubble-wrap from inside the PC before powering it up. 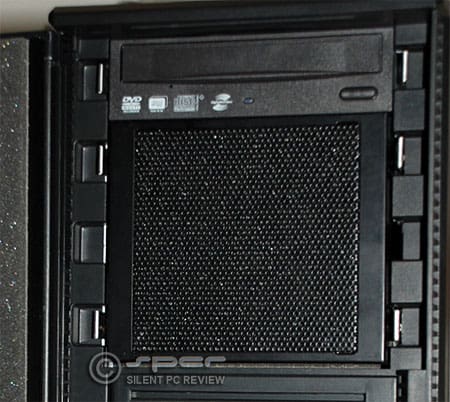 Close up of Kama Bay intake vent. It aids with CPU cooling. 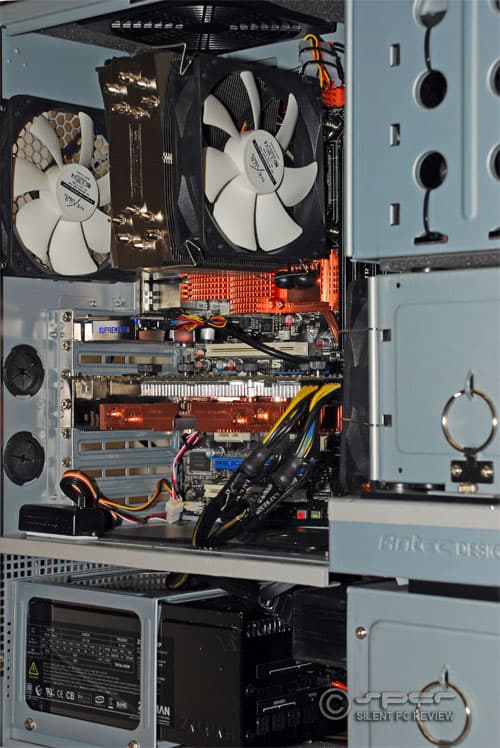 Another view of the interior. Cables are all well out of airflow paths.