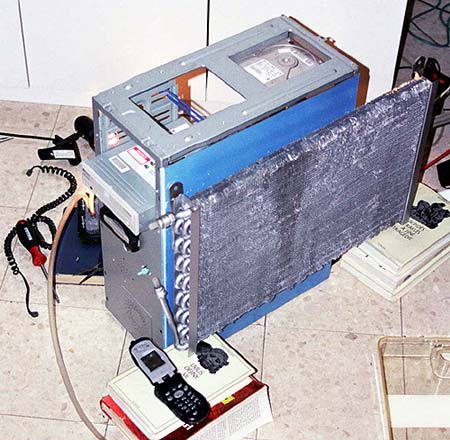 Given the the absence of any decoupling suspension on the hard drive, Ami’s fanless dual-CPU P3-500 Blue 42 can’t be a silent system. But I think it must be very quiet and it must have been fun for Ami Rodan to build. It’s another testament to PC silencing creativity — although some will quibble over the mixing of metals in the watercooling system.

EDITOR’S INTRODUCTION: Given the the absence of any decoupling suspension on the hard drive, Ami’s fanless dual-CPU P3-500 Blue 42 can’t be a silent system. But I think it must be very quiet and it must have been fun for Ami Rodan to build. It’s another testament to PC silencing creativity — although some will frown over the mixing of metals in the watercooling system. Enjoy the read. – Mike Chin

As a long time computer user and moderate time SPCR reader, silencing PC’s has become second nature to me. Almost every machine that comes under my hands is subjected to some sort of silencing treatment, not only because I can’t stand the incessant machine noise in my environment, but also since I use computers in my recording studio.

My first attempt at silencing a computer was replacing a stock PSU for a dual CPU PIII500 with a QuietPC.com PSU, resulting in a greatly reduced noise level and the beginning of an obsession with all things silent…an obsession whose culmination is currently my newest concept project: Blue 42.

The legacy system I mentioned above is the one I returned to when looking to prove a challenge that has long since occupied my mind: Can a PC be completely passively cooled, subject to the following conditions?

B. Temperatures have to stay reasonably low – i.e. no "my CPU is at 70C but feelin’ mighty happy about it" scenarios.

C. The system is limited to the case itself and be at least somewhat portable – i.e. no exotic systems running water to the basement and back again.

In this article I will explain in detail how I managed to achieve this goal given all three conditions: A passive, completely DIY watercooling rig with costing only $33.50 in parts and materials (for the cooling system). Along the way, I show what I think is a unique and original way to create homemade, DIY effective waterblocks with no need to weld, grind, nibble or use horribly expensive tools.

It was clear to me that I would need to use watercooling in some form or another. Achieving passive cooling using large heatsinks or heatpipes was demonstrated as feasible (I remember one astute SPCR reader who built an amazingly well crafted prototype) but since my machining / AutoCAD / Heatpipe skills are virtually nil, I decided to go the watercooling route. Besides, water dissipates heat around 15 times better than air, which means I’ll have to make 15 times less of an effort!

After more pondering, it occurred to me that given a large enough radiator and a strong enough pump, I could probably get away fanless by installing the radiator on the side of the case and letting the heat dissipate into the environment.

All I needed now was to find a large radiator. The Kibbutz where my girlfriend lives has a car junkyard… hmmm. I wonder if they’ll let me "harvest" one from an old car? I did a bit of hunting around and found exactly what I was looking for: A huge copper tube/aluminum fin rad (over 3 square meters) with small diameter connectors and split-flow design from an ’82 Subaru pickup. Opening the connector valve I heard the familiar ‘psss’ of escaping air signaling that it was airtight.

The only problem was the dirt. Removing the caulk. mud, dirt, leaves and insects from this baby took me about a month, starting off with a few hosedowns, some bathtub immersions in hot water and soap, and ending with an immersion in a very strong acid designed for cleaning boilers. I managed to get most of the gunk out, but it still isn’t looking perfect, as you can see in the pictures.

Case with rad mounted on the side, cell phone for scale purposes.

My victim for a case is an old mid-tower from 1997. The first thing I had to do was separate the two sides from the top cover (What were they thinking when they made this case??) so that the rad could be permanently mounted on the right side. I did this using a hacksaw, which makes pretty easy work out of cutting metal.

Next thing on my list was getting a pump, and with Condition A in mind (being cheap) I went to a local pet store and got me a nice 300 l/h submersible pump (totally silent) for $20. I placed it in my reservoir/pump bay made out of a Nescafe jar.

Now comes the hard part: How to make two tight-fitting, effective waterblocks for my two CPU’s –

At first I thought of using a small aluminum canister used for lip gloss, drill two holes into it, seal it somehow and strap it to my CPU. Big mistake. By all rights my computer should have died about 20 times, but luckily the PIII has an automatic shutdown feature when it overheats.

I learned the hard way that cooling a CPU. requires a flat, hard and relatively massive surface that can mate properly with the CPU die. What to do?

After thinking about it for a week or so, I was looking at the two CPU’s on my table and then it hit me – why not use the stock heatsinks already sitting on the CPU’s and turn them into waterblocks? That could be a fine idea but I didn’t know how on earth I could seal the heatsinks, in addition to permanently attaching copper barbs for the hoses..

I came across this little gem strolling idly in a hardware store. You cut off a piece, knead it, apply it, and when dry, it withstands up to 18,000 PSI and 200°C. Cost: $6.50 a pop (enough to make all the waterblocks you would ever need).

I then took a thin metal container used for chocolate powder and proceeded to cut it into small strips I could cover the top part of the heatsinks with. I bent the strips so that they would fit snugly between the outermost heatsink fins, measured where I wanted my inlet and outlet holes to be, drilled the two holes, refitted the strips, and then applied a thick layer of epoxy putty to the joints, effectively sealing the heatsink (NOTE: even if you don’t do it properly on the first try, you can always apply additional layers of putty, sealing any dormant leaks/holes.) 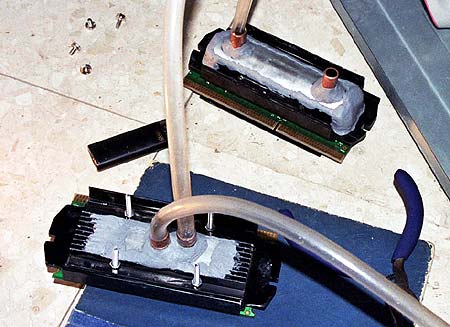 My two waterblocks: the one on the bottom is more effective since the center of the heatsink contains a "thin pin design" like the Swiftech and I could "latch" the copper tube directly between the pins. The top one has fins running from left to right so I just put a tube on each end.

I slipped two short pieces of copper tubing into the holes and permanently sealed them into place with my magic putty.

I intended to build a fanless system and a noisy PSU fan was simply unacceptable. I selected the by-now old QuietPC 230W PSU that I had lying around as my victim: 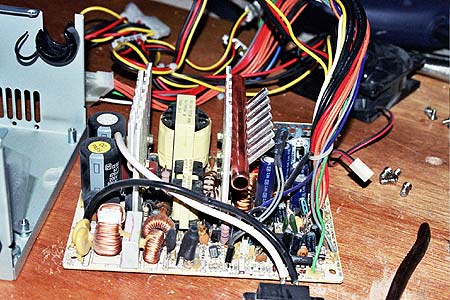 Remember: Always leave a PSU disconnected for at least 24 hours before working on it. Those capacitors can kill you!

This PSU has a very pliable heatsink, enabling me to slip two copper tubes between the pins and then bend them back around the tubes, creating a pretty effective heat transfer device.

The two tube ends were connected with a piece of tubing bent into a "U". Notice in the picture below that I used an old telephone cord wrapped around the tubing to prevent kinks, a technique used on tight spots throughout the case. The "outer" ends of the tube were slipped through two holes I drilled in the front of the PSU.

I decided to power up the PSU inside the case, just for testing purposes. Big mistake 2! I saw a spark and my apartment went dark.

After some thought I came to the conclusion that one of the heatsinks was live and I had accidentally made my entire case live! (Although I did take precautions against this when powering up – hiding behind a chair…) [Editor’s Note: Weenie! ;-D] 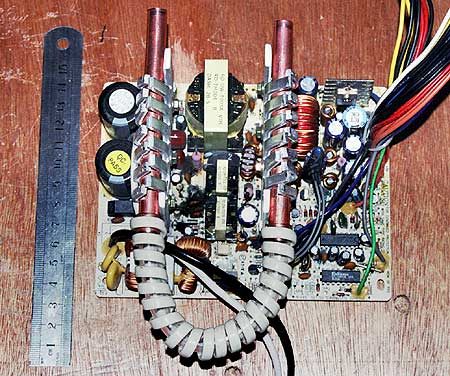 The copper tubing is just thick enough to allow watertight attachment of 9mm ID hoses without clamps. I ended up disconnecting the live one from the PCB and insulating the copper tubing from the PSU shell with electrician’s tape, just in case. 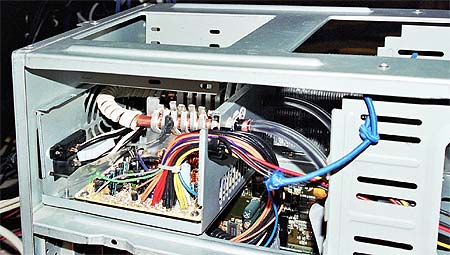 There was still some heat rising from the PSU components that were not attached to the heatsinks, so I decided to cut a top hole in the case so that it could escape through natural convection. 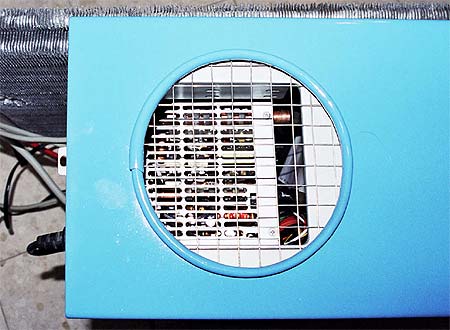 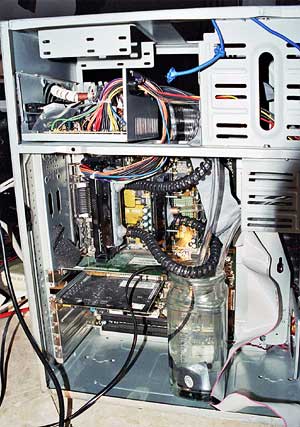 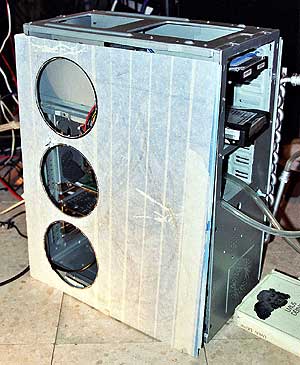 After I finally mounted all components into the case as shown above, I turned on the pump and fired up the computer: Silence.

Had I done something wrong? Did I kill it with all my fumbling around? Then I heard the Post-Beep.

HOW DOES IT PERFORM?

According to my calculations, each CPU. (PIII Katmai) creates a maximum of around 30W of heat, in addition to around 30-40W from the PSU.

Due to the nature of the system, temperatures vary according to the surrounding environment. Given a room temp. of around 20-21°C, both CPU’s remain slightly above 30°C at idle and slightly below 40°C at full load. The big radiator is doing its job wonderfully.

There is some erratic coil buzz coming from the PSU, but that was also present before I watercooled it, so I figured I just have to live with it. But later, I found out out that it occurs only when my Seagate Barracuda IV is connected to it, who knows why.. So I’m just running from an old 5400 hd I have here. Now there is no more PSU whine! [Editor’s Note: PSU buzzing / whining when connected to Seagate HDDs is not uncommon and has been discussed in the SPCR Forums. No easy solutions.]

The hard drive seeks are still audible, somewhat muted, and that’s about all the noise. I don’t hear a thing except a few seek noises once in a while. Putting your ear against the PSU you can occasionally hear some clicking from it, but most of the time it’s dead silent.

All in all, I’ve been living with the system for about a month and a half now and I sometimes find myself thinking there’s noise coming from the computer… when in fact it’s the hiss from my speakers! When I turn the speakers off, I don’t hear a thing when I’m surfing the web or doing word processing. This is in a soundproofed studio in a private residence in a very quiet neighborhood.

Oh, and I found out an easy way to discharge capacitors on a PSU – just disconnect it from the mains and press the power button on the computer: The fans will spin for a second or two, but once it has stopped, I think it means that the capacitors have been drained. 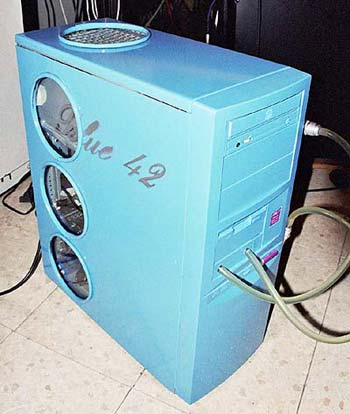 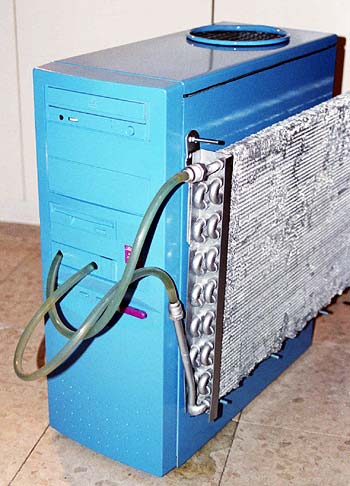 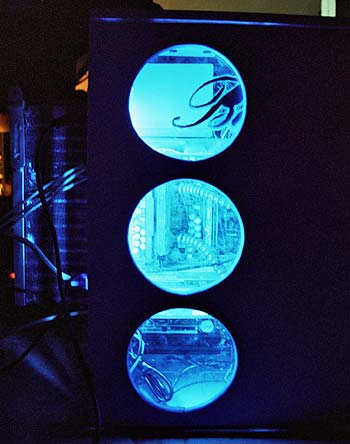 All in all, this project has been a unique experience for me, and I fully intend to go this route to cool all my other systems in the future. I hope you find this article helpful.