Editor’s Note: This article is partly a review of the TK Power 300 and partly a DIY quiet computer project. Many components and techniques discussed in Silent PC Review are put to good use by John: the above-mentioned PSU, VIA C3 processor, the quiet Seagate Barracuda IV hard drive, Zalman fan mounts, Panaflo 80mm fans, drive decoupling by suspension, etc. A worthy first article!

About the author: John Coyle is a health care worker who uses computers in his handling of clinical data as well as in research. Over the last 10 years, he has been involved in a number of unrelated projects, including video processing and heat stress analysis. You might wish to visit his web site, http://www.zunis.org.

Disclaimer: The author does not recommend the modifications described in
this review. These modifications may cause severe injury to anyone involved
in making them, may produce irreparable damage to the computer and may pose
other hazards such as fire danger. Anyone who attempts these modifications does
so at his own risk.

The computer recording these keystrokes sits on the floor by my desk, 24 inches
from my chair. It is 9pm, the house is entirely quiet. I know what machine sounds
I am listening for, and I can’t hear any.

The computer is not silent. A Barracuda IV hard drive spinning at 7200 rpm
is moving metal shearing air. If I put my ear close to the case, a faint humming
is audible. At this point, there are also 2 Panaflo 80mm fans whirling in the
case, each at a FanMate’d minimum voltage. Abruptly turning the fans off using
a remote switchbox produces no change in the sound field.

This is not a silent computer, but it is really, really quiet. 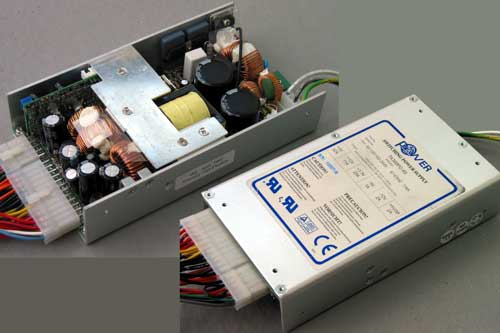 Here is the obligatory component recital:

The first step in this project was to remove the original power supply unit
from the case. The backplate of the PSU was then cut off using tin snips in
order to provide an off-on switch and power plug for the TKP300 PSU. This photo
shows a perfectly fitted backplate. (Of course: It’s the original). The orange
twist-on wire connectors linking the on-off switch and power plug to the TKP300
PSU can be seen through the grill. There is no PSU fan. 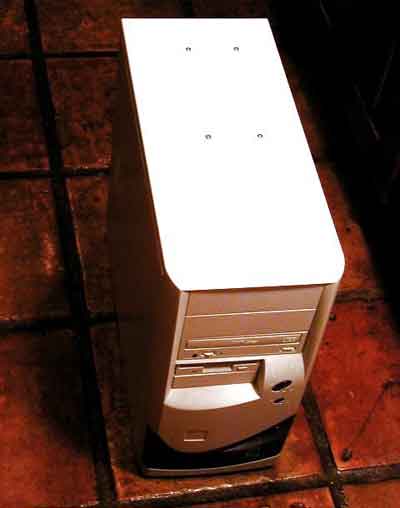 The next step was to drill 4 holes in the top of the case. Bolts go through
these holes to engage the threaded holes in the bottom plate of the TKP300 PSU.
This installation was straightforward, and left the TKP300 hanging upside down
from the top of the case like a mutant bat. The case acts as a heat sink for
the TKP300. The only part of the case that feels warm to touch is the rectangular
area defined by lines between the 4 suspension bolts. This area became uncomfortably
warm to touch once, during formatting of the 40GB hard drive. At the current
moment, the TKP300 rectangle on the top of the case is mildly warm. (For
more details about installing a TKP300, please study Silicon
Acoustics’ installation guide. – Editor)

The TKP300 may be a tricky customer: Mike Chin has a sample which he says produces
excessive coil buzzing noisy enough to pretty much outweigh the benefit of fanlessness.
My TKP 300 unit has buzzed for a few seconds on several occasions. It has run
for many hours with nary a buzz of any magnitude. It is possible that it will
become a significant buzzer, but so far, so good. It is quiet as a brass idol.

The picture below shows the TKP300 PSU and the AAVID passive heat sink. Everything
was still very tidy at this point. 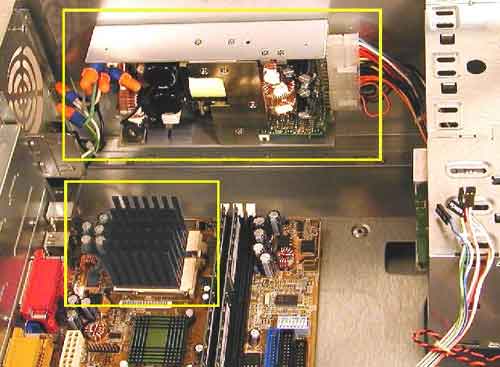 In hope of eliminating noise, I had suspended the Barracuda IV in the 5.25″
drive bay at the front of the case, just forward of the TKP300. This eliminated
seek noise and vibration, but the hard drive heated to ~50°C, so a different
location was tried. The next position was on a thick piece of foam on the floor
of the case, near the back. This spot also resulted in high hard drive temperatures.
In the fanless environment, clamping the hard drive to a metal cage seemed to
result in best cooling.

I really wanted to suspend the hard drive. I decided to hang the hard drive
in a 5.25″ mounting frame, and then affix the frame to the floor of the
case. Cooling, if needed, would be provided by a very quiet fan, and then a
decision would be made to see if the
trade-off was worthwhile.

An MF-520 mounting frame was obtained inexpensively. I flattened the metal
struts which are supposed to be fixed to a 3.5″ hard drive. The photo demonstrates
my advanced metal-working skills 😉 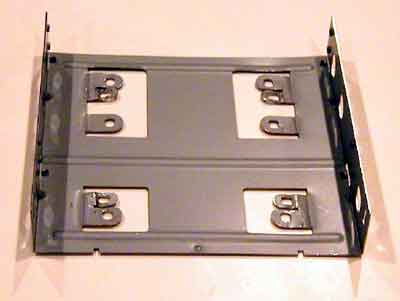 A trip to a nearby fabric store led to purchase of black elastic roping. (I
also had some very thin bungee cord material from a hardware store, but the
black roping did very well, and was slightly less bulky.) This picture shows
the Barracuda IV suspended in the mounting frame.

The bottom plate of the frame features 4 threaded holes, and hardware for mounting
the frame came with it. 4 holes were drilled in the floor of the case to allow
for the frame to be permanently mounted there. Longitudinal encircling elastic
roping was also placed around the hard drive, to secure it when the case was
moved. The result is that the hard drive is suspended above the floor of the
mounting frame, and is very securely held. (A picture of this is shown later.) 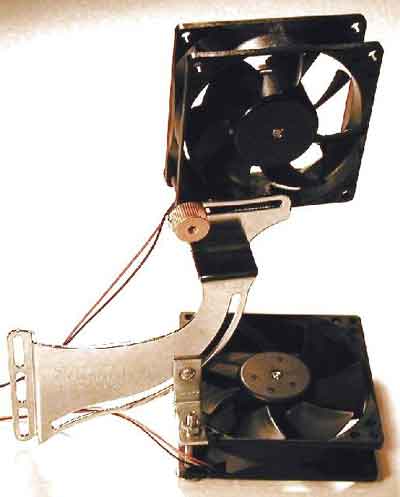 It was decided from the outset that this system would be built to run entirely
fanless, but that fan options would be included in order to test their effects
on system noise and system temperature. This picture above shows a Zalman fan
bracket attached to 2 Panaflo fans. The top fan is positioned to blow on the
CPU heatsink, the bottom fan is positioned to blow on the hard drive located
on the floor of the case. Each of these fans is attached to a Zalman FanMate
resistor device, and each will run at the lowest voltage which the FanMate would
provide and essentially the lowest voltage at which the fans would start. Fan
voltage could be controlled with the FanMates, which were positioned outside
the back of the case. In addition, the power supply for each fan could be switched
on or off from outside the case, allowing instant assessment of the contribution
of each (and both) fans to system noise and system temperature. 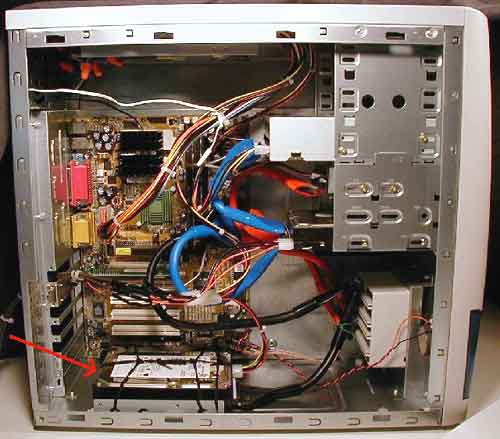 This picture shows the Barracuda IV suspended in its mounting frame on the
floor of the case (red arrow). 6-point attachment makes significant displacement
of the hard drive very unlikely. The frame is fixed to the floor of the case
with 4 mounting bolts.

The VIA C3 Ezra is specified for operation with CPU case temperatures in the
range of 0°C to 70°C. VIA recommends external CPU case temperature be
measured by attaching a thermocouple to the center of the VIA C3 package, as
the heat produced by the processor is very localized so measuring the case anywhere
else underestimates the case temperature. This requires drilling a hole through
the base of the heatsink and epoxying a thermocouple so that it is positioned
at the center of the CPU when the heatsink is mounted.

Whether my thermometer probe position is valid is open to question. This point
is moot as I don’t have a thermometer that uses the kind of thermocouple which
would make a true core temperature reading possible. Suffice it to say that
the temperatures I report may be a few degrees lower than would be obtained
at the absolute center of the CPU. Still, virtually all reports of other measurement
techniques seem to be 2-15°C too low compared with CompuNurse-type thermometer
readings.

The rounded IDE cables are very nice, a great improvement since they are easy
to position, much less vexing than ribbon cables. They also decrease clutter
and probably aid air flow. 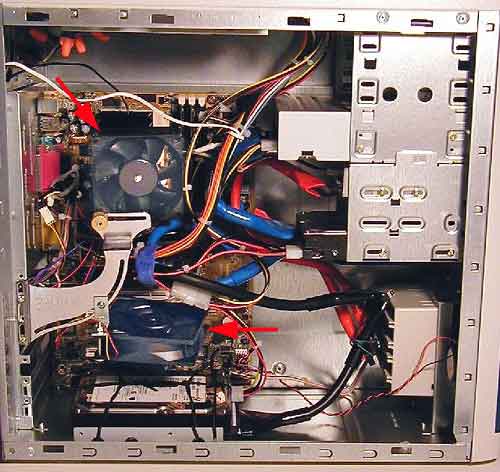 This picture shows the position of the 2 Panaflo fans (artifically highlighted
and marked with red arrows) in their modified Zalman bracket. The upper fan
blows on the CPU heat sink, the lower fan blows on the Barracuda IV hard drive.
This is the configuration of the computer at the end of the project. The side
panel was later put back on the case, returning it to nearly the same external
appearance it had before any modification was done. 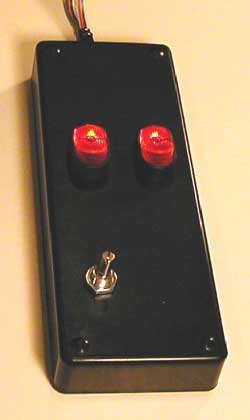 This is the fan controller. It features an off-on switch for each
fan. There is also a variable resistor for the hard drive fan. Since each fan
is supplied with an out-of-the-case FanMate, there is no need to use the variable
resistor, though. This controller sits on the top of the case, although I could
put it on my desk or in any other convenient spot. 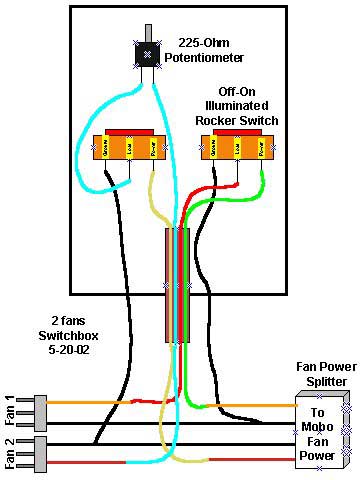 This is the schematic for the fan controller. It might have been clearer if
I had made a circuit diagram, but this seemed to be the most widely accessible
approach. My general approach to these projects is to plan for everything to
go horribly wrong. So, I never work on components: I work on extension cabling,
which is cheaply and easily replaced. All connections are made with hot-joint
solder and covered with shrink tubing. (My local electronic parts store wants
to give me a Platinum Card.) 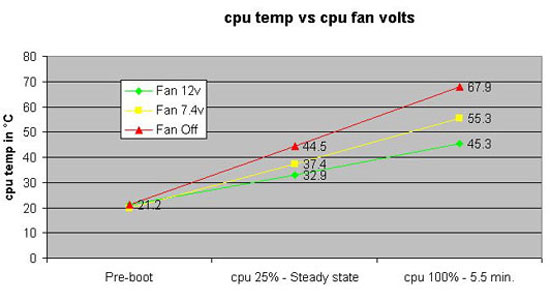 This set of CPU temperature observations was made with variation in CPU fan
voltage, under varying CPU load. The 7.4 volt reading came from testing the
FanMate on my workbench, with the resistance at maximum. [Mileage may vary.] The hard drive fan was left off at all times. The lesson here is pretty clear:
Going fanless is a possibility with this system, but at high processor loads
the CPU gets hot. The rated maximum temperature for this CPU is 70°C. In
fact, during fanless drive partitioning and formatting, CPU temperature reached
73.8°C. Although the CPU showed no signs of strain, this heating is probably
not a good idea.

Please remember that VIA said only that the CPU could run fanless. It was never
said that the whole system could run fanless. Convective cooling in a mostly-closed
box is not very efficient. Even a slight amount of air movement makes a substantial
reduction in system temperature.

When the hard drive fan is also running, there is an additional 2-5°C drop
in CPU temperature. Hard drive temperature also stays down nicely, being routinely
less than 42°C. 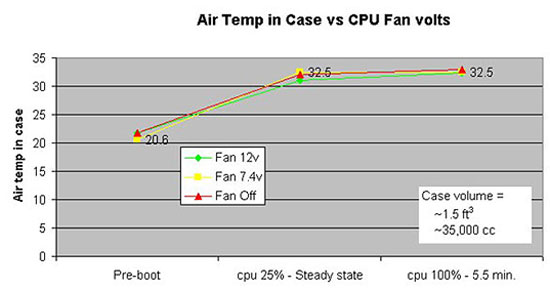 The case air temperatures tell a very interesting story. It is doubtful that
much air is moving through this case with the current fan positioning. What
is probably happening is that the heat from components is being spread to the
1.5 cubic feet (35,000 cc) of air in the case. The cooling power of this volume
of air is substantial, and the key goal in system cooling becomes elimination
of tiny areas of air stagnation in regions of substantial heat generation. This
is why the low-voltage Panaflo fans make a big difference.

It goes without saying that this analysis only holds for systems which are
not generating much heat, and for environments in which room temperature is
moderate.

This review is the first computing work that I have done on the system which
is being described. During preparation of this piece tonight, room air temperature
has been 23.3°C, CPU temperature 36.5°C, case air temperature 33.0°C
and hard drive 39°C. Both Panaflo fans have been running, and they are inaudible
from my chair. Absent the power-on light, I could not tell that this computer
was running.