Fans from Noctua & Corsair at Computex 2012 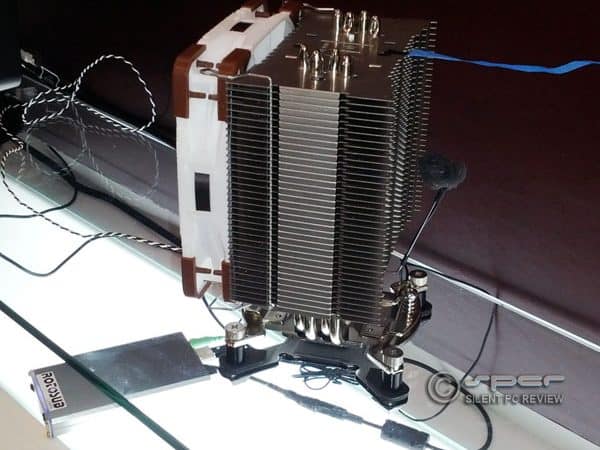 At Computex 2012 last week, there were two fan developments worthy of serious note for SPCR readers. The first and more revolutionary of the two is an Active Noise Cancellation fan project from Noctua, with partner RotoSub. The second is from a more unlikely source, Corsair, of memory, PSU and case fame.

Fans and heatsinks are never in short supply at any computer show, but at Computex 2012 last week, there were two
fan developments worthy of serious note for SPCR readers. The first and more
revolutionary of the two is from Noctua, whose Active Noise Cancellation fan
project with RotoSub I reported on a couple of weeks ago. I had the opportunity
to visit the Noctua booth and meet finally with Noctua’s Jakob Dellinger, a
man I’ve been exchanging emails with for years, and also with Lars Stromback,
one of the principals of RotoSub, a Swedish firm. Noctua has a new range of
heatsink/fans poised for launch, but by far the most interesting item on display
was the early working model of the ANC fan.

Active Noise Cancellation is not new, and many consumers have learned about
it through promotional material for headphones using this technology; the big
ad campaign of Bose for their noise-cancellation headphones comes to mind. The
basic technology is to detect the unwanted noise, then create an inverse signal
which cancels the waveform of the noise to create a null at the point where
it is heard. In a headphone, the technical challenge is fairly simple, because
all the action occurs right at the same point: At the ear. The detection of
external noise by a microphone as it comes through the headphone, the processing
to develop an inverse signal, and the generation of that signal by the headphone
transducer itself.

Noise cancellation of a fan is considerably more complex, because the noise
must be tackled at the fan rather than at the ear, and the noise itself has
some unique characteristics which makes it difficult to create an inverse of or replicate. A fan creates noise as its blades cut and beat the air, and because
it is rotating, the waveform is a series of spiraling pulses; the number of
spirals depends on the number of blades, the pulse rate depends on the rotational
speed. A microphone placed near the fan can pick up this sound easily enough,
but to cancel the noise with speakers, at least two would be needed, one on
the intake side and another on the exhaust side, because the sound from the
two sides would not be identical but in reverse phase. Naturally, this would
entail high complexity and cost.

RotoSub’s solution to the problem is elegant: A single microphone feeds the
sound of the fan into a processor which then uses a complex algorithm to vibrate
the fan blades themselves in such a way as to create an inverse
of its own noise signal. This means there is a secondary "motor" of
sorts, with tiny magnets at the tips of the blades, and a coil that wraps around
the frame of the fan.

Trying to listen to the working ANC fan model at the Computex booth in the Nangang
Exhibition hall was laughable, because even before I checked the rough-and-ready
deciBEL app on my Google phone, I knew it was around 90 dB ambient, just too
noisy. But between sticking my ear right next to the fan, and using headphones
to watch and listen to a video demo recorded a couple days before, I can confirm
that the early working model reduces the tonal noise of the fan, from easily
audible and annoying, to virtually gone. So there’s little question that tonality
can be elminated using this technology, and not just at one or two points; Lars
pointed out the many tonal spikes in the spectrum which disappeared when the
ANC was turned on. But does it do anything with the broadband turbulence? The
answer is no.

I commented in the forums that it seemed curious the Noctua NF-F12 FocusedFlow
fan is their starting point. This fairly new fan, which Noctua says took well
over a year to develop for a mere 8% gain in performance, happens to have higher
tonality than previous Noctua fans, at least as we measured and heard it. In
person, Jakob and Lars agreed my assessement was correct, and it is partly why the ANC
technology is being worked into this model. The FocusedFlow aspect of the
NF-F12, some of you will recall, is basically a flow-straightener that helps increase
pressure by directing the airflow into a more focused area. The price paid is
higher tonal noise. So as I conjectured in the forums, ANC will be used here
not to make an already quiet fan silent, but to make a higher airflow, higher
pressure fan sound quiet. In other words, to make something like a 1600 RPM 12cm fan sound more like a quiet 1200 RPM fan.

This will obviously be more useful for a power user who wants to cool hotter
components with less noise, but it will not do much for some of the uber silencers
who live at SPCR. Asked whether the technology could be used to make a 1,200
RPM fan sound like an 800 RPM model, the answer is yes, but the audible gains
are much less dramatic for most users, and the demand for such a product is far lower. Whether
such a model will be developed is too early to say; the main goal is to complete
development on the current model, which will likely take upwards of two years,
and result first in an ANC-fan and microphone with dedicated heatsink. Mic-integrated
ANC fans will come later. Expect the starting retail price of the ANC fan to
be at least double that of Noctua’s conventional fans.

Discuss this news in the SPCR forums.

The other interesting fan development I saw at Computex came from a most unlikely
source, Corsair of memory — and more recently, PSU and case — fame.
This Silicon Valley company has been expanding and diversifying steadily since
its first Seasonic-made PSUs splashed back in 2006. The biggest surprise for
me at their usual big Grand Hyatt suite in Taipei last week was a new line
of fans. Yes, Corsair also has an exciting high end series of new PSUs made
by Flextronics using DSP technology for astonishing precision and noise/ripple
performance as well as a truly accurate Window utility reporting and monitoring
of all power functions, but fans? This was completely unexpected.

George Makris, who has led the development of Corsair’s PSUs and cases, was
also instrumental in the new fan project. We talked about the challenges of
measuring fan performance, and I told him how we’d finally given up on trying
to measure airflow or pressure at SPCR, after years of efforts with home-brew
and relatively simple tools. We just couldn’t afford one of those massive multi-thousand
testers that the fan manufacturers use. George laughed and agreed it was tough,
and said fan makers had told them not to even bother trying to measure anything without one. (All
this echoed the previous chat I’d had with another fan maker, who bemoaned the
amateur fan assessment efforts of many tech web sites who base their judgements
on a single measurement from a $60 fan anemometer bought off eBay: "You
sweat and experiment and modify and fine-tune for a year, and samples go out,
and it gets sloughed off by this simplistic judgement, ‘This one measures
10% higher CFM than the other, 2 thumbs up!‘ and then you see the responses
of readers who thank the writer for clarifying, and… ohhh, it can be very
frustrating!") George’s response was, well, if we’re going start doing
fans, we better get one of those testers… which is how Corsair ended up acquiring
a $40,000 fan testing machine that they built a quiet room around. I’ve described
such machines before, and given my interest, it should come as no surprise that
I’m already scheduling a trip and visit to Corsair for a first-hand look (and
report) at their new fan tester and quiet room.

The quiet room, George admitted, isn’t the quietest, it measures ~19
dBA ambient (SPCR’s chamber, in contrast, measures 10~11 dBA), but it’s low enough to get a good handle on sound levels of most enthusiast
fans at full speed. Speaking with George for just half an hour, it was obvious
that his — and by extension, Corsair’s — expertise and knowledge about
fans had grown exponentially since the last time we chatted, perhaps a year
ago. That alone was enough for me to feel optimistic about the new fans Corsair
first introduced in May, a little over a month ago.

The Corsair fans are divided into two groups: AF for Air Flow and SP for Static
Pressure. AF series fans "are designed to intake cool air into, and exhaust
hot air out of, modern PCs." SP fans, on the other hand, "deliver
focused air pressure in situations where air needs to be blown through a restricted
space making them ideal for cooling radiators and heatsinks." This is the
first time that I’ve seen fans so clearly designed and identified for their
purpose. It makes sense, as there’s always a tradeoff between noise, airflow
and pressure for any axial fan designer. As in so many cases, you can usually
optimize for two but not all three. All the fans feature rubber corner mounts
to reduce vibration. There are five models in all, three in the AF series and
two 12cm models in the SP series. The slower speed models look most promising
for SPCR readers:

If these fans scale down nicely as speed is reduced, they could be very nice
for super silent PCs. We’ll see soon enough when samples come in.

Discuss this news in the SPCR forums.