Yet another ITX HTPC (56k warning)

Yet another ITX HTPC (56k warning) 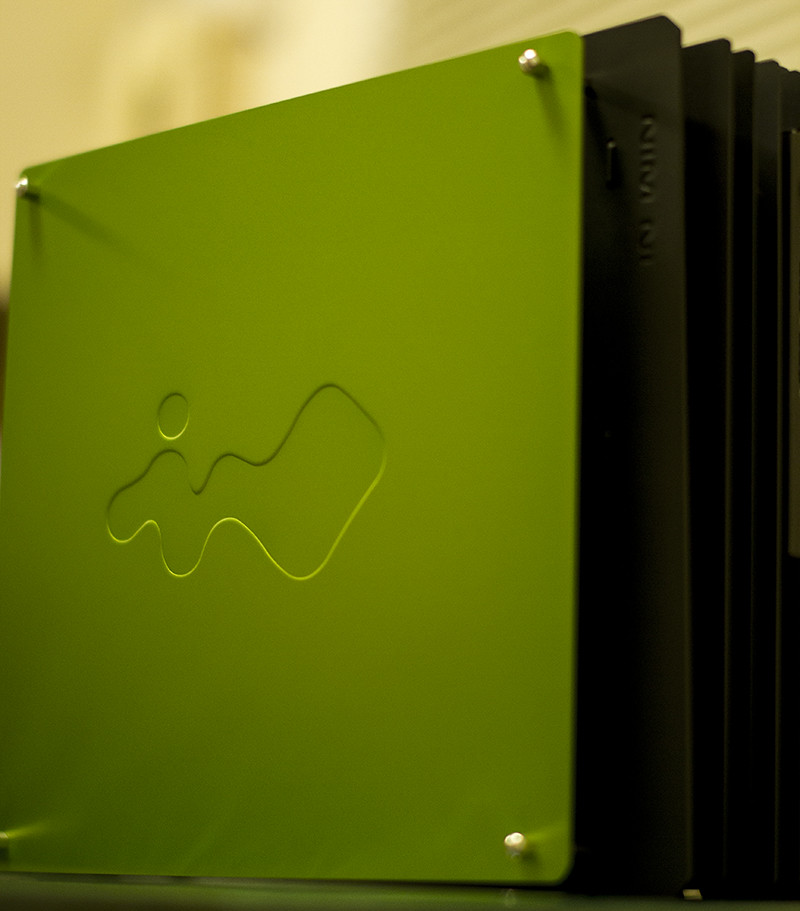 Here we have the InWin H-Frame ITX case with 180W power supply I reviewed just a few days ago. 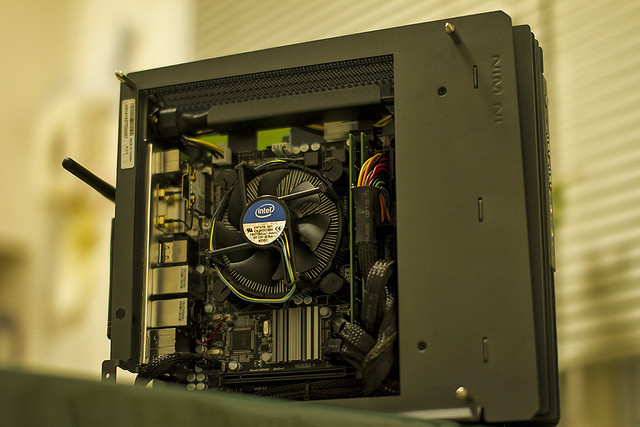 Inside, we have the following components:

It's running the latest beta of SteamOS, with full root access with XBMC installed.

The machine is positively silent at idle. When it first turns on, like most stock coolers, the fan ramps up, and slowly goes back down. The motherboard has a "silent" profile for the fan, however I have it manually set to the next increment up from that, as to combat the heat that's generated from playing games. The Intel 4400 graphics is absolutely no slouch, and in all of the games I currently have tried, it's been more than up to the challenge. There's no lag whatsoever as well. 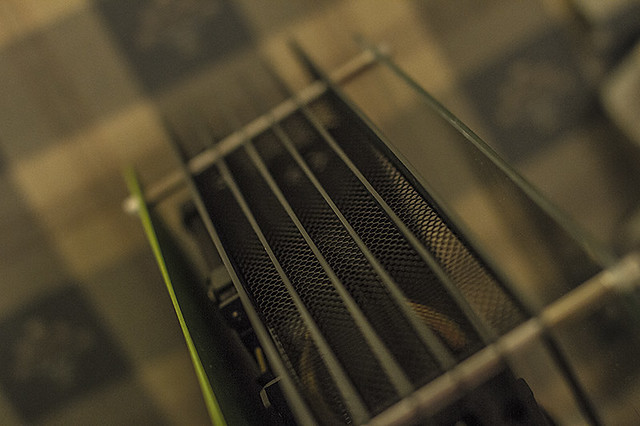 The top of the case has this great mesh to prevent anything most debris from falling into the case, and also makes the system look very neat. 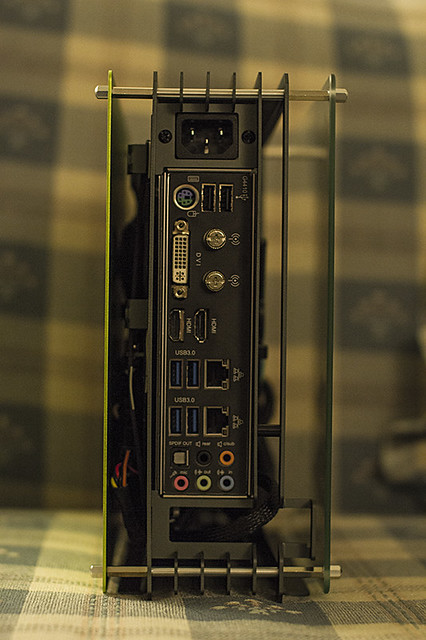 The rear IO panel has 99% of all the connectors I would ever want, the only one that would have been nice to have is eSATA. In the future, I can always add an eSATA bracket to the back if I need it, but it's unlikely I ever will, as there's space for another 2.5" drive in the case as it's set up right now. The front panel has two USB3 ports, headphones, and a line in jack, though with two HDMI outputs on the back, it's unlikely they headphone and line in will see much of any use.

Originally, the motherboard had some regular SMA connections on the rear panel, but in an effort to not only hide things better, but to reduce the chances of anything being damaged during travel, I sifted through my bin of spare parts, and found the perfect antenna for the job. It's from a Dell laptop (which one, I couldn't say at this point), but it's a one piece antenna that has 4 screw holes on it. Initially I was going to hide it around the front panel connectors, but it was too obvious there, so I attached it by the slim ODD. The next time I take it apart, I think I'll actually stuff it under the disc drive, but for the time being, wifi and bluetooth function exactly as they should, no sign of major interference as it is set up currently. 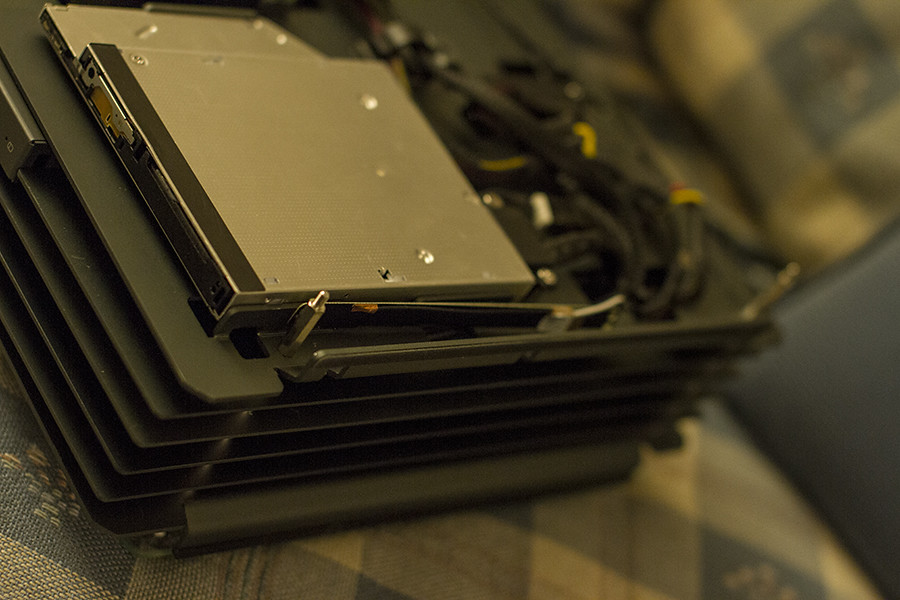 Being set up with the SteamOS and XBMC (along with a normal linux desktop) means it's fully functional as a regular computer, but has a dedicated Steam launcher for gaming. The interface is controller friendly, and I have it mapped to a Playstation 3 Dual Shock controller over bluetooth. A simple script available from reddit made the setup very simple. Mapping the controller correctly was more difficult. The dual HDMI outputs will come in handy in the future, for Let's Play or Twitch type live streaming of games, where I can play on the TV, and duplicate the output to a capture unit on another computer, in an effort to keep as much power as possible out of the i3 for the games it'll be playing. Nothing will be strictly intense, but for quality of the video output, the dual HDMI will be a handy feature. It will also help for capturing full resolution screenshots in games that don't support a screencap function.

The system is picky, and has had issues connecting to wifi networks that are set to AES encryption only, but this the only problem I have noticed so far regarding the wireless function, or anything else for that matter. Once I get the final parts for everything, there will only be a small bluetooth mouse/keyboard unit and the PS3 controller. The wiring on the back will be only the HDMI output and power in. The dual ethernet will be used for other media center devices that do not have wifi support, shared from the wifi connection. USB3 will be used for watching movies off a USB drive if needed, as it will have better file support than my blu ray player, which only supports .mp4 format files, encoded very specifically. 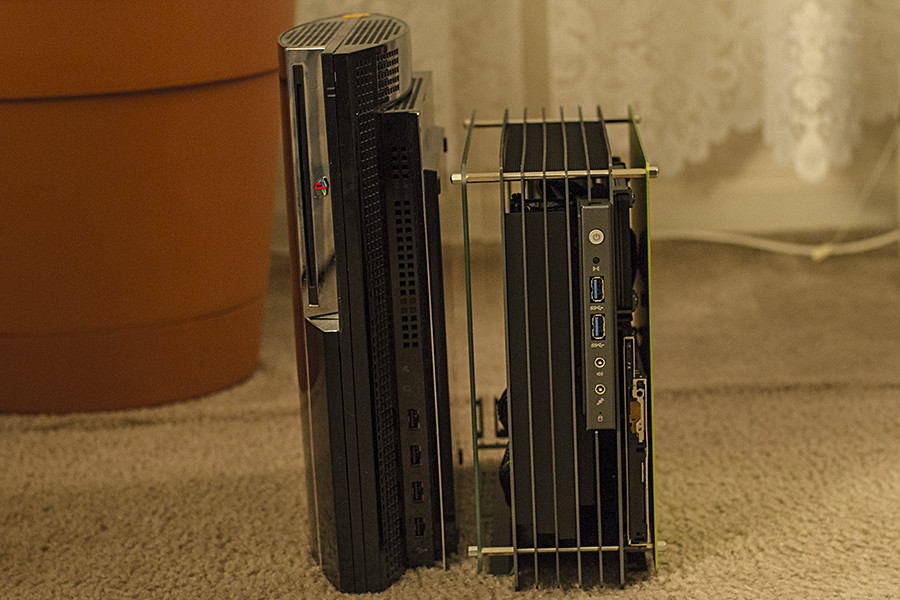 Eventually, the DVD drive will be replaced with a blu ray drive, and over time I'll find ways to integrate netflix and hulu launchers, but for the time being, my dead silent blu ray player more than handles those tasks. This build was not an effort to de-throne the PS3, but just an exercise in doing something different for myself, as I don't often get the chance to play around with hardware like this. I'm not a huge gamer, but I prefer console gaming, and the SteamOS allows me to somewhat bridge that gap

The system will also be a display model at my shop, along with at a couple local game stores, provided it can be locked into a display cabinet while it's there. For that, it may get some green LEDs to draw attention, but once it comes back to permanently reside with my media center, there will be no LEDs, and more than likely it'll get a Noctua cooler to keep the temps down further.
Top
Post Reply
1 post • Page 1 of 1