This is a late upload, i been using this PC for a year now, and never posted, part of it was because i was waiting for the GTX1080Ti to use the Prolimatech MK26, but since all the cards i seen are coming with 2.5 to 3 slots (aside from a few), and most are using new cooler with direct contact to mosfets, so upgrading toward MK26 will be much harder dealing with little heatsinks and actic alumina, so i decided to upgrade the GTX1080, and share some photos of it, not that many as to me its late post.

If you wish to the see the past iterations of the build GameMi v1 and GameMi v2, mostly GameMiv3 was created to test AsRock, and to my surprise it work really well, no issues to report, and their bios fan control is to me the best in the market with 1% variations with 1C changes, no restrictions at all, so its up to the user to setup up everything. Another reason was to test Prolimatech Genesis and MK26.

Here is a couple of pics of the build, 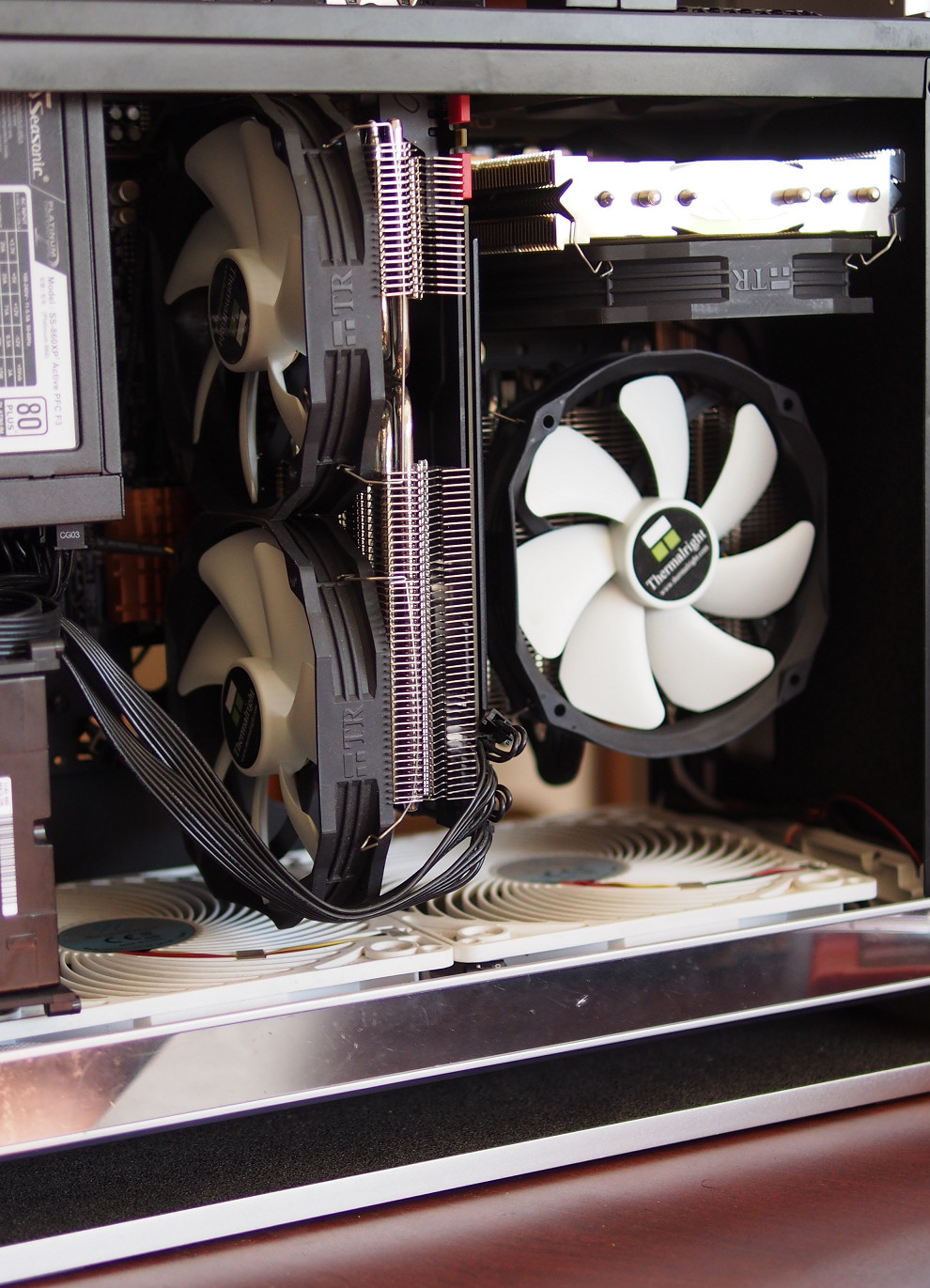 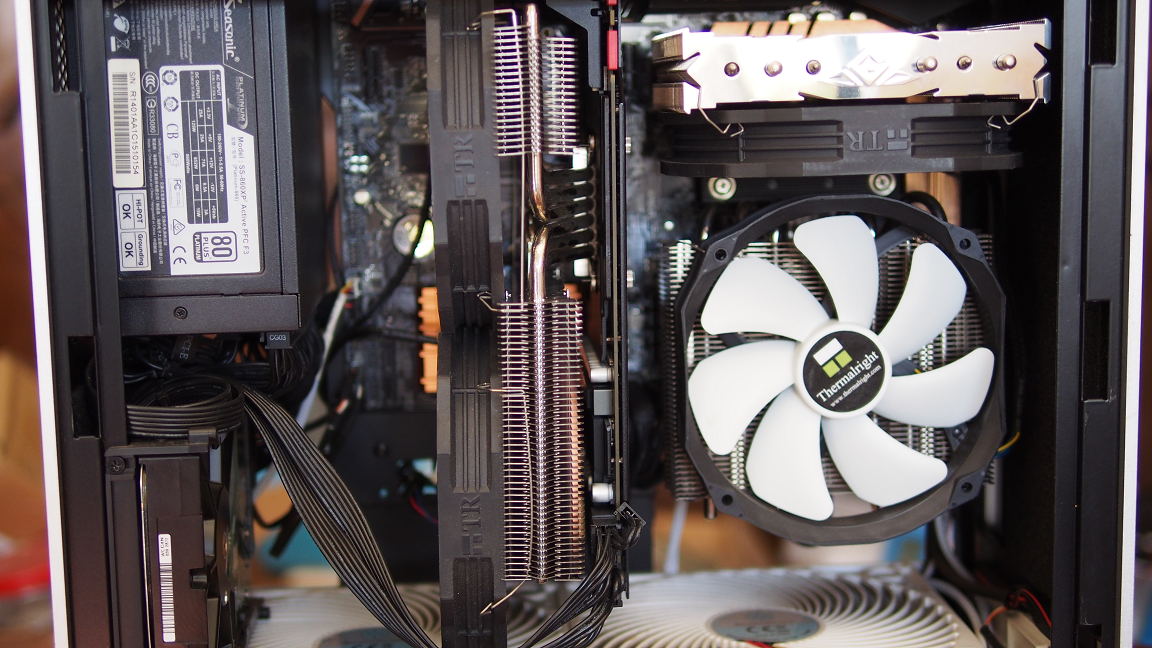 Had to cut the sides of the TY147A to fit better on the MK26 and to fit the FT05 couple of mm space after the mod, but its working fine, idling at 300rpms =) 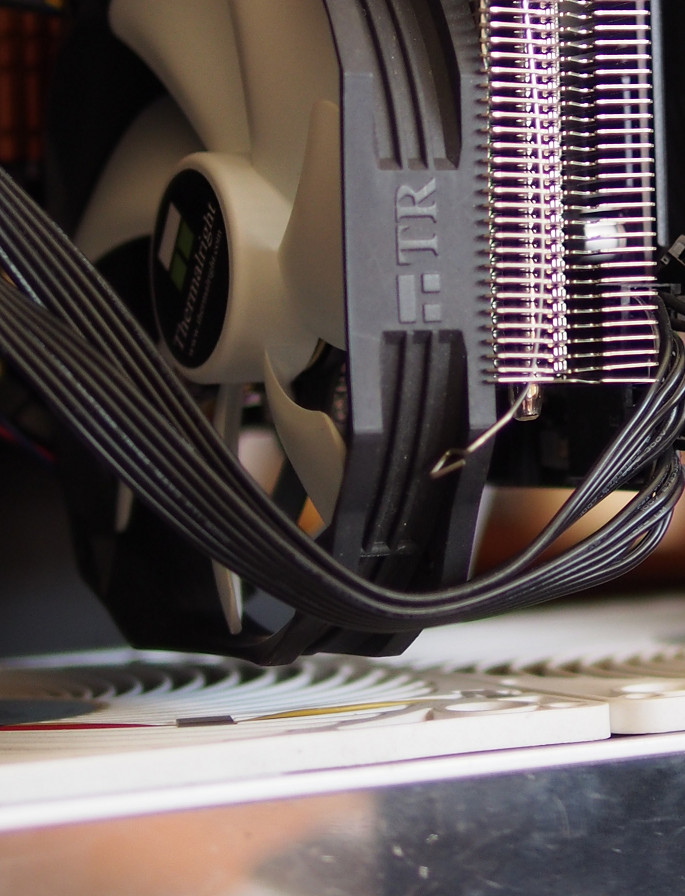 Do, how's the temps like, and what rpm on fans?

Nice build though, similar to mine!
Top

Nizr wrote:Do, how's the temps like, and what rpm on fans?

Im sorry for the late reply, but im not home atm, im out of the country for six weeks so i have not been able to test it that much.

But for what its worth, on the limited time that i have been testing, playing games like Diablo3, WOW, League of Legends and Overwatch (those are the games that i play when i have time), the upgrade of cooler didn't net much, i kinda think the pipes of the mk26 dont like the vertical orientation, with the standard cooler with the AP182 at 550rpms i usually hit 84C on long gaming sessions, with the MK26 i was surprised it hit 90C for a brief time, usually around 80C on load, but at the same time i didnt limit the FPS, so it was rendering at 4k and around 140fps, once i limit them to 59fps the temps never pass 63C, that said, i still have my doubts into the efficiency of the MK26 on an vertical alignment, the cooler is massive, really huge, if you compare it with the coolers that come with aftermarket coolers, its like twice as high and at least one PCI wider, so it has the mass to handle better the heat, but on the FT05 is not that much better, i think its more with the pipes and vertical orientation, but maybe ill take it out when i get home and test it on the open bench to see if i get much better results, that said, the Arctic Accelero IV was much better overall, but i never really tested with GTX1080, but with the GTX780 i never pass 68C playing extended sesions (more than 6 hours). One interesting thing, is that Genesis is much better than i thought, even with the pipes being vertical on a part of it, gaming i never pass 55C, and in prime95 around 70C on stock clocks, this is part of the reason that i feel the GPU is also struggling with the MK26, as now the CPU temps are lower.... and the case fans dont ramp up that much.... ill have to do more testing, just atm too busy working ='(
GameMi - Intel i9 9900K + Gigabyte Z390 AM + Asus RTX2080Ti Strix | MiniMi - Intel i7 8700K + ASRock Z370ITX + MSI RTX2080Ti
StreaMi - Intel i9 7940X + AsRock X299 Taichi + Asus GTX1080Ti Strix | WorkMi - AMD 1950X + AsRock X399 Taichi + MSI GTX1080
ServeMi - Intel Xeon E3-1230 + Supermicro X9SCM-F + 144TB | StoreMi - Intel Xeon E3 1240v5 + Supermicro X11SSM-F + 42TB | CamMi - Intel i7 4770K + MSI H81i + Blue Iris
Top

Instead of a bench test, just rotate the case 90 degrees so the MK26's heatpipes are sideways instead of vertical. See what happens.

This looks a great set up. I might do a FT05 build and this is something to look after.
Top

CA_Steve wrote:Instead of a bench test, just rotate the case 90 degrees so the MK26's heatpipes are sideways instead of vertical. See what happens.

Alright Steve, here is the test you suggested, saldy i can discard the MK26 operates better horizontally, the difference was 1 degree well with in the margin of error, i leave you the screenshot of both tests (disregard the rpms on the HWmonitor on the GPU fan TY147A, the max it reaches is 1330rpms but sometimes it glitches the reporting, the 1926rpms is just a false rpm readout). 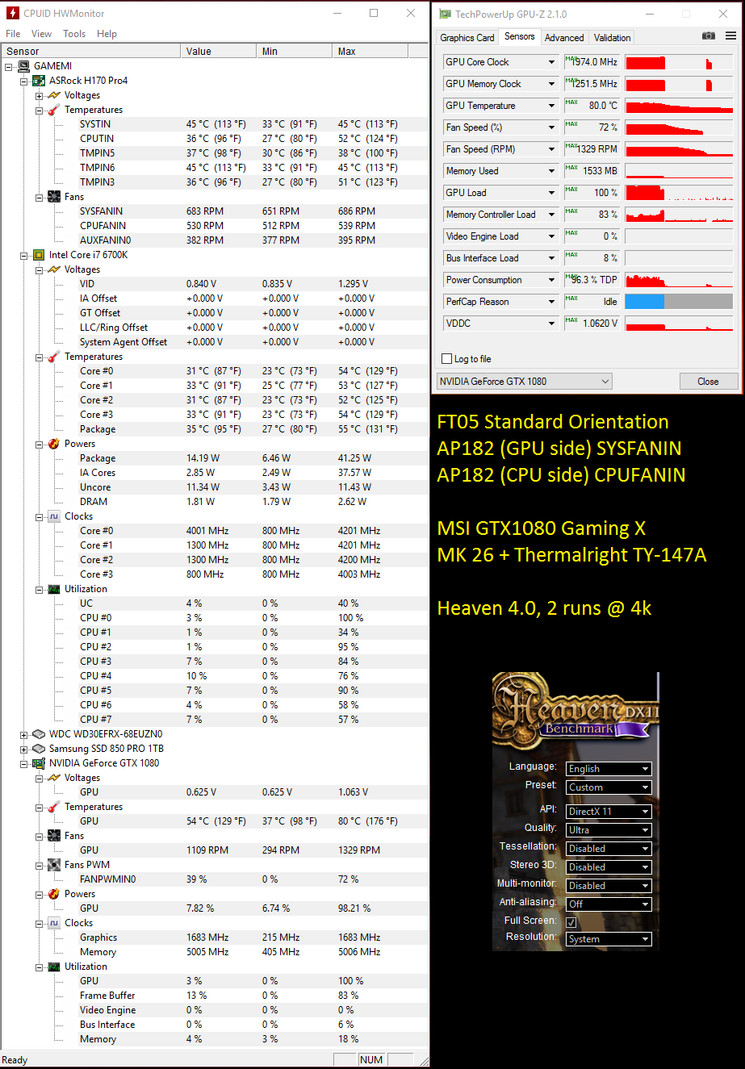 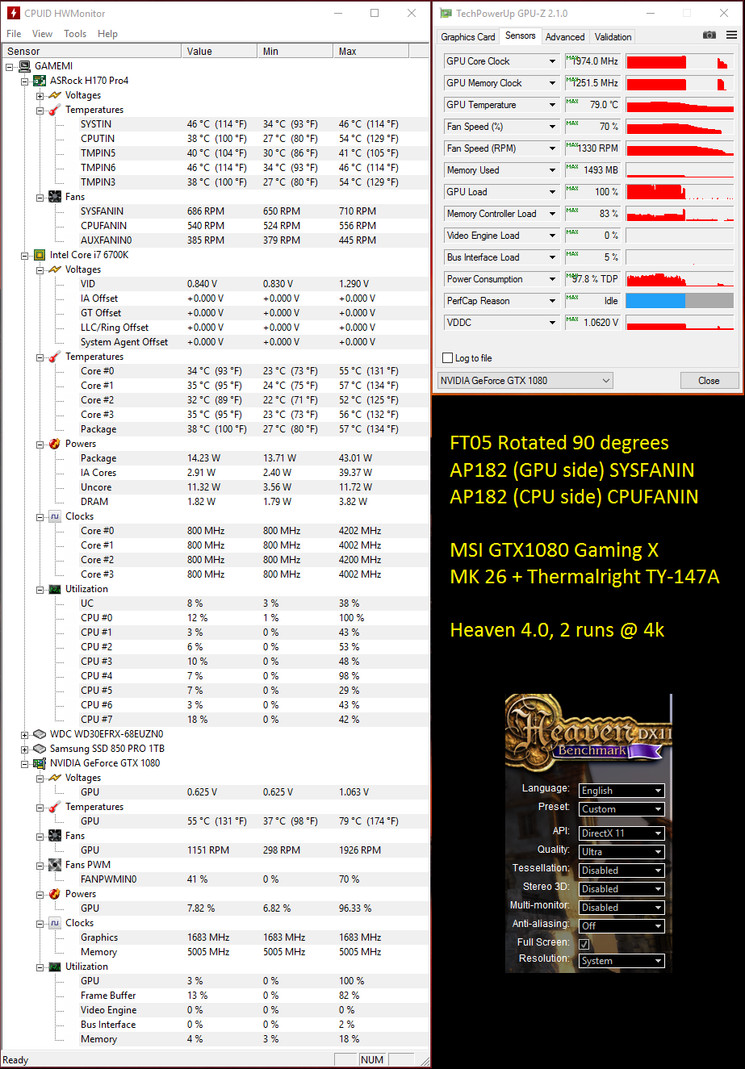 I did an extra test, standard FT05 orientation but bumping the rpms on the AP182 to 1300rpms (its loud), and the gains were 2C (disregard the fan rpms on GPUz its again a glich on the reporting). 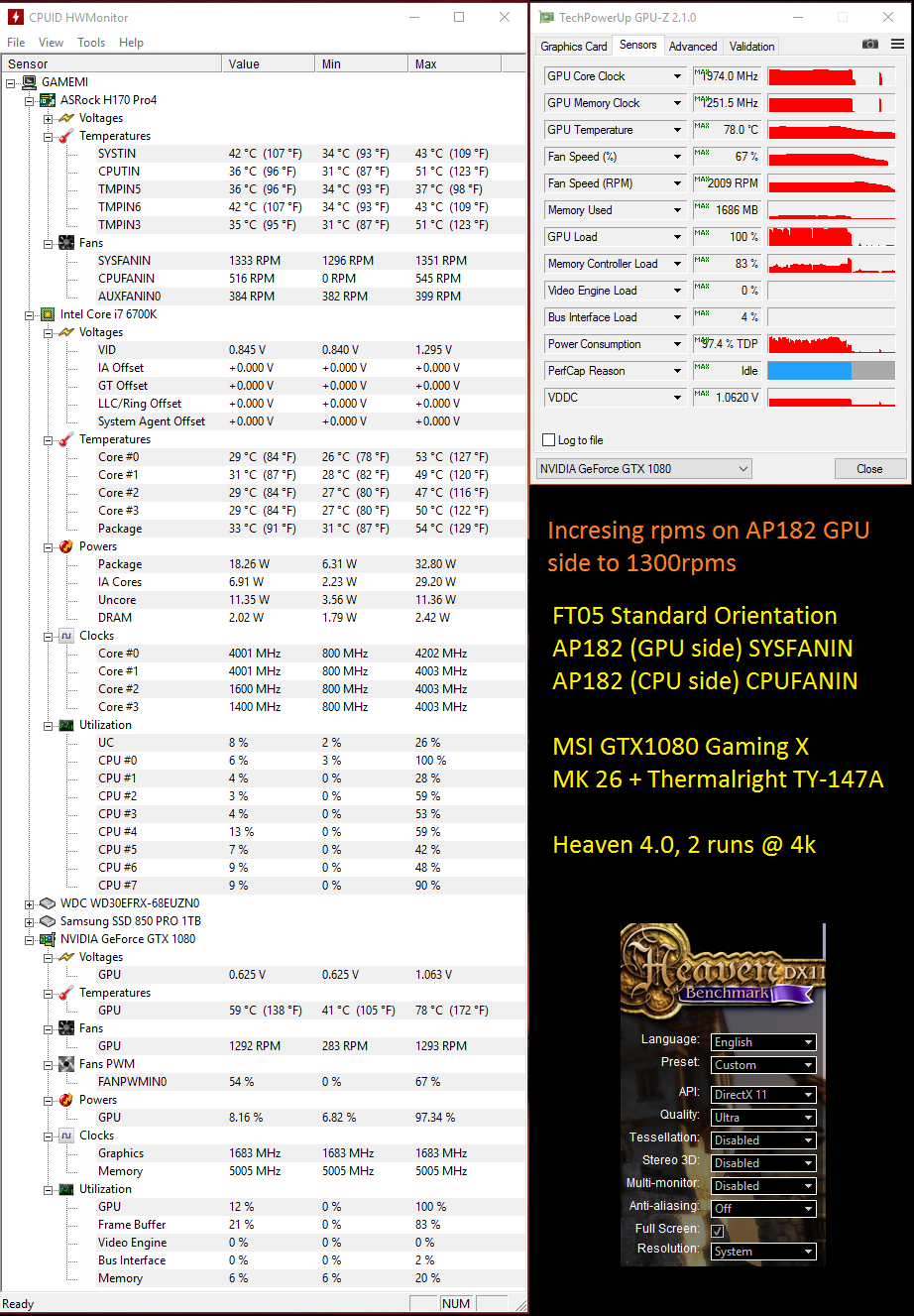 Idk yet, cant say for sure. Upon testing more, i saw the later test were going higher in temps, like the 1300rpms ap182 didnt neted much, so i decided to re run the 660rpm on ap182, and this time 3 runs (or 4 i don't remember if i counted one lol), but yes it temps went up, all the hardware being stressed over time do have an impact on the inside temp, and thus the test went up, ill leave you screenshot, sadly i didnt do past 3 runs, i feel it will continue going up, slowly but each pass it goes up, until it reached like a equilibrium, thats if you your cooling is enough or you reach the place where you loose the boost clocks. I cut the 143 sides to make them fit as i did the 147A, and mount them, and tested, but this time i let Heaven run for an hour or a little more, for sure more than 15 runs, i watch the last 5 and it never went up, so it did stabilized. I leave you both screenshots, 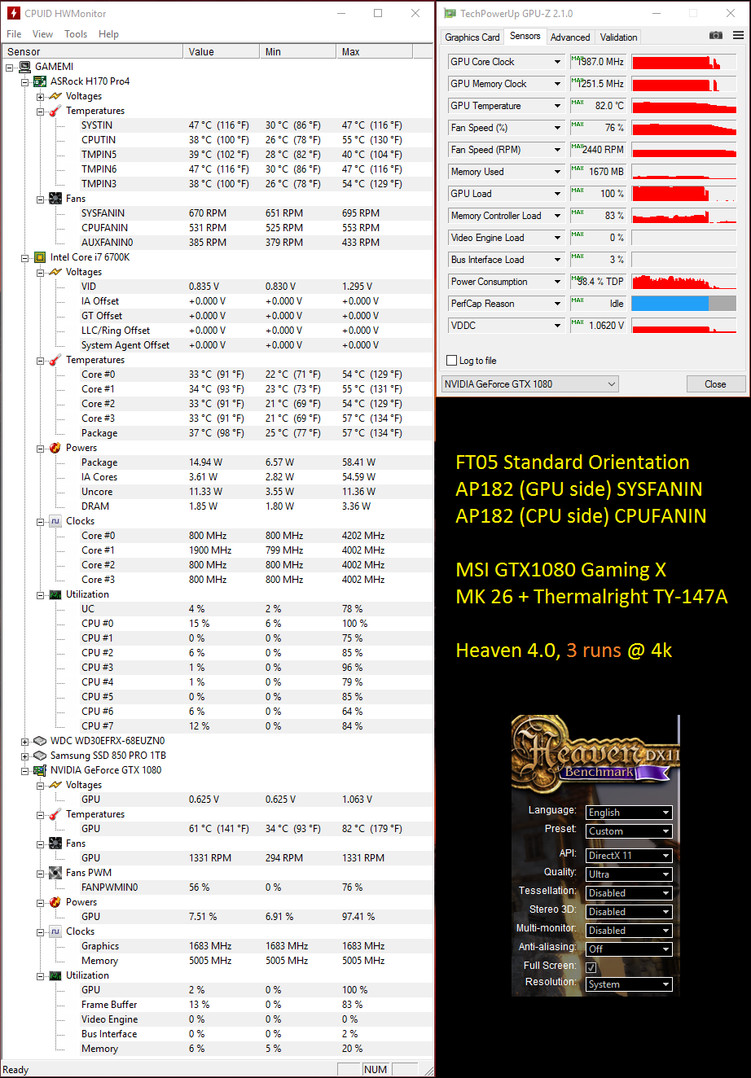 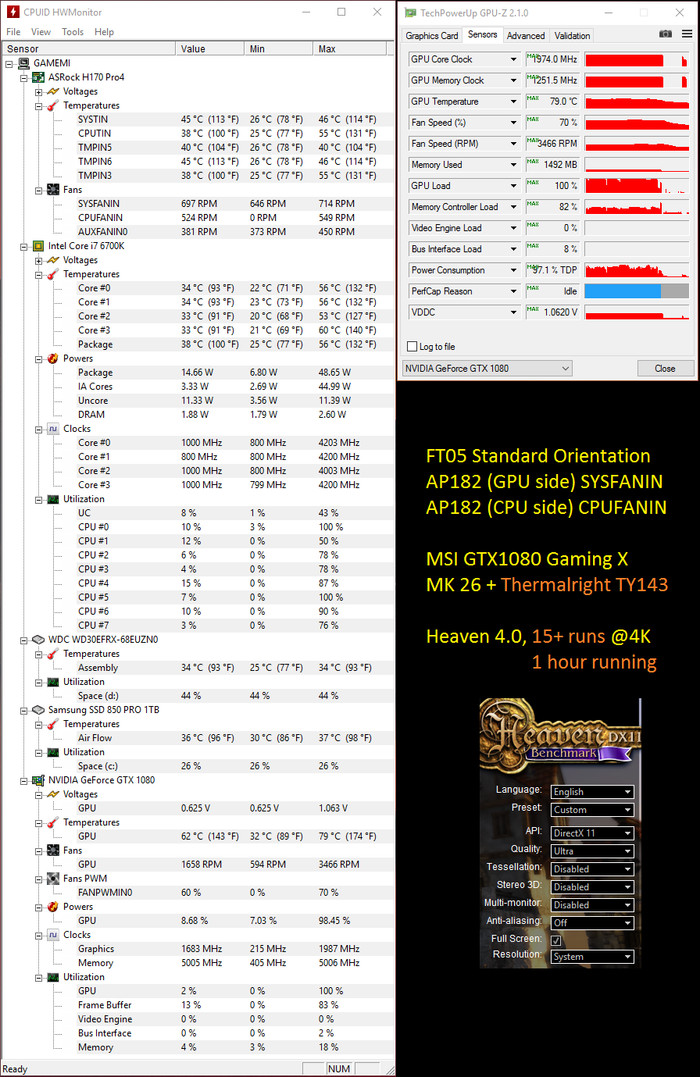 No fancy pics, but i took one with the celphone, Disregard top rpms on the GPU fans, as the thermalright fans do have some glitches reporting, the most the TY143 reached that i saw was 1730rpms

ill leave a test of the TY143 on fanXpert3, although the PWM of the GPU around 70% gave around 1730rpms, here shows 1800+, probably there are some slight difference between both, 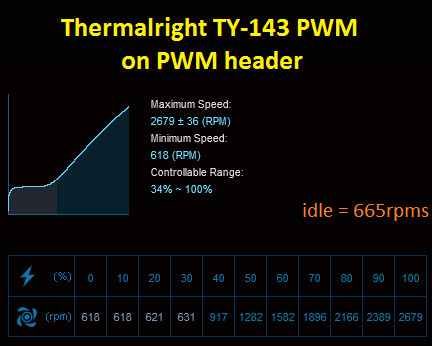 I was going to test the Prolimatech Ultra Sleek Vortex and the stock MSI cooler, but i want to give some time, i want to see how the TY143 behave in games, as heaven is a pure 100% load test full time, and games are not like that, that said i do game more than one hour, the TY143 past 1000rpms are noticeble but quiet, past 1300rpm start to get louder, around 1700rpms they very noticeable, not jet engine like, but not my flavor of sound, but thats around where they got on heaven. I do like the TY143 never really got past 79C so the boost remain fully, and the fans still have about 1k rpms left on them, not saying i want to experience the liftoff, but i feel gaming its going to be different, as the GPU will not be stressed 100% of the time, but its more to see how it runs, i might still do the other tests later on, but for now thats it.

Are you monitoring the air temp going into CPU & GPU coolers? I'm going to make a wild guess you have not done this yet, and that the air temp into cooler is higher than room .. especially the GPU.

I think I would try setting case up on some 40cm tall blocks to see if it improves airflow to bottom. 180mm fan has about 200sq cm of airflow area, so 2x fans have 400sq cm airflow area. 4cm base clearance is about 250sq cm. If you have any plastic spray can caps, they would work .. or hockey pucks, kids play blocks, etc.