This build was planned a long time ago, but really never had much time until now. This was suppose to be an update of my HTPCMi build, but Steve didnt believe on the SOLO II to be able to handle the GTX1080Ti and my modding skill =P. This build will do two things only, play movies and SIM Racing, for the SIM racing i couldn't use my main PC due to number of things, like the physical space where the RIG of the seat/steeringwheel/shifter is, and because mostly on VR i needed two HDMIs, one for the TV and one for the Oculus Rift.

Components of the build.

Not much to say, i just finished the build, havent tested that much aside from setting up the bios fan control and tested a little with Heaven4. Overall the Air 740 is a very nice case to work with, a lot of space both on the front and back, cablemanagement is pretty easy, hell you dont even need to do much, just to make sure the excess cables are on the back. I did do a small mod, as the hdds are mounted on the back, always like to have some ventilation to my mechanical drives, so i cut some holes on a hdd tray and mounted a the noctua 92mm fan, thats about it. I leave you some photos of the build, 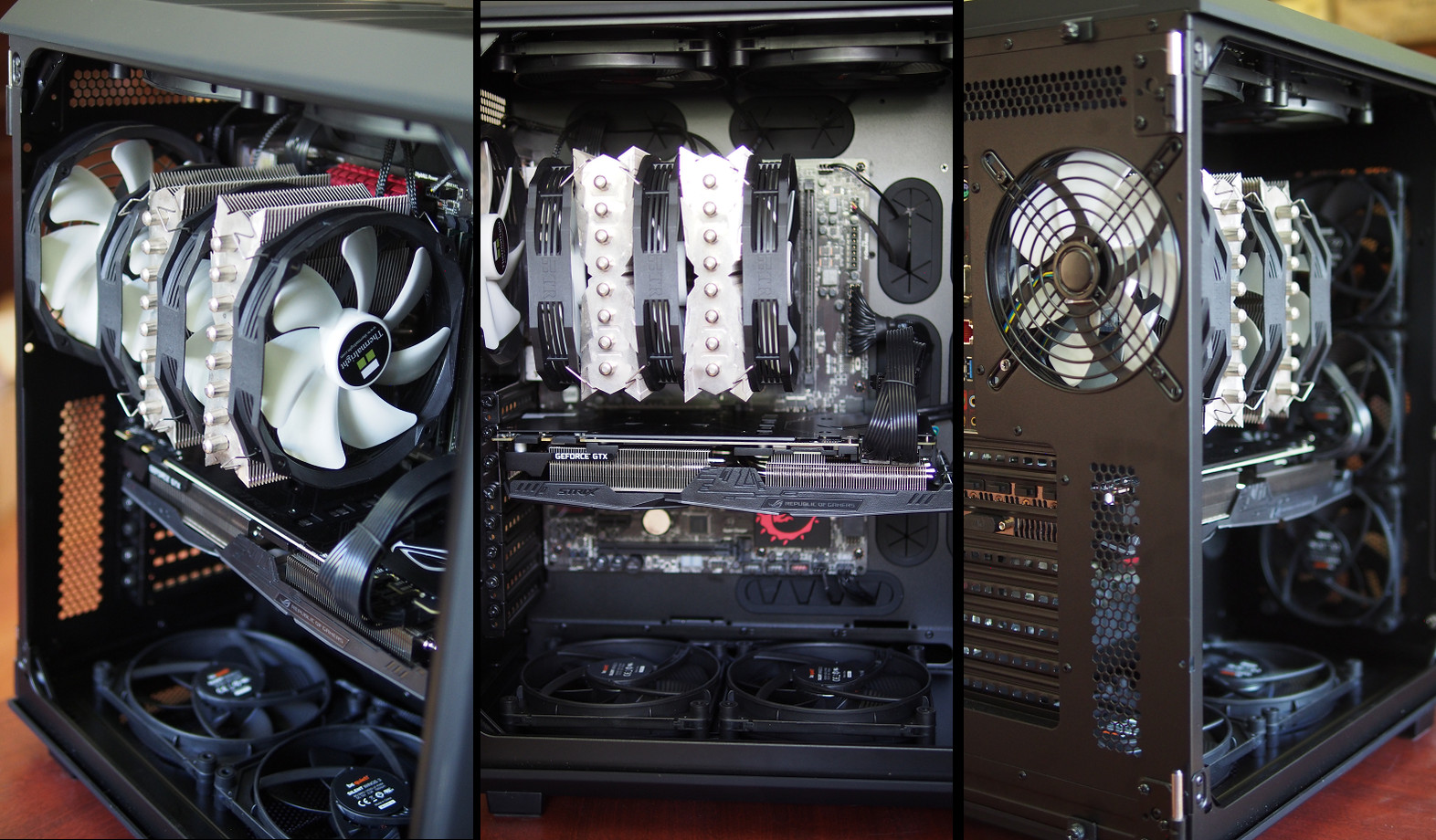 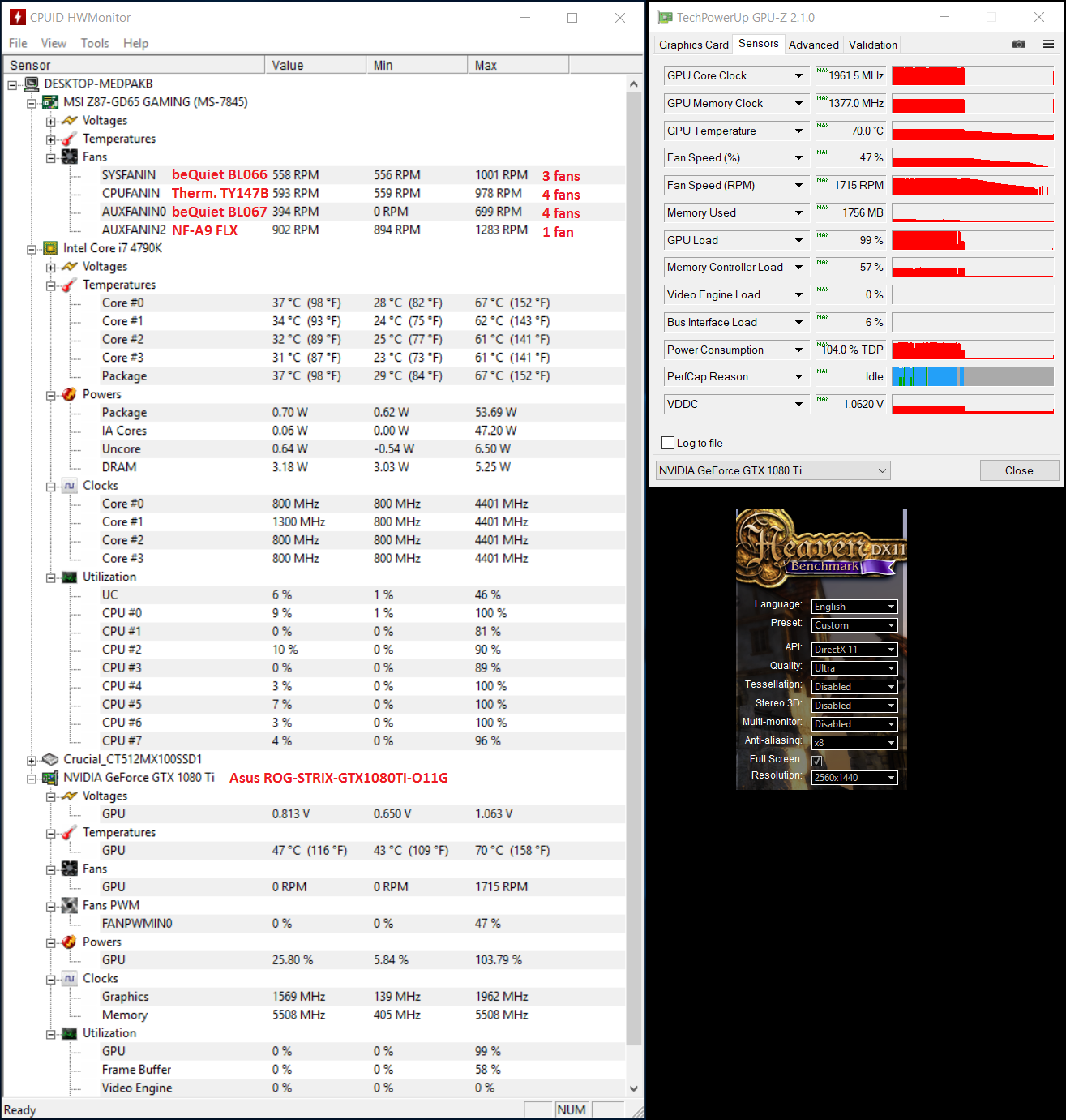 On idle its inaudible 3 feet away, most of the fans are spin down between 400-550, aside from the 92mm that spins around 900rpms at 6.5V, but because of its size you cant hear it either. As the build gets loaded, all fans ramp up some (check the HWmonitor pic above), still very quiet, although they do become noticeable, to my surprise the Asus GTX1080Ti is not as noisy as i though it would be, in the past the Asus GTX970 Strix was very noisy once the fans reach 2k+ they become a jet engine, this is not the case here, i ran heaven4 for an hour and the fans didn't even reach 1800rpms, where they are noticeable but not loud. I still have to do some more testing and tweaking, including playing with iRacing and seeing how are the temps, as atm the 1080ti barely hit 70C on a heaven, so there is at least 10C that i would give up for even quieter operation, and asus has what they call a Quiet bios that i might try if everything works out, but thats about it for now, im going on the road, so i wont test much for the following month.

Btw in case anyone is wondering, the Seasonic Prime 650W Titanium didnt have any perceivable coil or electrical noise at all, and i couldn't hear the fan under heaven4 load.

but Steve didnt believe on the SOLO II to be able to handle the GTX1080Ti and my modding skill =P.

Call me a skeptic.

Good lord, it's like a fan store in there! Nice temps, though.
Top

Nice build! The TY-147B slotted housing is supposed to change sound and airflow slightly, but I didn't notice any difference in any of the applications I tried them in.

Here are specifications. TY-147 B has a different bearing, slotted housing and is 1dB quieter.

Update looks like there are two strix designs, the larger you have on the new GDDR 5x model. Examples of non Ti's below.
You do not have the required permissions to view the files attached to this post.
Top
Post Reply
4 posts • Page 1 of 1