My quiet but warm rig, Bequiet Silent Base 800

My quiet but warm rig, Bequiet Silent Base 800

My old computer was around 8 years old, starting to show the signs of age... The coolermaster case was very dusty and the lack of sata3 annoyed me so much, time to build a new one.

The main mod I did was to remove the useless frame behind the front fans. They do not hold the HDD cadges nor anything else, it seems to be merely a design flaw or just price-cut. Cutting most of that part to improve airflow seemed worth for me.
At first I wanted the FractalDesign R5, but was very hard to find. Locally I only found the model C with the useless side window, very pricy and not "in stock" so I would have to wait 60 days.
A few weeks after I ordered the SB 800, BeQuient launched the model 700

(fixing this useless frames behind the fans, and many aspects of the 800), and a week after that FD launch R6 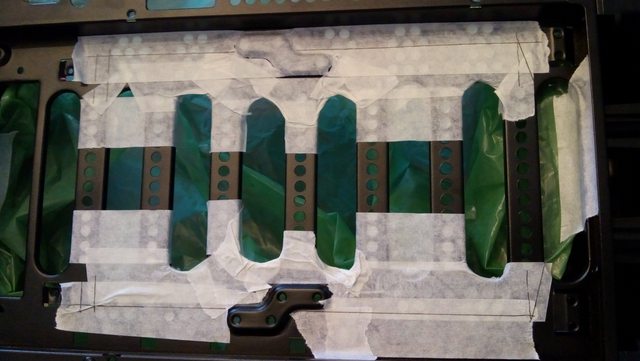 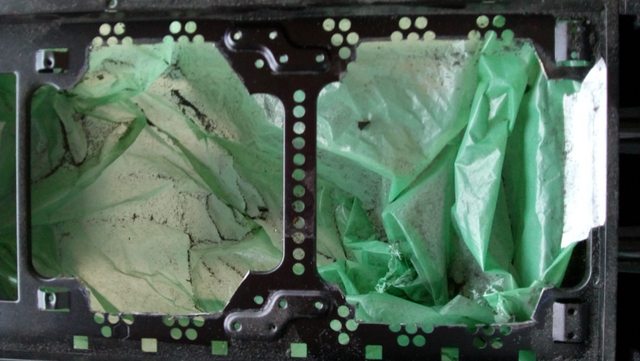 The plastic bag was intended to hold metal pieces and avoid a mess on the case. It turns out I was deeply underestimating the dremel + steel, and made a mess anyway. 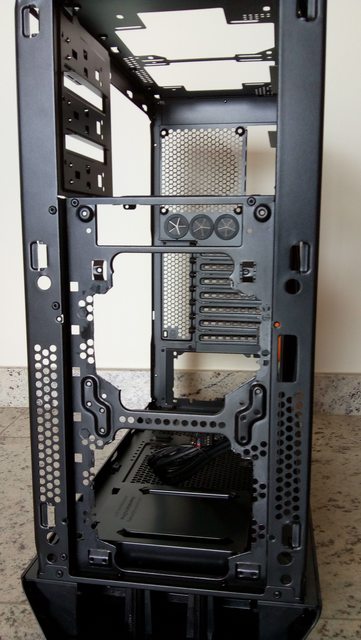 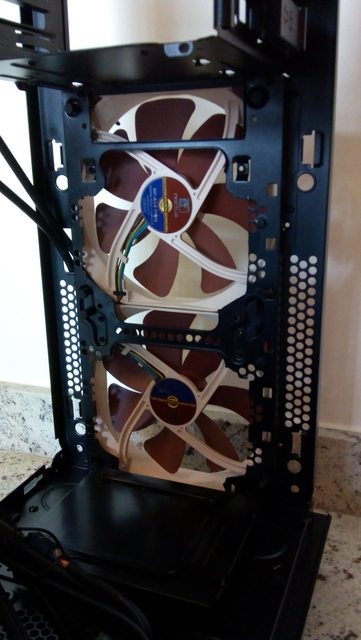 Here is where the assembly problems start... The Noctua rubber screws are meant for M3 screw holes, while Silent Base 800 front mountings are M2 (or M2.5?), so they won't fit.
I had order some generic ones from china (i can post links if anyone wants), which I didn't mind trying and breaking it. They ended up fiting well as long as I don't pull all the way. 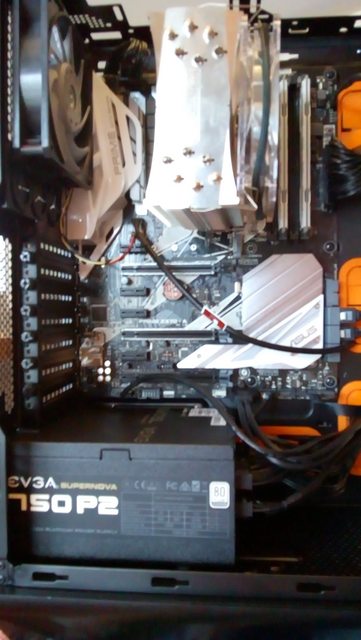 The heatsink is huge, but as planned it fits inside the case without any issue.
I also had to buy a universal mounting adpter from Thermalright, in order to use it with LGA 1151.
A pain in the glass was replacing the fan on the heatsink after it was attach to the motherboard... I decided to change the orientation of the fan, in order to have the cable away from the blades. Those mounting wires are really hard to get in place, its hard to see if you're inserting in the correct whole and its hard to maneuver inside the case with everything installed.

You may also notice the back fan is not a Nexus as I mention, but rather a Nide Gentle Typhoon. Its not gentle to my ears... that's why I replaced. 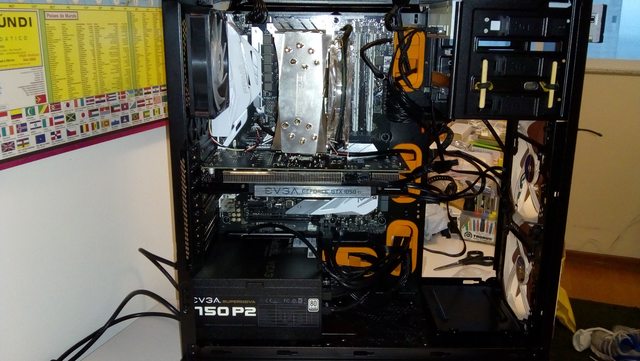 At this point the cable management was not complete.
And finally, one of the biggest improvements: HDD vibration isolation. 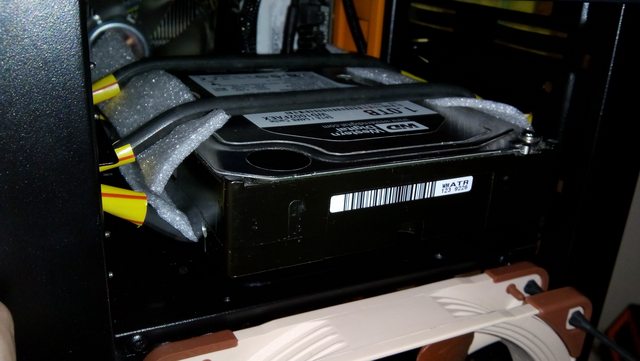 This works great, I hear nearly nothing. The (yes, McDonalds) straws are there to prevent a possible cut from the metal on the rubber, and the foam to prevent HDD edges from cutting the rubber.
But I am having another problem now... Due to the case design and HDD position, it gets almost no airflow at all. I am always getting temperatures above 39 C

. I am thinking in a way of hanging from the top, just enough to be in front of the Noctua fan.

My second big issue: Asus AI. It's far better than the old speedfan, with the ability to use graphical approach etc. However it does work properly. From time to time it will simply shut down the front fans (or even the CPU fan!) for no reason

. I double check and "auto-fan stop" is not marked, the temperature readings seem correct and according to the grap it should be spinning. I might just abandon this %*@& of software and use the BIOS configuration.

Case criticism:
The bottom dust filter is removed from behind, after a few weeks of use I realized this is a considerable drawback.
The front fan door (looks like castle gate?) does not have a limit to what extend it can open, its fairly easy to forget about and scratch my leg (or even break the plastic hinges?).
This same door is held close by two press-release mechanisms (why not just one????) and they are part of the dust filter. This means that if you remove the filter the door will never remain closed/locked.
The dust filter does not cover the whole area of the two 140mm fans, the top part remains behind a solid plastic frame part. That has a notch for the filter to lock in place.
The front intakes look large enough, but looking from the inside they are full of large plastic support which is very obtrusive for the airflow (FractalDesign approach with horizontal plastic seems a lot better).
The top and bottom parts have no sound damping material at all. I know their contribution is minimal overall, but it just feels wrong to me.

Re: My quiet but warm rig, Bequiet Silent Base 800

The R6 seems terribly asthmatic to me. Not an improvement!


R2_ wrote:The main mod I did was to remove the useless frame behind the front fans.

Why not just increase the hole size to meet the generic standard?

As for cooling the HDD: Is it possible to make some baffle to direct some airflow from the upper fan towards the HDD? (Looks like the cage has a solid bottom that would prevent this unless you cut up a major venting hole in it.)
Top

Re: My quiet but warm rig, Bequiet Silent Base 800

39C isn't horrible. However, four holes in the bottom four corners of the drive cage would permit you to suspend the drive just below it and in the flow of the upper fan.
Top
Post Reply
3 posts • Page 1 of 1