Came across this today:

It's nice to learn that Antec will be providing some Mini-ITX enclosures. Very difficult to see what it looks like though.
Top

I imagine it's easier said than done, but wouldn't it be cool if they could scale an NSK3480 down to the mini-itx form factor, just like they did for the Mini Skeleton? Maybe it'd have an 80mm case fan, which you'd then use a Ninja Mini with.

I can't imagine a person willing to pay a premium for mini ITX only to have it be obnoxiously loud. The form factor lends itself so well to using a single 120mm fan either at the top (if the motherboard is placed horizontally) or on the side (if the mobo is placed vertically). It seems like a such simple design yet noone gets it right.

60mm is worthless I agree, but 120mm seems a bit overkill for a mini ITX system. It's not bad as such, but a single quiet 80mm fan should be able to do the job as well.
Top

I would disagree that 60mm fans are worthless. Any fan, even small ones can be quiet if they spin slow enough. And given that mini-ITX boards are generally built around low-powered parts, the case shouldn't need the amount of airflow that a 120mm fan would give you. And making a case that would fit a 120mm fan would require it not to be so mini anymore defeating one of the reasons for the form factor.

I guess we'll just have to wait and see how it works out. Hopefully the fans they pick for it are decent.
Top

A 60mm fan that's spinning at anything other than jet turbine RPMs, does not move any air. A mini ITX motherboard is 170mm by 170mm. That leaves plenty of space for a low profile cooler and a 120mm chassis fan above it, if you're opposed to the cube shape.

There are some very nice mini ITX motherboards available, as capable as any micro ATX board. 780G, G45, boards that support Core 2 Duo CPUs and PCI-E x16, etc. These chipsets require good airflow, something two low RPM 60mm fans won't be able to provide. Mini ITX's dimensions are still greater than those of a 120mm fan. It's just silly not to use one. You're comprising cooling and noise at the cost of, at best, a slight increase in case volume by going with 60mm fans.
Top

60mm fans w/ half hight only expansion? feels like were moving back in time now. didnt they already learn these lessons? There are already much better mini itx cases available than this.
Top

More pictures of the case can be found here:

Is that a fanless PSU i can see?

the chinese sites seem to indicate those are dual 80mm fans, not 60mm.


i cant read chinese but you see the word 80mm on some of those chinese sites.
Top


i cant read chinese but you see the word 80mm on some of those chinese sites.

That's also the impression I first got looking at the pictures. In one of those pics it's obvious the two fans have about the same length as the motherboard area, and an mITX mobo is ~170mm in length. 80mm + 80mm = 160mm ......
Top

anyting else come out of the ISK300?

The pic from Akiba looks like 2x 80mm fans. If so...this will be my next ITX case.

Same page says that the included PSU is 65 watt. I would have hoped a bit more.
Top

Can anyone tell from those pictures what the disk capacity is?

I was looking at a Mini-box ITX case, but it only came with 40mm fans - you could do a lot with a 120mm or 140mm fan mounted directly above a motherboard in one of these cases if a designer applied themselves. A 140mm fan at 500 or 800rpm might be enough to work with the correct form factor passive heatsink for C2D/C2Q/i7.

My interest is for an Atom build anyway. 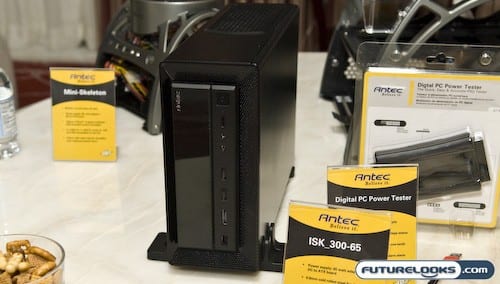 It looks like it has two vents on the side, which suggests dual fans.
Top

I just noticed in the user manual (http://www.antec.com/pdf/manuals/ISK%20 ... ual_EN.pdf) that the external power brick runs at 19V... this is both a good thing and a bad thing, depending on how you look at it (eg you might have a more powerful 12V adapter already laying around), but personally I prefer 19V

It amazes me that people can use things like 120W PicoPSU supplies (I do to) with those pathetic old DC connectors - that's 10 amps at 12V!! Most of those old round DC connectors would get seriously hot at 10 amps (and drop a lot of voltage while they're at it). But at 19 volts, that would fall to ~ 6.4 amps, which is still a lot, but much better than 10

anyway, that's my (one and only?) thought for the day

can't wait to get one of these cases... my local (Australian) supplier told me "the Antec ISK 300-65 ITX case is expected to be available in Australia sometime around the 4th week of June."

BTW, can anyone guess what the black rectangular connector (?) on the back of the case is for? I'm talking about the one at the top, middle. Between the DC power socket, and the '+' panel. It kind of looks like it has two square sockets in it - each about the size of an optical S/PDIF socket (though I doubt that's what it is).

There's no mention of it that I can see in the manual... just curious

My best guess, so far, is: a fuse holder? or maybe part of the internal power supply?

It's the speed switch for the Antec Tri-Speed fans in the case.
Top

bonestonne wrote:you'll find the same type of thing on the P182/3 i'm pretty sure. It's the speed switch for the Antec Tri-Speed fans in the case.

It looks like this case can be bought in Sweden now. At least some sites has it for order.

Anyone with a review of it? How good is the PSU?
Top

The case is available in the US now. I just got the case today.

The ISK 300-65 has space for two 80mm fans, but only 1 is included. The second 80mm fan space is filled with a plastic cover, which is easily removable.

The PSU is 65 Watts, and comes with a 24pin (20+4) and 4-pin CPU power connector, so theoretically it could power a standard Intel or AMD Mini-ITX board, though 65W may not be enough for anything but the most power efficient CPUs.

I'll be testing this with an E7400 and Zotac NF630I-D-E motherboard later today.
Top

the case seems pretty big for what it is. especially given the 65 watt power supply.

Its dimensions are not very competitive with some other cases anyway given it still uses a laptop optical drive .

I have an inwin BM series, and it seems like it fits more in less space (except the inwin doesnt have a solid state psu).

This might be one of antec's duds. their "small" cases seem to not be so great. I.e. the mini p180 for example is almost the same size as other brand full ATX cases.
Top

To me the size of the case is not so important. The bigger the case, the cooler it will be (less noise). At least it is not as big as a normal ATX case.

I haven't found any information about the efficency of the PSU.

My original plan was to get a PicoPSU, but with this case I would save some money if the PSU is doing it's job as good.

So please, review the PSU.
Top

I got the machine built - here are the specs so far:

In BIOS, this PC idled around 46 Watts (measured by a Kill-a-Watt). The machine idles around 30 Watts in Windows. So the PSU seems very efficient.

I ran Orthos for 10 minutes, and the peak load was ~62 Watts (consistently for most of the 10 minute period), with some brief spikes to 65-66 Watts towards the end of each test run. CPU temps (according to Real Temp) idle around 30-31C, and increased to 46C during Orthos.

I ran another Orthos for 20 minutes, and the peak load after ~18 minutes was 68 Watts

and temps increased to 51C.

So this machine/PSU should be OK for normal everyday use, but I am not sure if I want to run Orthos on this machine for too long.

I'm considering swapping the CPU with an E7200 I have on another machine, to reduce the peak power usage. I'll probably give that a try once I have a better CPU heatsink to install.

The machine is not that quiet right now, due to the stock Intel fan. Cooling seems quite good for a case this size. Once I have a better CPU heatsink & some fan controllers on the case fans, I'll have a better idea of how quiet it can get. The case itself is very sturdy and well-built.
Top

slashgyoza wrote:The case is available in the US now. I just got the case today.

You can get it from Antec directly actually:

I got my case from Provantage.
Top

Are you still happy with the case?
I will probably order the case any day soon.
Top

I found it stateside for $60 + shipping.