I'm having difficulties finding reliable information about the best PC case to dampen hard drive noise. Most PC case reviews only test for reduction of fan noise, but hard drive noise is often quite different (in terms of spectrum) and is not using the same decoupling systems as the fans.

I have WD RED 10 TB WD100EFAX drives. Sadly, these produce significant low frequency noise as well as high-frequency seeking noise. I have to mount 6 of these 3.5" drives, and the motherboard is ATX, which puts some additional constraints.

After reading dozens of PC case reviews, I am still quite confused as to which one would be most effective at hard drive noise reduction. Lots of these cases have "sound dampening material" but it's so hilariously thin (around 1 millimeter) that I don't understand how it could possibly be effective. I guess I could just buy thick acoustic foam and add it to the case, assuming there is room for it…

The other problem is that most PC cases have panels that are quite thin, whereas to block low frequency noise I ideally need a case that is as thick and heavy as possible, with very dense, rigid panels. I was unable to find a truly heavy case (relative to its size) that could potentially provide an improvement on that front - they all seem to use the same kind of thin steel panels.

Right now the main options I'm looking at are the Fractal Design Define R6 (a well-known, popular, critically acclaimed reference), the Be Quiet! Silent Base 601 (1 cm thick acoustic foam), and the Nanoxia Deep Silence 6 (extremely heavy, 4 kg doors, though it's very large, hard to find, and reviews are mixed). Does anyone know of any better options?
Top

When dealing with so many drives, the best solution is to move the noise source far away (like a headless NAS in a closet in a different room) and then use SSDs for local OS/storage in the PC itself. No matter what case you choose, 6 HDDs are going to be heard when the PC is a meter away. Hopefully, Abula will post about his recent case experiences, so let me focus on modifications.

The low frequency sounds tend to be induced/resonance based. Decouple the source (soft bushing mounts rather than hard screw mounts) and increase the case panel mass (buy some cheap HEAVY self adhesive vinyl floor tiles and attach to panels). Decouple the case from the floor by putting a dense rubber mat between the two.

Decouple the disks from the case.
Top

Thanks for the advice. I tried everything I could and I managed to make the case significantly quieter, though I can still hear it if I pay attention. 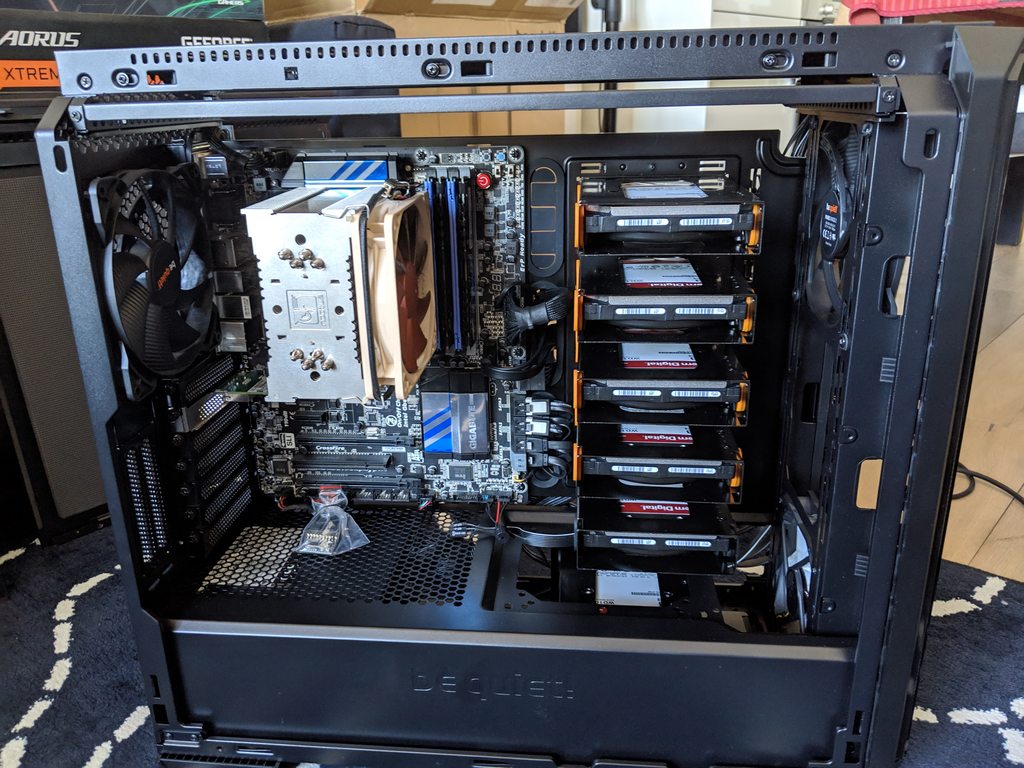 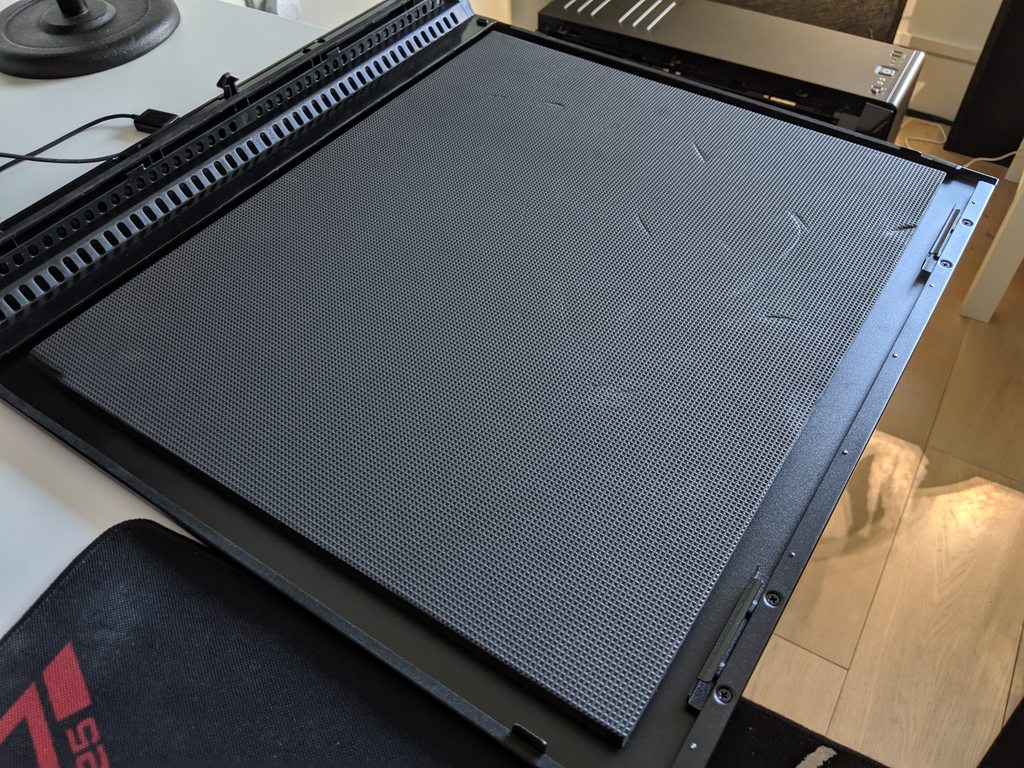 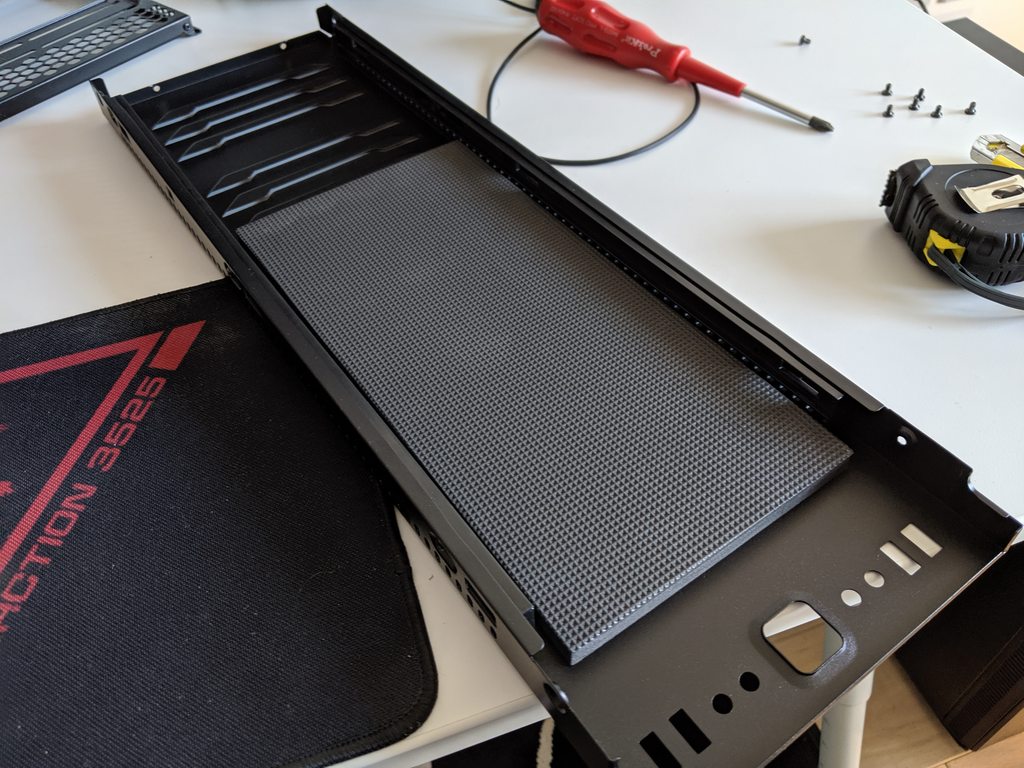 Just changing the case did not improve the situation - in fact, I got the impression it made things worse compared to my previous Define R3. I have my doubts regarding the acoustic material that Be Quiet! uses - it's thick all right (10 mm), but it's not very heavy, and it's not very absorptive, either. I decided to replace this material with a Silent Panel by Advanced Acoustics, which combines weight (Mass Loaded Vinyl) and some amount of acoustic absorption (insofar as the 25 mm thickness allows). I ended up placing this material everywhere I could inside the case, including between the hard drives, stopping short of obstructing airflow inside the case: 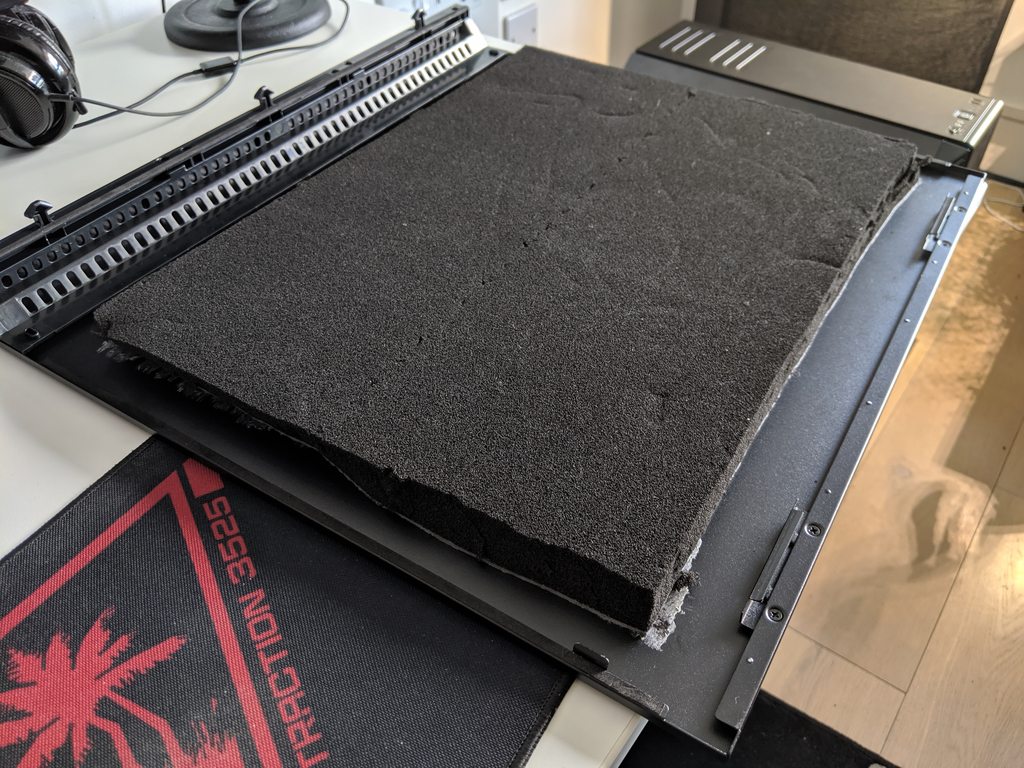 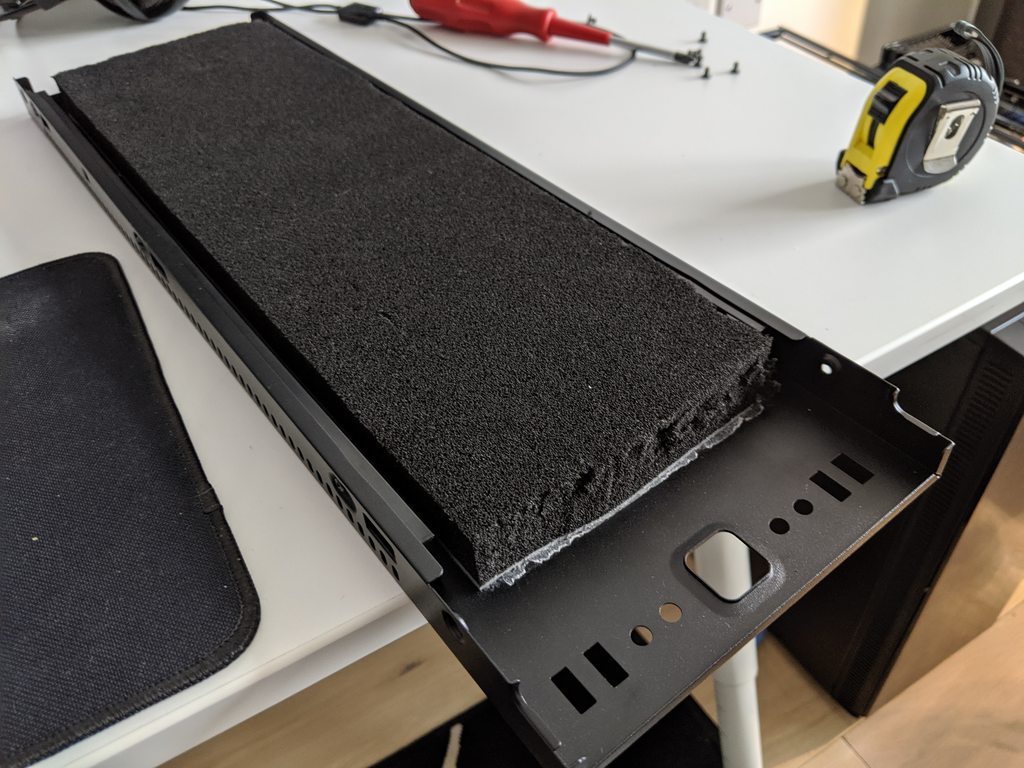 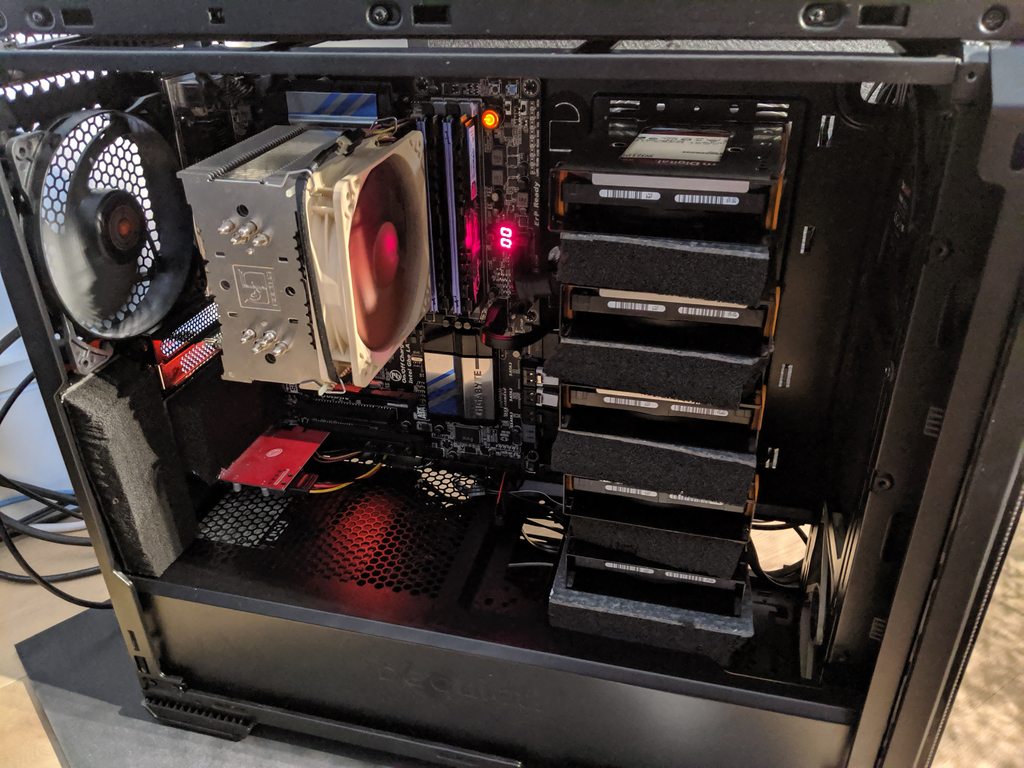 Another thing I did was further decouple the drives from the case by not only using the rubber mounts Be Quiet! provided, but also by decoupling the HDD cages from the case itself. I did not go so far as to suspend the hard drives because I couldn't find an easy way to do it (I considered the zip ties approach but I'm worried they might break and send my hard drives crashing into the case).

I did work on the acoustics outside the case. I put the case on a vibration mat as I noticed low frequency noise was being transmitted to the floor. Also, I was worried about the direct sound being radiated from the hard drives through the rear fan (which of course cannot block noise), so I installed acoustic foam on the wall behind the case to try to absorb it, and it seems quite effective: 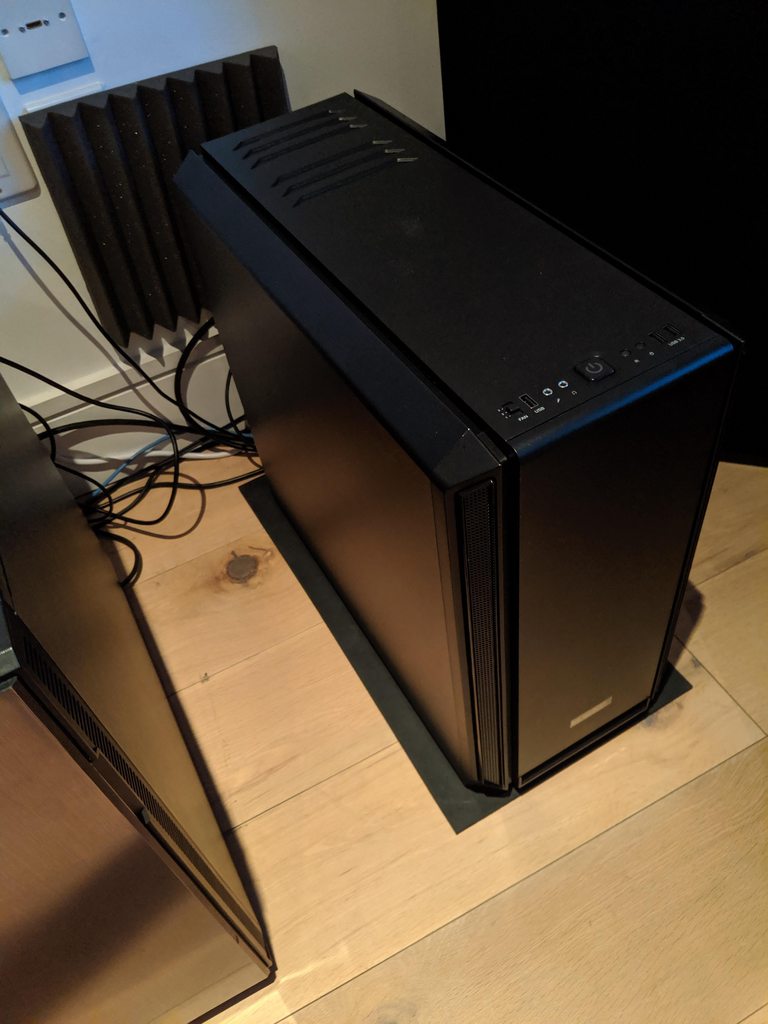 In the end the drives are much quieter now. It's not perfect - I can still hear them if the room is otherwise quiet and I pay attention - but it's definitely a significant improvement. I was pleased to observe that cooling was not impaired significantly - the temperature sensors on the hard drives only report an increase of around 2°C or so.
Top

That's a lot of hard drives! What is the total capacity, and could you also get it quieter, by using fewer, larger capacity drives?

Has the temperatures of the system / drives changed, since your mods?
Sincerely, Neil
http://neilblanchard.blogspot.com/
Top

NeilBlanchard wrote:That's a lot of hard drives! What is the total capacity

That's 6x Western Digital Red 10 TB WD100EFAX hard drives. (The sixth one is hidden behind the PSU shroud.) 60 TB total raw capacity. (They're in RAID 10, so the actual usable capacity is 30 TB.)


NeilBlanchard wrote:and could you also get it quieter, by using fewer, larger capacity drives?

Well, Seagate seems to make a 14 TB drive that (according to the specs) is quieter, but it's hard to find and extremely expensive. Aside from that particular model, and as far as I can tell, all >6 TB drives are noisy. I would recommend anyone who cares about acoustics to stay away from current models of high-capacity HDDs.

I bought these 6 hard drives about a month ago. Before that, I had 6x WD Red 3 TB WD30EFRX drives, which are extremely quiet, the polar opposite of what I have now. If I didn't need the extra capacity, I would definitely have kept using them. The new setup is a massive regression in terms of noise. It's more bearable now with my acoustic modifications, though.


NeilBlanchard wrote:Has the temperatures of the system / drives changed, since your mods?

In my previous case (Fractal Design Define R3 unmodified), the HDD temperature sensors read between 45 and 48 °C, depending on the position of the drive within the case. In the new case (Be Quiet! Silent Base 601), unmodified, the temperature dropped to 35-40 °C. With my acoustic modifications, the temperature range is now 35-45°C. (In all these setups, there is 1 case fan at the rear and 2 at the front.) My understanding is that anything below 50°C is fine for hard drives, and Western Digital states in their spec sheet an operating limit of 65 °C.
Top

Sadly, no (and it would be tedious to remove them now, it would probably wear up the adhesive). It makes sense to me that this is the mod that impacts airflow the most - it's a huge obstruction. If I remember correctly it also made a noticeable difference to the noise level, but honestly it's hard to tell as I don't have the appropriate equipment to measure low noise levels reliably.

Somewhat surprisingly, the mod that I think made the most difference is the acoustic foam on the wall behind the case. I suspect a lot of the noise is coming from the rear fan opening, which obviously can't be foamed off.

Some people elsewhere I suggested I use watercooling so that I can remove all the fans and close the case completely. However, setting up 7 waterblocks (one per HDD, plus the CPU) seems like an extremely complicated affair.
Top

It's a personal server that I use mostly as a NAS. I have a number of use cases for it that I won't go into here. Some of these use cases require a lot of storage.
Top

edechamps wrote:Somewhat surprisingly, the mod that I think made the most difference is the acoustic foam on the wall behind the case. I suspect a lot of the noise is coming from the rear fan opening, which obviously can't be foamed off.

Could be - it's certainly the loudest thing I have going on at idle.


edechamps wrote:Some people elsewhere I suggested I use watercooling so that I can remove all the fans and close the case completely. However, setting up 7 waterblocks (one per HDD, plus the CPU) seems like an extremely complicated affair.

I have a full tower Chieftec case, around 67cm tall, with 8 HDD and 6 ODD bays...white easy to work with, but it's short in width and nightmare from a dust-filtering perspective, in that there are no filters, fan bays are small and not made to push air across the case, which is moreso made to draw in air from various small holes all around...negative pressure king

I'm tired of it kinda, but with a super-rigid metal frame (which makes EVERY case I ever tested, up to 300 eur worth look flimsy), it is made to support the weight and vibrations of HDDs...

Most cases, even really expensive ones, are OK up to 3-4 HDDs...it's only when you hit 6 hdds that you start to filter cases effectively in this regard, and 8+ is just really difficult to make do with...I had up to 10 or 11 HDDs...thankfully no more.

Reviews rarely populate them at all, much less so with 3.5" HDDs, as they should, if the case is to be tested relative to its specifications and possibilities.

...and because the structural parts (and the 5'25" bays) have been removed as well, it's not really possible to use adapters or suspensions to reduce vibrations...

We're in another curve in the case manufacturing business where companies also seem to make cases they don't test, or concerned more to "tick the boxes" than actually provide any functionality, from a pc-building and everyday usage perspective.

The vast majority of people don't use radiators...it's actually a small subset of the power-users who do...so why must almost all new cases come with these ridiculous designs with backplate-mounted hdds and non-structurally compensated HDD bays?

It's not like ssd drives have caught up with HDD drive prices with regard to GB/TB...

Personally I have moved from 3.5" drives to 2.5" HDDs, where prices can be quite similar (even if bought as external drives)
Top
Post Reply
13 posts • Page 1 of 1