Based on GM206 die (GTX960), 90W TDP and meant to slot in between the GTX 750 Ti and GTX 960. Most aftermarket cards are stock overclocked leading to performance in many cases closer to the 960 than the 750 Ti. Needs one PCIe graphics power connector.

Given that the only trust worth noise review are SPCRs, i think its fair to compare between the same site into which card is noisier. For me the GTX950 is a card that is passive under light load, so mostly what its important is how they are under heavy or gaming load.

So the conclusion, at least for me, would be the Asus is slightly more noticeable than the MSI under load, the same that i have found on the GTX970 and GTX980Ti.
Top If i were buying i would probably go MSI first, then Asus then EVGA.
Top

Neoseeker posted an Asus versus MSI roundup without much info about noise & power draw. However, their overclocking results are quite interesting.

Also, what do you folks think about the power results at Techspot?

I'm not too concerned about 1 wild data point, but these results are odd.
Top

Ok, I had a bit of time and started populating the review listings.
Top

Thanks for the effort as always, Steve.
Top

Those MSI load figures are just lovely. It's a shame they won't overclock their cards more with such cooling power on hand, but then again they always position themselves at the low end of the cost curve.
Top

There is a YouTube review of the MSI GTX 950 2GD5 OC, which is a single-fan card that looks really good and has 2 DVI, 1 HDMI and 1 DisplayPort.

[Note: The Gigabyte Windforce is, per the review at TechPowerup, not passive in idle, and is quite noisy according to them.]
Top 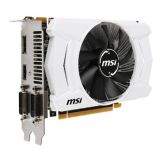 ps. I'm probably getting the 960 version of this card, the two-fan white model.
Top

Your GPU loading sounded high to me, so I fired up WoW with my GTX 760...which should perform worse than your 950. The only way I could get to 100% loading with 1080P Ultra settings (flying around in towns..wasn't in a RAID or anything) was to use SSAA 4x or better in Antialiasing. Anything below that gave me less than 90% loads and > 60fps. MSAA 4x and Ultra provides 75fps and 75% load. Kicking in Vertical Sync drops the loading to 55%.
Top

Thanks for the impressions xen. Sounds like a faithful update to my card; it has way too high minimum RPM and a mediocre acoustic/sound profile. Tolerable at best, but hey - it was 50 EUR less than the competition at the time. Enough to buy a third-party cooler, if I had found one I truly liked.
Top
Post Reply
18 posts • Page 1 of 1