Over the last several weeks, I have been working to make my home system more quiet. (maybe I'll post a summary of what I did in another tread). Then, last week, my grandpa called me and said he needed a computer fast. So I went and bought a Compaq Presario SL1055CL at Costco ($900 on sale including a 17" LCD). To my surprise, this Compaq is nearly silient, and very well designed. Here is my mini review so that others that might want to purchase a complete computer system could consider this as an option.

Here is a view of the front of the system (with plastic protectors still on): 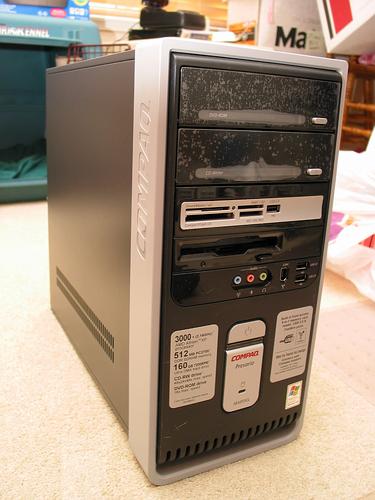 To keep noise down, the system contains only 3 fans. An 80mm in the power supply, an 80mm on the CPU heat sink, and a 92mm exhaust fan. All three are thermally controlled. The power supply does it's own thermal control, and the motherboard controls the CPU and exhaust fans. When you first turn on the computer, the fans spin at full speed and it is very loud, but in less than 1 second, they spin down to nearly silient. 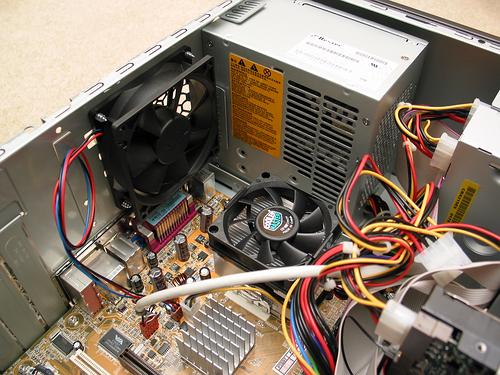 The rear exhaust fan has a nicely unrestrictive cover : 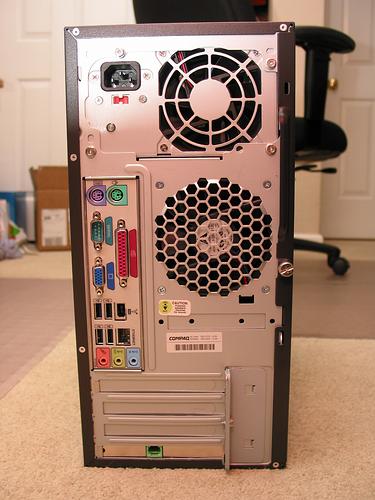 The front intake is quite good for a stock case: 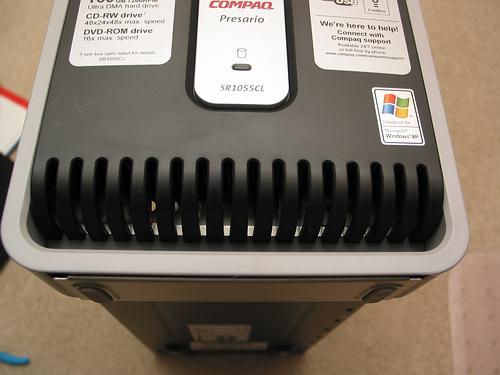 All in all, the system is quieter than my Antec 630 which I have been mod-ing to make quiet over the last few weeks.

The motherboard that it uses is an ASUS A7V8X-LA, which must have Asus Q-Fan, because that seems to be controling the fan speed. There are no adjustments for it in the BIOS, but the default seems to work well. I woudl guess that it's running the CPU and Exhaust fans at 6 or 7 volts at power on and idle, and doesn't seem to increase much over that. I didn't get to do a lot of testing under full load so I don't know how well it ramps up as heat goes up, but my initial impression is that it stays quiet very well.
Top

Hmmm - sounds like the first decent thing Compaq seem to have come up with. I'd usually not touch anything Compaq even came near with a bargepole (Can't write a BIOS to save their lives, these people, for starters...).

I'd be curious about the temps in it - have you got any measurements? I'm assuming that these will follow?

The fans don't increase in speed until the CPU gets to 64 for about 10 seconds (and the only way I could make that happen is with cpuburn). Then, the fans go up to full speed. They go back down to slow the second I click stop on cpuburn - it takes a fraction of a second. Must be monitoring the cpu die core, because no other temperature could change this fast.

Once the CPU temp gets to 64 for 10 seconds, the exhaust goes to 2000 RPM and the CPU goes to 4200 RPM - at this point, the system is very loud. There does not seem to be an intermediate step. Either it is near silient, or very loud.

I tried out speed fan, and it does support controling the fan speeds in fine grain steps, so that would be an option.

But, because the fans don't go up until the CPU temp is at 64, a web serfer, email, word, etc user will probably never hear the fans in high speed.

I thought it was an 80mm, but it turns out it is a 70mm. So, ya, switching to an 80mm would probalby help, but at low spead, even the 70mm that is there is pretty darn quiet.
Top

HP pavillion boxes are very similiar. Not a surprise since they are the same company. I find this design reasonably silent. Not custom-extremely-silent, but acceptable. HD noise is the main source of noise here. Main clonic assemblers may have something to learn form Big Ones like HP.
Top

If this Bios works like a HP Pavilion model, try hitting F11 to enter the "secret" Bios. In here you should have the option to administer the tempcontrol of the fans...
Top
Post Reply
7 posts • Page 1 of 1