by Fire-Flare
I've seen a few that look promising, but which ones have you tried that are quiet/silent when mounted vertical AND horizontal?

by Abula
Not that many 140mm fans in the market, and PWM very few, my recommendation is Noctua NF-A14 PWM, according to noctua marketing on thier box is design for rads.

I bought some for testing, and i want to try on Fractal Design Define R4 and Arc Midi R2, both use 140mm fans, but im not into watercooling, either way that would be my choice if i were going, i manage to test them on Asus mobo with FanXpert2, here is the control on the CPU_FAN on PWM control, 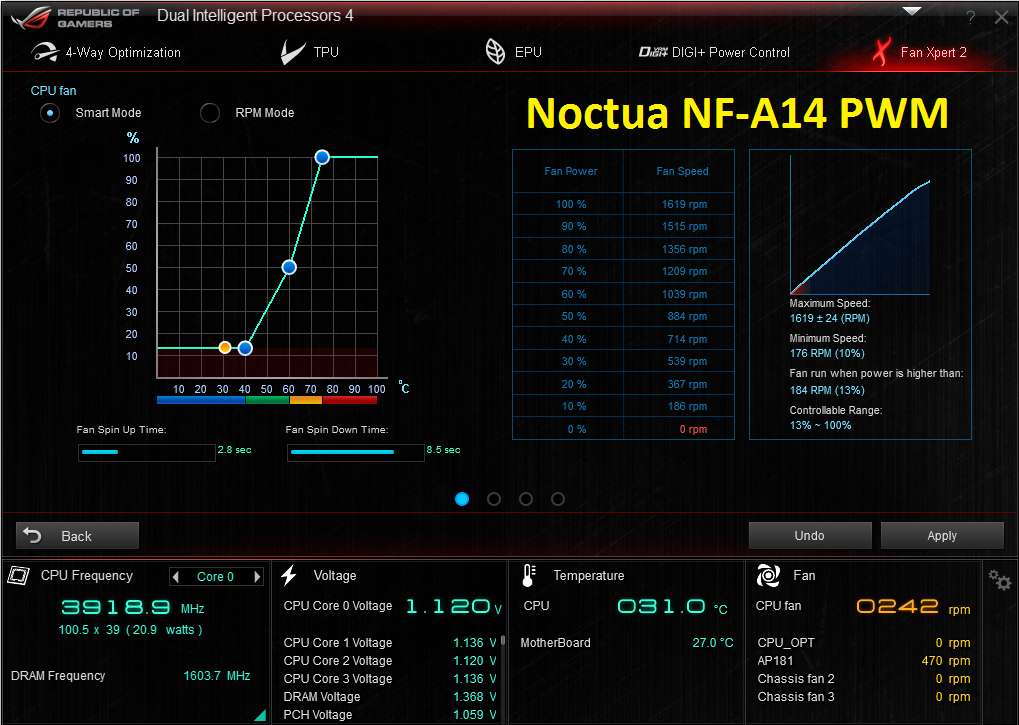 by lodestar
It might be worth considering the Akasa Apache 140mm. Top speed is around 1350 rpm, the spec says the lowest speed is 600 rpm but under PWM control this drops to around 500 rpm. It has a fluid bearing and is fine in either horizontal or vertical fitting. Somewhat cheaper than the NF-A14 from sources such as Sidewinder Computers, FrozenCPU or Performance PCs. It does not include the extras supplied as standard by Noctua. Rather than using PWM Y connectors and extension leads it is easier and cheaper to use a PWM splitter cable such as the Akasa Flexa FP5 costing around $10. This plugs into the CPU PWM header for the PWM control signal only, the power for all the fans on the chain comes from a SATA connection.

by lodestar
The Noctua choice has expanded to include the 1200 and 1500 rpm Redux 140mm NF-P14S square frame models. If something more heavy duty that this is needed the NF-A14 industrialPPC IP52/IP67 PWM models are available in 2000 and 3000 rpm versions (with idle speeds of around 500 and 800 rpm under PWM control).

by Telstar
Those industrial PPC fans are wonderful (and black), but cost 30€/40$ each

I would like to see the redux ones tested, though.

The Corsair AF140 QE are also good, but not the best for rads.

Fire-Flare wrote:I've seen a few that look promising, but which ones have you tried that are quiet/silent when mounted vertical AND horizontal?