I just build a HTPC but found it too loud. Here's my current setup (shown below): 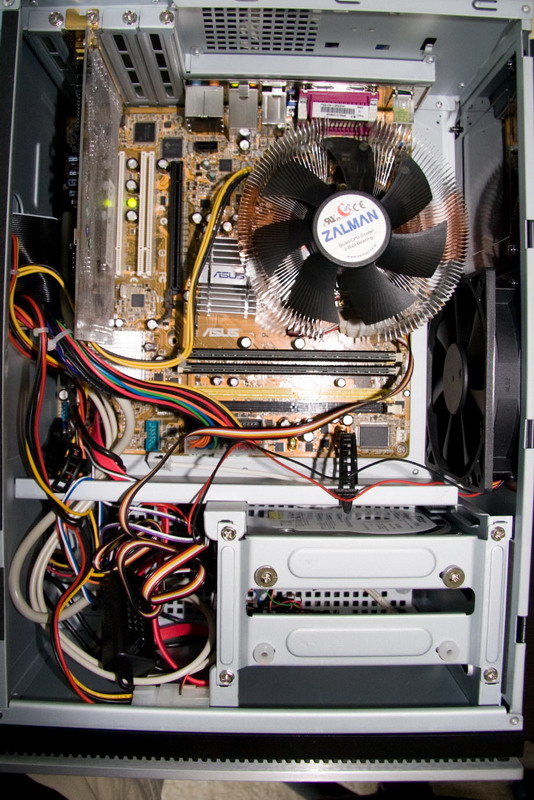 As seen in the picture, I was forced to remove the rear fan since the heatsink is a little too big. I found the zalman fan to be the most annoying, but the tricool fan and hd noise is not far behind. However, my temps are already quite high (CPU idle 40C, prime x 2 - 60C).

Any suggestions to make it quieter without it even hotter? How much quieter/hotter will it be if i replace both fans with nexus?

Also I am considering using a different HS, so that I can use the rear fan which seems to be better positioned than the front. Any comments on that? ( I was hoping to buy a xp-120 when i build this system, but it's out of stock everywhere. anyone know what's going on?)

Thanks a lot!!
Top

Try turning Q-fan on for the Zalman to slow the fan down a bit more. In our reviews we've always found the Zalman 7000 (and 7700) fan to be too loud even at 5V (min setting of fanmate). Qfan + fanmate at min makes the fan spin a touch slower -- enough that you can hear the difference. That annoying humming drops a notch.

I don't think you should worry about the side fan -- using the back position will tend to short circuit the flow from the back panel intake.

This will probably make the CPU run a bit hotter, but those A64s can easily run 70C w/o issues and a burn-in is worse than any real-life scenario for a HTPC. If the chanage makes it quiet enough, great. If not....

A Nexus 120 at 7V will be quieter than the tricool at low, not by a huge margin, but perhaps enough. Any of the slow speed Scythe fans are also worth trying.

It's not difficult to suspend the HDD for a further reduction in hum and seek noise (a bit). Just remove the grommets, and flip the top bracket over to give a little more room for running the clothing elastic between the vent holes on the bottom and the bracket. The silicone grommets are good, but full elastic suspension is audibly better.

You did not mention the PSU -- I presume it's the stock one? Once you make the Zalman HS fan quieter, the PSU fan may become the loudest thing in the machine. We did criticize this too -- it's definitely not as quiet as the fan used in the NeoHE, which is a shame. To fix it, you need a slower fan with similar or better sound quality. Something like a Nexus 80 fan swap is not wise because it won't start till the PSU is quite hot, whiich means the PSU won't have a very long life. (Also it's a sleeve bearing which does not like heat much either.) Similar but not quite as bad problem with a Panaflo 80M (which is unfortunately a bit noisier than the Nexus).

Easiest thing is probably to just swap the PSU out for a Seasonic S12. Any model from 330 to 430 will be fine and be similarly quiet. It's fan should rarely ramp up except maybe in very hot weather and very high extended load.
Top

I know it's not exactly the same situation since I am using a passive CNPS 9500 AM2, but switching the 120mm from an exhaust to an intake dropped my CPU temps by 12c. At the very least, it's a cheap, quick, easy thing you can do to see if it helps.
Top

what would happen if you mounted the harddisc(s) only with the top-screws?

just let them hang. no screws from beneath.

it would mean less contact between the drive(s) and the case.
Top

That's how I have my hard drives set up - screwed in lightly from the top just so they don't fall over, but resting on the grommets.
Top

NARC wrote:That's how I have my hard drives set up - screwed in lightly from the top just so they don't fall over, but resting on the grommets.

does it decrease the hum/noise of the drives?
Top

They're a pair of Samsung Spinpoints, and they run pretty quiet already, and I don't really notice them.

However, that's mainly because the rest of the system is still too loud. I've got a CNPS9500 in there, and I must have bad contact on the Proc, because I've got temps ranging from 59c to 82c and the fan is ramping up and down all the time.

I've got the Tricools on low, and that's not bad for now - but I may change my mind when I get the Zalman all fixed up.

I wonder if it would be possible to just 'sink' 2 HDD-Silencers in that HDD-chamber of the Fusion. That way the seek noise of the drives would be effectively suppressed.
Top
Post Reply
8 posts • Page 1 of 1