Hello, so I bit the bullet so to speak and purchased a new CaseLabs BH4 because of the portable nature, compact size and direct airflow. The primary use is for general software development. Here's the build I'm planning.

The general airflow plan is front to back with 2 front fans and a tower cooler. I don't plan on a fan on the bottom back for now, nor any on the top. No plans to overclock, and I may add a demciflex filter to the front.

2. Are there any other better CPU cooler choices that fit the 143mm height restriction?

3. Suggestions for a linux MATX motherboard? Based on suggestions in other threads for linux fan control from Abula, I'm thinking AsRock, but not sure which model. Perhaps ASRock Q170M vPro?

4. Only 450w PSU should do fine for this build as is but still seems a tad bit low for long run. The SF600, which I might get, has been said to have a bit more aggressive and noisy fan curve. Any other options?


Thanks, and any other suggestions are welcome

Re: A Small Silent Linux Workstation

mikeb wrote:1. Not sure on the front fans. Perhaps the Noctua NF-S12B REDUX? Noctua NF-S12A? Gentle Typhoons? Others?

Here it will depend, Gentle Typhoon PWM fans (darkside) cant drop that low, the lowest i was able to run them was around 630rpms, if this is good enough for you go for it, they are nice fans none the less. Noctua NF-S12B PWM or even NF-S12A PWM are more meant for case fans with not that much restrictions, they drop usually very low under PWM control, worth mentioning that the NF-S12B cant go much lower than 450rpms while the NF-S12A can go around 250rpms. I leave you the 3 graphs of the fans for you see the working range under a PWM header,

Other 120mm fans that are worth considering are Scythe Glidestream and Slipstream PWM, tonally they are very good,

mikeb wrote:2. Are there any other better CPU cooler choices that fit the 143mm height restriction?


Noctua NH-U9S, Seems like a good option with your restrictions of height.

Noctua NH-D9L, similar to the above just with the fan on the middle, might be worth checking reviews into which cooler is more efficient.

Noctua NH-C14S, has a height without a fan of 115mm, depending on the motherboard and placement you might be able to use the fan on the bottom and still mantain the height with a fan that its 140mm. You might even be fine with the fan on top, looking at the case it has some openings on top (although not sure since caselabs everything is configurable) but with the fan on top its height 142mm thus matching your 143mm restriction, but you do need at least 10mm for it to breath but if the openings do match this might the biggest cooler you could fit, again depends a lot on the socket placement and the case itself.


mikeb wrote:3. Suggestions for a linux MATX motherboard? Based on suggestions in other threads for linux fan control from Abula, I'm thinking AsRock, but not sure which model. Perhaps ASRock Q170M vPro?

Depends on which features you like, i had very good results with my H170 Pro4, there is a version in micro ATX, ASRock H170M Pro4, the good thing about this mobo is that has all the possible video outputs, so you are set with whatever monitor you own or might upgrade on the future, thats with the intel igpu, but might not be worth it since you are considering a dedicated GPU, look for whatever features you like and go for it, specially look on linux forums for support for things like audio and lan.

Remember on AsRock you usually get, at least this how mine works, CPU_FAN and CHA_FAN1 are autodetect, they can both control 3pin voltage control or 4pin PWM fans, CHA_FAN2 is only PWM (cant control DC fans). Enter the bios and change all of the to be controlled by the CPU and not the chipset/mobo temp, thats how mine are setup. Depending on the fans you chose you can detail each graph to your own liking, as long as the fans can reach it (see the graphs above to see the limitations of each). 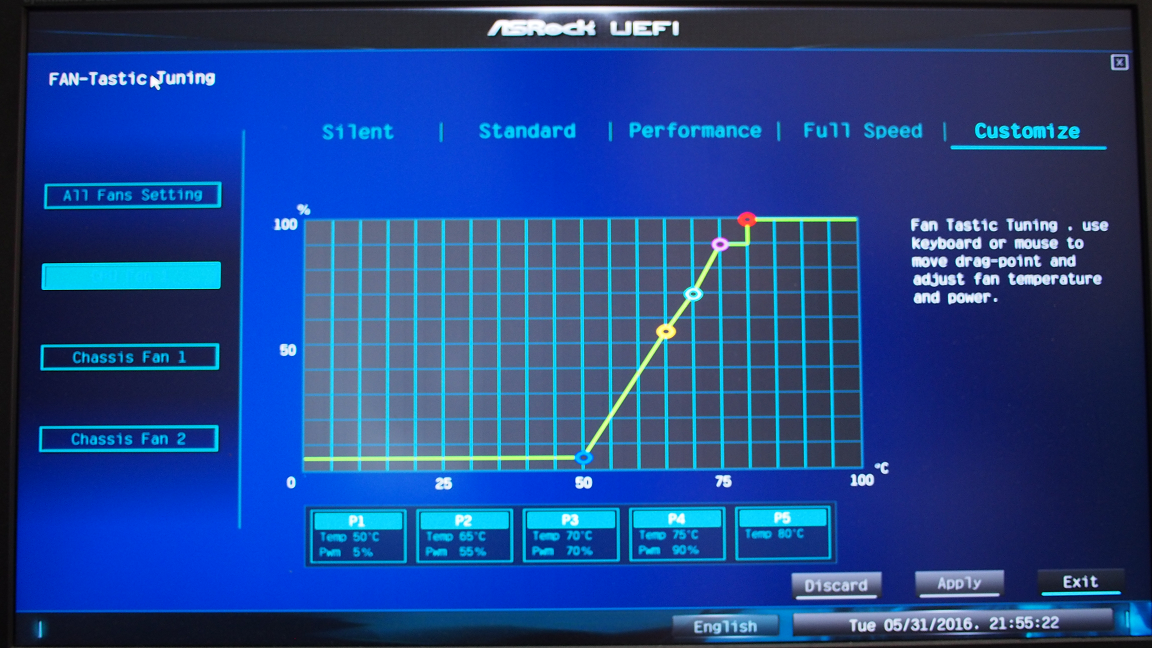 mikeb wrote:4. Only 450w PSU should do fine for this build as is but still seems a tad bit low for long run. The SF600, which I might get, has been said to have a bit more aggressive and noisy fan curve. Any other options?


mikeb wrote:any other suggestions are welcome

One thing that might be worth it is to contact DemiCi filters to see if they can do you some custom filters for the case, at least for the top and front, else you going to get a lot of dust inside.
Top

Re: A Small Silent Linux Workstation

Thanks Abula! Sorry for the long time between posting, I've been tied up with work and doing some research on the options.

I've gone ahead and ordered the Scythe SlipStream fans, they look like an excellent and affordable option. For the motherboard I'm going with the ASRock Z170M Extreme4 MATX over the H170 because it's got a USB C connector and better audio. Rather than the Noctua coolers I've gone with a Cryorig M9i which was one third the cost of the Noctua, cools nearly as good in reviews, and will likely upgrade the fan. All purchases made with the SPCR affiliate links of course

Definitely going to put the filters on as you've suggested as well once I get it running.
Top

The Demci good filter, but you also can use the polyurethane foam or the fibred unwoven material for your case.
Last edited by Ali2 on Mon Sep 26, 2016 3:25 am, edited 1 time in total.
Top

Um, what? Let me put my boots on. Sounds like marketing bull to me.
Top

Um, what? Let me put my boots on. Sounds like marketing bull to me.

Or some form of spam/viral marketing (first time poster, who changes the thread subject in order to point out the new brand...).
Top
Post Reply
6 posts • Page 1 of 1