Not a real review but just my impressions and testing of the Phanteks 140mm Case/Radiator Cooling Fan (PH-F140XP_BK).

Im trying to test some 140s, specially PWM fans, and i had big hopes on the phantek with SPCR having reviewed so favorable the 3pin versions, and with the phantek marketing of a 300-900rpms fan (with Q.S.A aka ULN), then i though why not... let see how it does.

Description:
Really appealing fan, the black n white looks very good, specially on the Define R4 with the matching theme, the fan seems very well constructed, very solid although the shape is not completly standard, it fits were a normal 140 should. Has built in rubber corners that should help some with vibrations, although im my experience the fan is well balanced, didnt see anything like Fractals stock fans. The fan seem very similar in lot of ways to Noctuas, the accesories are almost the same, comes with an 4pin extension, a Q.S.A. that its like Noctuas ULN adapter, the sleeving on the fans and accesories is the same, maybe its done by same manufacturer facility... with the twin tower from them being so similar kinda think they share a lot of things.

Operation:
The fan kinda matches what Phantek advertises for the stock settings, i leave you a fanXpert2 run on Asus Maximus VI gene where you can see the fan curve on a true PWM fan header (CPU_FAN). Where the specs are not accurate is where Phantek advertises Q.S.A. drops the fan to 300-900, i was a little skeptical at first thinking that noctua ULN reduce the more rpms is at, berealy anything at the begging of the curve... so i though maybe phantek is different, but no same as noctuas, the top end matches what phantek advertises but the low end remains very similar, like noctuas. I also tested on 4pin CHA_FAN (Fake PWM, voltage controlled).

I also tested on the PWM on my MSI Z87-GD65, on pure bios, on all the different % the motherboard allows, and matches well what found with the Asus tests, but posting this in case someone will build on MSI they can plan their build with the exact numbers it should give them, 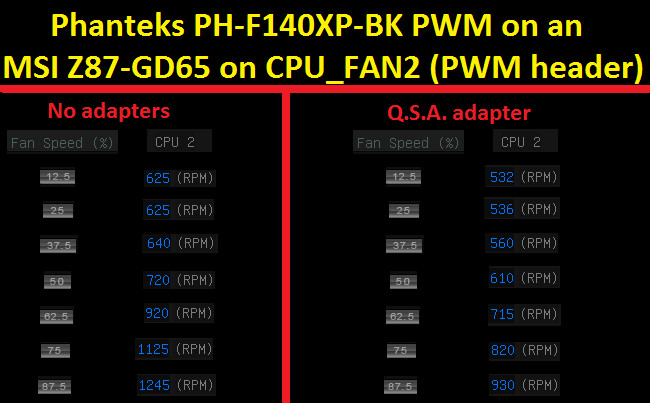 Tonal Quality:
This is totally subjective so take my comments with a grain of salt, i feel the fan is a little quieter under the same RPMs than Noctuas NF-A14 PWM, i coulndt hear much noise from the bearing, but i did hear some ticking on the minium rpms, this is very close, inside a case it i couldn't perceive it.

Conclusion,
Is one very nice fan, although it doesn't have the range of operation of the NF-A14 PWM, it might be very appealing to people that dont like the colors of Noctua, and can live with the minium rpms. When i bought it was $15.49 free shipping this almost 40% less than noctuas, so its a nice option, specially for people that are looking for PWM and good looks.

Thanks for the review.