I'm considering the upcoming Silverstone FT05 for a future build, considering how good regarded the FT02 and TJ08-E have been for community, i already own an AP181 which is the same fan that will come with the FT05 (sadly silverstone recently decided to drop the AP182 due to cost), so while the AP181 are incredible good fans in terms of cooling, the least i can take them down undervolting is about 470rpms, where they are quiet, but still audible on a very quiet night, a very light wosh. So knowing that i will not get the AP182 on FT05, decided to get one to see if they were much different or if they could be drop lower. 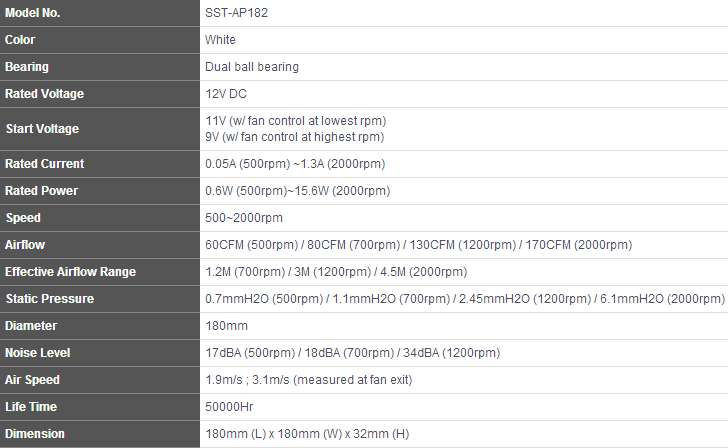 The construction is the same as the AP181, the color is white, and its uses a real ball bearing instead of the standard sleeve bearing, it consumes up to 1.3A so check what you will be using to power up, most motherboard manufactures rate their headers for 1A, with that said i did fully use it for hours and stressing it on my Asus Maximus VI Gene and i had no issues. 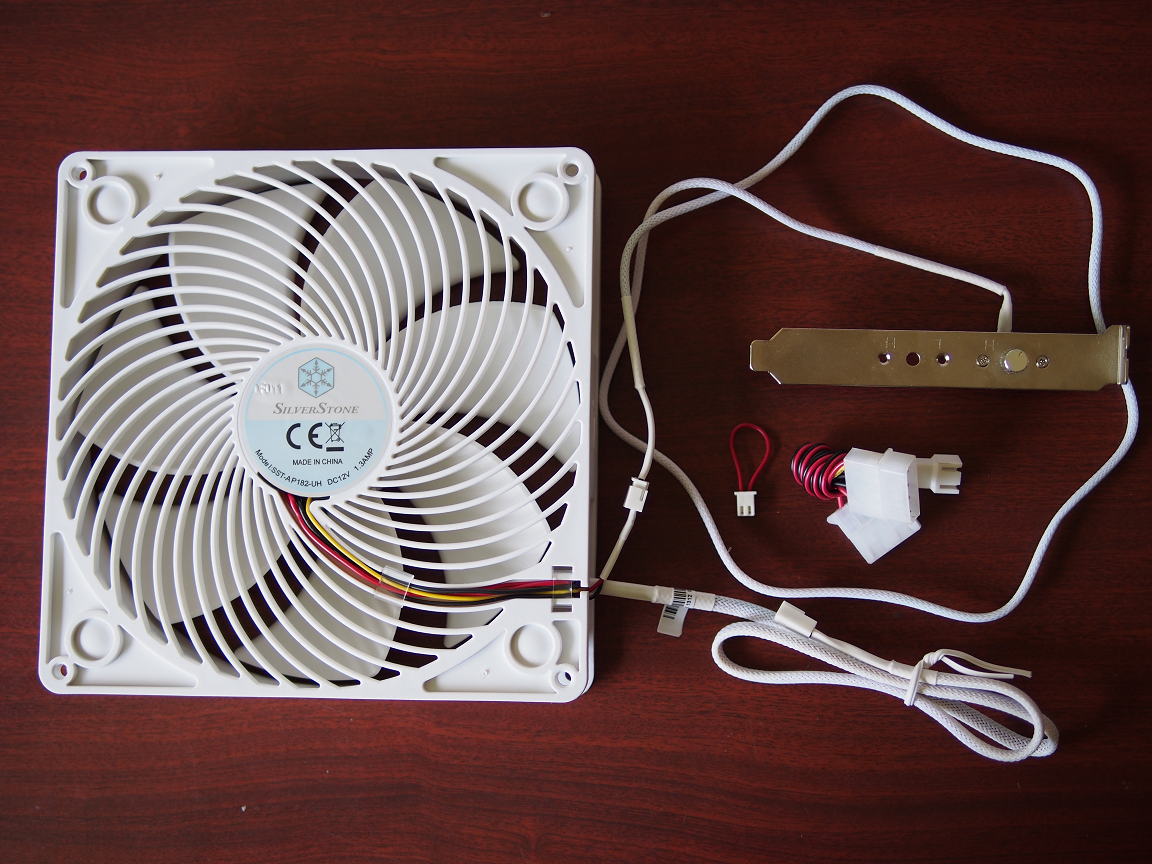 The fan is by far the best fan i have ever used in terms of amount of air moved, its really astonishing what this beast moves at 2k rpms, specially with the design of the focus airflow, you can really feel the air pushing, but as with most fans taken to this levels its really loud, i don't have something to meassure the dbs, but it was noticeable at least 10mts away. The fan at this high rpms its also unsafe to leave it not attached, its so much power it moves itself. In this state I will never recommend this fan to anyone here if they are perusing quiet, but its not all bad.

The fan comes with many accessories, a PCI slot fan controller (knob type), a loop and a cheap 4pin molex to 3pin fan connector. The fan cable sleeving is pretty nice, even the thermal plastic is white, top work on silverstone part on the detail. The fan controller and loop do change the behavior of the fan, but not as i expected, powered by PSU it works pretty much the same as you will expect from a external fan controller, you move the knob the rpms lowers or goes up depending on how you are moving it, so i though it was a plain undervolting by Silverstone, but its not like that in reality, it really changes the range of operation, its like limiting the max mins it operates, ill show it later on here.

I was disappointed on my first run on the fan on my FanXpert2 motherboard (no attachments on the fan), i heard comments on forums that people were not able to take it down to the rated 500rpms minimum, and they are right with a standard external fan controller or even with FanXpert2, the fan with no attachments cant drop below 1388rpms, here is a run on fanXpert2 to show you what i mean, 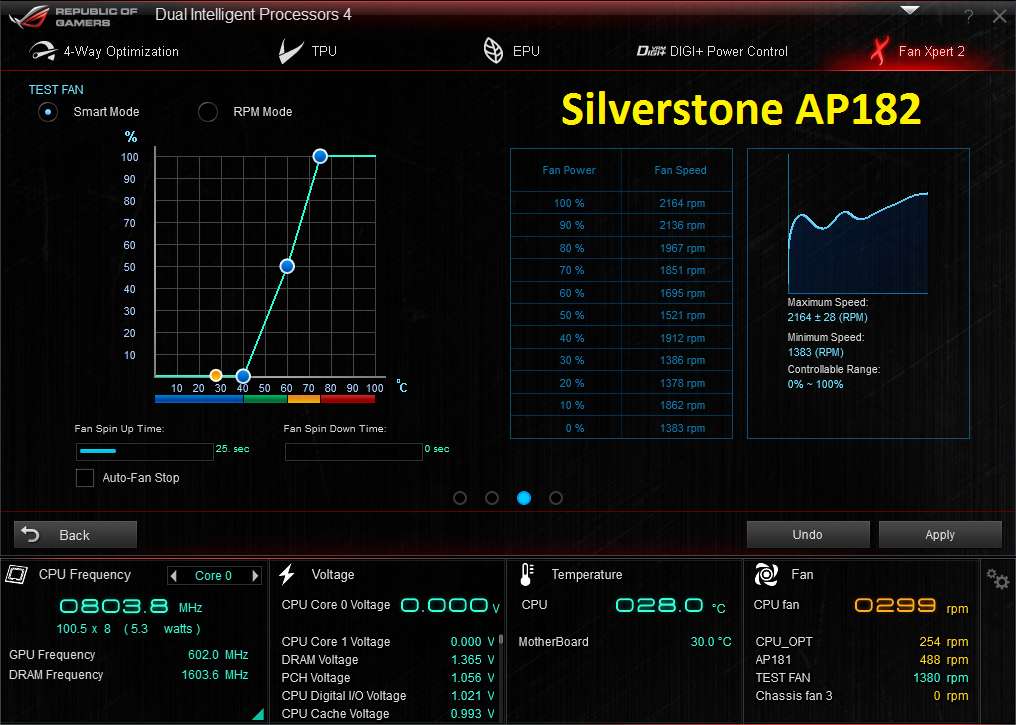 At this state the fan is useless for quiet computing, i though i have wasted $30.... but as i said earlier the fan controller is not a the standard undervolting, it doesn't enter the line in, it has its own connector that goes straight to the motor (it has dual triple cable cables in going in the motor), i first though it was a fancy way of hiding the connector and doing the connection inside, but to what i have tested the provided knob fan controller don't change the voltage but it does something more complex into changing its range of operation, take my comments with a grain of salt as i didn't dissemble the fan and went inside where the connections are, im just basing my comments out of the results i had doing multiple runs on FanXpert2 with different settings on the fan controller. So i leave you with 8 different runs i did on the Asus Maximus IV Gene with FanXpert2 ran on the CHA_FAN2 (TEST FAN), you might find interesting what happened, 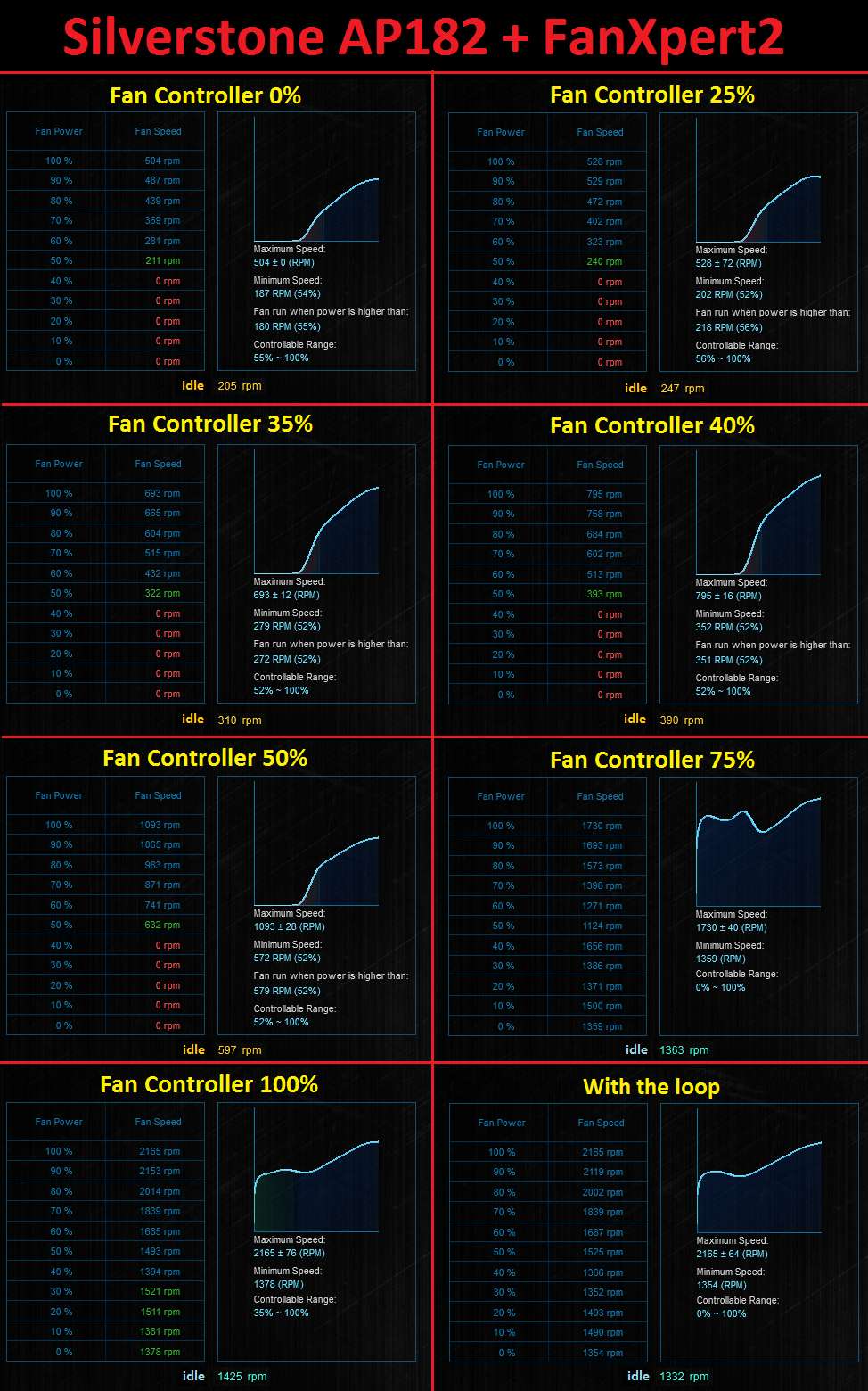 Comments about the the above process,

- The fan at higher than 50% on the fan controller on FanXpert2 will not reliable set the minimum voltage to move the fan, changing the graph slightly and restarting the pc will make the fan spin fine, its more like fanXpert2 cant stablish the minimum voltage and sets it below what it needs to be, but not by much. Also when the fan doesn't spin in this state it produce a very annoying motor stall noise.

- The fan has some ticking, but not all rpms, i couldn't establish which but happens sometimes when FanXpert2 is doing the testing and ramps it up and down, doesn't happen in either of the lowest settings, like idling below 500rpms.

- The loop also changes the behavior slightly, its just a cable to that connects if you are not using the fan controller, you can compare the last run on the the above pic with the first run on the picture above.

- The ball bearing has a little more noise than the sleeve bearing on AP181, but to me was nothing mayor, i would prefer this type of bearing on the future FT05 as the fans will be horizontal.

Conclusion,
The fan is probably one of the best cooling fans in the market, it moves tons of air at the expense of creating a lot of noise, below 700rpms is decent but still its noticeable, at 500rpms becomes a quiet fan (on quiet environment i barely hear it), and below 500rpms becomes inaudible (at least on my home, not a fancy test lab by any means). The fan should never be used without the fan controller attached, as its part of how its design and gives the user a lot of flexibility. My recommendations is to use the control knob at the most at half where its still loud at full rpms, but here you can still undervolt fine, settings like 35% or 40% are imo best suited for someone planning an Asus FanXpert build.

Re: Taming the beast, Silverstone AP182

Upon further testing, i really never try out much MSI SYS_FAN headers as they have higher restrictions on bios (50% to 100%), but today upon liking the AP182 decided to give a shot to see how it would work out moving with the same motherboard to the FT05, and the results are very good, but mostly applies to this fan, i also tested Antec True Quiet 140 and the bios high limitations don't help as much as FanXpert2 can, but in the AP182 particularly because of the special fan controller it worked out pretty good.

With the fan controller knob on the low settings (0%), this are the RPMS you get with each voltage %. 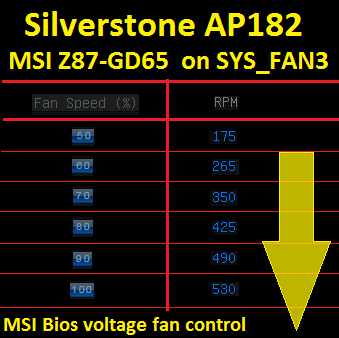 I did a Prime95 run to see if the bios would ramp the fan on the SYS_FAN3 (the fan is outside no impact on temps its just a test), and yes, the fan is manage dynamically according to the CPU temperature, i leave you a HWmonitor of min max that happen during the prime95 run for an hour. 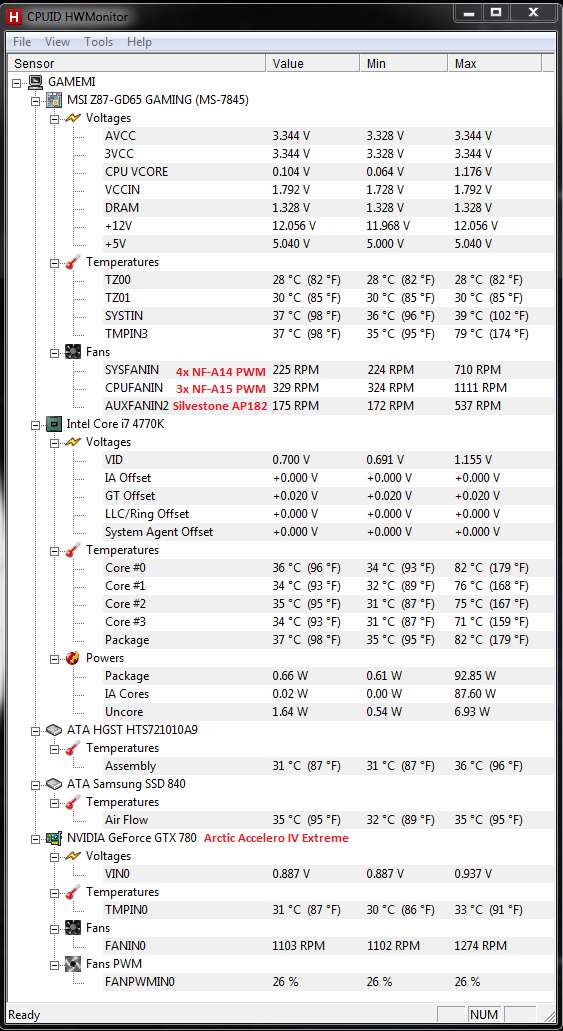 Sadly I cant use the 50% setting, as upon a cold boot the fan wont start, no matter where the knob is (low or high), its like there is not enough voltage to start the fan, but upon entering the bios or rebooting the PC while the AP182 is spinning there are no issues at all running at 50% / 175rpms in idle, but this is not functional as my PC gets started all days and multiple times from cold boot, so i tried 60% and it work always, did 5 cold boots even letting the pc rest for an hour and no issues ever, it does start slow but always starts then ramps up to the 265rpms. The 50% not starting is related directly to the AP182, i tried a couple of Scythe Gentle Typhoons and Antec True Quiet 140, and all of them started fine at 50% on bios, but the AP182 does need a little more voltage to start.

You can increase the range of rpms with the knob, for example around 35% you get 400rpms at 60% and 700rpms at 100%, so give or take the board can manage around 300rpms bump upon CPU temperature, this is fine by me, no need to go any higher or you should accept more noise.