I have just ordered an Intel 2500K (3.3 GHz) an wonder whether the new CPUs still have stuck temperature diodes like the last generation.
My current CPU is a Q9550 (2.8 Ghz) which has one core that does not decrease lower than 40°C.
I know that lower temperatures are inaccurate and unimportant anyway, but I still like to know.

I use Aida64. Do you monitor your temperatures as well?
The values for my current system (using a basic CPU cooler) are:

I'm sure a monster CPU cooler would decrease the temperatures significant.
Top

It's not always easy to believe what temps are being reported, and even if they are for the sensor that it says it is for.

My current CPU temp is 15C, I am not in a fridge so I can happily say that the temp being reported is wrong, however it does rise and fall pretty accurately with the "real" CPU temp, so it must be a CPU temp of some kind but is not calibrated correctly.

2 other temp sensors that are very similar to each other and rise and fall roughly inline are at 26C and 27C, I take these to be the CPU temp sensors (not sure if my CPU has a sensor for each core, it doesn't look like it as I have 4 cores, but only 2 sensors), either way I wouldn't be concerned at all if I were you unless any of them are getting quite hot.

As a general rule there wont be a great deal of difference between the temperature of a core running at 100% and one running at 0% in a shutdown state as the heat-spreader and the silicon itself does a decent job of moving the heat around, I imagine a 10C temp difference between cores running at 100% at others at 0% to be a fair guesstimate, at which point to long as you are at least 10C below the throttling threshold with all cores maxxed-out - for those that show a temperature you should be just fine. Don't loose any sleep over it especially like me if your N/B is the second hottest component after your graphics card and is sat at 34C with my GPU at 41C and they both get hotter, my CPU tops out at about 60C I think.


I'm sure a monster CPU cooler would decrease the temperatures significant.

Yes, and will make it easier to keep quiet as well. My CPU fan is idling at 325rpm....... that's 20% via speedfan, it is an Arctic Cooling F120 on a Xigmatek S1283 with the fan sucking some air through the NB heatsink via a cardboard duct and blowing it upwards towards another F12 running at 5v in the top of my "SPCR Edition" P180 - very cool, very quiet.

Hi andy, thanks very much for your reply.

I like monitoring my system but if I had such unrealistic values like you, hm .. that's not nice.
There doesn't seem to be anything one can do, to re-calibrate I guess. Would have thought to get accurate readings from an external thermometer and enter the values into BIOS.
Computers still don't seem to be that smart, hm.

Regarding cores affecting each other, well ... Aida64 shows the values for each core of my Q9550 here:

... but I think one single value (Utilization & Temperature) in average for all four of them should be fine.

By the way, I have ordered the Mini iTX board Intel DH67CF B3 which apparently does a good job in staying cool .. ► 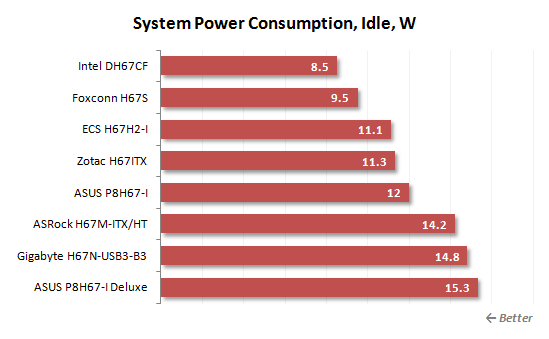 • Extensive option for configuring and adjusting rotation speed of the two 4-pin fans:
-» Specify parameters describing the dependence of fan rotation speed on the teperature
-» Determin which temperature should affect the fan rotation speed
• Four (!) thermal diodes » CPU, RAM, CPU voltage regulator and chipset
• Allows under- and overclocking the Intel HD Graphics core but not (!) the processor core voltage


I just don't understand why Intel does not support undervolting.
It's not like the H67 chipset can't do it because the Gigabyte GA-H67N can do it.
It allows the CPU Vcore to be changed between 0.750V and 1.795V in 0.005V increments.
Was thinking for a few weeks between these two boards but cause many seem to have had serious issue with the VGA driver, I've gone back to Intel.
Some of the Intel boards however, have problems with dual monitor configuration. If that happens to me, I'm gonne give the Gigabyte a chance.

It was clear for me that I won't use a descrete graphics card, so I do like the idea of the GPU being part of the CPU.
What I still don't feel confident about is the decision between i3 2100 and i5 2500K. At the end I have gone with the Demon, but hm ...
Top
Post Reply
3 posts • Page 1 of 1