Has anybody had any experience with these drives? I've been hearing mixed signals. Most sources suggest that they're very quiet, a few disagree.

Alternately, is there anything in the same size (12TB+) and price (<3c/GB) class that would be quieter?

I've currently got Seagate 8TB Archive (SMR) drives, and am looking for something larger.
Top

How noisy is the Seagate?
Top

It depends on what I'm using them for. Currently, the only one I have installed is used for storing TV season packs, which I generally only write to very occasionally, and read off a full season occasionally onto a 'temp' drive (so that I can delete the temporary copies as I go, to keep track of where I'm up to). When I was using one for videos I was saving and deleting quite a bit more frequently, it was quite a bit more noisy.
Top

I recently got the the WD 10tb Elements external hard drive and according to CrystalDiskinfo it's a WD101EDAZ
which from research is a white label air version of the WD101EFAX.

This drive is pretty noisey at idle in it's rubber mounted plastic cash, quite audible from 1 m away. Like a faint drill sound.
And according to the specs below - 36db idle and 38db seek, that's why

It's also the loudest of these drives.
Now Amazon has the 14tb version on a very good price right now, so I'm going to return this 10TB Elements and grab the 14tb version.
Likely a white label helium version of the WD140EFFX
If it truly has a 20dd idle and 29 seek, that's a big improvement!

I know the 21-23db idle rated Western digital drives, suspended mounted in my system are near inaudible from 1m away in my system

If it's that quiet, I will likely have it plugged in all the time.
Maybe even remove it from it's case and have it mounted internally.
The 29db seek will be a few db louder than my current inaudible drives, but since it will be only used to make incremental Macrium Relfect image backups of my partitions it will be idle most of the time.

This drive is way quieter than the 10TB model I returned back to Amazon.
Based the on the Red Plus drives they are made from, I can see why - same noise specs - 20db vs 34db idle! 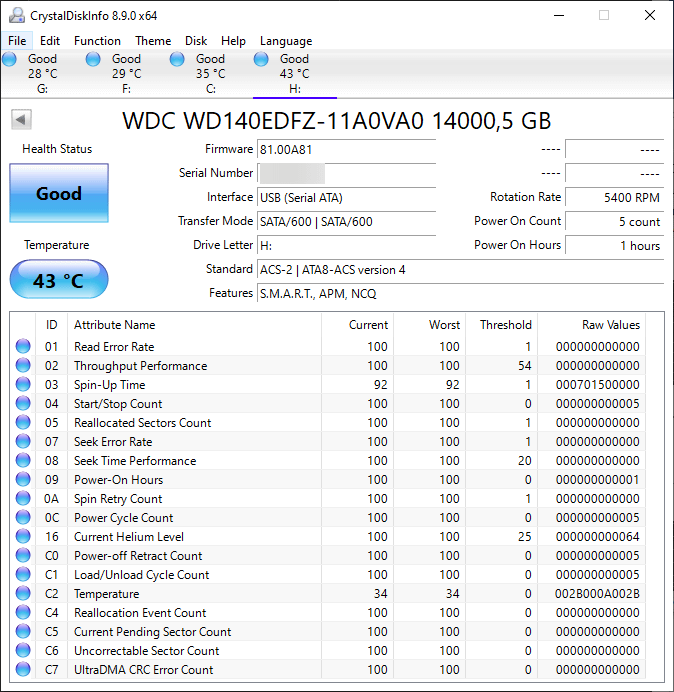 Pretty fast at 210+ MB/Sec read/write over USB3.
Backing up some Macrium Reflect images to it, was the same speed as to an SSD, as it's capped by by Ryzen 3800x's compression speed of 210+ MB/sec

So it feels much faster than than my other HDs

The drive is really quiet at idle in it's plastic air vented case, as you would expect with a 20db idle rating, pretty much inaudible from 1M away.
I can feel a periodic thump on the case every 6 secs, which you will hear if not suspended mounted when inside a PC.

Even while seeking and writing it is quiet as well, despite the 29db seek rating. But there seems to be an occasional dull hollow resonant rattle seek sound, once in a while, that seems to be the drive interacting with the plastic case, which should not be an issue when suspended.

Ejecting the drive in Windows 10, causes the drive to go in standby, handy. Saves unplugging the USB3 cable.
I'm pretty happy with it sitting outside, for backup purposes, so will not be removing it from the case to mount internally.
But due to it's speed, I am tempted to use it as a main storage drive...

It's finally time for me to upgrade a couple of drives in my NAS. I've hung on with 6TBs as long as I can. I'm thinking of shucking either 12TBs or 14TBs, not sure which would be better acoustically? Certainly the report of the 14TB above is encouraging.

My 4 bay Synology is modded with Noctua fans and velcro strips on the bay runners. I think I also put some on the trays but can't remember whether it was on the inside or out. Anyway, I can't do much more to negate vibrations.
Top

IdontexistM8 wrote: ↑
Mon Mar 22, 2021 4:28 am
My 4 bay Synology is modded with Noctua fans and velcro strips on the bay runners. I think I also put some on the trays but can't remember whether it was on the inside or out. Anyway, I can't do much more to negate vibrations.

Are there any resources out there on modding NASs for lower noise?
Top

There are fan mod videos on there too. As long as you get the voltage correct you can't really go wrong with that.

Putting an XL mouse mat under it will likely help if on a table/desk.

Sure those of a more DIY nature have other suggestions.
Top

The velcro trick is nice. Decoupling the base from your desk with a 1/2" mat of rubber or similar can help. The ultimate is stick the drive somewhere else - like a closet.
Top
Post Reply
9 posts • Page 1 of 1