by arf80
Has anyone tested this new revision of the 5000KS as far as noise is concerned? The hard drive review section of SPR hasn't been updated since last June, and a new drive is the only thing standing in the way of a completely silent computer for me. I'm looking to buy either one of these drives in the coming week.
by jhhoffma
Run a search on WD5000AAKS, there has been some discussion on it.
by arf80
Not really. But I bought the 5000AAKS anyway, so I guess I'll report back in a week.
by UrbanVoyeur
I don't have any test equipment, but I do have a 5 KS's and 2 AAKS. All are at 128 AAM in rubber grommet mounting.

Subjectively:
The AAKS are only very slightly quieter than the KS's. They do have noticeably less vibration. Seek noise is the same on both. Spin up/ Spin down is quieter on the AAKS.
by EsaT

UrbanVoyeur wrote:Subjectively:
The AAKS are only very slightly quieter than the KS's. They do have noticeably less vibration. Seek noise is the same on both. Spin up/ Spin down is quieter on the AAKS.

That would be logical considering fewer platters means less spinning mass.
by arf80
Well, after reinstalling with the new drive, it's really not that quiet at all. Maybe I was expecting complete silence after reading the reviews, but motor noise is easily audible at a meter or two away as kind of a white noise "presence". All the effort of installing silent fans and larger heatsinks it seems somewhat pointless when hard drives generate so much noise. The capacity is nice and the transfer speed is noticeably faster than my old drives, though.
by UrbanVoyeur

arf80 wrote:Well, after reinstalling with the new drive, it's really not that quiet at all. Maybe I was expecting complete silence after reading the reviews, but motor noise is easily audible at a meter or two away as kind of a white noise "presence".

Yes, but this only seems to affect the sharp seek noises, and I'm talking about motor noise. I have no problem with a little seek noise when I'm doing heavy drive access, but the constant hum is what gets to me. The drive also seems to have no problem with vibration (standard rubber mounts in p180 lower cage), which is odd considering so many people mentioned it.
by puscifer
One thing i noticed with my 2 reasonably loud maxtors on the P180 is that they sound quieter in the upper cage, the lower one gives out more vibration. It's a shame to hear these AAKS still make some idle noise.. hdds are really the noisiest component we can find in a silent system and we cant do anything about it, unlike gfx cards.
I really dont know what to get, either 6xAAKS 160GB on raid5, or 2xAAKS or even 2xYS 500GB. The YS has 5 year warranty which really wins me over. I really wanna see a review on the 5000AAKS and how they compare to the 5000YS, noise and heat wise. A 2 disk setup could be on a matrix raid although i guess the virtual raid1-raid0 is kinda pointless, if one of the drives dies, wont i have to rebuild the raid and loose all data in the process? And isnt it more prone to raid corruption? Plus i still havent decided which built-in raid is the best/safest for a raid5, matrix or mediashield...
A 5 year raid version of the 166 platter is gonna take forever to make, i bet.. just hope it gets here by the end of the year and it really improves on the YS series. I will probably just end up gettin 3 or 4 5000YS and be done with it.
by SebRad
Hi, I have a 5000AAKS and like arf80 was somewhat under-whelmed by the idle noise. I didn't feel it to be much, if any, better than the 300GB DiamondMax 10 I had before, a bit faster and significantly quieter seeks. I now have it in a Scythe Quiet Drive which is very good. The idle noise is cut down a lot and seeks are barely audible which considering the lack of idle noise is impressive if a little disconcerting as I like to hear drive seek noise so i know when the PC is working and i should wait for it!
The temps are mid 30Cs as the drive sits in the case air intake, when not (case side off) the temps creep up in to the low 40Cs.
Seb
by UrbanVoyeur
The 500 AAKS's I have do have a lower idle noise (subjectively) than the older 500 KS's . Not by much, but it is noticeable. I wish there was a way to slow the drive down, say to 6000 or 6500 to possibly get a quieter idle.

One thing I do is let the drives spin down relatively quickly (15-20 mins).

But overall, these are not silent drives. You know when they are running. These drives are the only thing I can hear in my system.
by NoizEnvader
They're not silent, no, but they're pretty darn quiet.

Besides, is there such a thing as a silent 500GB HDD?
by puscifer
Even the 160GB AAKS probably wont beat it, cuz you'll have to get 6 instead of 2 500GB ones.. Although i'd really like to know how their performance compares. Now i know im sayin it twice, but i really cant wait for a YS series with 166 platters..
by rseiler
Has anyone seen benchmarks for the 5000AAKS drive? I've been reading around comparing it with the HD501LJ, and while I have the noise angle covered, it's a mystery as to which is faster. The best information I have is on Tom's Hardware, which has numerous tables showing the HD501LJ trouncing the 5000KS in several important categories, but since the 5000AAKS has a different platter arrangement and the like, I'm wondering if it closed the gap.
by EsaT

rseiler wrote:The best information I have is on Tom's Hardware, which has numerous tables showing the HD501LJ trouncing the 5000KS in several important categories, but since the 5000AAKS has a different platter arrangement and the like, I'm wondering if it closed the gap.

I wouldn't even keep all their diagrams as useful.
For example how file write performance can be higher than maximum write transfer rate!

Transfer rates are affected by data density and RPM an what I've seen WD5000AAKS is slightly faster than Samsung in that.
And in the end most of the time caching/pre-read algorithms can have much more visible impact to performance. (high STR doesn't necessarily mean high read speed)

If you start looking tests which stress caching/pre-read algorithms WD5000KS wins clearly:
http://www23.tomshardware.com/storage.h ... 7&chart=45
Without its higher transfer rate that Samsung would probably loose in every test so I would expect WD5000AAKS to win it clearly in about everything.
by porkchop
a magazine(pc user) recently did a big hdd test including the 5000aaks and 501lj.

same seek noise but wd has lower idle(something like 25/29db vs 27/29db).
this might be because the samsung vibrates more.
400lj(silentpc reviewed this one- good reference) was also in the test and had the same acoustics as the 501lj.

i'd scan the article, but is it legal if its the current issue?

However, the WD's seek is MUCH quieter than the P120, even with AA off. With AA on MAX, it's very very quiet.

I went back to the P120 since I need quiet idles and don't mind loud seeks.

HDtune tests of the WD vs Samsung, show than the WD is about 10MB/s faster overall.
by rseiler
That would be an interesting read, porkchop.

I came across some additional data points here: http://forums.storagereview.net/index.p ... t&p=240138

It compares the current generations of several 320GB drives (including the WD "AA"), and I would think their relative positions within that class would directly translate to how the 500GB versions would fare against one another.
by porkchop

READ THIS.
i screwed up, upon close inspection the acoustics were taken from the manufacturers specs and therefore redundant.
sorry.

it does give you some idea about the performance though.


edit: i just checked wd and samsungs websites for their hdd specs and they don't match the numbers in the article.

by rseiler
Thanks for the scan.

Did the mag make an ultimate choice between them in the body of the article?

And I sure wish they'd measured temperature as well, since I'm still trying to figure out which runs cooler. I can't exactly use the 5000KS for comparison, since it has a different number of platters, but Tom's Hardware had it running at 47C and the 501LJ at 46C. My guess is that the 5000AAKS is now cooler than the Samsung.

For the record, here are the specs from the vendors:

It seems they converted bels to dBA by simply moving the decimal, but from what I gather it's not that simple. I wish it was, but for now, I think it's more truthiness than truth.
by Firetech

WD are now only AU$185 at Fluidtek

by porkchop
yes! MSY did have them at 175 at one point. i'm sure they'll go down soon.
MSY is good for me cause theres one locally(warranty purposes), i've always believed that if there was anything that screw up in my comp it would be the hdd first.


the 501lj got 95%, 5000aaks 75%.
note however that the price was factored into the score, and the benchmarks can only tell you so much.
both drives were noted as very quiet.


its probably down to personal preference since the drives costs almost the same.

wd finally updated their site to include the aaks, with some interesting stuff about scoring the highest possible score in the vista experience index.
also note that the aaks has exactly the same specs as the new av/ce drives. the tech, acoustics and power are the same, the only diff i could spot was silkstream.

sigh....things are only getting more complicated.
by rseiler
Yes, good find, though the MTBF is probably different as well, since they make a point to actually say what it is in the case of the AV line.
by elec999
My ks makes a buzzing (whisling sound) being brandnew. Really ennoying. Alot of people reported this with ks drives. WD seems to be releasing all kinds of drives. Is there any real different, KS, RE2, AAKS. I guessing the AAKS is the "accoustic" version of the ks.
Thanks
by puscifer
The AAKS is the KS only with 166GB platters instead of 133. The RE2 are dedicated raid drives with better warranty, which i hope they manage to make soon with 166GB platters.
by speedy
* posted in the wrong thread *
by zoob
I just got my AAKS today.

In terms of idle white noise, from loudest to quietest

My KS I purchased way back when it first came out... it's developing bad blocks, so I've filed for an advanced RMA. I wonder if they'll give me an AAKS in return?

The KS has less "whoosh" than the AAKS. The 320/Raptor/AAKS are bunched closely... I guess the best way to describe it is like cars driving in the distance, or my Macbook when there is some CPU load on it. heh.

EDIT: Correction it is a 320 JD not a JS.
by rseiler
Isn't the KS a 4-platter drive? How in the world can it be quieter than the AAKS? And how can the AAKS be in the same group as a Raptor, which I thought were loud (10K)?
by zoob
I don't know.

My AAKS has a silver top, all the other drives have black tops.

When WD switched to the black tops, that's when everything became quiet as they switched to fluid dynamic bearings.

Perhaps the black body design is better than their old silver design in terms of noise? The silver one looks like much less material is used, so perhaps this is the reason it sounds noisier. 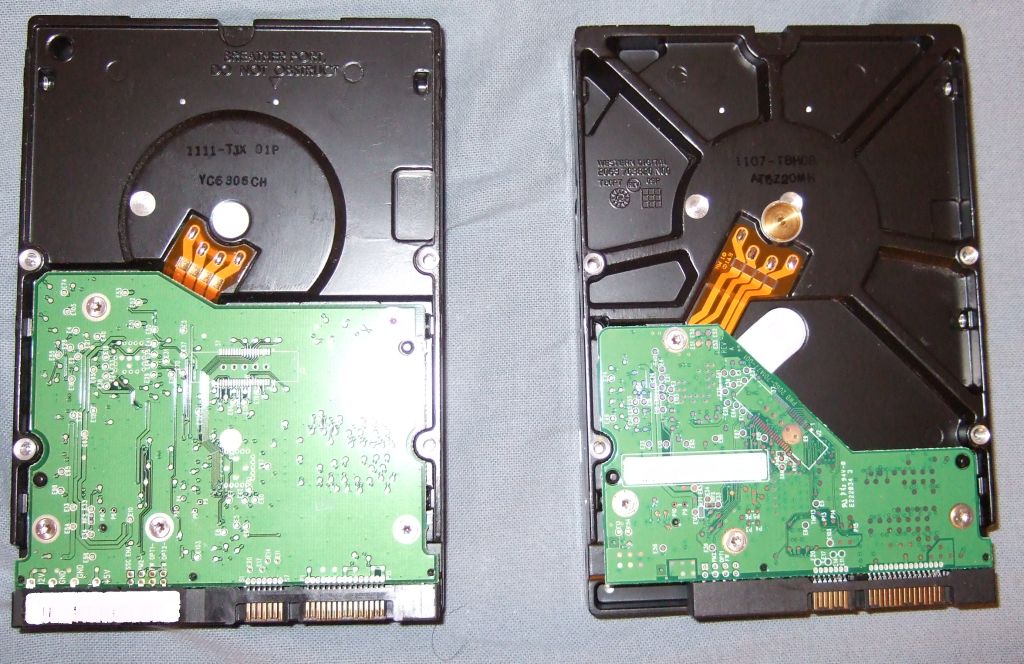 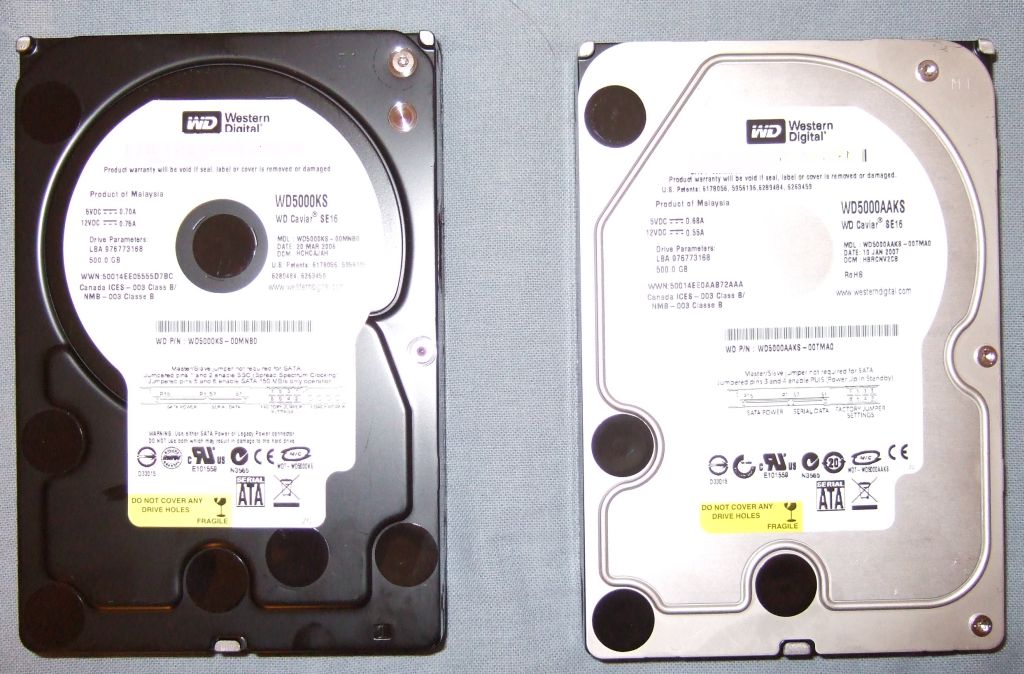 by elec999
This is getting confusing. Which drive is quieter the KS or AAKS.
Thanks
All times are UTC-08:00
Page 1 of 3