Useful conclusion in the second review (Mugen 4):
One good alternative is the Thermalright HR-02 Macho. Another thick, single fan cooler with bare unplated heatpipes and fins, the HR-02 has a similar price and cooling capabilities. The HR-02 is a more versatile cooler as it benefits more from a second fan, its wider fin spacing is more conducive to passive cooling, and its asymmetrical design alleviates any possible RAM interference issues. The Mugen 4's primary advantage is its splendid fan which is a big step up from the HR-02's muddy-sounding TY-140. The Mugen is also slightly lighter and slimmer. You can't really go wrong with either as both are more cost and size effective alternatives to the beastly £60+ dual fan coolers that currently dominate the top-end of the market.

I still have questions for you.
Which one is best for a low power i3-4330 at low rpm?

I understood that Macho has less fins (31) and bigger spacing compared to Mugen 4 (50 fins).
And the Mugen fan is more silent than the Macho.

But he reviews were done with i5 and i7 CPU.

What would you think about a small i3-4330?
The Mugen would do better, with low rpm than could not be done with the Macho fan?

I know, that I can't really go wrong with either as both are more cost and size effective

But when we can choose, let's take the best for our use.

Thanks for your insight.

Well the i3 you are considering is similar to i3 i have on my download station just mine is limited by its clocks, but on the Sandy Bridge and Haswell downclock both to 800mhz on idle both produce very little heat. I have been running mine on HR02 (original, not the macho) + TY140 for over 2 years (its basically the same combo as the macho). Now the weakness of this combo is the fan, not that its bad, imo its pretty decent, but to me its that most of the time i have only been able to run it at 700rpm, i did try 600rpm but the fan ticked, for the average user its fine, and probably its even better that doesnt drop as low, and most dont buy the macho for it being super quiet, but the biggest reason is the cost/cooling, its simply one of the best cooler for the money atm. The HR02 comes the intention of creating a passive cooler, the HR01 was sold without a fan, the HR02 was also sold without a fan, and now the HR22 is sold without a fan, but the macho does much better with a low rpm fan than fanless.

My guess is with a very low rpm the Macho would do better than the Mugen 4, as its going more into the fanless territory, were the more area and widder spacing should give the edge to the HR02, a fan like Noctua NF-A15 PWM is ideal imo, as its a very big controllable range, from 200rpm to 1500rpm, compared to TY140 600-1200, the fan are very similar on the body, size, position of the holes, etc, it will work out fine with the included clips that it comes. 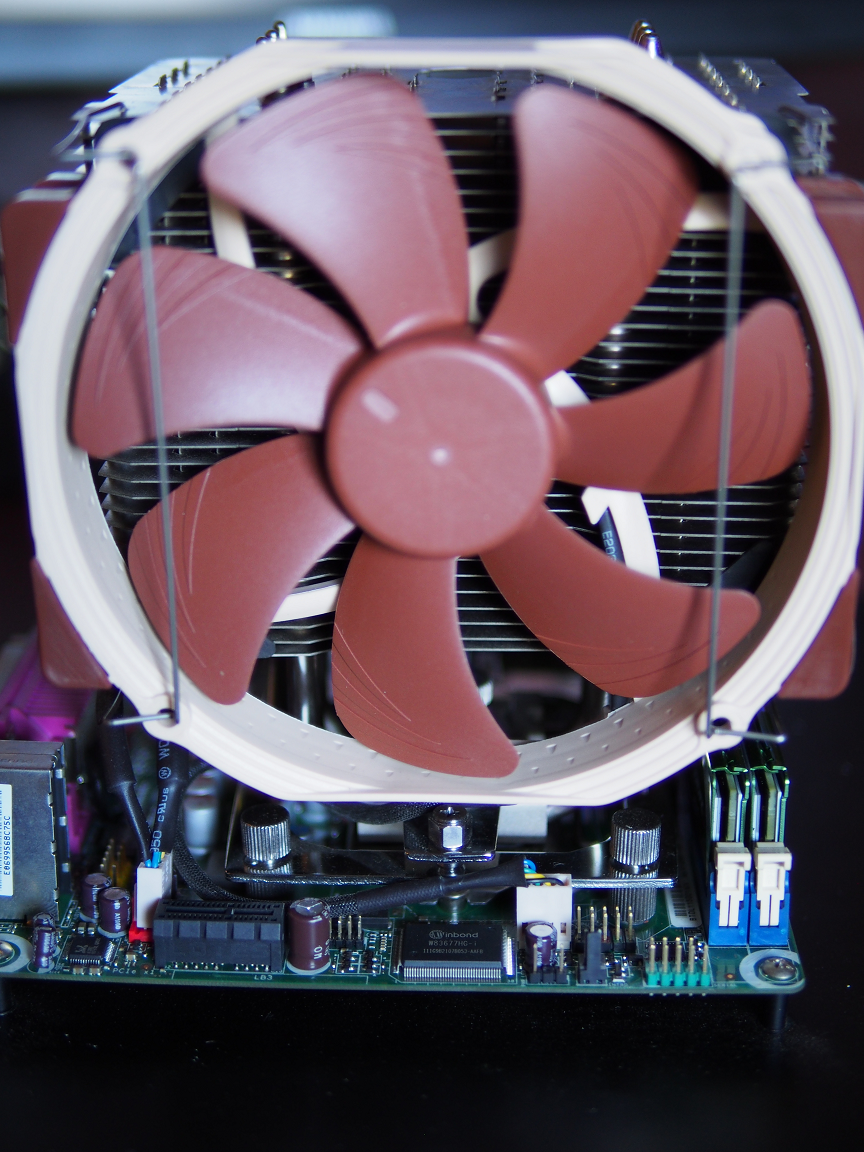 I feel this is the quietest combo you can get for the best cooling at very low rpms, but the problem is you going to need a motherboard that can manage the NF-A15 PWM, a lot have restrictions on the bios into the minimums pwm % you can drop off (like ASUS ROG), a lot have crappy software, some might not work with speedfan by not able to recognize the sensors, etc. MSI bios and Asus FanXpert2 both can deal very well with the fan, thats the two experiences that i have, Intel is also pretty decent on pure bios, AsRock seems also to have good fan management on pure bios (but i haven't tested it to know for sure), not sure how is gigabyte. 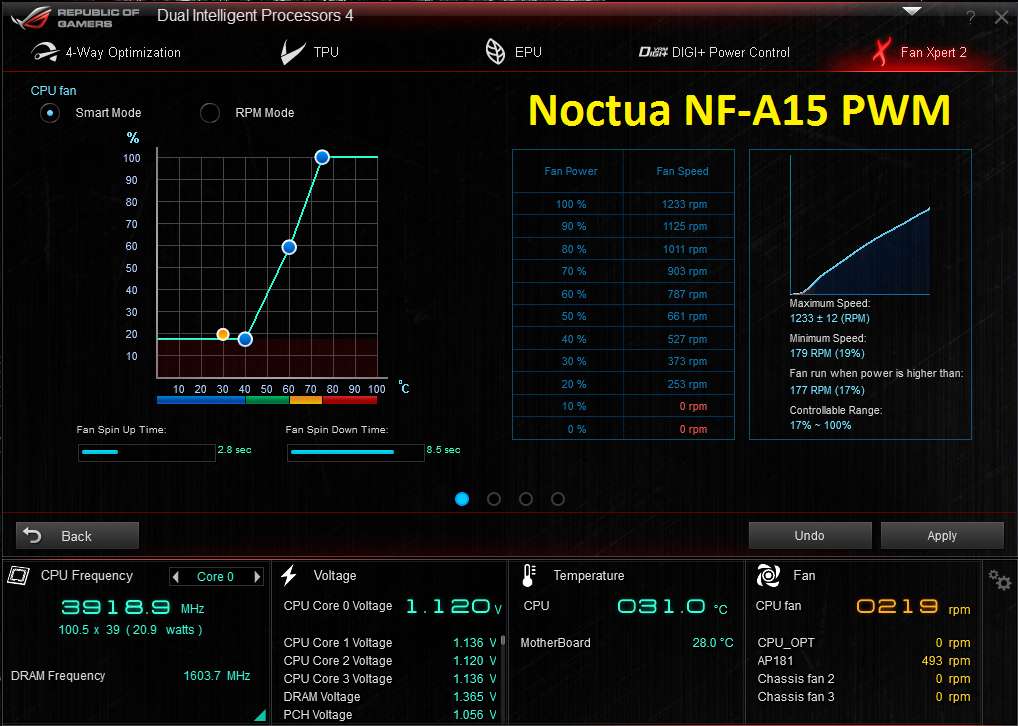 I will look if the HR-02 is available without fan in Austria.

The i3 will be on a GA-H87n-wifi
I think it might be the basic BIOS features. Don't know for the low settings for the fan.
I will search after the info. Thanks.
Top

thierry. wrote:I will look if the HR-02 is available without fan in Austria.

Idk if you will be able to, i mean the origial HR02 was sold without a fan for $80 ( i own 2 of them before the macho version), the biggest complain from reviewing sites was not its performance, its pretty decent cooler, but what Thermalright got burn was because of the price, then came the Macho version, which is basicaaly 3 fin less, no nickel plating on the pipes and a still good mounting bracket but a little less refined, for example no pressure knob for the CPU, the 4 mounting screws are philips and not thub screws, the middle mounting is also like that, overall its not bad at all, personally i like it more as it allows the fan to go even lower. All the before changes + including a fan + lowering the price around $45-50, made it a very good cooler for the money, even high end overclocking sites recommend it, on SPCR is still among the most recommend coolers for that budget.

What i was trying to say with that ramble is that the one without a fan (now discontinued) is more expensive than the fan version (macho). So don't look to hard, if there is still a stock of the old HR02 might be very expensive, the hr02 macho is good for what you pay for as it is.

If you are looking for value for your money, both the mugen 4 and macho offer similar things, stock both are great, imo the thermalright fan is good enough, but not all will agree with that, here were the mugen 4 is better, the slipstreams / glidestreams have very good tone and the fan can be dropped lower than TY140 (now its TY141/147). So if you dont want to spend extra and want the stock better sounding setup, go with the Mugen 4, but if were willing to spend a little more into replacing the TY141 (first test it might be fine for you), then NF-A15 PWM will be a good candidate, as long as your motherboard can take fully control of its range, i think it will end up quieter and perform slightly better.
Top

Thanks for all the additional info.

When I was saying to look for a "naked" HR-02, I thought there were the actual model in 2 types: with and without the fan.

I will continue to learn a bit about all the "silencing theory" around here, to make my mind.

For example, with my current i3-3225 and the stock Intel, it seems to run 1.6GHz at idle, with 1200rpm. Not too noisy.
If I launch a software or something, it jumps to 3.3GHz and the fan jumps also, which makes it much more audible.

I hope with the Macho or Mugen, it would stay at low rpm until the CPU actually warms up.
Not each time the frequency makes a jump.

But again, I don't know enough about all this. I'm still learning.
Top

thierry. wrote:Thanks for all the additional info.


thierry. wrote:For example, with my current i3-3225 and the stock Intel, it seems to run 1.6GHz at idle, with 1200rpm. Not too noisy.
If I launch a software or something, it jumps to 3.3GHz and the fan jumps also, which makes it much more audible.

I hope with the Macho or Mugen, it would stay at low rpm until the CPU actually warms up.
Not each time the frequency makes a jump.

My i7 4770K is also like that, intel has very low power idle states, on Sandy Brdige and Haswell both downclock to 800mhz, on Ivy bridge is 1600mhz, on either case, once you start something that requieres CPU power, the CPU will regain its clocks in some cases even enter the turbo boost, all this moving in my 4770K can make the CPU temp jump from 30C to 45C (this is in a second or two), if the load is not sustained then it goes back to 30C and if its sustain gradually starts climbing, here is the beauty of setting up you own graphs on bios/software, i purposely made all my fans stay on minimum RPMs until 50C, so all this moving from 800mhz to 3900mhz never really impacts the speed up of the fans, until real load is applied, and the temperature passes the 50C temp then all my fans (at different scales) will slowly start to ramp up, even under load i limited the noctua fans and i do find them loud over 700rpms, but all this is very nicely achieved by the bios, and why im so in love with MSI atm (although tempteted to test AsRock in the future with more points of setup on pure bios).

Again will depend entirely into how your gigabyte bios/easytune works and what will it allow you, good luck.
Top

I have a HR-02 Macho on i7-3770k, stock clocks and volts, just turbo all cores to 3.9.
The temperature difference between running with a 14 cm fan at 600 rpm and passive is 4 degrees at load.
That's while running Prime95, so unless you plan to run Linpack, IMO you should be fine with a passive HR-02 Macho.
Top

I agree. There won't probably be any need for fan, since it doesn't help that much, compared to passive operation (with decent case airflow).. If it isn't a problem on i7 chips, I'm sure that it won'f be on your i3.
Top
Post Reply
8 posts • Page 1 of 1