Recommend a Silent Mouse and Keyboard?

I have the BenQ X120 and it is really quiet compared to my Logitech Elite and the laptop-like keys really help in typing faster.

just modded my Micro$oft wireless optical mouse 2.0 with bluetak as per Alistair's original idea. Wrapped each of the 5 microswitches in tak and pressed it in with jewellers screwdriver, used what i had left to fill some of the voids, and the clicks are much muted. the good thing is retaining the action, and I dont have need of silent clicks right now so the muted ones are great.

someone mentioned dynamat earlier.... i think the spray version is kinda large and might not be suited for this intricate work. Bluetak is a good dampener (ask any audiophile) so i think its a good material in this case.
Perhaps rubber paint might be used to quieten keyboards and mouses if painted in the right place, i think tyrewall paint remains too sticky but there's probably an alternative
There are 10 kinds of people, those who understand binary and those who don't.
[url=http://folding.extremeoverclocking.com/user_summary.php?s=&u=202355/]My Folds[/url]
Top 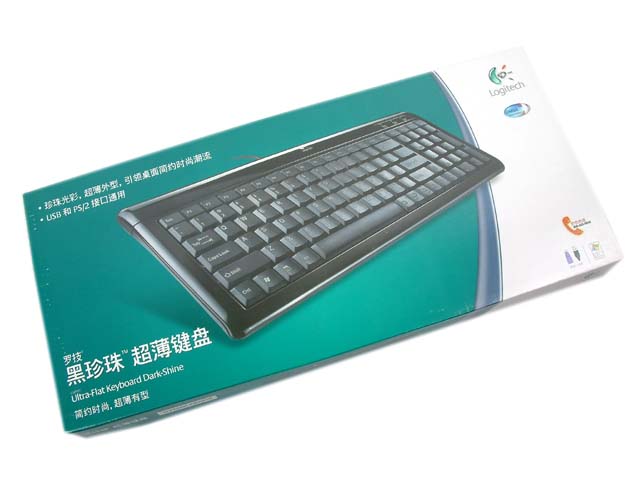 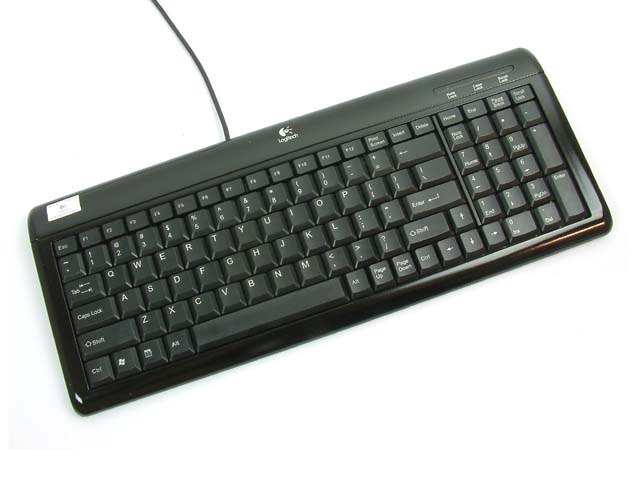 That looks like a great keyboard... where can I get one?

Although, the right shift key does look like it could be a nuisance.

Edit: It's called a Logitech UltraFlat Dark Shine and it's on the Logitech Japan site. Also, it has a complement called the Light Pearl. Still no dice on where to buy in the US though.

I have been using Logitech diNovo Bluetooth Laser. It is really silent, but the best part with this keyboard and mouse is the ergonomy. The usability of the mouse overcomes any problems I would have with the clicks. Besides there's no turning back when you enter the world of wireless communication...
[color=blue][size=84]Antec Solo case /w Seasonic S-12 430W, Gigabyte GA-MA78GM-SH2, X2 4850e /w Scythe Ninja, 2x2Gb DDR2800, WD Raptor 150GB, 500GB WD GP in Antec MX-1, BenQ G2400W, Logitech diNovo Laser, Logitech z-680[/color][/size]
Top

how true that is! when I used to turn around with wires connected I had to turn right back else I'd get wrapped up. Now I can spin ceaselessly

There are 10 kinds of people, those who understand binary and those who don't.
[url=http://folding.extremeoverclocking.com/user_summary.php?s=&u=202355/]My Folds[/url]
Top

not sure if this has been mentioned yet, but if you are looking for silence, then stay away from the MS Wireless mouse/kb combo. it makes faint electrical buzzing noises!

i had to return it 3x before i could find one that works properly...
Top

Erssa wrote:Besides there's no turning back when you enter the world of wireless communication...

I don't think there is a great market for wireless trackballs.

I'm still using the old Microsoft Intelliball. Nice soft clicks and scroll, best pointing device I ever used. I think they were concentrating more on their peripherals than they were their operating systems back then... however the 'left' button doesn't click as well as it used to. Come on trackball fans, can't you recommend a quiet one?
It's coming back
Top

Any luck on that Logitech Dark-Shine?
Top

unfortunately, it seems that this keyboard is only meant for the Asian market. It has been available since June.

Have you guys seen this keyboard: Optimus

See link for more pictures... doesn't seem to be too practical... but the cool factor is definitely there! Oh, the glories of OLED.

Techno_Pride, why did you post that Dark Shine keyboard here if no one can get it

. Although that right shift key is very unnerving -- had one on my Sony laptop and it drove me nuts!
Top

Seen it mentioned a number of times before, think it'll still be a while before it is released.


daba wrote:Techno_Pride, why did you post that Dark Shine keyboard here if no one can get it

It is available in Singapore where he is located

A friend who just went there told me about seeing it in stores there as well. Not sure how quiet it is, but personally I prefer the 3 section 104+ key layout (or whatever it is called).
Top

Can any SPCR'ers situated in Asia send one to me?
Top

my microsoft internet keyboard is very quiet. If you don't press all the way down very fast, it's near silent. Same can't be said for my logitech mx 510 though. It has audible clicks.

For everyone who wants a VERY quiet slim keyboard, go for the Microsoft Confort Curve 2000. I bought one and is far quieter than the UltraX or any other keyboard that i've tried. Recommended.

NeilBlanchard wrote:I wish that it was available in all black...

UltraX Cordless. Not sure if it's available in US tho.

Yes it is. But is it any good? Central didn't have one on display..

Also check your local mom 'n pop computer stores. There is a chain in North Carolina, Intrex Computers, that carries them for $57.99. I think it's more of an OEM item so you won't find them at any big-box stores.

daba wrote: Techno_Pride, why did you post that Dark Shine keyboard here if no one can get it

I tried out the Microsoft Comfort Curve 2000 in a store today and loved it.

Picked up a Microsoft Comfort Curve 2000 today at CompUSA. This keyboard is the quietest keyboard I have used out of the 10 or so I have owned. It really differentiates itself in that it has a very muffled sound, unlike the laptop-style keyboards (UltraX included) which have a very "clickety" high-pitched sound. The Logitech diNovo sounds most similar to this keyboard, although this keyboard is definitely quieter.

Here is a quick line-up of the keyboards I can think of off the top of my head:

One should be warned about the aesthetics of the keyboard... it's really this dark bluish color rather than pitch black as the online pictures (and box) portray.
Top

daba wrote: One should be warned about the aesthetics of the keyboard... it's really this dark bluish color rather than pitch black as the online pictures (and box) portray.

Is it bluetooth by any chance..? I know the new bluetooth version of the Wireless desktop Elite is blueish.

Anyway, i used to like the Ultra-X and diNovo but got tired of the laptop keys. Or actually i ripped out some keys on the dinovo and broke the mountings, went out to buy a Ultra-X and found the keys to be very squishy. quiet but squishy and with poor feedback. Then i tried the MS boards again and decided i like them better.

Currently im using a Wireless Desktop Elite and Intellimouse Explorer 2.0 with gel-padded wrist thingie mousepad on my second computer, and a Wireless Desktop Comfort Edition and a MX518 with Ulti-Mat teflon mousepad and teflon skates on my primary machine.

I thinks this Comfort Edition is much better than the older ergonomic keyboards, instead of having the keypad cut in two halves its a more pleasant curve

The thing is neither of these boards are silent, louder than the logitechs at least, but i find myself typing much faster and having less errors in my text with these than the logitechs, i think its because these require less pressure on the keys and have better tactile feedback or whatever its called. With the logitechs i often ended up with missing letters.
Top

No, it's not BT AFAIK. This is definitely the quietest keyboard I have encountered, aside from the soft polymer keyboards. Compared to the UltraX, it is both quieter and "squishier."
Top

I'm sold. I'm glad I saw this because my keyboards keep breaking... My Ultra X lasted about a year and both my backup keyboards (both fairly old) have sticky and dead keys =p
Top

I dont like the Comfort Edition anymore. Reason: while playing games you often need to hold down one or several keysfor a long time, like when walking or driving, this f*cker has some "feature" wich works so that you stop walking every10seconds or so. I didnt find any settings to disable this "feature". Battlefield2 is buggy enough without having issuses with the keyboard

I AM DISAPPOINTED!
Top

Has anybody tried this cherry keyboard ?

What do you think about the cherry keyboard in general?


I'm not accustomed with 85 keys keyboard (no num pad here) , what about the noise and the key touch ? I like the design but if it's not silent I will try an other one.

thanks for reading.
Top

Another vote for the Microsoft Natural Ergonomic Keyboard 4000 and Microsoft Comfort Curve Keyboard 2000. I am trying out both of them, and they are equally very quiet and seem solidly built.
-G
Top

nici wrote:I dont like the Comfort Edition anymore. Reason: while playing games you often need to hold down one or several keysfor a long time, like when walking or driving, this f*cker has some "feature" wich works so that you stop walking every10seconds or so. I didnt find any settings to disable this "feature". Battlefield2 is buggy enough without having issuses with the keyboard

What feature? I've played UT2K4 on this with no problems!
Top

daba wrote: What feature? I've played UT2K4 on this with no problems!

Ok so its a bug then, but in BF2 it simply would not work for me. hold down W key, after a while i stop. press it again and start to move, then stop again. Works fine on my noisy crappy Ultra-X copy and diNovo. Not tried other games though, and dont play BF2 much either as i keep getting connection errors at least every ten minutes..
Top

I need a quiet/silent keyboard to replace my Microsoft Wireless Desktop Elite, as I'm in college and my roommate can't sleep with my typing.

Was looking at the Benq x800, and came across the x805...will this be just as quiet as the x800? i'm inclined to believe that the only difference is that the 805 is wireless.

Push comes to shove, I'll go wired, but I'd rather not.

Any insight or other suggestions are highly appreciated
Top

I posted this earlier in the Deals forum, but if anyone is interested in the Logitech diNovo Wireless Desktop (the non-bluetooth, notebook-oriented version) you can get it at Best But right now for $79.99 on sale. This set seems to get mixed but generally favorable reviews, and at that price it seems like a steal. I don't know how long they are on sale; the sale price is on their website and was not posted in the store, but mine rang up at the sale price at checkout.
[size=75]Antec Solo; AMD Phenom II 955BE; MSI 785GM-E65; 4 Gb DDR3; Antec NeoHE550; Sapphire ATI 4850; WD 1001FALS/Samsung F1 1Tb SATA HDs; Pioneer DVD-106; Plextor 708A DVD+/-RW[/size]
Top