In the section when they talk about the fan, it says the noise under load is under 20dBA by showing a blue bar graph next to a red one (for the current Mac Pro), which is at about 30dBA.
Top

You must be looking at a different slide set than me. All Anandtech shows is the idle noise.
Top

Thanks for the heads up!
Top

Introduced in May 2013, Xeon E3 v3 is the first Haswell microarchitecture based Xeon. It uses the new LGA 1150 socket, which was introduced with the desktop Core i5/i7 Haswell processors and is not compatible with the LGA 1155 that was used in Xeon E3 and E3 v2. As before, the main difference between the desktop and server versions is added support for ECC memory in the Xeon branded parts. The main benefits of the new microarchitecture are better power efficiency and a faster GPU.

It seems the new MP is using old Ivy Bridge Xeons. The question is: why?
Top


That makes sense now. Thanks.

Looks like the cooling system does the job. Here's some reviews:

The new Mac Pro also contains only a single fan. Located just below the top of the cylinder, this fan sucks air up from vents at the bottom of the computer, and over the thermal core to cool it, and then pushes the now-warm air out the ring at the top of the enclosure. Instead of the wind-tunnel-like noise levels you’d sometimes hear with previous Mac Pro models, the 2013 Mac Pro’s fan is generally very quiet. In fact, in normal use, it’s nearly silent: If you put your ear next to the vent on the top, you hear only a quiet hum. (Apple told us the computer produces only about 12dB of noise at idle, and roughly 17dB under load.) In my quiet office, I couldn’t hear the Mac Pro’s fan over the noise of my 2010 iMac, even when live-rendering some effects on 4K video in Final Cut Pro X. That’s not to say you’ll never hear the fan, but you should expect a much quieter experience than with previous models.

love how quiet the machine is. It's impossible to hear over an external hard drive or ambient air conditioning noise, even under heavy loads. The only sign you'll have that it's cooling itself is the gentle rush of warm air coming out the top of the unit, which makes a surprisingly wide and uniform column of wind.

The idea, of course, is for the blades to effectively cool the system, but also to make less noise in the process. According to Apple, the new Pro reaches 15 decibels while under load, versus 30dB on the last edition. And when the machine is idle, it simmers down to just 12dB -- very similar to the lower-powered Mac mini.

Throughout, the Mac Pro gets a bit warm, but it's rarely hot, and it's always quiet. For lack of a better word, you'd have to provoke the machine to really be bothered by the heat: The warmest area is at the top of the chassis, and even then, you'd have to be sticking your hand near the vents to feel it. Otherwise, the chassis does get a tad warm -- and can take a while to cool down -- but it's much cooler than the air blowing out of the top. Avoid sticking your fist into the opening at the top and you'll be fine. As for noise, I tried hard to get the fans spinning, but they stayed quiet. Actually, if you put your ear up to the opening at the top, you will hear a faint purring, but again, you'd have to be the sort of wise guy willing to put your ear next to the hottest part of the machine (not recommended).

Thanks - 15dBA or even 18dBA under full load is impressive indeed.
Top

What is the relative cost of building a similarly quiet and powerful PC with dual firepro or quadro cards?
Top

avithomas wrote:Question is whether it is $3000-$4000 dollars of impressive.

What is the relative cost of building a similarly quiet and powerful PC with dual firepro or quadro cards?

It is not just the chips and quantity of memory - but also the I/O and bus speeds, and OS and driver support. If anybody even matched the cooling design, I'd be very surprised.

It is expensive, I'll grant you.
Top

Besides, I don't even think you can, for example, buy the same Samsung PCIe SSD @512 GB retail anywhere. At least, I haven't seen it yet.

As of this moment in time, the nMP is pretty unique. Maybe in a year or two you could build one with identical specs and components cheaper.
Top

It's a very niche product, but awesome industrial design.
Top

whispercat wrote:Besides, I don't even think you can, for example, buy the same Samsung PCIe SSD @512 GB retail anywhere. At least, I haven't seen it yet.

As of this moment in time, the nMP is pretty unique. Maybe in a year or two you could build one with identical specs and components cheaper.

Is mSATA the same PCIe mini? The connectors look the same to me.

Regardless, I know for sure that there are some PCIe drives for PCs.

It was however a very sincere question. I initially had a pretty WTF reaction to the price, but those Pro GPU's are pretty expensive. As far as OS compatibility, I have tried OSX and decided I am completely uninterested in it, so it is a mute point to me.

Obviously no PC can match the form factor, but you can probably match the decibel level and system performance. I just am not sure how much it would exactly cost.
Top

Is mSATA the same PCIe mini?

The connector is similar in appearance to a PCI Express Mini Card interface,[41] and is electrically compatible; however, the data signals (TX±/RX± SATA, PETn0 PETp0 PERn0 PERp0 PCI Express) need a connection to the SATA host controller instead of the PCI Express host controller.

Thanks for the links. From the iFixIt teardown - the 450W PSU: 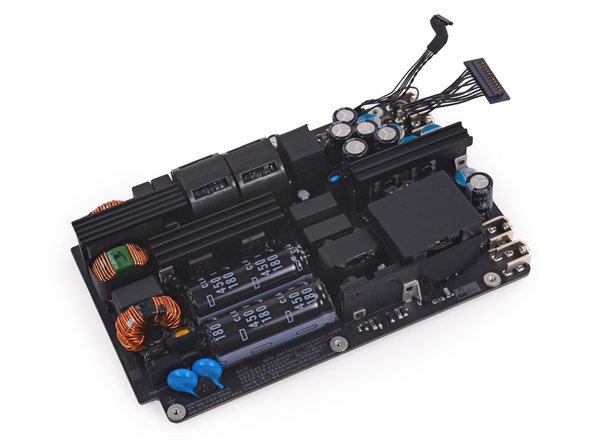 That is impressive, as it is only cooled by the single fan ot the top of the system, and the air flow through the tightly packed circuit boards can't be high volume.
Top

Speaking of power, from Anand's review:

Next I tried a heavier workload on the CPU: a H.264 video encode. Here I just ran the x264 5.01 benchmark in parallel with the LuxMark workload. Once again, I saw no drop in CPU or GPU clocks although I believe I was approaching the limits of where that would hold true. The system was pulling an average of 410W at that point, with peak power draw at 429W.

I ran a combination of FurMark at 2560 x 1440 and Prime95 (in-place large FFTs) across all GPUs and CPU cores. The GPUs peaked at 97C, which is pretty much as high as a 28nm Tahiti should ever go. The CPU hit a similar temperature, with most cores hovering around 95C. GPU clocks seemed ok, with both GPUs running between 650 - 850MHz (base - boost). The CPU on the other hand dropped down to 2.1GHz (I even saw a short excursion down to 2GHz). Average power while running this workload was 437W, peaking at 463W before CPU throttling kicked in.

95-97C is a lot but I doubt anyone is going to be running anything like those temps and noise in actual use. You do have to wonder however just how long the system would work for at those temperatures. I'm actually surprised just how small and basic the triangular heatsink is. There is more space that they could have used plus additional black plate coolers could have been placed on the graphics cards.

Anyone want to start crowdsourcing a silent, compact PC design based upon more or less standard components? I think collectively we could do better!
Top

edh wrote:Anyone want to start crowdsourcing a silent, compact PC design based upon more or less standard components? I think collectively we could do better!

I would love to participate.
But at the moment, is there any other compact PC, silent, so small and so powerful on the market?
I don't think.
So, it's not a so trivial thing to create...

Some more thermal and noise info via Ars Technica.
Top

From that Ars Technica review:


If you're browsing the Web or doing something that isn't pushing the CPU or GPUs, it's almost completely silent. I had two of them on at one point and, because the monitors weren't on, I didn't know they weren't asleep—the new Mac Pro is that quiet.

This largely comes down to the custom-engineered case. The Mac Pro leaves no room for idle hot air, and, in a boxy tower, the fans work a lot like speakers facing a wall with holes drilled in it. Sure, you can hear the sound on the other side of the wall, but a lot is bouncing back into the room. The Mac Pro's hole on the top with vents on the bottom ensures that this is totally avoided. There's only one large fan to create a single stream of air and only one spot for the air to go. It makes so much sense, you realize how completely inept the traditional tower design is.

I saw the Mac Pro yesterday in person - the color is quite different than many photos show. It is kind of a luminescent shiny dark gray. It was impossible to hear it in the Apple store. Price is between $3,000 and $10,000 depending on the configuration. I'm wondering if programs will be reworked to take full advantage of multiple cores and dual video cards - this would make it more compelling.

The air flow design is the breakthrough aspect of this computer. And the I/O and bus speeds are probably indicative of things to come.
Top

Did you stress test it while you were there?

No, sadly I didn't. It is tempting to see how it would run DataCAD, and SketchUp and Folding@Home ...
Top
Post Reply
63 posts