Want to talk about one of the articles in SPCR? Here's the forum for you.
Post Reply
8 posts • Page 1 of 1

Nice, the NH-D9DX i4 3U has the same 110mm height as the NH-D9L. The D9DX states it's made specifically to work in 3U cases. (hence the name) Which means the D9L should work as well for socket 115x servers. I built a 3U server a while back that we use for our backup system. I picked up the shortest tower heat sink I could find but it still didn't fit. I don't believe I was able to find any Minjas at that time. So in the end, I just used the stock HS. Blah. Nice to see an option for future reference.
Top

Thanks for the review mike, very interesting cooler specially for small builds.
Top

This is a superb review, as always. I'm always a fan of Noctua reviews.
Top

How does the Noctua NH-D9L performance compare to the Scythe Ninja Mini? Better or worse?

I currently have an Antec NSK2480 HTPC case with a Ninja Mini using only the two 120mm case fans on an Intel Core i7-4790K overclocked to 4.7GHz.
It runs a little hotter than I'd like, though it doesn't thermal throttle under normal multi-threaded application benchmarks. It WILL thermal throttle very quickly under aggressive synthetic benchmarks like Prime95 however.

So I'm looking for better cooling options and it looks like the NH-D9L would fit the bill if it performs better than the Ninja Mini.

As an aside, I'm also considering lapping the CPUs heat spreader a little because it's very concave. I have to use quite a lot of thermal paste to get good contact on the heatsink.
Top

It is difficult to find an exact comparison as they are from different eras. I would suspect the Noctua will be better by a few degrees particularly if you run 2 fans but how are you running your Mini Ninja as it can also run 2 fans? What fans are you running and what speeds?
Top

edh wrote:What fans are you running and what speeds? 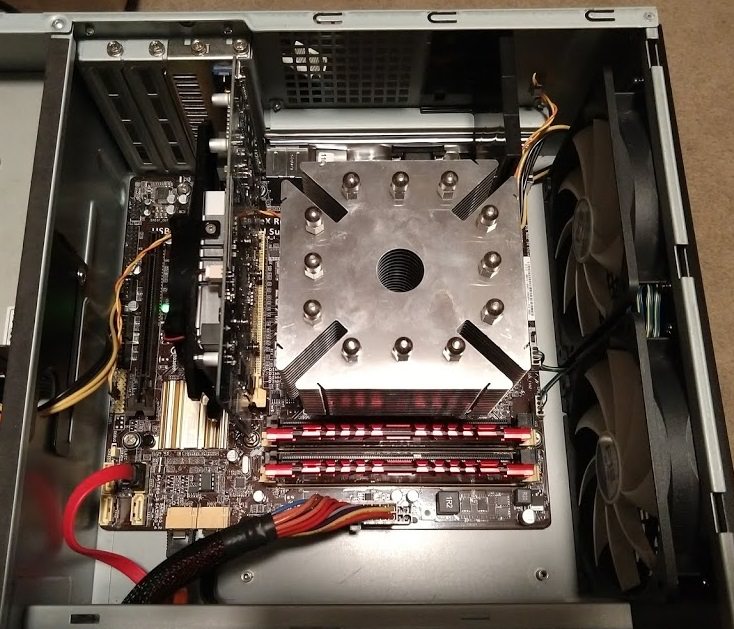