Fractal Design made their name on the strength of the Define series, minimalist
elegant tower cases that utilize noise limiting features to carve out a nice
niche in the market. They’ve been expanding their catalog substantially, three
more lines of cases, the Node for home theaters, the value-oriented Core series,
and the Arc which focuses more on cooling and airflow without compromising their
iconically sleek Scandinavian aesthetics.

The Arc Mini was released in 2011 along with the Define Mini, a pair of microATX towers with similar designs but differing styles. We never had the opportunity to examine the original but if the R2 can live up to the Define Mini it would be in excellent company — it’s currently SPCR’s best performing microATX case.

The Mini R2 lacks the grace and sophistication of the Define series. There
isn’t a hint of aluminum nor is there a door at all, but rather a more generic
looking plastic bezel with fine lines on the surface mimicking brushed aluminum.
This is the first Fractal case we’ve used with a side window, something added
to entice enthusiasts who love gazing into their systems’ innards to admire
their cabling or lighting, or to simply check if anything has caught fire.

At 16 inches, the Arc Mini R2 is slightly taller than the Define Mini. Both
cases are unusually tall and large for a microATX case — add an inch or
two and you’re in ATX territory. Inside you’ll find bays for six 3.5 inch drives
and two 2.5 inch drives, three stock fans of a possible seven, a three-speed
fan controller, dust filters, removable drive trays and cages, and support for
a large radiator if you’re into watercooling. What you won’t find are noise
damping mats and foam. Aside from the fan controller, the Arc Mini R2 isn’t
particularly noise-conscious.

The packaging and accessories included with the case are minimal. A black cardboard
box stuffed in one of the drive trays contains the necessary screws and standoffs,
along with a few plastic zip-ties. It’s less of an accessory box as it is a
necessity box.

The build quality of the Arc Mini R2 interior is satisfactory. The frame is stiff and the drive area feels relatively sturdy despite not being riveted in place and having a pair of removable hard drive cages with no structural support at the sides.

Assembly of the Arc Mini R2 is fairly straightforward and if the interior ever feels cramped during installation, relief can be had by removing the drive cages and installing any hard drives at the end of the process.

The Arc Mini R2 inherits the same dual rear/front 1200 RPM 120 mm fans from the Define Mini, but also sports an additional 140 mm model secured to the ceiling. The Define Mini also had a variable fan controller at the back, whereas the Arc Mini R2’s controller is located at the front as has three set speeds.

As all the fans belong to the Silent R2 series, their acoustics are similar. The top and rear fans are pleasantly smooth with a some bearing chatter audible close-up but inside the case with the side panels running interference, it’s impossible to detect. The front fan has a tendency to click, but this is a result of the intake fan mount rather than the fan itself. We encountered the same issue with the Define Mini.

Together, the overall sound quality is above average compared to most stock case fans and the controller’s preset speeds offer a decent range to suit individual needs, though obviously we would prefer more granular control. At 5V, the total SPL was a very quiet 16 dBA@1m, while at 7V, it measured 22 dBA@1m which is still fairly reasonable. If you’re running hotter, high-end hardware, 12V may provide the cooling you’re looking for but at a heavy acoustic cost. 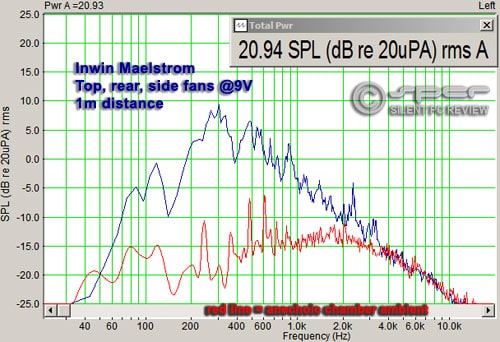 Sitting idle with the case fans set to 5V, our test system was relatively cool
and quiet, with the CPU hovering around the 30°C mark and the GPU below
40°C, with a total noise output of 21~22 dBA@1m. As we mentioned previously,
hard drive vibration was an issue with this case due to the loose drive trays.
In our case, if we positioned the tray just right, it would produce a moderate
amount of vibration noise audible at close proximity. If it wasn’t positioned
just so, the drive would cause an obnoxious buzzing. A screw can be inserted
through the side to brace the tray against the cage but this didn’t help in
our case. In the end we resorted to placing some foam above and below the drive
to keep it steady. You can also try adding tape to the drive trays for more
friction.

On full CPU and GPU load, our methodology dictates we balance the noise and heat by adjusting the video card fan speed manually to keep the GPU at or around 90°C as a reference point. For the Arc Mini R2, no fan speed change was required from what the card was using at idle. Increasing the case fan speed to 7V took some of the pressure off the GPU, allowing us to slow the fan by about 100 RPM. This produced a net noise gain of 1~2 dB but helped the CPU cool down by 3°C. It’s not an acceptable tradeoff in our opinion, but if the video card fan had less admirable acoustics we would consider doing it just to make the system sound a bit more pleasant. 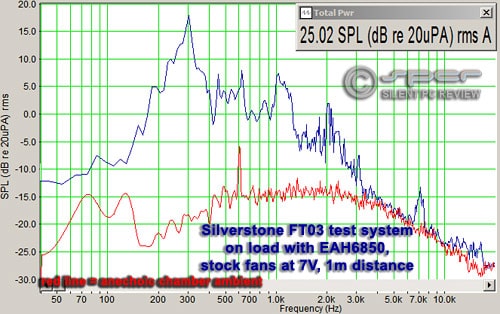 The Arc Mini R2’s performance was similar to that of the Define Mini, with a 1 dB improvement in SPL but a 4°C deficiency in CPU temperature. These are the two best performing microATX cases we’ve tested. The larger than average size paired with a traditional layout produces superior results than the smaller Sugo SG09 and Temjin TJ08-E from SilverStone.

There’s no denying that the Arc Mini R2 is built on the same foundations
as the Define
Mini. And why wouldn’t it be? It’s a sound core, a microATX tower with
excellent acoustic performance, noise prevention features, and the familiar
elegant minimalist aesthetic that Fractal Design has been evangelizing since
its inception. However, the Arc Mini R2 takes the basic blueprints and goes
in a different direction, one that is accommodating of a larger, broader audience.
The chassis appeals more to enthusiasts, with increased ventilation at the top
to accommodate large radiators (which seem to be all the rage these days), an
additional stock 140 mm exhaust fan, including SSD mounts behind the motherboard
tray, and a vanity window on the side panel.

All these changes alone would have been fine but unfortunately they also took
away key features. The aluminum door is the most noticeable omission, removed
in favor of a more accessible front bezel with a less appealing plastic construction.
Inside, the noise absorbent sheets have vanished, and the once solid hard drive
mounting system is no more. The drive caddies use a similar design to those
of yore but they fit noticeably looser than in previous Fractal models, making
them more prone to hard drive vibration. Basically, most of the things that
we loved about Fractal and the Define series has been removed, leaving behind
a case with less cachet for a silent PC enthusiast.

As microATX cases go, the Arc Mini R2 is a fantastic performer, but it lives in the long shadow of the Define Mini which is still available and priced the same, about US$100. We prefer the former — the Arc Mini R2 adds some minor improvements which we wouldn’t mind seeing in an updated version of the Define Mini, however, what is subtracted from the equation is substantial. Fractal’s desire to expand beyond the niche they started out from is understandable — we just wish it didn’t cost them their identity. Remove the branding and change the black/white color scheme, and we probably wouldn’t recognize who built this case.

Our thanks to Fractal Design
for the Arc Mini R2 case sample.