The Fractal Design Core 500 is a Shuttle-style mini-ITX case that offers a bit of everything at an affordable price, including excellent cooling & moderate noise.

Fractal Design gets most of its acclaim for its Define series of tower cases that emphasize silence and airflow wrapped in elegant minimalist designs. Their budget Core line uses most of the same foundations but strips out some of the finery, boiling down and distilling what makes their cases great into something simpler and less fashionable but more affordable.

With the Core 500, Fractal brings this practical approach to the mini-ITX form factor. The chassis conforms more or less to the design popularized by Shuttle, the original maker of the breadbox shaped enclosure that first introduced many hobbyists to the concept and potential of the SFF PC. It’s also somewhat larger than most cases of this type, slightly inflated to accommodate the modern trappings that even bigger enthusiasts cases are expected to offer.

A long graphics card? Check. A tall CPU heatsink? Of course. A radiator up to 280 mm in size? No problem. A 140 mm fan at the back? Fine. Magnetic dust filters? Of course. Storage? Have three 3.5 inch hard drives and three of the 2.5 inch variety as well. What about a 5.25 inch drive bay? A little dated but sure, why not? For a chassis occupying just 19 Liters, it seems to have an answer to everything. Like the bigger iterations of the Core family, the 500 offers something for everyone.

The Core 500 is packaged simply in a fairly plain box with limited decoration. Fractal doesn’t offer much in the way of accessories, just the necessary documentation, screws, and a handful of zip-ties.

The chassis is reasonably well constructed though the few modular components are on the thin side. A steel frame running along the ceiling acts as the mounting point for fans/radiators while a drive cage located above the front-mounted power supply position can house both a 3.5 inch and standard 5.25 inch drive.

The assembly process is not very difficult though like most mini-ITX cases, it is wise to plug in the various cables into the motherboard before the board is mounted. The only real issue encountered is the front panel connectors coming loose when tying up the cables. The provided cables are also too long.

The system is placed in two states: idle, and load using Prime95 (2/4 instances, large FFTs setting) and FurMark, an OpenGL benchmarking and stability testing utility. This puts more demand on the CPU and GPU than any real life application. Throughout testing, system temperatures, noise levels, and power consumption are recorded. During the load test, the system and GPU fans speeds are adjusted to various levels in an attempt to find an optimal balance between cooling and noise while maintaining a GPU temperature of 85°C (at an ambient temperature of 22°C).

For our baseline noise tests, the system is left idle, the CPU fan is set to its minimum speed under PWM control (400 RPM), and the GPU fans are off by default. The system fan(s) are connected to controllable fan header(s) and are set to a variety of speeds using SpeedFan. This gives us a good idea of what the stock fan(s) sound like at different speeds with minimal interference from other sources. 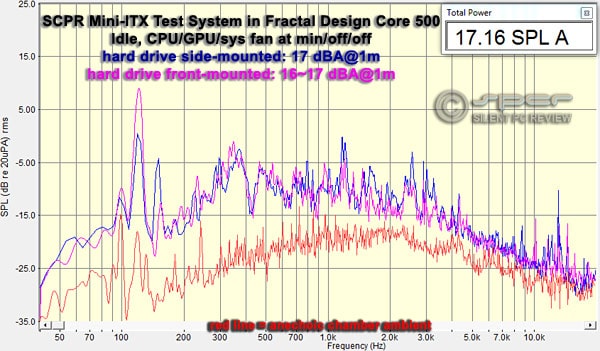 Before fan testing, a comparison of the two different drive mounting systems is warranted. With all the fans turned off or set to minimum speed, the measurable difference between our SSHD mounted at the front and side is minor with the front position registering about half a decibel lower. However, the vibration-based noise produced with the drive at the front is more pronounced, as evidenced by the sharp 120 Hz tone corresponding to the drive’s 7200 RPM motor. When secured on the side of the chassis, it’s slightly louder but the sound generated is spread out more evenly along the spectrum. The side position makes drives sound less conspicuous and is preferable for component compatibility as well.

As the Core 500’s lone stock fan is a mere 1000 RPM model, it’s not capable of making much noise. In fact, it doesn’t start to make a measurable impact on our system until set to 50% speed. The machine remains relatively quiet up to 80%, and even at top speed produces a modest 25 dBA@1m. 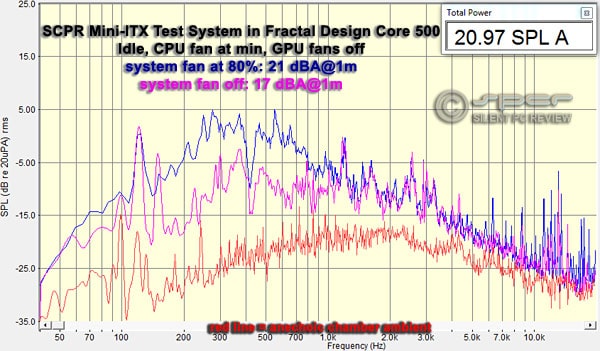 Up close, the stock fan emits slight undesirable clickiness but as it’s embedded inside the chassis and masked by the other components, the resulting sound is benign and unlikely to offend even the most golden-eared observers. The noise produced is smooth and gentle without a hint of tonality.

The Core 500 handles our load test with aplomb, besting our 85°C GPU temperature target by 4°C with the GPU fans running at the minimum setting and the single case fan operating at modest speeds. As the GPU cooler is the greatest noise contributor, it’s not possible to make the system any quieter than 24 dBA@1m, though this figure lowers by 2 dB when measured from the right side, with the GPU fan vent positioned away from the microphone.

Removing the dust filters results in a 3°C and 4°C cooling improvement for the CPU and GPU respectively, and these are modest changes compared to typical filters in other cases. The mesh material is quite fine so it doesn’t restrict airflow much. 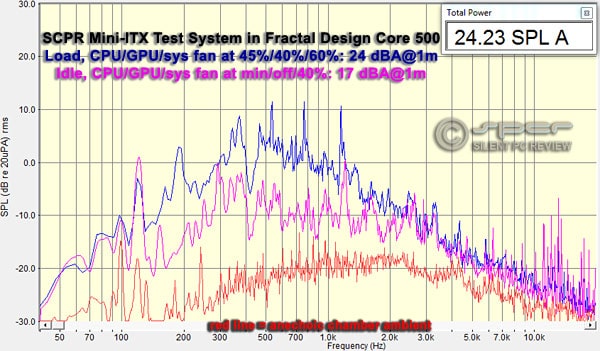 The noise quality is slightly inferior to our baseline tests as the smaller GPU fans give the machine a higher pitch and adds a rougher quality to the overall acoustics but overall, the system still sounds pleasant.

Relatively speaking, the Core 500 is a solid performer offering low noise and unsurpassed GPU cooling. Since updating our mini-ITX case test configuration, only our Mini-ITX
Gaming Build using the BitFenix Prodigy is superior, though it had an additional fan and was capable of a lower GPU fan speed possibly due to an older driver being used at the time. If we could match the GPU temperatures or speeds, the noise difference would likely halve.

With its plain looks, the Core 500 is not imbued with a lot of style, but the underlying design is remarkably solid. Though the intake vents along the sides of the front panel are overly restricted by foam linings, it’s well ventilated thanks to the large grills on the side and top of the case and fine magnetic filters. The result is a well-cooled machine that can be operated quietly with just the single included exhaust fan.

The chassis is a bit wider than other cases of this type, and the extra girth allows for an additional two 2.5 inch and 3.5 inch drive placements on the right side, complimenting the front drive cage that boasts both a 3.5 inch and a standard 5.25 inch drive mount. Enthusiasts can delight in 280 mm radiator support on the ceiling, provided the aforementioned drive cage is removed. The chassis is also tall enough for lanky tower heatsinks and deep enough to accommodate a 31 cm long graphics card.

My only complaint is that the front panel cables in our sample were only tenuously connected. Glue was applied at the factory to keep the headers connected but they simply wouldn’t hold on, with the gentlest of tugs prying them loose. This can be remedied easily enough by the user but it’s surprising to see such a defect in a product from a well respected manufacturer.

Overall, the Core 500 is an excellent all-around mini-ITX case and a superb value. It’s a faithful translation of Fractal Design’s larger Core series cases for the smaller form factor and a fine addition to the pantheon of Shuttle/cube style SFF enclosures.

Our thanks to Fractal Design
for the Core 500 case sample.