When people ask SPCR to recommend an ATX tower, we think immediately of Fractal Design’s Define series. It hits all almost all the important case assets (for SPCR): no-nonsense aesthetics, modest size, reasonably good build quality, well-ventilated front panel, noise damping material, and built-in fan controller. The last two iterations, the Define R4 and R5, made 140 mm fan mounts standard on every side, and incorporated removable hard drive cages to improve graphics card compatibility. These two improvements increased its appeal to the lucrative gaming market but did so without tarnishing the underlying design.

The newest model, the Define S, hopes to gain traction with both budget users and watercooling enthusiasts. Physically, it looks just like the Define R5 with its recognizable ModuVent covers on the top of the case hiding each ceiling fan placement and numerous ventilation slits running down the sides of the front bezel. The physical dimensions are practically identical, as are the build materials. The Define S is a lower cost variant that lacks a fan controller and implements an interesting design twist. On the inside, all the drive cages and 5.25 inch bays have been taken out, so the front panel no longer functions as a door.

More importantly, this frees up the entire front portion of the case, allowing air to flow from up to three 140 mm fans, mostly unimpeded. 3.5 inch drives are mounted vertically on the right side of the case and there’s only space for three drives rather than eight on the R5. In the space vacated by the drive cages, Fractal has included mounting points so the area can repurposed for installing a pump and reservoir. At launch, they are only offering the Define S in black for a MSRP of US$80 for the standard model and US$90 for the windowed version, $30 cheaper than the R5.

Unfortunately I don’t have a picture of the retail box as it was too tightly hugged by the shipping box and extracting it wasn’t worth the effort. In any event, there’s nothing notable about the packaging. The side window is lined with a protective plastic covering on both sides, and it ships with a small accessory box and assembly guide. Fractal Design provides all the necessary and screws (save those for additional fans), a nut-driver for the brass standoffs, a handful of zip-ties, and reservoir mounting brackets.

The internal construction of the Define S is reasonably solid and all the drive mounts, front/top panels, and filters fit snug. However, due to the way it’s designed, it’s not as structurally sound as the R5. Without any traditional drive bays to stiffen the frame, its hollowness makes it feel more flimsy, at least when it’s empty.

The assembly process is fairly straightforward and easier than most cases due to the ample space. There are no drive cages and optical drive bays to get in the way and the area behind the motherboard tray fairly wide.

The Define S ships with two identical 140 mm 3-pin fans, one at the back and one at the front, with a specified speed of 1000 RPM. The fans included with our sample are slightly slower, topping out at just over an average of 910 RPM, so even at maximum speed, the Define S is less noisy than most cases out of the box, outputting only 22~23 dBA@1m with our idling test system. The fans can run quieter of course but will require some form of fan control as the case lacks the R5’s built-in controller. 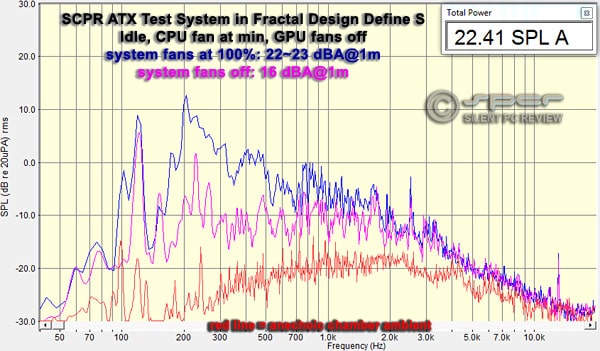 While the include fans are identical models, the front sample emits a faint buzzing sound that increases in pitch with speed, while the rear fan buzzes less and generates a slight rattle that is only audible from behind the case. Other than that, both have fairly good acoustics, sounding mostly smooth throughout their range.

Unfortunately, the case’s vertical hard drive mounting scheme doesn’t handle vibration very well, as indicated by a strong tone being generated at 120 Hz, corresponding to our SSHD’s 7200 RPM motor speed. While the drive is isolated with grommets, it hangs on its side without any additional physical support, shaking the motherboard tray. When a vibration issue like this crops up I attempt basic modifications to see if there’s a simple way of remedy the situation, but the unorthodox design makes these methods ineffective. There’s no easy way to brace the drive sufficiently to reduce this effect.

The results of our load tests are surprisingly linear compared to other cases. As the system fan speeds are increased, CPU and motherboard temperatures go down (the SSHD, being relatively isolated isn’t effected by anything), and noise levels go up, even though improved cooling allows the GPU fans to be slowed down. Either the 60% or 80% system fan speed level can be considered the sweet spot depending on whether cooling or noise is a priority. Personally, I’d go with the quieter 60% setting as its rare for a case to stay below the 24 dBA@1m mark with our test parameters. 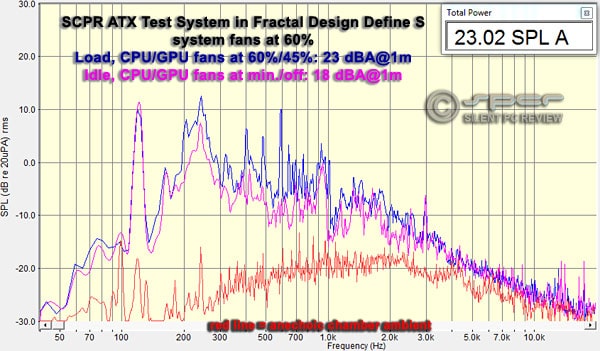 On load, the higher CPU fan speed and the GPU fans turning on doesn’t affect the overall sound significantly. The video card fans increases the pitch somewhat, but the machine still sounds pleasant enough with no audible tones or other defects.

Compared to previously tested cases around the US$100 price-point or lower, the Define S offers modest thermal performance and a slightly lower noise level, at least in its optimal fan speed configuration.

The Define S is an unusual alteration to the R5. A lower cost, simplified version that lacks a few nonessential features like the fan controller, extra front USB ports, and side panel locking mechanisms is understandable, but this doesn’t completely jibe with the focus on watercooling. Taking out drive cages to make room for custom loop components makes sense, but enthusiasts who pursue this line of cooling have reasonably deep pockets so cutting extras to save a mere US$30 is unnecessary. And if Fractal Design truly wanted to make a more watercooling-friendly tower, they would have also added some more room up top to allow for thicker, ceiling-mounted radiators, as that position offers more open airflow than the front. [Editor’s Note: But a real change in the height of the case would have required retooling, which is no piffling expense.]

The lack of drive support may be a problem for some, but most users don’t need more than three 3.5 inch drives, and 5.25 inch bays become less relevant with each passing day. If you do require an optical drive, a hotswap drive rack, or a memory card reader, there are many external options. The other notable 5.25 inch accessory is an aftermarket fan controller but motherboard fan control are often quite capable these days. The new drive mount scheme isn’t as secure as the R5’s traditional drive cage, making drive vibration a potential problem. If you’re sensitive to that kind of noise, it would be prudent to stay away from high RPM drives altogether.

That being said, my overall impression of the Define S is positive as it retains much of what’s good about the R5. It’s well put together, has superb cable management, and its well-ventilated design produces excellent performance with only two fans. The R5 is more versatile, but this budget version is certainly no slouch, and it’s nice to see quality ATX tower case enter the market for less than US$100.

Our thanks to Fractal Design
for the Define S case sample.

The Fractal Design Define S is Recommended by SPCR