At first glance, the Node 202 does not appear to be much different from other HTPC cases, aside from Fractal Design’s familiar minimalist design. It is a slim desktop enclosure small enough to fit in a media cabinet. There are many such enclosures on the market, usually sporting microATX motherboard support, half-height expansion slots, and both 3.5-inch drive and perhaps slim optical drive support. The fancier models will have a small LCD and/or an IR remote included to enhance the experience.

The Node 202 is different, perhaps best described as Fractal’s version of a console-sized PC gaming case. While not quite as small as the 7.2 Liters of an Xbox One, it is pretty close at just 10.2 Liters volume. It comes with a stand to place the chassis in a vertical position for best performance, as the intake vents are less restricted in this orientation. The enclosure supports mini-ITX motherboards, an SFX power supply (the more expensive model has one included), two 2.5 inch drives only (no optical drive), and a full-sized dual slot video card. Dust filters line all the main vents and for extra cooling, and twin 120 mm fans can be installed next to the graphics card. Inside, the CPU and GPU areas are separated, something Fractal claims helps the system to run cool even without any case fans.

The Node 202 ships with a multi-language user guide, a power cord, and an accessory box inside containing the necessary riser cards to install a video card, a handful of zip-ties, screws for mounting the motherboard and two 2.5 inch drives, and soft case feet.

The Node 202 has a segregated layout with the CPU/motherboard occupying the right side along with the power supply while the right side is dedicated to the graphics card. Additional cooling is only offered for the GPU, in the form of two 120 mm fan mounts directly under the slot.

The open sides makes it easier to install the motherboard and plug in all the connectors, but if you need to add/service case fans, pulling the bottom off and reattaching it isn’t a fun experience. One of the plastic tabs broke off during my time with it and I would often worry about the others breaking if the chassis wasn’t aligned properly with the cover. I wish they had provided some long bolts so fans could be mounted from inside rather than underneath. It’s also somewhat annoying that the screws for the top cover are underneath the case.

The system is placed in two states: idle, and load using Prime95 (2/4 instances, large FFTs setting) and FurMark, an OpenGL
benchmarking and stability testing utility. This puts more demand on the CPU and GPU than any real life application. Throughout testing, system temperatures, noise levels, and power consumption are recorded. During the load test, the system and GPU fans speeds are adjusted to various levels in an attempt to find an optimal balance between cooling and noise while maintaining a GPU temperature of 80°C (at an ambient temperature of 22°C).

Our reference video card, the Asus GTX 980, fit comfortably in the Node 202, but under synthetic load (two threads of Prime95 plus FurMark stability test), the GPU core heated up excessively, causing it throttle clock speeds until it reached only ~90% of its normal power target, even with the fans blowing at full speed. These components should pull more than 300W from the wall but power topped out at under 270W. The CPU fan had its work cut out for it, requiring top speed just to keep the processor under 70°C. I typically don’t use the Resident Evil 6 Demo Benchmark for case testing but it is a less demanding, more realistic test. Even so, during the most taxing points of the benchmark, the GPU didn’t fare much better, still requiring 100% fan speed. The noise level during these tests was unreal, a skull-shattering 41~42 dBA@1m.

Adding fans would improve efficiency but only slim models can be used, which wouldn’t help much. Standard 25 mm thick fans would press right up against the GPU fans, and this fan stacking would create horrendous noise. The horizontal position is worse, as a brief test was stopped shortly after I noticed the GPU temperature shooting up even more quickly than in the vertical position. The main vents become more restricted in this orientation as the included feet aren’t tall enough to provide good clearance for the vents.

Given this poor result, a more modest card seems like a better choice. The only modern low power GPU we had on hand was a passively cooled Zotac GTX 750 (55W TDP). Obviously, it had a much better time of it. During the Resident Evil test, the CPU fan’s minimum speed was more than sufficient, and the single extra exhaust fan spinning at 500 RPM was enough to keep the GPU temperature at a reasonable 80°C during the most demanding portions. The noise level was barely higher than the machine idling with just the CPU fan at minimum speed. The synthetic test required higher fan speeds, mainly on the part of the CPU cooler. So while the two portions of the case are cordoned off, the heat from the GPU still had a great effect on the CPU section. 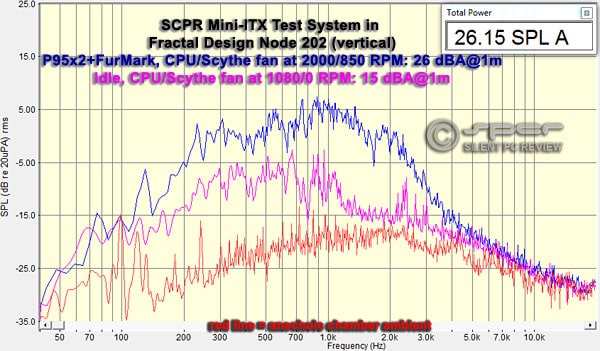 The system generated 26 dBA@1m in this state which is somewhat loud but the subjective quality of the noise was excellent as both the Noctua and Scythe fans have pleasant acoustic profiles. Fractal’s power supply didn’t make any discernible noise during testing except for a slight buzzing when idle. During the load tests, it was quickly drowned out by either the CPU or GPU fans. In this configuration, the CPU fan was by far the biggest noise contributor so an improved cooling solution would go a long way to silencing the machine (on its own, the Scythe fan produced less than 20 dBA@1m at 850 RPM). Also keep in mind, the 26 dBA@1m figure is with the case angled diagonally from our mic with CPU vent facing partially toward it. A 2 dB drop was observed when the case was flipped around, so your position relative to the case also plays a part in how the system sounds.

Like many HTPC or media center style cases, the Fractal Design Node 202 has fairly simple exterior design, but it’s thinner than most. This extra sleekness costs it both optical and 3.5 inch drive support which means users have to rely on expensive high capacity solid-state drives and/or a slow 2.5 inch mechanical hard drive if they need more than a basic amount of storage. The simple drive cage and video card bracket are cleverly integrated into the chassis design, so the interior layout is very clean rather than filled with various brackets. The included power supply is just powerful enough for any system you would want to use in such an enclosure, and runs quiet enough not to be noticed.

The Node 202 is supposed to be a compact case that can handle a gaming system but how well it performs in this regard depends heavily on the power requirements of the video card, and the type of cooler employed. The Asus Strix GTX 980 (165W), which performs admirable in most larger cases, struggles in the Node 202, heating up so much that it’s unable to operate at nominal levels even with the fans running at full, earsplitting speed. The Strix, like the majority of mid/high-end video cards on the market, is equipped with a heatsink/fan assembly that blows toward the PCB. This works well enough in a tower case, but not in the Node 202.

The two fan mounts underneath the video card seem like a good solution to this problem, but for most dual slot cards, only less efficient slim fans can be used without directly interfering with the GPU fans. Standard 1″ thick fans could be used if you pull the stock fans off the video card cooler but I’m not sure how many people would go to those lengths to make it work. The best out-of-the-box solution would be to use a graphics card with an exhaust cooler; generally these types of coolers are louder but in this kind of setup, they may be more efficient. In general, you’ll struggle to keep the system quiet in this case with any GPU rated higher than ~100W.

The Node 202 is a fresh take on an overlooked case genre, an attempt to make a slim low key chassis suitable for gaming systems. It’s an admirable goal but ultimately its success depends on your standards for gaming performance. While the interior provides enough room for a mid/high-end GPU, the environment is only hospitable to more modest cards if low noise is anywhere in your design goals.

Our thanks to Fractal Design
for the Node 202 case sample.