Fractal Design’s take on a desktop media PC case, the Node 605 is a sturdy, elegant chassis focused on limiting noise, vibration, and dust build-up. It offers ATX board compatibility in a surprisingly small footprint, but usability is far better with a mATX board.

Since bursting onto the scene three years ago, Fractal Design has primarily focused on improving the vertical tower style case design used by the majority of PC enthusiasts. The Core and Arc are fairly popular amongst noise conscious users but the Define series remains their most well-known, their bread and butter, having gone through several iterations over the years in the quest for perfection.

The Node line hopes to translate their previous success into smaller, more niche form factors. The Node 304 is a Shuttle-style mini-ITX breadbox while the Node 605 we’re looking at today is Fractal’s take on the classic desktop media center. It’s a case type that’s been around for a long time but every model we’ve encountered has been lacking in one way or another. It will be interesting to see what Swedish engineering can do for the genre.

The boxy shape and brush aluminum face is reminiscent of SilverStone’s Grandia series though the exterior has a more attractive design, taking minimalism to heart even further. A discrete flap at the bottom hides the front ports and optical drive bay; when closed, the only things visible on the bezel are the power button/LED and the pleasing Fractal branding underneath. 120 mm fan grills are found on either side, two on the right and one on the left, while the top of the enclosure is completely featureless. Usually some form of ventilation is found on the case ceiling with this type of chassis.

The accessory box contains the usual assortment of zip-ties, screws, and standoffs, as well as mounting brackets for the slim optical drive bay. The user manual is surprisingly brief, only listing all the contents and a diagram of how it all goes together with no extraneous descriptions or notes. It’s a far cry from the manual from the recently reviewed Nanoxia Deep Silence 1 which had full-sized color pictures and text espousing the benefit of each and every feature and design element.

The interior of the Node 605 has a solidly constructed steel frame but is incredibly cramped for use with an ATX motherboard with almost no clearance above/below the edges of the board; in fact using an ATX board makes the slim optical drive bay unusuable. It’s really better suited as a microATX case.

The Node 605 ships with a pair of 120 mm, 1200 RPM fans, similar to those found in the Define Mini, however we found that the 605’s fans generated a greater level of noise. The Mini has the advantage of being a tower case with a door blocking out some of the noise while the 605’s fans are directly exposed to the environment.

At full speed the stock fans emitted 30 dBA@1m, 3~4 dB higher than the Define Mini. Its range was fairly good, dropping down to close to inaudible levels at 5V, which is one of the available settings on the included fan controller. The controller is powered by a 4-pin molex connector and can switch between 5V, 7V, and 12V for up to three 3-pin fans. 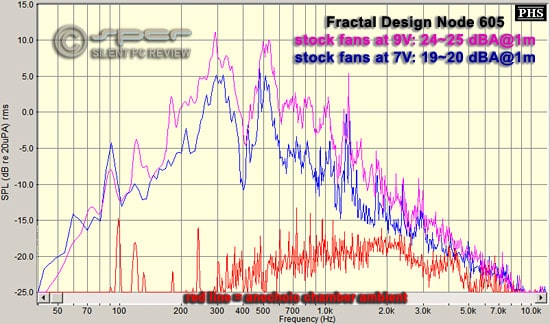 While the overall noise level was fairly high for 1200 RPM models, we don’t have much to complain about with regards to sound quality. The fans’ acoustic profile was almost entirely broadband and neither our mic or our ears picked up any notable tones. They have a very smooth and innocuous sound.

Our test system, consisting of a Core i5-750 quad core CPU and a Radeon HD 6850 GPU, was sufficiently quiet in its idle state, measuring 19~20 dBA@1m with the CPU fan at 9V and case fans at 5V. There was also a distinct lack of hard drive related noise; the thick top cover fit very snugly on the chassis so it wasn’t prone to shaking and the hanging drive mounting system with grommets neutralized most of the side-to-side vibration. However, the CPU and GPU temperatures were more than 10°C higher than we’re used to seeing for this configuration in a typical microATX tower.

On full synthetic CPU + GPU load, the Node 605’s underwhelming thermal performance was further exposed. The GPU fan had to be set to above 4000 RPM in order to keep the GPU at ~90°C and the CPU was equally toasty. Pumping up the case fans at full speed helped alleviate the load on the GPU fan, allowing it to spin down by 700 RPM, but noise level was still an earsplitting 35 dBA@1m. The CPU heated up close to throttling temperature so its fan was also cranked up to 12V (we normally leave it at 9V).

It seems that the components simply produced more heat than could be expelled by the case’s cooling system. With the way the fans were arranged from the factory, both the CPU and GPU lacked direct airflow. In addition, our HD 6850, like many video cards on the market, uses a cooler that blows toward the PCB rather than an exhaust style, so much of the hot air built up above the GPU as the top of the enclosure doesn’t have any ventilation points. The positive pressure airflow produced by the stock fans simply wasn’t enough. 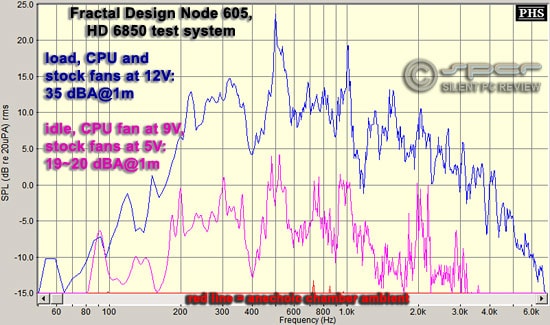 The Node 605’s temperatures and noise levels were significantly higher than previously tested microATX towers. From a thermal and acoustic perspective, it doesn’t even come close to remotely stacking up. Desktop style enclosures are inherently at a disadvantage due to CPU heatsink restrictions and fan positioning limitations and the restrictive nature of the Node 605’s design doesn’t do it any favors.

The Fractal Design Node 605’s design places most of its focus on limiting dust and noise. The very fine mesh fan grills keeps larger particulate out of the case, as does the positive pressure airflow scheme. The stock fans have a nice sound and if they’re too loud can be dropped down to 7V or 5V via the included controller. The noise absorbent mat on the top panel helps with standing waves and weighs it down, providing additional stability. The dampened hard drive trays do a wonderful job eliminating drive vibration, though they make it difficult to access motherboard connectors.

What you won’t get out of the Node 605 is cooling proficiency. As a performance case with a high powered CPU and/or GPU, it’s completely out of its element. The enclosure is cramped given its total volume of just 25.5 L and without any ceiling vents, the stock fans have a heck of a time pushing out all that hot air. Our thermal/acoustic load results were abysmal compared to larger, tower style cases. Thankfully, the primary intended purpose of desktop style cases is for media center PCs which have less demanding requirements and workloads. The Node 605 is infinitely better suited for this application.

The Node 605 is retailing for around US$150, which is on the high side for this genre of case. Aside from the memory card reader and fan controller, it doesn’t offer any extra functionally over similar, lower cost cases, but it does deliver almost premium build quality. The chassis and panels are solidly constructed and of course nothing screams quality like a thick aluminum front bezel. You’d also be hard pressed to find a more attractive desktop chassis; the brush aluminum face, minimal adornment, and hidden ports combine to form a striking look that doesn’t scream for attention.

Our thanks to Fractal Design for the Node 605 case sample.