The Gelid Silent Spirit and Scythe Samurai ZZ are a pair of modestly sized top-down CPU coolers with 92 mm fans. While neither will win any performance awards, their size is an asset in cases too small for large heatsinks with 120/140 mm fans.

The Gelid Silent Spirit and Scythe Samurai ZZ are a pair of modestly sized
top-down CPU coolers with 92 mm fans. Such heatsinks are an appropriate choice
for the more common middle of the road processors found in most desktop PCs.
They are typically far superior than stock cooling solutions, but do not perform
nearly as well as large tower coolers. However, their size is an asset, particularly
in cases that are not wide enough to accommodate the plethora of big heatsinks
with 120/140 mm fans. 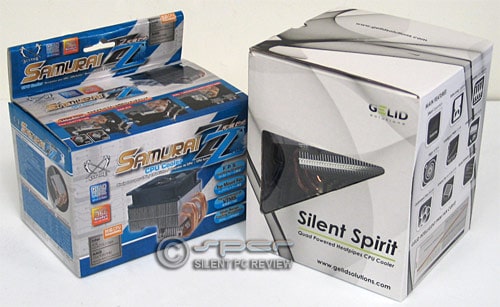 Though Gelid is a relatively new name in the business, it was founded by former
employees of Arctic Cooling, giving it instant credibility. Given the company’s
provenance, it’s no surprise to see the Silent Spirit’s fan has the same style
construction as some found on Arctic Cooling Alpine series of heatsinks. As
It lacks a tradition box casing, its impeller lays naked, visible from all sides.
The four struts bend at the edges forming feet that stand on a ring which is
attached to a clip-on frame using soft fan isolators. Great lengths have been
taken to prevent the fan from directly touching the heatsink and to dampen vibration.
Perhaps most interesting of all, the bulk of the heatsink does not lay flat
— it is uplifted a bit to one side so the fan blows slightly off to the side.

The Silent Spirit comes with nothing inside the box aside from the heatsink,
a pair of plastic place-holders, and a set of AMD mounting clips. LGA775 clips
are pre-installed, and a square of thermal compound is pre-applied to the base.
LGA1366 clips are available but must be purchased separately.

The Scythe Samurai ZZ takes a more straight forward approach. It’s a 3-heatpipe
cooler with a straight up-and-down design featuring a 92 mm Slip Stream fan.
The fan is mounted in a polar opposite method to the Silent Spirit, with a pair
of wire clips that clamp on very tightly — they’re actually difficult to
take off without pliers. If the two fans are similar noise-wise in free-air,
the Scythe would likely be louder given how it’s mounted. The Samurai ZZ has
an inherent performance advantage though since the fan housing helps generate
pressure by directing airflow downward and the fan is closer to the CPU and
motherboard PCB since the heatsink isn’t angled upward.

The Samurai ZZ also boasts better compatibility. Its set of three mounting
clips allows it to be installed on all current AMD and Intel desktop platforms
and even socket 478.

The Silent Spirit features 4 copper heatpipes and 43 aluminum
fins. It measures 111 mm high on the short side, 127 mm on the tall side, and
weighs approximately 350 grams, 280 grams without the fan.

The Samurai ZZ features 3 copper heatpipes and 47 aluminum fins.
It stands 94 mm high, and weighs about 480 grams, 390 grams without the fan.

The most critical aspect of installation is for the heatsink to
be securely mounted. The more firmly it is installed, the better the contact
between the heatsink’s base and the CPU itself. It’s also less likely to fall
off. Ease of installation is also important — a simple mounting scheme
means less time spent installing, and reduced likelihood of user error.

Testing was done on our new
AM3 heatsink testing platform for small and low-profile heatsinks. A
summary of the test system and procedure follows.

With a fanless power supply and a solid state drive, the test system is silent
under the test conditions, except for the CPU cooling fan(s). At full load,
the total system power draw is 132~140W AC, with the CPU and VRMs drawing 85~91W
DC (measured at the AUX12V connector), depending on their respective temperatures.

Load testing was accomplished using CPUBurn to stress the processor, and the
graph function in SpeedFan was used to ensure that the load temperature is stable
for at least ten minutes. The stock fan was tested at various voltages to represent
a good cross-section of airflow and noise performance.

The Silent Spirit’s stock fan is a clone of those used by Arctic Cooling, a
7-blade model with fluid bearings, minimal housing, soft-mounted to a plastic
frame that clips onto the heatsink. The fan can start with as little as 3.4V,
which is atypical for a PWM model.

Acoustically speaking, the stock fan is fairly good. It is turbulent, buzzy,
and generates a hum at 9V~12V. The hum disappears at 7V, and the character becomes
mostly smooth. It is quiet at 6V with a slight rattle audible up-close. At 5V,
it is practically inaudible.

The Scythe fan is a Slip Stream, though their 92 mm variants have fewer blades
and less curvature.

Like other Slip Streams, this 92 mm variant is very smooth, but buzzy at 9V
and higher. Oddly, the fan is significantly louder when mounted on the heatsink
than in free air, measuring about 7 dBA higher when the fan is set to 9V or
higher. Thankfully the difference is much less at lower fan speeds, 3~4 dBA
at 8V, and only 2 dBA at 7.7V. At 7.5V and below, the fan is inaudible in both
scenarios.

The Scythe Katana 3, a
slanted but mostly upright cooler, is equipped with the same fan model and fan
clips but the noise difference was much smaller when we tested it. The increase
in noise on the Samurai ZZ is mostly turbulent, and likely caused by the air
bouncing off the motherboard. Taller downblowing coolers don’t seem to be affected
by this phenomenon.

Note that these heatsinks were tested on our new AM3 test platform. An Athlon
II X4 630 with 95W TDP is the processor. The CPU/VRMs on our new platform draw
between 85W and 91W DC (depending on temperature) at the AUX12V connector, slightly
more than the problematic LGA775/Pentium D950 set up we had been using in the
past. For full details, please see Postscript 2 of SPCR’s 2010 CPU
Heatsink Test Platform on the new
AM3 heatsink testing platform for small and low-profile heatsinks

The Silent Spirit with its padded and frameless stock fan delivered very good
performance at 9V and 12V with a thermal rise over ambient of just above 20°C.
The CPU heated up by 3°C at 7V and at 6V there was an additional 10°C
jump. It’s effectiveness weakened dramatically as the fan speed was reduced
to quiet levels. At 5V, the temperature climbed 18°C higher than at 6V.

Our reference Nexus fan performed 5°C better at 12V/16 dBA compared to
the stock fan at 6V/15~16 dBA. At the 12 dBA level, the Nexus crushed the stock
fan by an unbelievable 17°C. Note that the Nexus was placed flat on the
heatsink without any support. Swapping the fan in this manner in a real-life
scenario would require an alternate method to secure the fan, such as twist-ties.

At higher fan speeds, the Samurai ZZ was comparable in performance to the Silent
Spirit, but generated a lot more noise, but at lower fan speeds, the Samurai
ZZ was far superior. At 8V/18 dBA, the thermal rise above ambient was 25°C.
This barely increased at 7.7V/15 dBA, and there was only a 3°C rise at 7.5V
even though the fan had become inaudible. The Samurai ZZ performs superbly with
very limited airflow.

Our reference Nexus fan attained the same thermal rise at 12V/16 dBA as the
stock fan at 9V/25 dBA. At 9V it was slightly louder than the stock fan at 7.5V,
but 1°C better, making it wash at that level.

Paired with its stock fan, the Samurai ZZ’s greatest asset is its amazing performance
at lower fan speeds. When operating at fan speeds that generate 18 dBA@1m or
less, its cooling proficiency barely changed. So while it may be a poorer heatsink
than a 92 mm tower cooler like the Xigmatek
HDT-SD964 at higher fan speeds, for ultra quiet operation, the Samurai
ZZ is the better choice.

The Silent Spirit is a few degrees behind the Samurai ZZ and Big
Shuriken at the 15~16 dBA level, but at 12 dBA, its performance drops
to the point where it is beaten handily by the Arctic Alpine 64, which incidentally,
can be purchased online for as little as US$10.

Using our reference Nexus fan seems to make things a little more even, but
the Samurai ZZ still holds a substantial lead over the Silent Spirit, and is
only 1°C off the performance of the HDT-SD964.

The Gelid Silent Spirit is certainly a quiet CPU cooler thanks to a smooth-sounding,
frameless fluid bearing fan, the mechancally decoupled isolation from the heatsink,
and the fact that it sits more than 1 cm away from the surface of the heatsink.
The fan blades’ distance from the fins and the relatively small fin area limits
its cooling capabilities, though, particularly when the fan speed is slowed
down. At the 15~16 dBA level, our reference Nexus 92 mm fan beat the stock fan
by 5°C, but at 12 dBA (close to inaudible) it was absolutely destroyed to
the tune of 17°C. It seems to us that all the effort invested into limiting
the amount of noise generated by the stock fan would have been better spent
in simply finding a good fan with a standard box housing. Still, even with the
reference fan, the Silent Spirit ran about 5°C hotter than the Samurai ZZ.
Both coolers can be found for as low as US$30, but the Silent Spirit appears
to be inferior in every way.

Though the design of the Scythe Samurai ZZ makes its excellent fan noisier
than in free air, its performance was still superb. It cooled our Athlon II
X4 CPU well when the fan was set to produce 18@1m dBA, but its resiliency as
the fan speed was reduced was far more impressive. The CPU temperature increased
by only 3°C when the fan was slowed to an inaudible level. When paired with
our reference fan, it became even stronger, making it competitive with smaller
tower coolers like the Xigmatek
HDT-SD964. If you’re in the market for a modestly-sized downblowing
CPU cooler, the Samurai ZZ should definitely be on your short-list.

Our thanks to Gelid
Solutions and Scythe
Co., Ltd. for the Silent Spirit and Samurai ZZ heatsink
samples.