GigaByte GA-965P-DS3: Core 2 Motherboard for Everyone 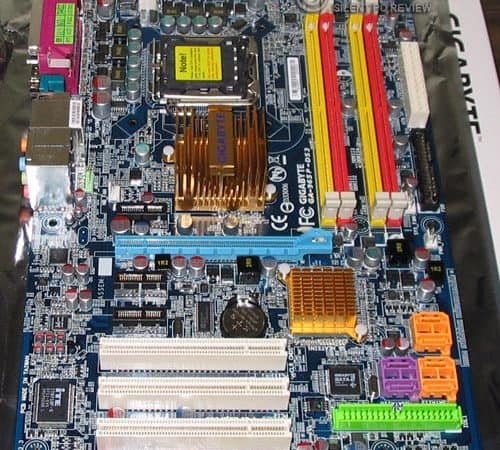 Gigabyte has a long history of producing affordable, yet feature-packed motherboards. We examine the Gigabyte GA-965P-DS3, an ATX motherboard designed for Intel Core 2 Duo and Quad processors. The DS3 is now on its third official revision so it’s likely any major quirks or bugs have been worked out. Gigabyte has also provided a steady stream of BIOS updates to fix minor issues and improve overall performance. How suitable is it for the quiet PC enthusiast?

Gigabyte has a long history of producing affordable, yet
feature-packed motherboards.  Their offerings have won over many enthusiasts in recent years. Their
treatment of Intel’s P965 and P35 chipsets shows they are
taking on the likes of DFI and Abit for your hard-earned dollar.
(Editor’s note: Gigabyte relies almost solely on retail sales to the DIY market, unlike many other brands who do lots of OEM/ODM business. So it’s no surprise that Gigabyte is working hard in this market!)

Today we examine the Gigabyte GA-965P-DS3, an ATX motherboard
designed for Intel Core 2 Duo and Quad
processors.  After several tries, the DS3 is now on
its third
official revision so it’s likely any major quirks or bugs have
been worked out.  Gigabyte has also provided a steady stream
of
BIOS updates to fix minor issues and improve overall performance.

The DS3 supports all current Intel Core 2 Duo and Quad CPUs.  It
does not support Intel’s upcoming 45nm
processors (code name Penryn) as of yet. Rival Asus revealed that
their P965-based P5B line will support Penryn with a BIOS update, so
it’s quite possible that other manufacturers can/will follow suit.

P965 is a chipset targeted at the mainstream market with boards
priced at anywhere between $80 and $200 depending on the brand
and feature set. The
DS3 utilizes the Intel ICH8 southbridge — it’s a budget solution
as it does not
offer any RAID functionality.  To supplement
this, Gigabyte added
their own controller for an extra pair of SATA ports (for a total of 6) with
support for RAID 0, 1, JBOD, as well as an IDE channel, which is useful as Intel has
abandoned IDE altogether.  The DS3 also features gigabit ethernet
and high definition 8-channel audio, but Crossfire and Firewire
are absent, as can
be expected for a product in its price range.  Another point of
interest: The board’s listed dimensions indicates it is narrower
than the majority of ATX boards by more than an inch. 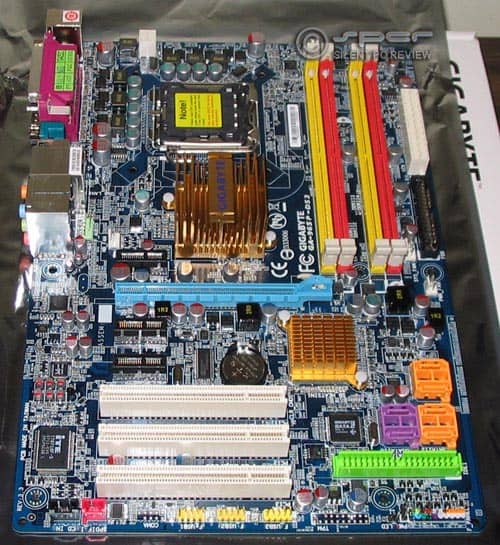 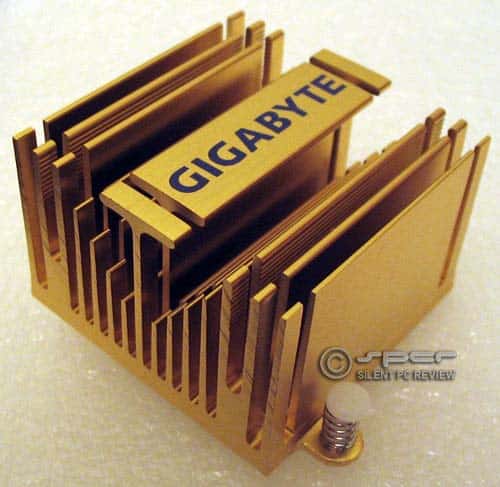 The northbridge heatsink is not
particularly large, nor does it stand out in any other way aside from
the color and branding.  The middle row of fins is very wide, like
a series of fat razor blades.  Gigabyte would have done well to
chop this row up into multiple fins, and remove the nameplate
altogether for the sake of better cooling performance. 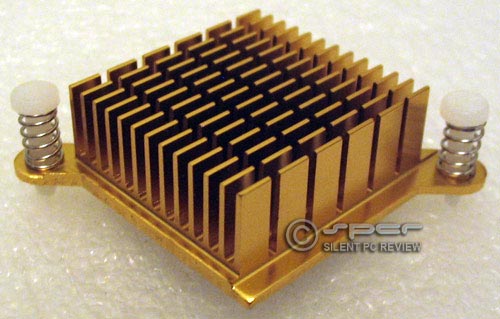 The design of the southbridge heatsink is much more practical with many narrow fins
for increased surface area and airflow. 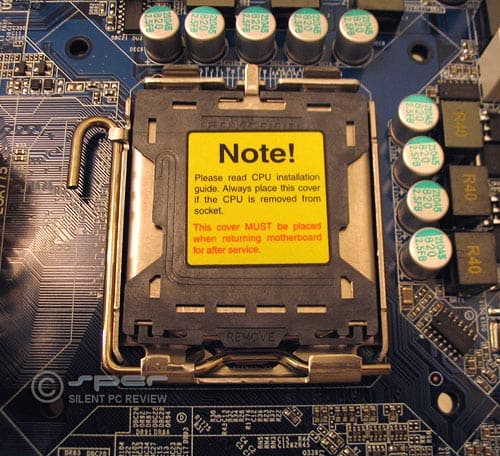 Clearance
around the CPU socket is good, and should
accomodate most third party heatsinks.  However, some Scythe
Ninja
Rev. B owners have reported that the metal rentention mechanism needs
to
be filed down to clear the capacitors around the CPU.  Those
using the Sunbeam Tuniq Tower 120 have discovered they need to
insulate the underside
of the PCB where the metal backplate makes contact with the board, to
prevent a short.  This may apply to other coolers as well. 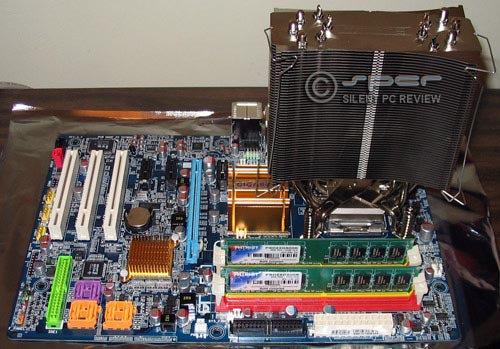 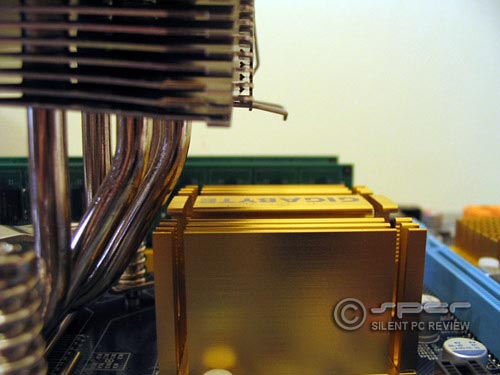 We are also happy to report the Thermalright
Ultra-120 Extreme fits in
the proper east-west orientation, though the heatpipes come within
millimeters of
touching the northbridge heatsink.

Gigabyte packs very few accessories with the DS3: Four
orange
SATA data cables, navy
blue 80-wire IDE and floppy data cables, dual-head
SATA power adapter, I/O shield, manual, and driver/utility CD.
Sparse, but acceptable.  The SATA data
cables were a pleasant surprise as they were of the locking variety, reducing the chance of accidental disloding.  SATA
connectors are notoriously flimsy, so this is a welcome addition.
There’s something comforting about hearing a nice solid
click when you plug in the cable. 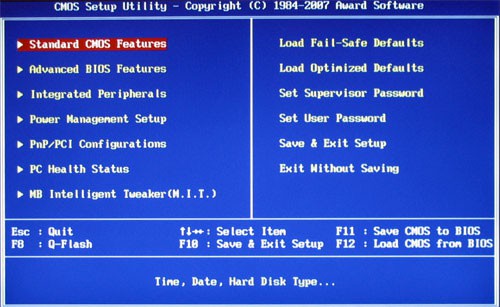 The PC Health Status menu was somewhat of a surprise.  There were
no actual voltage readings here, just a simple “OK,” if it
was within normal levels (we assume).  Gigabyte’s EasyTune
utility report vCore, +3.3V, and +12V but not +5V.  Speedfan
displays +5V but not +12V. 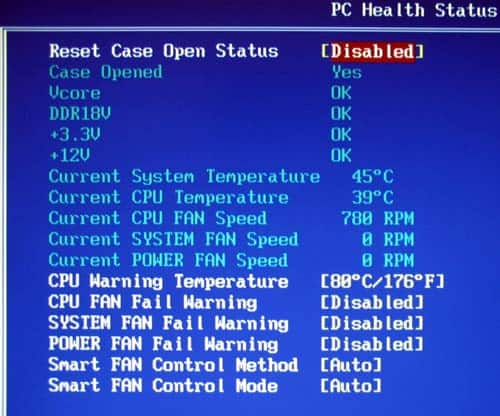 The Smart Fan Control Method
toggles for use with a 3-pin or 4-pin fan, while
Smart Control Mode allows you to select
either straight voltage or PWM control.  Leaving both
settings at
“AUTO” seemed to work fine in either case.  Only the two
4-pin headers were controllable; the 3-pin headers ran at full
speed.  There is no customizable fan control in the BIOS, but you
can use EasyTune or Speedfan in Windows. Normally
Speedfan would be a no-brainer here, but strangely, it does not report
RPMs accurately, unless our CPU fan really was running in the 6-digits.
Hopefully this will be fixed in a future version. 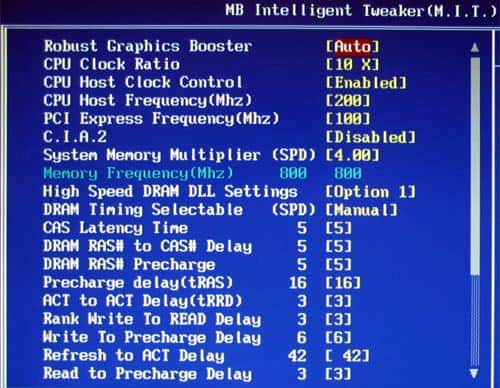 The MB Intelligent Tweaker menu is where most of
the action happens.  Many of these settings are actually not
visible by default (including all the memory timings).  In
the main menu, users must press CTRL + F1 to unlock more advanced
menus and intricate
settings.  We presume Gigabyte does this to prevent
novice users
from accidentally changing an advanced setting that could result in a
dead motherboard.  However,
they leave access to CPU frequency and various voltages open by
default, making this precautionary “feature” ineffective for bumbling neophytes, while annoying for more advanced users.  The range of frequency
selection
is wide.  CPU frequency can be changed from 100-700Mhz in
1Mhz intervals, PCI Express frequency from 90-150Mhz in 1Mhz intervals,
and
flexible memory multipliers of 2.00, 2.50, 2.66, 3.00, 3.33, and 4.00
are
available. 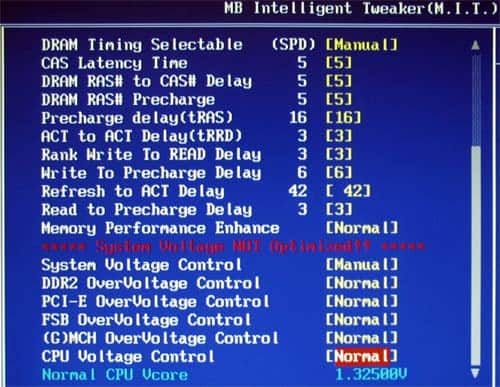 Overclocking is generally not a major issue at SPCR, but since modern
CPUs are becoming increasingly power efficient, it’s quite
feasible to overclock a fairly quiet system.
The
DS3, with its plethora of BIOS options, is obviously built
with
this in mind.  The board is an
excellent FSB overclocker, topping the sample CPU at +510Mhz with a small voltage
boost to the northbridge.  Extra voltage and cooling did not help
raise this frequency any higher.  With the right cooling and
memory
you should be able to
overclock to the limits of your CPU. Keeping it silent at that
OC speed however is a whole other matter.  As
for underclocking, the minimum multiplier available on Intel processors
is 6.  Combined with the lowest CPU frequency available (100Mhz),
the clock speed can be dropped all the way down to 600Mhz if you
dare… or so desire.

Core 2 processors support Enhanced Intel
SpeedStep Technology
(EIST) which automatically drops the multiplier and CPU voltage to
reduce
power consumption when CPU activity is low.  EIST on the DS3 dropped the multiplier of our
E4400 processor from 10 down to 6 and the core voltage from 1.325V to
approximately 1.200V.  Some guess-work was needed to arrive at this
number since CPU-Z consistantly reported CPU voltage approximately 0.025-0.030V
lower than set in the BIOS, and EasyTune did the same to a lesser degree.  An important note about CPU voltage: If you select a non-default voltage, EIST will no longer lower CPU voltage; if you select a custom voltage, you are stuck with it.

Since 1.20V was not much lower than stock we decided to undervolt the
E4400 manually to see if power consumption could be lowered
further.
At the E4400’s stock speed of 2.0Ghz, 1.03125V was the
lowest voltage in the BIOS we could select
while
keeping the system stable.  We used the default multiplier of 10
during power testing to ensure the largest drop in frequency when EIST
kicked in.

EIST only reduced idle power usage by 3-4W at stock speed and
when overclocked.  With EIST enabled and the CPU
undervolted, the voltage did not change, but the multiplier
dropped
to 6 when idle, resulting in a clock speed of 1.2Ghz.  Even with
this 800Mhz drop in core speed, there were no
measurable energy savings.  It seems voltage is key when it
comes to C2D power
consumption.

With an overclocked E4400 and a Geforce 7950GT
video card, idle power was just above 100W.  Underclocking the
video card when idle saved an additional 5W, making this
a formidable gaming setup for under 100W idle.

At the opposite
end
of the spectrum, at stock speed, undervolted, with the low
power Radeon X300, power consumption dipped to almost 70W idle
and less than 100W on load.

The test setup included two hard
drives and two optical drives as we wanted to duplicate a standard
ATX system. Unplugging one hard drive and one optical drive lowered power consumption by an another 14W, for 58W idle. S3 Standby came in at 9W while 8W was drawn during hibernation and also when the system was powered down.

Using the DS3 was an overall enjoyable
experience. It was rock solid stable no matter what we threw at
it despite the flawed northbridge cooler and the lack of VRM cooling.  So who should buy this motherboard?  Unless you
want dual video cards for Crossfire/SLI or a large software RAID array
(which is of dubious value), pretty much anyone. Whether you want superb overclocking,
flexible underclocking/undervolting,
customizable fan
control (through EasyTune/Speedfan), or just plain stability, there’s
very little this board can’t
do.  The Gigabyte
GA-965P-DS3 Rev. 3.3 earns a blanket recommendation for
mainstream users and enthusiasts alike. And
while
it is a product that is getting somewhat long in the tooth by today’s absurdly accelerated lifecycle for motherboards, it
still offers surprising  value; few if any ATX boards
in its price
range can claim to offer more functionality.

After the testing, I decided to upgrade the cooling on the
chipsets with Thermalright HR-05 and HR-05-SL tower coolers, creating a small aluminum condominium park if you will.
It was purely a peace of mind move; since I had no really no good way of measuring the temperature of either chip, it’s difficult to say whether the improved cooling was worthwhile. The mounting holes on the southbridge were too close together for
the  HR-05-SLI, so thermal adhesive was used. Oops, there goes the warranty. 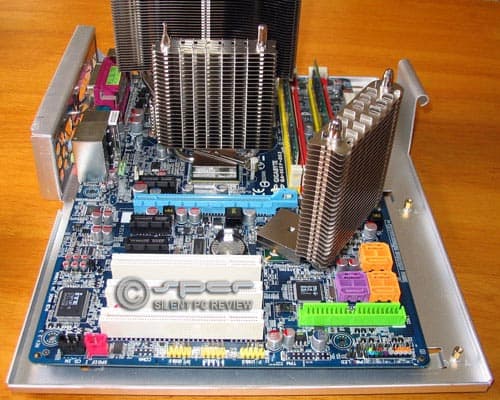 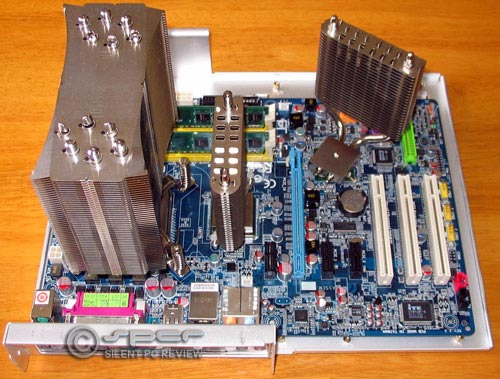 Our thanks to Gigabyte for this motherboard sample.

The author’s "reader reviews" in the SPCR forums:

Discuss this review in the SPCR forums.