A thorough update of an article first published in mid-2001, HS Sandwich Redux discusses a unique, inexpensive DIY hard drive noise damper that also provides effective cooling. I have added refinements and enhancements developed since the original article was written. Some of this content is also discussed in Sandwiches & Suspensions.

This update of an article first accepted for publication by Overclockers.com in mid-2001 discusses a unique, inexpensive DIY hard drive noise damper that also provides effective cooling. I have added refinements and enhancements developed since the original article was written; these
appear in italics.

Recently,
a new over-clocked 1GHz AMD K7 system raised the noise in my 3-PC networked
home office to an unacceptable level. I spent several weeks researching and
experimenting ways to reduce PC noise. Eventually, I achieved pretty good noise
reduction by dropping the voltage to the fans to 7 volts, applying damping in
the case, installing a modified Enermax power supply and doing other mods to
improve airflow and reduce turbulence.

Then I began hearing the annoying high-pitched whine of the 7200-rpm hard
drive, which had been masked before by fan noise.

How to get rid of the whine? 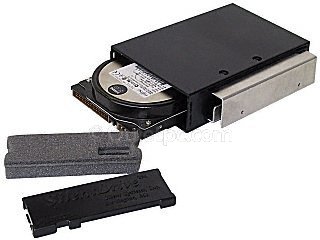 QuietPC’s
SilentDrive is the only commercial solution I found: an acoustically damped,
sealed enclosure for hard drives. It works by absorbing the noise of the HD.
A drawback is that the hard drive heat is basically trapped within the enclosure,
and users are cautioned not to use drives that generate more than 6.8 watts
of heat. (SilentDrive image courtesy of quietpc.com)

The IBM 75GXP 46G drive is safe, as it generates 6.7 watts of heat. This is
the same HD model I use in 2 of my systems. Postings on hardware forums suggested,
however, that many users were less than comfortable with how hot their 7200-rpm
drives were getting in SilentDrive. 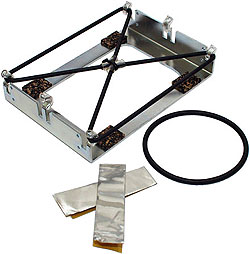 NOTE:
Later, I discovered the NoVibe drive mount by Noise Control, which takes
a very different approach, essentially suspending the HD with rubber O-rings
to decouple vibrations from entering the case and thus cause noise. This product
gave me another idea to try; the details are covered in the article Hard
Drive Silencing: Sandwiches & Suspensions.

The question became: How to get rid of the whine without overheating the drive?

There are HD cooling fans, but these would probably do little to cool a drive
mounted inside a SilentDrive. One consideration was the Vantec Ultimate Hard
Drive Cooler, which uses a kind of heatsink and fans to cool the drive. However,
no noise reduction for the device is claimed, and I really did not want any
more fans.

The solution I eventually came up with is a “noise-sink” that also acts as a heatsink: 2 heavy pieces of aluminum with the hard drive sandwiched in between – thus my moniker for the device. 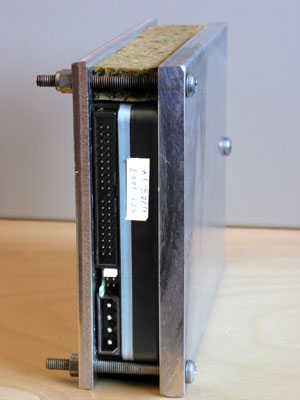 The accompanying pics pretty much tell the story; here are the details:

The drive sandwich assembly rests on the bottom of the case, just behind the
front case fan, which provides additional airflow cooling. A thin piece of foam
that came in a motherboard box is used as a damping “bed”.

The HD Sandwich may be ideal for water-cooled or very quiet systems where the
hard drive is often the loudest component. 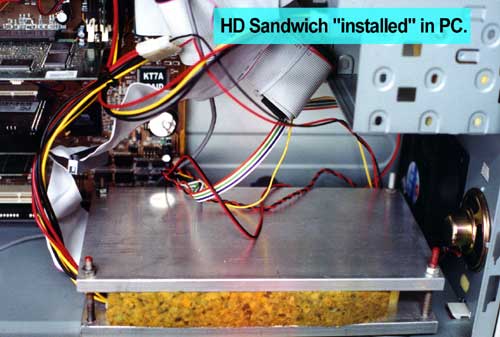 An anechoic chamber with many thousands of dollars’ worth of audio testing
equipment was not available to me. 🙁 So I improvised. A demo copy of SpectraRTA
software and the microphone of a cheap computer headset plugged into my
SB Live! Soundcard were used for noise analysis. The measurement setup was as
follows: 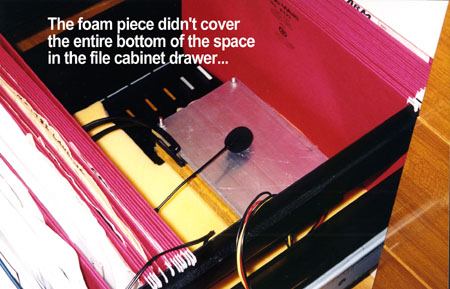 1) I isolated the hard drive acoustically in a filing cabinet drawer
to reduce interfering noise from other sources. A thick piece of foam in the
bottom of the drawer helped reduce reflections. The mic was placed directly
on the top center of the drive. A lengthened IDE power cable from a PC allowed
the drive to idle. No IDE data cable was used, as the distance to the computer
was far too long.

2) Three sets of measurements were made:

The results can be seen in the accompanying images. There is hardly any noise
reduction in the lower frequencies. Between 400 Hz and 1.6 KHz, the average noise
reduction is well over 10 dB, which is very significant, with peaks of 15 dB or
more. Human hearing interprets 10 dB to be twice (or half) as loud. Between about
1.6 KHz and 4-5KHz, the noise reduction is more modest, averaging about 6-9 dB. 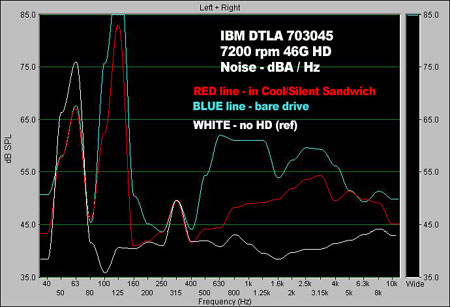 Other aspects of the noise measurements:

Subjectively, with the HD sandwich idling outside the case, it is possible to
hear a trace of the “whine” when I bring my head within 3 feet. There is audible
noise with seek and write operations. When the HD assembly is in the closed case,
if the fans are all turned off, the HD is barely audible.

When the system is operated normally, any trace of hard drive noise (including
seek) is completely masked by the quiet “shhhhhh” of the fans. (NOTE: You may
not get the same results. For example, if your other components make less noise
or if your case is less insulated, you may hear the sandwiched hard drive.) 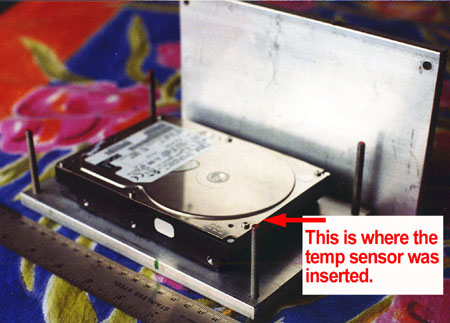 A Veriteq 1000 data
logger with an accuracy of ±0.1°C was used for temperature measurements.
I used an external “raw” 100K thermal sensor about the size of a flea, insulated
the leads and stuck it in the top front corner of the HD, in a tiny cavity just
beneath the top metal cover: 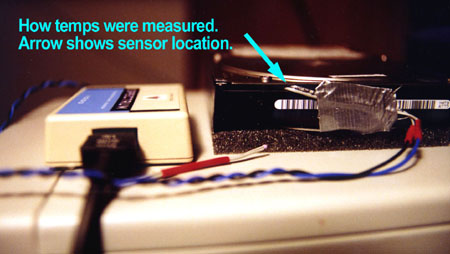 It was the only place on the top, closest to the platters, where I could place
the thermistor with the metal sandwich on. 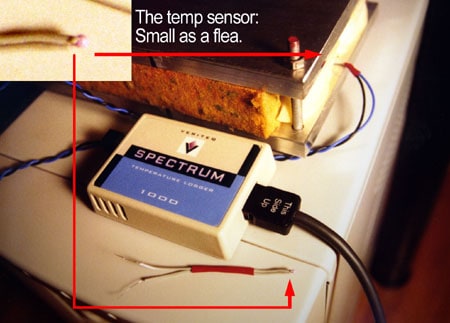 The data logger was set to read once a minute – every 60 seconds, it turns
on, records the temperature, then turns off. The HD was placed on top of the
PC case (for convenience). Measurements were taken as follows:

1) I ran Sisoft Sandra’s HD burn-in utility for an hour with the bare
drive, and then downloaded the data into the Spectrum program that comes with
the data logger. Spectrum allows the data from loggers to be output as graphs or in numeric form.

2) This was repeated with the drive sandwich on. The starting temperature
of the drive with the sandwich was 10°C higher, as I was too impatient to wait
for the drive to cool down. But the temp still stayed 7°C lower after an hour!

The results can be seen in the accompanying chart. You can see how much slower
the temp rises with the sandwich – the temperature gain for the whole hour is
just 5°C (9°F), from 33°C to 38°C. This compares favorably to a whopping 22°C
(39.6°F) rise in one hour without the sandwich. If the second test started with
the sandwiched HD at 23°C like the bare HD, at the 5°C/hr rate, it would have
taken 3 hours to reach 38°C! Would this really happen?

Intrigued, I ran Sisoft Sandra burn-in again with the sandwiched HD, this
time with the starting temperature at 22°C. This chart is also shown: it took
exactly 2 hours to reach 38°C. However, during the next hour, the temperature
only rose 1.5°C! You can see how the slope of the curve becomes flatter and
flatter over time, which suggests the reaching of equilibrium. In other words,
the Sandra HD burn-in can’t heat the drive much more. 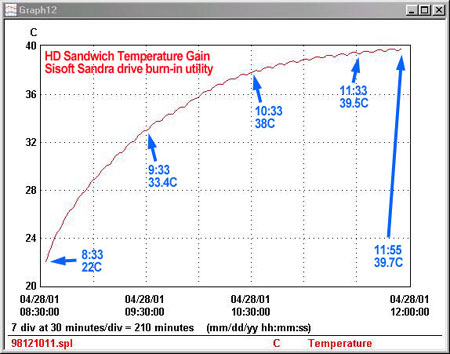 At
3.5 hours, when I decided my hard drive had taken enough of a beating and stopped
the burn-in, the temperature was still just 39.7C. At this rate, it might have
taken another hour or two to hit 40°C. Practically speaking, it had reached
thermal equilibrium.

Although this data is not included because of its unwieldy size, I also logged
temps over a 24 hr period with the drive mounted normally in the computer, then
again for 24 hrs with the sandwich on and the drive placed in the case (as described
earlier). With the sandwich on, the temp rarely exceed 30-32°C, and reached
a peak of 38°C during the 24 hours. With the drive mounted normally, the average
temp was 39-42°C, and hit peaks of 46°C at times. (Generally, MBM5 shows my
case temp to be 30°C or lower.)

Many hardware websites praise fan-equipped hard drive coolers for achieving
just a couple of degrees of cooling. In this context, the HD sandwich’s cooling
is pretty amazing especially as cooling is not even its main function.

Further Clarifications on Use 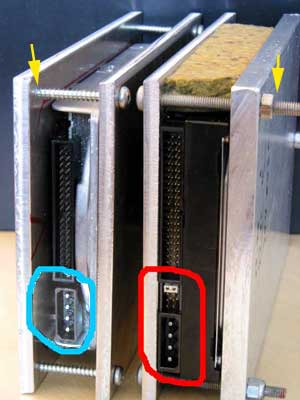 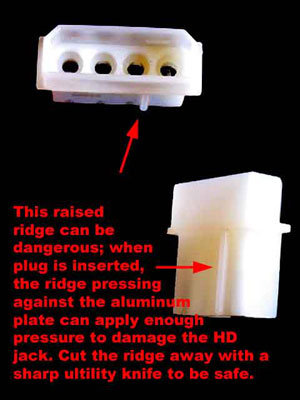 The potential problem exists only with drives that have the IDE connector
positioned flush against the bottom of the drive. The photo below shows an
older Maxtor drive which has quite a larg gap between the IDE jack and its
bottom. The modern Seagate Barracuda IV on the right has no gap. Most modern
drive IDE jacks appear to be positioned like the Barracuda’s.

Several aspects of the way the HD Sandwich works became clearer to me as
I continued experimenting: 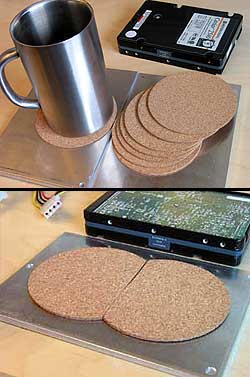 Recent
experience with suspending the HD in elastic showed very clearly the noise-reduction
power of decoupling. That and discussions about cork on the Yahoo! Silent-PC
Group made me seek out these idle cork coasters in a junk drawer in the kitchen.
Two of their number were lost to the cause of drive silence: they were put to
work as a damping layer between the bottom aluminum plate and the upside down
drive. A bit of glue keeps them in place.

It does decrease the noise somewhat, compared to a sandwich with no cork. I have not
measured the difference. If a sandwiched drive is already inaudible in your
PC, there’s no point. If you’re builidng one from scratch or still need more
drive noise reduction, the cork addition is probably worthwhile.