The Havik 140 is a single tower cooler with a Prolimatech/Noctua style mounting system and a pair of interesting 14 cm fans attached using rubber isolators. NZXT’s first heatsink has all the ingredients for success.

NZXT is best known for their plethora of well-designed ATX/EATX towers cases, but they also carry cooling accessories including fan controllers or fans. Today marks an expansion of this lineup with the release of their first CPU cooler, the Havik 140. It’s a rather tough market to break into given the level of competition involved, but if NZXT attacks it with the same tenacity they did with PC cases, we would be hesitant to bet against them.

The Havik 140 is a single tower cooler, nickel-plated from head to toe, much like Thermalright’s Ultra/Venomous series and countless other established CPU heatsinks. What is unusual is that it ships with dual 14 cm fans. Traditionally coolers of its size would be equipped with 12 cm models so this might be overkill. The only other heatsinks we’ve encountered that include a pair of 14 cm fans are the dual tower Prolimatech Genesis and Thermalright Silver Arrow, and the down-blowing Noctua NH-C14, all three of which are larger and heavier. Furthermore, both the Silver Arrow and NH-C14 can be purchased for close to the Havik 140’s MSRP of US$75.

The Havik 140 ships in a neatly arranged package with cushioned layers of styrofoam protecting the heatsink and stock fans. A simple white box holds the accessories which includes all the necessary mounting hardware, a tube of thermal compound, a 3-pin Y fan cable, and an instruction sheet in various languages. The fans are rather interesting as they have unusual frames and twisted fan blades.

The NZXT Havik 140 is composed of a copper base soldered to 6 x 6 mm thick copper heatpipes and 46 aluminum fins, and the entire body is nickel-plated. By our measurements, the heatsink weighs approximately 730 grams (1040 grams with the stock fans installed) and stands 160 mm tall (166 mm with a fan installed).

The most critical aspect of installation is that the heatsink be securely
mounted. A firm mating results in good contact between the heatsink’s base and
the CPU heatspreader and more efficient heat conduction. Ideally it should
also be a simple procedure with the user having to handle as few pieces of
hardware as possible. 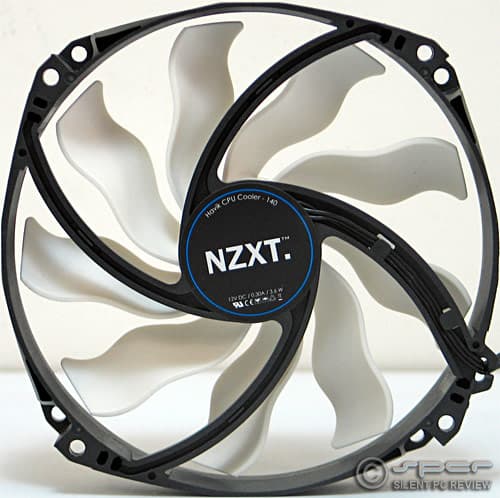 The fans included with the Havik 140 are sleeve bearing models with nine thin, twisted blades, and a short 15 cm 3-pin cable. A 15 cm Y cable is included to plug both fans into the same header, though we would probably recommend against powering it via a motherboard header if its 3.6W power rating is accurate. The struts holding the motor in place are curved but in a manner that makes them almost parallel with the trailing edges of the fan blades. To lessen the probability of turbulence and tonality, they should be curved in the opposite direction.

The acoustics of the stock fan are excellent, similar to our reference Noctua NF-P14 fan. It is whiny at 12V and turbulent at 9V~10V but both these effects lessen as the fan speed is decreased. More importantly, it is smooth throughout most of its range, and becomes quiet at a relatively high level, 8V / 940 RPM.

The stock fans don’t sound nearly as good in tandem however. When both are placed on the Havik 140, the noise signature acquires an odd pulsing type sound audible at 7V and above. This may be caused by intermodulation which is odd because the speeds of the two fan samples were very close, within 30~40 RPM of one another. The odd shape of the fins could also play a part in this.

The Havik 140 was an excellent performer, maintaining a thermal rise above ambient of 36°C at 12V and suffering only a 5°C degradation at 5V. Its cooling ability was about 3°C worse using just a one fan. In a single fan configuration, our reference Noctua fan was slightly better at 8V~9V, but at the 6V/13 dBA level, the stock fan proved superior by 3°C. It’s also notable that at 7V~12V, the measured noise level with one reference fan was 1~2 dB lower than normal, so the rubber isolators appear to work as advertised.

It seems that the odd acoustic effect we encountered when pairing up the stock fans resulted in higher measurable noise as well. Our reference fan produced noise levels very close to that of the stock fan, but when paired up, the SPL increase in the 7V~12V range was 2~4 dB compared to 4~5 dB for the stock fans. As a result two Noctuas were quieter at the same voltage levels, while generating similar temperatures.

In a reference fan showdown with the top-end dual fan heatsinks, the Havik 140 unfortunately falls just a little short. Given its smaller size, it just doesn’t have enough surface area to contend with the more monstrously sized coolers from Prolimatech, Noctua and Thermalright. It does however tie with the venerable Thermalright Venomous X, quite an accomplishment for NZXT’s first heatsink.

NZXT’s first foray into the CPU cooling market is a success as the Havik 140 fell just short the elite status awarded to much larger coolers like the Noctua NH-D14/NH-C14, Thermalright Silver Arrow, and Prolimatech Genesis. It performs as well as the Thermalright Venomous X which is no small accomplishment. It isn’t anything revolutionary though, quite the opposite in fact as its overall design draws on elements found in the current crop of high-end heatsinks. The heatsink body and secure mounting system are very similar to what Prolimatech and Thermalright have been doing the last couple of years.

The stock fans sound excellent, acoustically equivalent to our reference Noctua NF-P14’s, but only individually. When used as a pair they sound worse and measure higher than the Noctuas, an unfortunate side-effect of either intermodulation and/or the twisted shape of the fan blades. As a result, they can’t deliver thermal performance similar to that of the P14’s without emitting higher noise levels. The odd rubber fan mounts created a small acoustic improvement (only measurable when using a single fan). We were concerned they wouldn’t stand up with prolonged use, but after multiple fan changes, there wasn’t a scratch on them. The only downside we can see is the degree of finesse required squeeze them between the fins if the motherboard is already mounted in the case. In close quarters with limited visibility, metal clips are easier to deal with.

The NZXT Havik 140 has a MSRP of US$75, which is a little high considering more capable coolers like the Thermalright Silver Arrow and Noctua NH-C14 can be found online for a similar amount. If you’re uncomfortable with having such beastly coolers in your system, the Havik 140 is definitely worth consideration though. For the noise conscious, the interaction between the two stock fans is undesirable, but as they sound excellent on their own it might be worthwhile to reuse the second fan in your case if it supports 14 cm models.

Our thanks to NZXT for the Havik 140 heatsink sample.