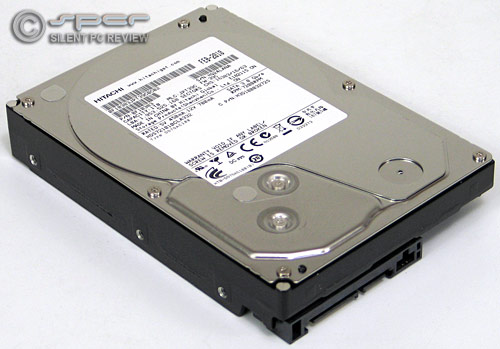 The Hitachi Desktar 7K1000.C and WD Caviar Blue 1TB represent the latest evolution in mainstream 7,200 RPM hard disk drives. While not as fast as high performance 7,200/10,000 RPM models or SSDs, they are fast enough, reasonably quiet, and very affordable.

For most of the last decade, shopping for desktop PC storage options was a relatively simple affair as there weren’t many choices for consumers aside from the typical 7,200 RPM mechanical hard disk drive. Usually it boiled down to capacity, brand, price and availability. While 7,200 RPM drives are a long way from being obsolete, the storage landscape is much more complex than ever before.

There are slower 5400/5900 RPM “green” drives like the WD Caviar Green, Samsung EcoGreen, and Seagate LP series that offer excellent acoustics, superb energy efficiency, and super low prices but slower overall performance. The most expensive and fastest desktop drives on the market are WD’s new generation of 10,000 RPM VelociRaptors. However, even the VelociRaptors can be considered cheap compared to solid state drives (of similar size) that deliver tremendous speed and no measurable noise. Then, there are hybrid drives like the Seagate Momentus XT that combine mechanical and solid-state technology.

With all the innovation in digital storage, it is easy for drives like the Hitachi Deskstar 7K1000.C and WD Caviar Blue 1TB to get lost in the shuffle. They don’t represent anything particularly new or exciting, just the latest evolution in mainstream 7,200 RPM hard drives. They’re not even the best in their class, not offering as much capacity or speed as high performance 7,200 RPM models like WD Caviar Black or Seagate Barracuda XT. However, they are more affordable and shouldn’t sacrifice as much performance as “green” drives… while hopefully maintaining reasonable noise levels.

Hitachi’s Deskstar 7K1000.C 1TB is one of the cheapest 7,200 RPM drives on the market, retailing for US$55~$60. As the model number implies, this is the third generation of the 7K1000 series, with the main difference between them being areal density/platter size. The 1TB variant features just two 500GB platters and 32MB of cache. Like previous Hitachi drives, the casing is minimal with less structural support for the area around the motor.

The Caviar Blue series sites between Western Digital’s energy efficient Caviar Greens and high performance Caviar Blacks. We expect the acoustics, power consumption, and performance of the WD10EALS to fall somewhere in-between the two. It has 32MB cache, and though the number of disks/heads are not detailed in WD’s literature, we have reason to believe this sample, like the Hitachi 7K1000.C, is also a two platter variant. The Caviar Blue 1TB is priced slightly higher than the Deskstar 7K1000.C at US$60~$65.

Our samples were tested according to our standard
hard drive testing methodology. As of mid-2008, we have been conducting most acoustics tests in our own 10~11 dBA anechoic chamber, which results in more accurate, low SPL readings than before, especially with <20 dBA@1m SPL. Our methodology focuses specifically on
noise, and great effort is taken to ensure it is comprehensively measured
and described. Performance is covered only lightly, for reasons discussed in detail in the methodology article.

Ambient conditions at time of testing were 10.5 dBA and 22°C.

A Windows 7 image loaded with our test suite was cloned to a 50GB partition
at the beginning of each drive and our entire
test suite was run start to finish 3 times with a reboot and defragmentation
in between runs except for SSDs and the Momentus
XT (defragmentation resets optimizations made to the XT’s flash memory).
Average times were collected for comparison.

The Caviar Blue had better loading times than the Deskstar, booting up eight seconds faster and edging it out by 1.6 seconds loading up a level of Call of Duty: World at War. Overall, it also bested the performance of hard drives like the 2TB Caviar Black and Barracuda XT.

Application performance was closer between the two drives, with the Caviar Blue finishing our ExactFile test seven seconds faster, but the Deskstar squeeked past it by four seconds in TrueCrypt. Overall, they were competitive with the Barracuda XT, but a big step behind the fastest WD drives, the Caviar Black and 600GB VelociRaptor.

The Hitachi also bested the Caviar Blue in timed installs of PowerDVD and 3DMark06. Though the margins between the 10 drives compared above were small, the Caviar Blue ended up with the poorest result.

To gauge the overall performance of the drives, we assigned a top score of 25 to the top performer in each benchmarks series (loading, application, copying, and installation) and the rest proportionally, giving each benchmark series an equal weighting. The OCZ Vertex 2 was the fastest in all tests, resulting in a perfect score of 100.

Though close in overall performance, the Deskstar outperformed the Caviar Blue by a larger margin in the tests it won, giving it a slim victory. The two drives seem to just a step below the Barracuda XT 2TB, but slightly faster than WD’s old 300GB VelociRaptor.

While not entirely indicative of real world performance, HD Tune does give us a glimpse into a hard drive’s inner workings. Its transfer rate benchmark measures speed across the entire disk, giving us an idea of how fast it is over its entire span.

HD Tune measured a maximum transfer speed of over 130 MB/s, offering more evidence that our Caviar Blue sample has two 500GB platters just like the Deskstar 7K1000.C. The two drives also performed very closely in our timed tests and are similar in weight as well.

Altering the Automatic Acoustic Management (AAM) setting is a simple way of improving a hard drive’s acoustics. In essence it slows the aggressiveness of the drive’s seeks, whih increases access time and slows performance. For the Deskstar 7K1000.C and Caviar Blue, setting AAM to “quiet” produced a longer access time of 4.1 and 4.7 ms respectively. AAM had no effect on file transfer speeds.

Despite being 7200 RPM models, both Deskstar and Caviar Blue samples were very quiet when idle, rivaling the noise level of “green” drives from Western Digital and Samsung. The Caviar Blue measured 14 dBA@1m, while the Deskstar produced only 13 dBA@1m. Up close, the Western Digital drive sounded a little more ‘hollow’ than the Hitachi. Inside a case with a side panel of reasonable thickness, both drives should be near inaudible at one meter’s distance, at least when they’re idle.

When seeking the Deskstar is quieter once again, but the difference is much greater. The WD measured 20 dBA@1m to the Hitachi’s 17 dBA@1m. The Caviar Blue had more pronounced seeks, sounding like little thumps while the Deskstar’s seeks produced scratching type noises. Using AAM, we managed to lower the Caviar Blue’s noise output by 3~4 dB when seeking, but only got a 1~2 dB improvement out of the Hitachi.

The Deskstar used very little power when idle but a surprisingly high amount when seeking, almost 10W. The Caviar Blue was more average in this regard. While the Hitachi was the quieter drive, the level of vibration was much stronger than that of the Caviar Blue, even surpassing the 2TB Caviar Black. Properly suspended, the Deskstar would be acoustically superior, but if hard-mounted, it would probably cause a more noise.

The Desktar 7K1000.C and Caviar Blue are very quiet compared to other 7,200 RPM drives, but their acoustics only rival “green” drives when idle. Power consumption is a bit on the high side.

The recordings start with 5 to 10 seconds of ambient noise, then 10 second
segments of the drive in the following states: idle, seek with AAM enabled (if
applicable), and seek with AAM disabled.

The Hitachi Deskstar 7K1000.C and WD Caviar Blue are the quietest 7200 RPM drives we’ve tested when idle. When seeking, the Deskstar’s noise output is fairly low, while the Caviar Blue is more or less average. However, our sample Hitachi generates a great deal of vibration that makes it unsuitable noise-wise unless you utilize a hard drive suspension system. This hard-mounted Deskstar will shake the hard drive cage and the rest of the case and likely cause resonance effects that are far more undesirable than the noise emitted by the drive alone. Without suspension, the Caviar Blue is the better choice.

If speed is a priority, the Deskstar seems to be slightly faster overall than the Caviar Blue, barely edging it out in our tests. Neither drive can compare to a WD’s Caviar Black or latest VelociRaptors, but they perform better than the 5400/5900 RPM “green” drives currently on the market. They are not as energy efficient, but that shouldn’t be a deciding factor unless you plan on deploying a large number of drives. Between the two, the Caviar Blue uses a bit more power than the Deskstar when idle, but less when seeking.

If your system requires 500GB+ of fast but quiet storage, the best configuration would be a SSD large enough to fit your operating system and commonly used applications and a “green” drive for storing the rest of your data. SSDs of course produce no measurable noise and the acoustics of “green” hard drives simply can’t be beat. Unfortunately this combination is fairly expensive because the price of solid state storage is still many times that of the magnetic variety. The latest generation of VelociRaptors might be quiet enough for some (if you’re willing to remove the heatsink and void the warranty), but they, too, cost a good chunk of change.

Despite all the changes and product variation in mass storage over the recent years, the Hitachi Deskstar 7K1000.C and WD Caviar Blue 1TB drives prove that the good old 7200 RPM hard drive still has a place in the world. Both drives offer a good mix of capacity, performance, and noise, and best of all they retail for around US$60. The only alternative in the same price range is a larger capacity but slower “green” drive.

Many thanks to Hitachi and Western
Digital for the Deskstar 7K1000.C 1TB and Caviar Blue 1TB
samples.