In Canada: Stealth 100 by Anitec Computers 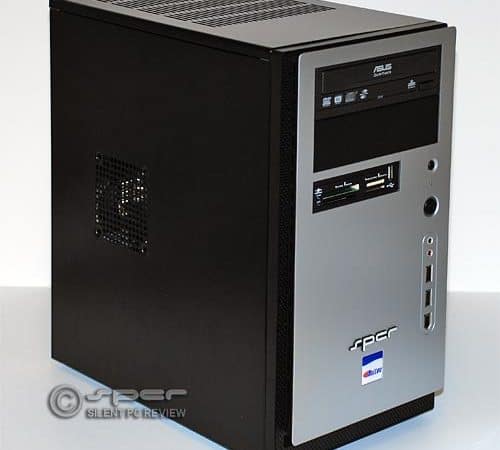 Anitec Computers is the system integrator and vendor of these systems. SPCR has no involvement whatsoever in their sale, distribution or servicing; only the original design and verification of design objectives in the production sample supplied by Anitec. For details of the partnership, please see SPCR Designed Computer Systems.

A compact all-purpose personal computer, the acoustic signature of the SPCR Stealth 100 is very close to or at the ambient noise level of most urban homes. It has been designed so that its acoustic output will remain very low within a wide range of work loads, from idle all the way to maximum load, in a broad range of ambient temperatures. Housed in the sturdy Antec 3480 micro-ATX case, this model is small enough to be easily placed atop a desk behind an LCD monitor or tucked under the desk (the preferred location for lowest noise).

The design goals for SPCR Stealth 100 were: 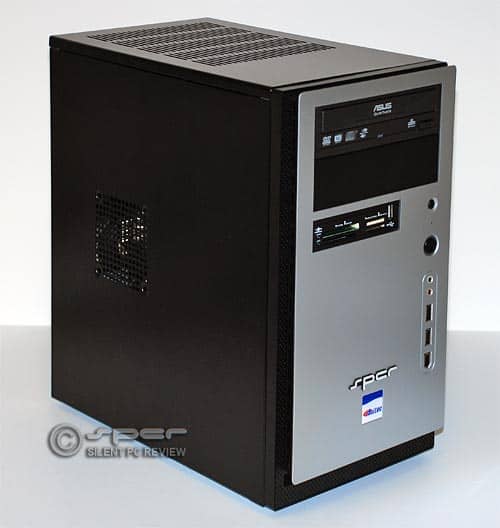 The Antec NSK3480 case features separate dual-chamber design to for improved management of heat and noise. The power supply is housed along with the optical drive in the upper chamber while the lower chamber houses the motherboard and hard drive. The NSK3480 has been reviewed by SPCR, and has been found to be eminently suitable for a quiet PC.

A Corsair VX450 replaces the stock power supply that comes with the case. The VX450 has been thoroughly tested by SPCR; it is a reliable, efficient, and very quiet power supply. The vent design of the Antec 3480 case cools the power supply with air from outside the case, which is always cooler than the air inside the case. This ensures that the thermally controlled fan in the power supply never speeds up unless absolutely neccessary, thus keeping the acoustics constant.

The stock main chamber fan is replaced with a Scythe Slipstream 120mm fan, which has the lowest noise of any fan of similar size at similar speed. A Scythe Ninja Plus without fan is used for CPU cooling. This heatsink has long been a favorite of DIY enthusiasts for its exceptional cooling ability with very little airflow. Here, the back panel fan provides all the necessary cooling.

The base configuration utilizes the excellent integrated graphics of the AMD 690G shipset used in the Asus M2A-VM motherboard. For those who wish to play 3D games, discrete graphics card options with passive cooling are offered by Anitec. The higher powered gaming graphics cards exact a price in noise, raising the noise level about 2 dBA because of the need for a front mounted intake fan. 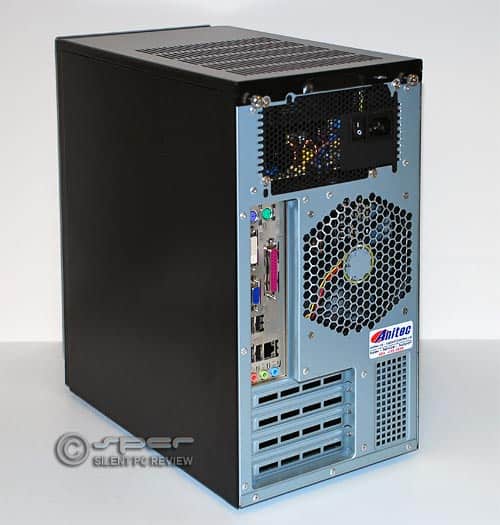 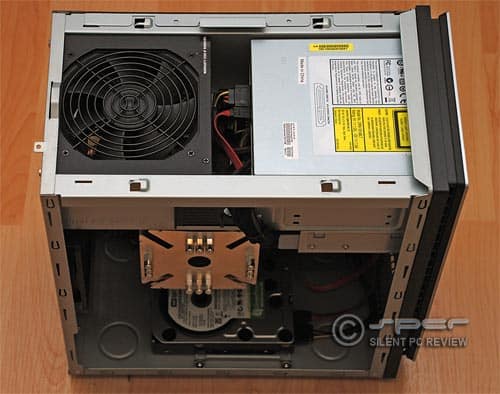 Tests with a Production Sample 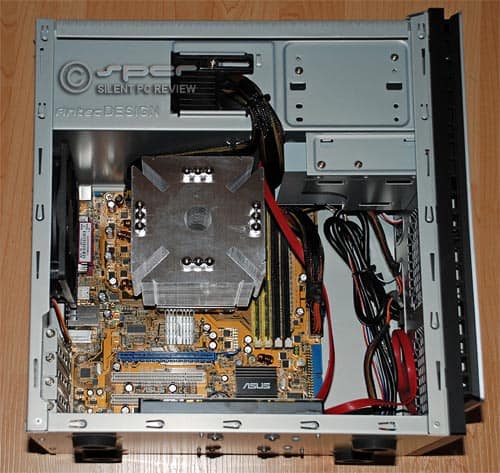 The system came with Windows XP Home installed, with these settings engaged:

Temperature, noise and AC power consumption were measured under various loads in ambient conditions of ~19 dBA and 21°C.

All the temperatures were very low. The measured SPL never changed, and this reflects the subjective experience: The computer always sounds the same. The noise can be described as a soft wooshing. A bit of muted clicking noise is also audible when the hard drive is seeking, which explains the 21~22 dBA SPL in idle — it’s the effect of Windows accessing the drive occasionally. When the computer is placed under the desk as is the norm for most vertical systems, it becomes essentially inaudible (unless your ambient noise level is significantly lower than mine).

Because the speed of the main chamber fan is thermally controlled, a check was made of acoustics at a much higher ambient temperature, to simulate hot summer conditions. A 900W radiant space heater was placed about two feet diagonally in front of the PC and left for nearly an hour with full load testing ongoing. When a thermometer placed at the front of the PC read 33°C, measurements were recorded, as shown below.

Despite the >200 RPM increase in the main fan speed, the overall noise barely increased at all, neither subjectively nor by SPL measurement. Temperatures remained perfectly safe. It wasn’t possible to achieve higher ambient temperature in our lab, but it’s safe to say that in hotter weather, the fan would probably speed up more and the whole system would get louder. For reference sake, Q-Fan was disengaged so that the main case fan would run at full speed, and the load test was run once again.

Although it’s only a 2 dBA measured increase in SPL, it is subjectively significant. The reason is because it’s high enough above the ambient level to become psychoacoustically more noticeable. Still it remains a smooth broadband noise, and except under extreme load during a heat wave, you’re unlikely to encounter this level of noise from the SPCR Stealth 100. Cooling of all components remained excellent.

The SPCR Stealth 100 by Anitec Computers works exactly as intended. It is highly capable and very quiet. 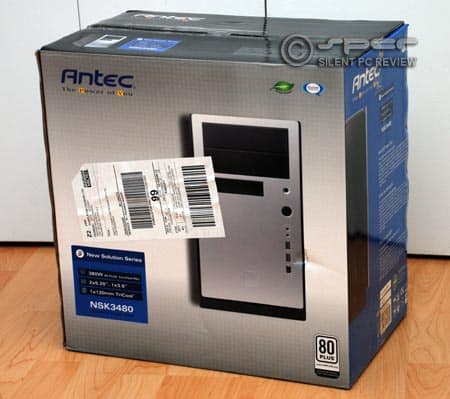 The system came in Antec NSK3480 carton, which Anitec says is sturdy enough for delivery anywhere in Canada. 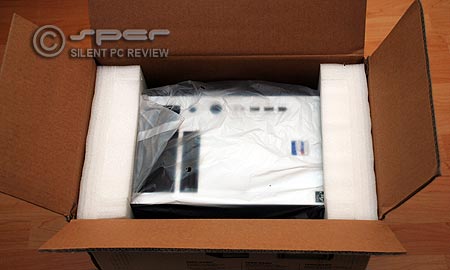 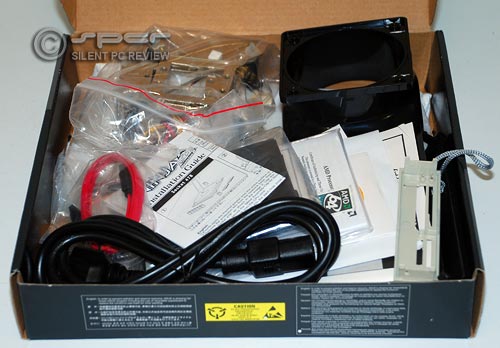 Spare parts, manuals and CD from all the components are provided in the motherboard box.