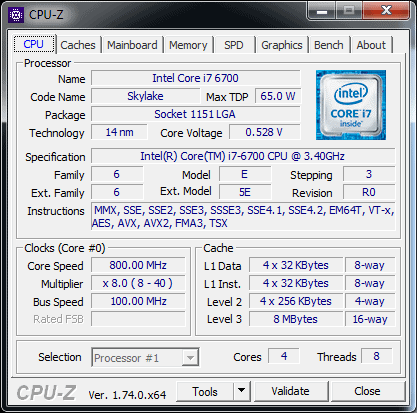 The Core i7-6700 has a TDP of 65W, making it seem like a great choice for a high performance, energy efficient desktop build. Unfortunately, it’s a lot closer to the 91W i7-6700K than the numbers suggest.

In our Skylake review, we determined that Intel’s new flagship Core i7-6700K for mainstream desktops is a tremendous performer but does not offer much in the way of value compared to its Haswell-E predecessors. Not only is the chip itself fairly expensive (currently US$370) compared to the performance it delivers, but as it uses a different socket (LGA1151), a new motherboard is required, and switching to DDR4 memory is recommended for additional future-proofing. There’s a small early adopter premium for each of these, making the price of this new platform higher than the move from Sandy Bridge to Ivy Bridge and Ivy Bridge to Haswell. The i7-6700 (non-K) may be slightly better in this regard as it can be purchased for a US$45 less and its TDP is just 65W compared to the i7-6700K’s 91W, suggesting that the vanilla version of the 6700 is more energy efficient. This is of great interest to us as the less power it consumes, the lower the thermal demands, and the greater potential for quiet operation. It’s also a significant factor for compact builds which can’t offer as much cooling as big towers.

The current crop of quad core Skylake processors on the market are split between Core i5’s and the higher-end Core i7’s with the main difference being support for Hyper-threading and a larger cache. The entire lineup is equipped with the same HD 530 integrated graphics chip with 24 execution units though the lower tier i5’s have lower GPU clock speeds. The i7-6700 plays second fiddle only to the i7-6700K, which boasts higher clock speeds and an unlocked multiplier which explains its higher TDP. The “K” model is also missing some management features like vPro, SIPP, and TXT, none of which are valued by home/enthusiast users, so no big advantage there. Today we’ll try to determine how much of power difference this makes in real life and whether the performance sacrifice is commensurate with the i7-6700’s lower price.

Our main test procedure is a series of CPU (timed tests of real-world applications) benchmarks. System power consumption is measured during the CPU tests (an average of the first 5~15 seconds) and in various states including idle, H.264 and Flash playback and full CPU and GPU load using Prime95/CPUBurn and FurMark.

Certain services and features like Superfetch and System Restore are disabled
to prevent them from affecting our results.
We also make note if energy saving features like Cool’n’Quiet and SpeedStep
do not function properly.

When utilizing integrated graphics, the i7-6700 edges out the “K” edition slightly in power consumption when the system is under light load. The energy savings increase as the workload becomes more demanding. Overall, it’s the most efficient modern 65W+ part we’ve encountered, though keep in mind our Gigabyte Z170X-UD5 test board excels in this area as evidenced by our recent testing of a pair of competing Asus Z170 models.

For our gaming performance benchmark results, see our testing from the i7-6700K review. The i7-6700 is equipped with the same Intel HD Graphics 530 chip and GPU clock speed and none of our GPU tests are CPU-limited, so it performs similarly.

Overall, the HD 530 is about on par most of AMD’s desktop APU graphics solutions and offers approximately 22% improvement over the HD 4600, the integrated graphics provided with most of the higher-end Haswell SKUs.

The bulk of our CPU testing was conducted with a discrete graphics card (a GeForce 9400 GT) to eliminate integrated graphics as a variable, most notably with regards to power consumption. It’s also necessary to fairly compare CPUs that do not have an onboard graphics chip such as AMD FX models.

Given the clock speeds differences between the i7-6700 and the i7-6700K, the results are not surprising. The vanilla 6700 lags behind slightly in all of our tests but draws less power than the “K” model. The A8-7600 was thrown in along with the other competitors despite being a sub-US$100 APU because it’s AMD’s only widely available quad core chip with a 65W TDP. The i7-6700 and i7-5775C are 65W parts as well but they deliver far greater performance and energy efficiency.

We arrived at our overall performance figures by giving each CPU a proportional
score in each real world benchmark with each test having an equal weighting.
The scale has been adjusted so that the i7-6700 is the reference point with
a score of 100.

The performance difference between the 6700K and 6700 is approximately 7%.

Using discrete graphics, Skylake loses some of its power consumption advantage compared to when running on integrated graphics, but it still holds a lead over Haswell.

For users with balanced workloads, we’ve determined what we call the “average power consumption” which assumes the system is used half the time for light load activities (an average of idle and H.264 playback) and the remaining half for heavy load (an average of the power consumption used running our six benchmarks). We believe this is a very common usage pattern for an average PC — they are often left on for long periods of time, doing little to no work.

For users with heavy workloads, the total power consumed while running our benchmark suite is of pertinent interest. The total power takes into account the energy efficiency of each CPU while running our benchmark tests as well as how quickly they complete each task. This simulates the power draw of a machine that is purely for doing work and shuts down when its job is finished.

To determine performance per watt, we took our relative CPU performance figures and divided it by the “average” power consumption calculated earlier and adjusted the scale so the i7-6700 would act again as our standard with 100 points.

When taking both speed and power consumption into consideration, the i7-6700 is a 1%t favorite over the i7-6700K. It’s a slower chip but ultimately a tad more efficient overall.

When considering the cost of a system, the CPU is only part of the equation
as the price of motherboards and RAM must be added to find the true platform price. In the
chart above, we included the prices of the chips compared today (that are still widely available and not obsolete due to EOL), 8GB of RAM (DDR4 for Skylake as it’s more commonly supported), and an average compatible motherboard from Newegg
that fulfill this basic barebones set of criteria:

Since our last CPU review, Skylake prices have gone up while the average LGA1151 motherboard price has lowered as more entry level models have hit the market. Expect to pay somewhere around US$517 for the primary components of a i7-6700 desktop build with DDR4 and US$45 more for the “K” version. The i7-5775C remains a high cost alternative as it’s still difficult to procure and can only run on newer 9-series boards with an updated BIOS. Also note that the i7-4770K is currently overpriced and has been superseded by the higher clocked i7-4790K which offers much higher clock speeds for less money.

To calculate performance per dollar, we divided the relative performance scores by the platform costs and re-scaled it, again with the i7-6700 as our reference point. We don’t have test data on the i7-4790K, but it’s significant enough to place on the chart by approximating its performance.

While the Core i7-6700’s specified TDP is 71% that of the i7-6700K, our sample
failed to deliver substantial power savings. The vanilla model is undoubtedly
more efficient but not by a significant margin. If you’re leaning toward the
non-K variant because of its seemingly lower power requirements, perhaps for
a small/quiet build, the difference is too minor to weigh into the decision.
The same can be said if you’re considering the “K” version for its
higher clock speeds; the level of performance increase is slight. However, the”K”
model does allow for overclocking, both through multiplier and base clock frequency
(BCLK) adjustment. For Skylake, the BCLK can be increased without affecting
other subsystems (PCI-E, SATA) like in the good old days of the Pentium 4 and
Core 2 series, but unfortunately this option seems to be crippled on non-K chips.
Our i7-6700 sample topped out at 102 MHz, a measily 2% overclock; anything higher
resulted in a BIOS/boot failure.

Though we don’t have any numbers for the Core i5 models, if previous generations are any indication, they offer a much better value, as do the older Haswell-E parts due to lower motherboard and memory costs. Some LGA1150 boards are even equipped with combinations of the latest features (USB 3.1, M.2, and SATA Express) commonly found on the new boards but they are offered in fewer quantities. They also more frequently share resources with one another and the PCI-E x16 slots as series-9 chipsets have fewer PCI-E lanes, making it difficult to uses these advancements simultaneously. This is an even bigger problem if you opt to run multiple graphics cards, in which case, Skylake’s additional PCI-E lanes can become vital. As with most new CPU architectures, the most demanding users have better reasons/excuses to upgrade than the rest of us.

Our thanks to Intel for the Intel Core i7-6700 processor sample.

The Intel Core i7-6700 is recommended by SPCR