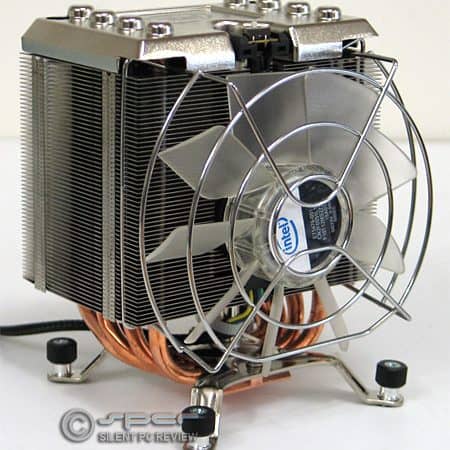 A pair of Intel LGA1366 stock coolers take to the pitch, one a traditional radial down-blowing heatsink, the other surprisingly a tower heatsink complete with 4 heatpipes and a large LED fan. Just how good are these coolers, and do they hold a candle to smaller aftermarket offerings?

The dreaded stock CPU cooler is typically well known for its small size, poor
acoustics and general ineffectiveness. AMD and Intel have three big reasons
for shipping their processors with such lowly heatsinks: to keep costs down,
to ensure compatibility in small cases, and to discourage users from overclocking.
The stock unit is designed only to cool the processor well enough to keep it
stable at stock settings, the bare minimum you could say. Of course this philosophy
gives quiet PC lovers a literal headache and more often than not, they simply
ditch the included stock heatsink on sight without testing its performance or
checking if the noise generated by the fan is bearable. We at SPCR are also
guilty of this behavior, but then one day Intel sent us something that made
us pause: their latest greatest 6-core processor with a stock tower heatsink.

Such an anomaly is this cooler, that it prompted us to actually want to review
a stock cooling unit. While it does not have the refined appearance of most
aftermarket heatsinks, it doesn’t quite fit the mold of a stock cooler either,
not looking at all like a product of the bare minimum philosophy. A six-core
processor obviously needs better cooling than a four-core model but the i7-980X
carries the same 130W TDP rating as its quad-core brothers. The heatsink features
4 copper heatpipes, 57 aluminum fins, a large LED fan, and gasp — screws/backplate
instead of pushpins! The question is whether this new cooler is good enough
to compete with budget aftermarket coolers or whether it is simply another “just
good-enough” stock cooler only in tower form.

A standard Intel stock cooler will provide a good reference point. The bottom-the-rung
model pictured above is the familiar LGA1366 stock cooler that shipped with
the now defunct Core i7-920. This is the same heatsink packed with all current
retail LGA1366 quad core processors, save the “Extreme” line. The
basic design has been in use since the release of LGA775 four years ago: a mass
of aluminum fins splayed out radially and a frameless fan with high angled blades.
With its round shape and low height seems primarily built not to be obtrusive,
though only in the physical sense. Acoustically these coolers have never been
great.

The i7-920 stock cooler fan is subpar acoustically speaking. At full speed
it is loud, very turbulent and buzzy. At 9V, the buzzing disappears but is replaced
by a tonal hum. At 8V the fan sounds bearable as no turbulence is audible at
one meter’s distance, though the humming remains. At 7V the fan is quiet, with
the hum all but subdued, but close-up the fan’s motor starts to click.

The noise level of the i7-980X stock cooler is absolutely ridiculous, being
atrociously loud until the fan is set to below 5V. At full speed it measures
an earsplitting 43 dBA@1m and is tremendously turbulent and whiny. This dissipates
slightly at 9V revealing a very nasty mid-to-high pitched tone. At 7V, the noise
is less tonal, but still far too high. At 5V the fan buzzes and develops a noticeable
drone. It finally becomes quiet at 4.5V, but at this level there is not enough
airflow to mask a very grating, dry-sounding hum. At 4V, the motor is still
audible with the hum deteriorating into a rattle. The built-in speed switch
toggles the fan speed between 12V (‘P’ setting) and 7V (‘Q’ setting).

The i7-920 stock cooler performed very poorly on our test platform. Not only
was the thermal rise high at both 12V and 10V, at 9V, the CPU exceeded 90°C,
a few degrees away from overheating, prompting us to stop the test. Not surprisingly
the i7-920 stock cooler is a complete failure as a quiet heatsink/fan, producing
stable temperatures only with the fan generating more than 20 dBA@1m. Keep in
mind, our test CPU is a i7-965, so the results should be a bit better on lower
speed processors like the i7-920/930.

The i7-980X cooler, for obvious reasons, was a far better performer. At 7V
and above, the thermal rise was very good — it would have been outrageous
if it wasn’t with noise levels well above 30 dBA@1m. At 5V it was 1 dBA quieter
than i7-920 cooler at 12V, but beat it by 9°C. At 5V, there was a massive
drop in SPL, but cooling suffered by only 4°C. At close to inaudible levels,
it attained a thermal rise of 62°C above ambient, something the i7-920 cooler
could not pull off without emitting more than 22 dBA@1m.

Our reference 92 mm fan did not perform as well. Though it was completely superior
in subjective acoustics, its cooling proficiency with this heatsink was worse.
At 12V/16 dBA, the thermal rise was 8°C higher than the stock fan at 4.5V/15
dBA. At 9V, we had to stop testing as the CPU temperature shot through the roof.
Typically our reference fan improves performance on most coolers but in this
case it was at a size disadvantage — the stock fan’s blades are about half
an inch wider than a standard 92 mm fan.

Despite its tightly spaced fins, at low fan speeds the i7-980X is a formidable
cooler, at least compared to smaller aftermarket heatsinks like the Scythe
Samurai ZZ and Ninja Mini. It more or less matches the level of performance
attained by the Ninja Mini paired with our reference 92 mm fan, and beats out
the Samurai ZZ by 10°C at the 15 dBA level, though subjectively, the Scythe
fan sounds smoother. The Samurai ZZ catches up at lower noise levels though,
displaying great staying power by dropping only a couple of degrees at an inaudible
noise level.

There isn’t much to say about the i7-920 stock cooler as it failed to cool
our processor adequately below 20 dBA. Even if it was stable at 70°C above
ambient at 19~20 dBA, it would still be more than 10°C worse than the Samurai
ZZ and almost twice that compared to the i7-980X cooler.

The i7-980X cooler falls well behind the Ninja Mini and Samurai ZZ when paired
with our reference Nexus 92 mm fan. As we noted earlier, the larger wingspan
of the stock fan makes it a much stronger cooler. The Cooler
Master V8, and Scythe Kabuto, the worst tower and downblowing coolers
we’ve tested that utilize 120 mm fans are included in the chart to give you
an idea of how far behind the smaller heatsinks fall.

The Intel Core i7-920 stock heatsink has the ability to run fairly quiet at
lower fan speeds, and with proper PWM control and an enclosure muffling it,
should only be noticed by the most nimble-eared. On load however, it cannot
sustain reasonable temperatures without ramping up to close to full speed. In
our case, we had to stop testing once the fan was undervolted below 10V (21~22
dBA@1m) as the CPU came close to failing due to heat. It performs terribly and
with undesirable levels of noise, making it a fitting example of the “just
good enough” stock cooler.

We were surprised to see how well the Intel Core i7-980X stock heatsink performed.
Sure, it’s a tower heatpipe cooler much larger than the i7-920 heatsink, but
with tightly packed fins and a frameless fan with a big hub, we weren’t expecting
the level of cooling proficiency it displayed. At high fan speeds, it cooled
very well, but howled like a banshee. At low fan speeds it sounded worse than
the average fan, but delivered very good thermal results, more or less matching
the Scythe Ninja Mini at equivalent noise levels. However, given the acoustic
quality of the Intel stock fan, we would say the Ninja Mini is a step ahead.
The i7-980X cooler also put a pretty good beating on the Scythe
Samurai ZZ, holding a 10°C lead over it at the 15 dBA level.

From what we can tell, the 10 cm stock fan is essential to the i7-980X cooler’s
strong performance — it fared significantly worse with our reference 92
mm fan. The stock fan sounds terrible though and is begging to be replaced with
say a 10 cm Scythe Slip Stream. The thumbscrew and backplate mounting system
may also give it an edge as its main competition uses pushpins for installation.
Whatever the reason(s), the fact this stock heatsink is competitive with smaller
aftermarket US$30+ coolers is impressive, though we would be remiss not to point
out that it currently only ships with the Core i7-980X — a close to US$1000
processor! Hopefully Intel plans on improving the fan acoustics and including this cooler with their more
affordable hex-core processors in the future.

Our thanks to Intel
for the stock heatsink samples.