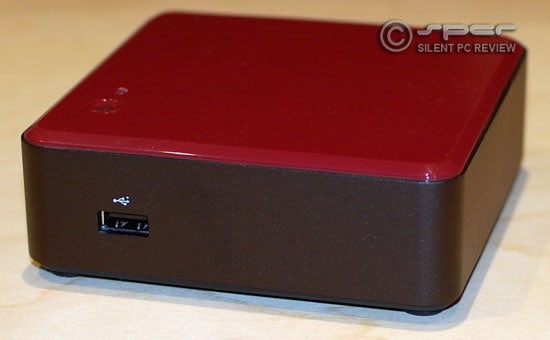 Chip giant Intel’s less-is-more NUC is a cute half-liter box of high efficiency computing goodness that packs in the latest Core processor technology, HD Graphics 4000, mSATA and ThunderBolt. And it is quiet!

Next Unit of Computing is a grand moniker for a tiny computer, even it does
come from Chipzilla. The acronym NUC rolls off the tongue a lot easier than
DC3217BY, though. Intel’s new mini PC was shown at the Intel Developer Forum
in Sept a couple of months ago and is scheduled to be available for purchase
in early December. On the surface, it isn’t anything truly unique, just another
in a long line of small computers running mobile computing hardware, going back
to the Mac Mini and similar AOpen products, and VIA mini PCs before that. But
as in so many computer things, the details matter.

The NUC DC3217BY jams the latest of Intel’s computing goodness in an unusually
small box: A 17W TDP mobile version of the 3rd gen Intel Core i3 processor soldered
on a 4-by-4-inch motherboard and enclosed in a tiny case just big enough to
fit the board with its integral notebook-style cooler, the NUC is, in Intel’s
words, “an ideal engine for digital signage, kiosks, home theater systems,
and intelligent devices for small spaces, or anywhere else you can imagine.”
What it isn’t is as important as what it is: It is not
an Atom, which has always been viewed by enthusiasts with a mix of grudging
respect for its energy efficiency and disdain for its pokey performance, at
least for a desktop PC. A 3rd generation Core is quite simply the most capable
board-embedded processor to come down the PC highway.

There are several noteworthy points about the features:

Intel offers the package as a barebones with case, CPU-embedded motherboard
and PSU. It comes in a small retail box. An AC cord is not provided, presumably
because of the hassles of matching the AC plug for all the various places in
the world where this product will be sold. The AC interface is a 3-plug C6 or
“cloverleaf” connector.

Removing the four external screws allows the bottom panel to be removed. Here’s
the view which greets you.

If available, the latest BIOS is installed prior to testing. Certain services/features
like Indexing, Superfetch, System Restore, and Windows Defender are disabled
to prevent them from causing spikes in CPU/HDD usage. We also make note if energy
saving features like Cool’n’Quiet/SpeedStep or S3 suspend-to-RAM do not function
properly.

Our test is a simple one, determine the overall AC power consumption, noise level, and heat output of the product
at various states. To stress the CPU, we
use either Prime95 (large FFTs setting) or CPUBurn depending on which produces
higher system power consumption. To stress the GPU, we use FurMark, an OpenGL
benchmarking and stability testing utility.

Storage devices and subsystems are also tested briefly using CrystalDiskMark (1000 MB of 0x00 fill test data) and a Kingston HyperX 3K 120GB solid state drive. For USB and eSATA we use an external eSATA/USB 3.0 dock to connect the drive.

The Intel NUC has the distinction of being the quietest fan-cooled mini-computer
we’ve come across. In normal use, it is hard to tell whether the fan is running
until your ear nearly pressed atop the unit. Our highly sensitive acoustic test
system barely registered any rise in the ambient sound level in the anechoic
chamber when the NUC was idling or playing HD video, at 0.6m from the unit.
There was a minor peak around 8~9 kHz, the peak of which barely reached minus
12 dBA. (See the spectrum graph below.) That was the only sign of the fan spinning.

The CPU (Cores 1 & 2) seemed to run hot with the default Automatic settings,
but they’re still comfortably lower than the 105°C maximum T-junction temperature
spec of the i3-3217U. The casing got fairly hot in some spots, but it was never
too hot to touch. SpeedFan is generally preferred for monitoring system sensors,
but this NUC was not properly identified by SpeedFan at time of testing. We
used the feedback report feature in AIDA64
Extreme to obtain a near-immediate update which allowed the software
to correctly identify and monitor the various sensors.

The fan is very smooth and unobtrusive in normal use though a bit hissy and whiny
at top speed. Even with Prime95, an artifically load that’s difficult to match
with real applications, the noise was very modest. Only the graphics torture
test Furmark pushed the fan to obtrusive levels.

Mounted on the back of a monitor, the SPL did not drop by more than a decibel,
but the overall perception of higher frequency noise dropped so that the subjective
impression was of a softer overall sound. This is a benefit only when the system
is being pushed hard enough so that the fan RPM exceeds ~3,000 RPM; below that
it’s quiet enough even just resting under the monitor.

Unlike most mini-systems, the NUC features the Intel Visual BIOS, a modern
UEFI/BIOS with mouse control. Never mind that most of the options enthusiasts
expect for CPU clock and voltage adjusments are missing; there is a fan control
section, and it does offer some options.

The Automatic fan control mode is nice, but to be honest, there was no point
fiddling with it much. At the default BIOS setting — Auto | 78°C
minimum | 20% minimum duty cycle | 8% duty cycle increment —
the acoustics were excellent, and the cooling good enough, despite the relatively
high CPU core temperatures.

In terms of power consumption, the Intel NUC improves on all the mini computers
that came before, except Atom-based Thin-ITX systems. The idle power is lower
than any previous tested system, and H.264 playback power draw is among the
lowest.

As the comparison charts below indicate, the Intel NUC outperforms all previously
reviewed mini-computers by substantial margins in every category. While not
quite up to the performance of a Sandybridge i3-2100 clocked 58% faster, it
is far closer to the kind of performance expected of a modern desktop system.

As the graphics engine is essentially the same as the HD Graphics 4000 in desktop
chips, we refer you to the GPU benchmarks in our Intel
Core i7-3770 Ivy Bridge CPU review. Its 3D performance is on par with the
Radeon HD 6550 in the previous gen AMD A8-3850, but still lags behand the HD
7650D and 7660D of the latest FM2 socket chips from AMD. This GPU is good enough
for causual online gaming, but it isn’t a great experience in most modern gaming
titles except at lower resolution and detail settings. Video playback is smooth
on 1080p content including H.264 MKV/MOV and Flash (YouTube HD).

The mSATA Intel 525 180GB SSD supplied for the review is a new 6 GB/s model
based on a SandForce chip, and not detailed at Intel’s site. The essence of
the single page product sheet supplied with the review sample is shown below.
The Intel SSD Toolbox v3.1.1 confirmed basic data about the SSD and that the
firmware is up to date.

The native USB 2.0 controller is typical. A SandForce SSD (Kingston
HyperX 3K 120GB) was used with CrystalDiskMark to check the performance.

It would have been interesting to check out Thunderbolt performance but we
have no ThunderBolt devices in the lab at this point. We’ll accept the claim
that a single Thunderbolt port supports hubs as well as a daisy chain of up
to six Thunderbolt devices, with 10 Gbit/s per device of peak bandwidth in either
direction. That exceeds the capability of any storage device we have on hand,
however, and calls for something like a RAID 0 combination of perhaps a half
dozen high speed SSDs. So testing Thunderbolt performance limits is a futile
task for us at this point, but you can be assured that if you opt for a ThunderBolt
equipped external SSD or HDD, it will perform as if it was connected internally
to a SATA3 port. A good USB 3.0 implementation can also offer similar performance,
though, at lower cost than ThunderBolt.

The Intel Centrino Advanced-N 6235 PCIe Half Mini Card supplied for the review
deserves a mention. This 802.11 a/b/g/n wireless ethernet card can be found
online for just over $20. In this NUC, it is the only practical access point
to your home or business network and the internet. On our 802.11c network provides
up to 300 Mbps in theory, but we rarely see such speeds. In the NUC, perhaps
in conjunction with the antenna built into the chassis, the card provided consistently
high speeds of >140Mbps over 30′ and a wall or floor distance from the router.

Intel has delivered a surprisingly attractive gadget in its Next Unit of Computing
mini PC. Despite its exceedingly small size, performance is head and shoulders
above all other mini computers we’ve reviewed over the years, regardless of
CPU origin. It is most definitely not an Atom. This is due partly to the superior
performance of the 3rd generation Core chip at its heart, and the much improved
integrated Intel HD Graphics 4000 does its part. The high performance mini-PCIe
mSATA 6 GB/s Intel 525 SSD cannot be ignored, either: Its small size is partly
responsible for the tiny NUC package, while its speed helps overall performance
approach that of full fledged desktop PCs. The power usage in idle is a new
low, and with nominal loads, it merely sips at power, much like a modern laptop.
It wasn’t often that we could push AC power past 20W. Finally, the icing on
the cake is amazingly quiet performance straight out of the box. In normal usage,
the acoustics of the NUC are so unobtrusive that only the most obsessive silence
fanatic would want to tinker with the BIOS fan controls, which surprisingly,
are there to be tinkered with.

The absence of USB 3.0 seems a shame, especially when you consider that the
real-world difference between that and ThunderBolt external storage devices
is not going to be much of a factor. The alternate NUC model, with two HDMI
ports and a gigabit ethernet port may be preferred by many users, given the
relative dirth and high pricing of current ThunderBolt solutions. Pricing of
the NUC seems a bit high, but hopefully, some new competition from other likely
quarters like Zotac, Asus or Sapphire will help in the near future. A not quite
as small mini-ITX package consisting of an Intel DQ77KB board, Asaka Euler fanless
case with 120W brick, and a 35W Pentium G645T dual-core Sandy Bridge running
at 2.5GHz would cost about the same, probably perform faster and offer a broader,
deeper range of 2.5″ SATA SSD, memory and onboard I/O options (including
gigabit LAN). But such a combo will not challenge the energy efficiency of the
NUC in any way, and it will be at least double the size.

The Intel NUC is a bit reminiscent Apple’s Mac Mini when it first appeared
in 2005. Measuring 6.5″ square and just 2″ tall, the 1.5 liter Mac
Mini — 3X bigger than the Intel NUC! — still managed to sport an optical
drive and was a powerhouse for its size at the time. It was stylish, like the
NUC, and it was considered a bit overpriced as well. The big difference is that
the Mac Mini was sold as a complete system, not as a barebones PC. While enthusiast
DIYers will certainly represent the first wave of buyers, it is easy to foresee
system integrators rushing to offer complete NUC systems to end users, optimized
for various different applications. The pint-sized NUC is one of the cutest
yet capable little computers, certainly Intel’s best-ever offering in this category.

Our thanks to Intel
for the NUC sample.